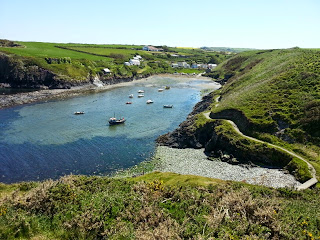 Liz and Rachel had children to attend to at home, but the remaining eleven of us headed off to Porthgain in the school bus to complete this year's coast path adventure.
The weather remained perfect - cloudless and warm. We didn't need to rush. Today we were to cover all of 8 km (5 miles) in two and a half hours, so time could be spent admiring the remains of the old brickworks and lime kilns, this being an area where much quarrying took place between 1840 and the 1930s.
There's also a bright white phallic tower on the headland beyond Porthgain, and further on, a stone circle at Aber Draw has the aura of a recent construction.
Elevenses were taken beyond here, at the site of some ruined buildings. A seal swam along the coastline below us. A little further on, choughs were nesting in caves and crevices whilst a pair of Canada geese explored an inlet as if on their summer holiday.
Fulmars and cormorants were also in evidence, amongst many other species, some of which have been referred to in earlier postings.
Today's cliff tops were swathed in bluebells as well as the usual Thrift, Sea Campion and Spring Squill. They were also adorned in places with a robust form of Red Clover and giant Foxgloves.
Cattle were huddled into shady corners of their fields and all too soon we were huddled into a shady corner of Abercastle, waiting for the school bus. It was half an hour late; the driver got lost!
No matter, we enjoyed the moment before returning to Treleddyd-fawr and dispersing or staying on for more sun by the seaside. In our case the former - we dropped Andrew off in deepest Cheshire before getting home by 8 pm.
What a lovely trip. We'll try to upload a slide show before we head off again.
Today's picture was taken on the final descent to Abercastle.
Posted by Phreerunner at 22:01 No comments: 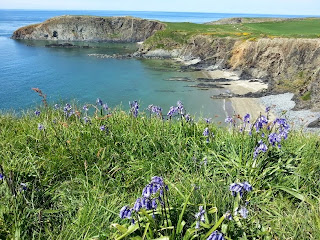 Well, not quite Whitesands Bay. We started from the cottage at Treleddyd-fawr and headed back along the lovely heathland path to rejoin the coast path at Penlledwen.
Another wonderfully sunny day saw us yet again admiring this route at its very best.
Out at St David's Head a homing pigeon befriended us.  Soon afterwards, after passing through orchid meadows, we came upon a tame kestrel. Nearby, after we'd passed through a corridor of tormentil, cowslips,  birds foot trefoil, primroses and bluebells, we watched as a gannet caught its lunch.  Spectacular.  A buzzard glided overhead whilst choughs and oystercatchers argued in the bay far below.  Black redstarts cackled at us from their viewpoints in the gorse. We failed however to spot any seals.
Meanwhile, the burning sun blasted us from an azure sky. Much sun tan cream was required. Miss Application ruled ok - everyone has red bits.
A great black-backed gull toured the coast line. We watched through a haze of bluebells as it glided past the spectacular cliffs.
Lunch was taken near Aberdinas, then we eschewed Abereiddy in favour of Traeth Llyfn (pictured) where the two Sues and Liz enjoyed a swim.
The Shed at Porthgain provided a fitting end to the day by way of Cornish style cream teas for everyone. Then an old school bus appeared to deliver us back to Treleddyd-fawr, where we later reassembled for an evening of international cuisine and debate.
What fun! About 18 km in not much less than 8 hours was today's impressive tally.
Posted by Phreerunner at 22:32 4 comments: 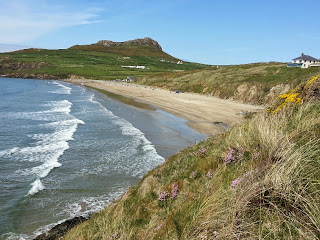 Another perfect summer's day found all thirteen of us back on the coast path from St Non's to Whitesands Bay (pictured).
We somehow managed to rendezvous at St Non's from our various lodgings, and once again we admired the artefacts and the stunning coastal views.
Stonechats chatted in the gorse and jackdaws swooped and glided within the coastal inlets. A gannet floated uncertainly over the churning waters of Ramsey Sound and several parties of kayakers.
Ox-eye Daisies dominated the verges of the path for a while, with Gorse and Thrift providing a panorama of yellow and pink. Heath Spotted Orchids and Common Star-of-Bethlehem had managed to colonise some damper areas.
Lunch was taken overlooking the Lifeboat Station at St Justinian. Swimming at Porthselau provided a diversion for Sue, Rachel, Liz and Sue, whilst the rest looked on as they shivered in the icy water. A more inclusive activity was the purchase of ice creams for most of the party from a kiosk at Whitesands Bay. Then we continued to Porthmelgan before heading up to Carn Han and on to the rented house at Treleddyd-fawr for tea and cake.
The others stopped here, after 19 km in a good 8 hours, but while Andrew and Sue got a lift back to Y Gorlan, I explored some inland paths for another 6 km of late afternoon pleasure. They were little used and a trifle boggy, but very enjoyable.
A quick turnaround saw us back at Treleddyd-fawr, this time for a barbecue and a convivial evening amongst friends.
Posted by Phreerunner at 23:21 No comments: