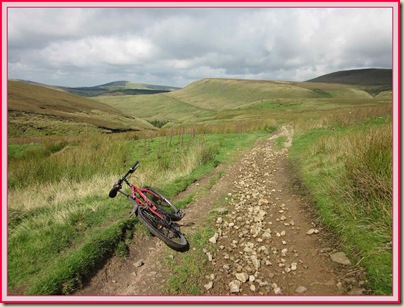 It was a pleasure to be back on the old boneshaker today, for a two hour buzz around this familiar route.  Despite some rain, the sun did shine as I was passing Sparbent on my way down the rocky path towards Wildboarclough.

Whilst suspension may be nice, this bike is lighter and more manoeuvrable than The Tank.  I should have had it serviced and taken it on the Transalp trip.

I tried later to remove some of the accumulated grime, as it’s being serviced tomorrow*.  I got very oily!

* “The steel frame will last for ever” said Joe, when I took it in to Bikeshak.  So it’s a refurbishment, with some welcome advice - “full mudguards, and a new chain every six months, would be a good idea.”  So, am I still dreaming of a new bike?  Perhaps not.

Posted by Phreerunner at 21:31 No comments:

The local farmers were busy with their late summer activities as I started through the pretty village on an amble that had a final destination but no other plan. 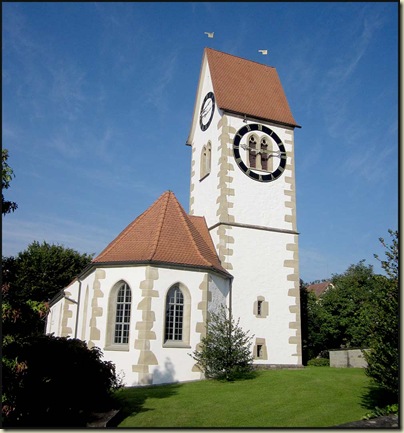 The farmers of Knonau are cashing in.  Much of the land in the village seems to have been sold for housing.  Apartments for rent in large grey buildings.  Stamford Brook (in Timperley) on a grander scale. 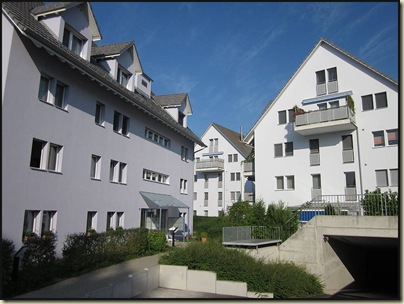 Following the smell of freshly cut grass, and using an excellent 1:25000 scale map, resulted in the squares on the map passing quickly by, despite today's lack of pedal power.

I passed signs asking for information about missing cats; buzzards wheeled overhead; some say the two are linked by more than just their mewings.

Past the evidence of a good maize harvest, into green woodland not yet touched by Autumn.  Here, the distinctive yellow flowers of Touch-me-not were rampant, making a change from the Himalayan Balsam we endure at home. 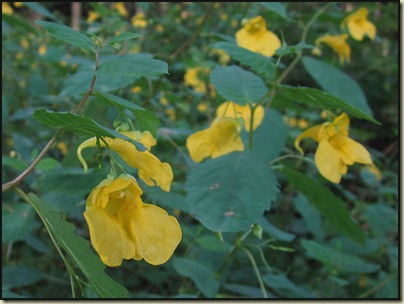 The woods were full of fungi – here’s a Polyporaceae (perhaps Trametes versicolor). 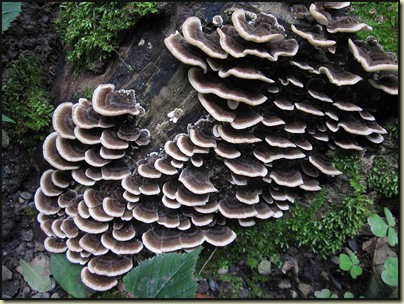 Vaguely following a roundabout route towards Cham, I passed through the small hamlet of Niederroil, with its neatly rendered church and its quaint wooden houses. 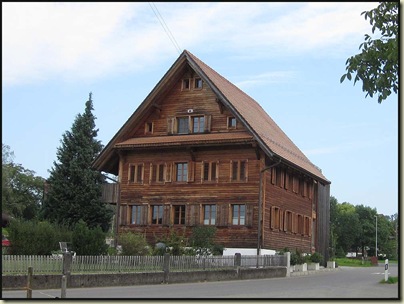 Further on, past apple orchards laden with fruit, there was lots of ugly building work and roadworks at Hogendorn/Rumentikon, rendering my dogleg to that small town obsolete from the scenic angle.

Down by the River Louxe, a pleasant pathway led all the way to Cham.  The tree-lined river bank was in fact an arboretum, with a huge water treatment plant on the other side of the path.

Big fish swished against the current in the area of a large paper mill below the smart Reformatory Church of Chan. 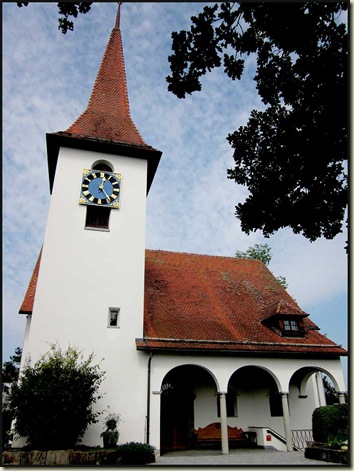 It was very pleasant by the foot of Lake Zug, where I luxuriated on the warm, sunny day, watching the workers as they snatched a quick break beside the calm waters, looking across to nearby mountains that were faint on the horizon due to the haze. 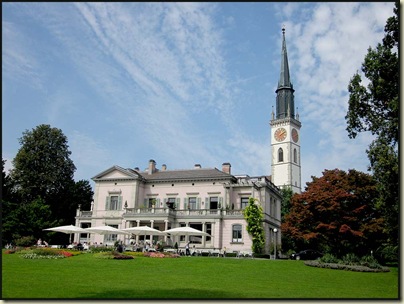 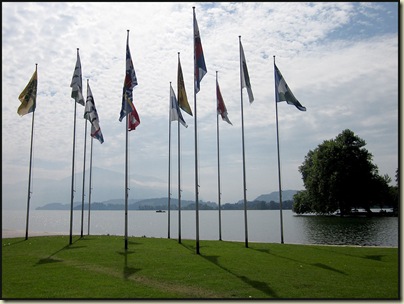 Lots of information boards detailed the history of the area and its industrial heritage, but I understood little of the (Swiss?) German script.  An unkempt garden housed a sculpture - ‘Balance’ by Eva Burkey in 2000. 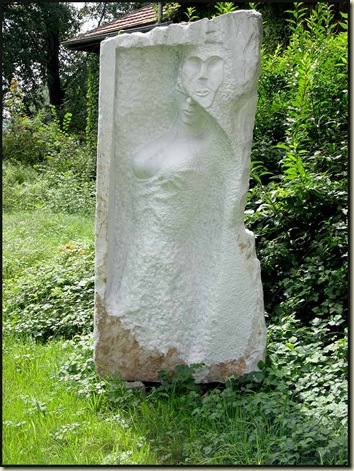 Strolling on past a nudist colony next to a children’s beach, a long line of bike racks led in to Zug, where an impressive building awaited. 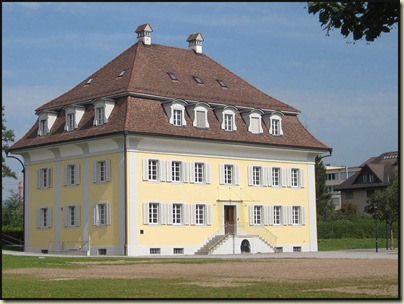 Lunch by a children’s  playground revealed many English voices – there must be a significant ex-pat community around here.

With several hours to go before meeting Nick and Daniela, I headed up a few hundred metres to the Verena Chapel.  Very serene.

Then across to Blasenberg, my high point for the day at around 800 metres (the lake being at around 400 metres).  Farmers were working furiously in the dimming light due to the imminent onset of rain. 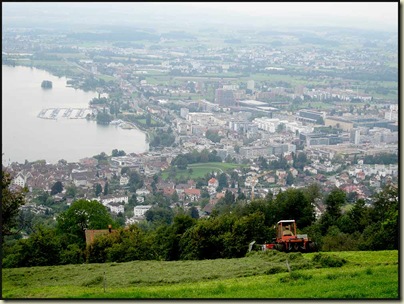 Then back to Zug to wait for N and D, who are having a hard time looking for permanent rented accommodation.  Swiss rules are getting them down.  I was able to people-watch for some time – many English voices, and caged birds - Ibis, Kookaburra, Snowy Owls and many more kept me entertained before we all enjoyed another alfresco meal, albeit dominated by bemoaning of the difficulties of moving from Shanghai to Zug. That’s a shame, because today I had discovered a lovely area full of paths, bike trails and fine views.  It should be a pleasure to live in such a place. 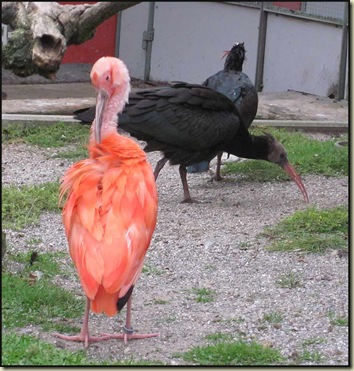 Here’s a Google Earth screen dump of the area.  My wanderings amounted to about 20 km and 500 metres of ascent in a very leisurely 9 hours or so. 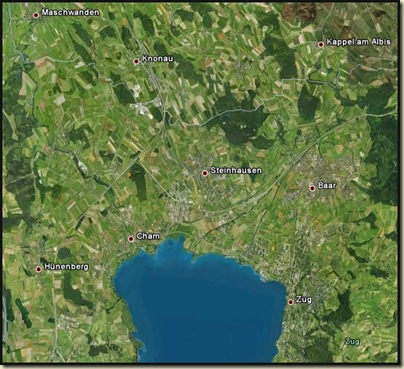 The images above are just a small selection of the many taken on this leisurely stroll.  The rest are in this 68 image slideshow, should anyone be interested.

Posted by Phreerunner at 23:49 No comments: 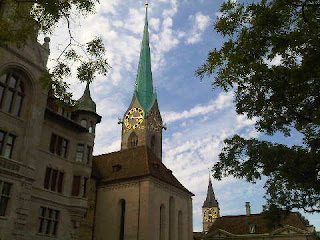 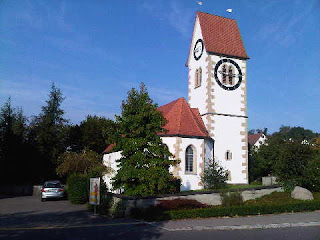 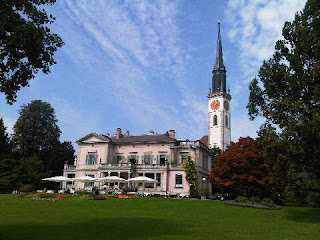 Saturday:
Josef's Ford Transit Estate Van proved an ideal way of transporting us and the bikes to Dornbirn, being rather more convenient than the 'Bike Bus', and cheaper even after paying all his expenses.
It took around 7 hours, then there was the Cleaning of the Bike.
Markus's remains dirty!
A trip back to the pub/restaurant by the Rolls Royce museum yielded an excellent meal of spetzl and salad, then Markus and I were picked up by Jutta (just returned from Thailand) and driven around for a while whilst Wolfie (just returned from his own Transalp crossing and the successful summiting of Gran Paradiso and Castor) pondered the nature of his birthday/wedding anniversary surprise.
Unfortunately he turned out to be not quite as skilled at ten-pin bowling as he is at climbing 4000 metre Alpine summits, but, joined by Ange and Dominic we all enjoyed Jutta's excellent choice of venue.
A very jolly evening.
Sunday:
Leaving Markus to luxuriate in his own company at his flat (ie for a change he didn't have to put up with my snoring), I also enjoyed a good sleep in W+J's spare room. Markus joined us for breakfast and a slide show from Wolfie, then The Tank was returned, shiny but used, to its generous owner.
After 11 days of my non-stop company, it was probably to his great relief that there remained no further impediment to Markus dropping me into Switzerland to enable me to resume my journey at St. Margrethen railway station.
It was a smooth ride to Zurich on a sunny day. Just one minor difficulty - I was nearly two days early for my flight home.
Whilst a stroll around Zurich on a holiday Sunday in the sunshine did pleasantly pass some of that time, 48 hours of such strolling could inevitably prove to be something of an endurance test.
Until very recently, a visit to Nick and Daniela would have involved a trip to Shanghai. Luckily, they have returned to Europe thanks to Nick's success in getting a job with SKINS, who make compression base layer garments and bikewear,
and are based in Zug, just south of Zurich. They live temporarily in nearby Knonau, so I headed out there, armed usefully with Nick's email and mobile contact details. The inconvenience of my arriving just after they had returned from five days at Eurobike didn't show, and we enjoyed an evening of leisure and catching up.
Monday:
No further progress towards Manchester was achieved today. A delightful country walk to Cham and Zug in lovely warm, sunny weather occupied most of my day (see separate posting if I get around to it), before spending another pleasant evening with the Workers, Nick and Daniela.
Tuesday:
A leisurely departure from Knonau in deteriorating weather has returned me to Zurich, and onwards to the airport, where I've failed to succumb to the vigorous Volvo S60 and Honda CR-Z advertisements and am waiting at the gate for the EasyJet flight to Manchester.
I'll be home for lunch!
The images are from Zurich and Cham - I'll leave you to work out which is which...