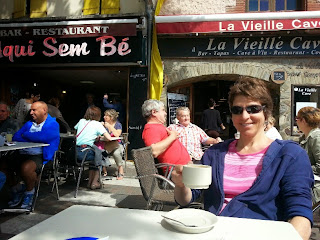 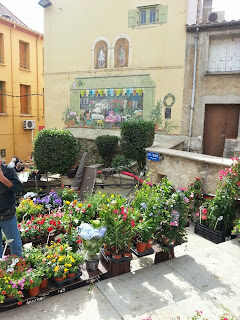 Our last day here. A trip to the market, and lunch by the Mediterranean.
Thanks go to David and Jan for renting us their lovely downstairs gite, and to Al and Hazel and Andrew and Kate for putting up with us (me) for the week.
The sun is still shining.
Next stop - Timperley!
Posted by Phreerunner at 14:22 No comments: 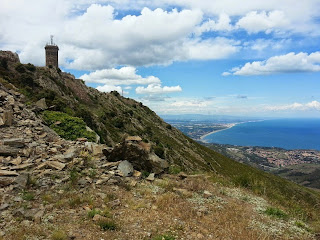 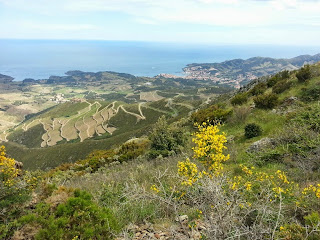 Tour Madeloc is a Majorcan watch tower built in 1285 by James II of Majorca to protect his territory of Roussillon against attacks from the north by the king of France and from the south by his brother, Peter of Aragon. It was renovated by Vauban in the 17th century and is now used as a TV relay station. It's allegedly 650 or so metres above sea level, but my old map shows it as 360 metres! (The download from my Garmin gadget will reveal all in due course. ) It is just about visible from Maison de la Forêt.
Leaving the others to build sandcastles on Argeles Plage, Sue and I drove up a minor road from the high point of which it was an easy walk up to the tower. We passed another battery emplacement dating from the 1880s on the way up.
Today's pictures were taken in the vicinity of the tower.
There were quite a few people about and an abundance of flowers, with lovely views of the coast, from Banyuls to north of Perpignan, and of a fine selection of vineyards.
The path took us south of the tower and on to a short section of GR10, before reaching a col from which a narrow,  contouring belvedere took us all the way back to the start.
9km - a great way to spend a sunny afternoon on the Vermillion Coast, and leaving us plenty of time to enjoy a most lavish barbecue with David and Jan.
I even finished my holiday reading - a funny little book by Catharina Ingelman-Sundberg called 'The Little Old Lady Who Broke All The Rules.
Posted by Phreerunner at 21:48 No comments: 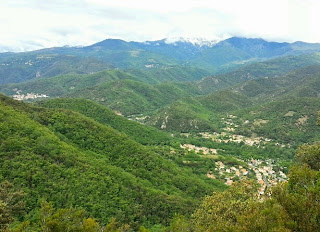 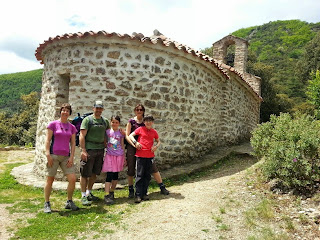 Today, after watching the newly fledged hoopoes being given flying lessons by mum and dad, all six of us enjoyed a 17km circular walk from Amélie-les-Bains in sunny weather that deteriorated eventually to Canigou mizzle.
The walk starts steeply before relaxing to a gentle gradient with good views towards the Canigou massif, which today was engulfed in cloud, pictured top.
The chapel, also pictured, was renovated fairly recently (finished in 2008) and is on a site that affords fine views to the Perpignan coastal area and to the route of GR10, the trans Pyrenean path I walked last year. I did this stretch under a blue sky on day 58, when similar pictures were posted but in rather brighter conditions - not that I have any complaints about today's ideal walking weather.
After lunch at Julio's bench we continued along a well built path past giant bellflowers towards the GR10 path, which we joined before its final ascent over Col de Paracolls. On the way we diverted to a 'Grand Battery' a high point of 887 metres with panoramic views and a well constructed platform from which to carry out the functions of a 'Grand Battery', presumably constructed at around the same time as nearby 19th century forts.
When we got down the steep GR10 descent path - my first time on this particular section of GR10 - we found Arles-sur-Tech to be rather deserted. Sue and I did however find somewhere for a pot of tea, whilst the others dashed off to catch a bus back to Amélie. They were disappointed. It's Ascension Day. The bus wasn't running. So after a bit of faffing they joined us for the walk back to the cars.
A supermarket visit provided another excellent home cooked dinner.
Posted by Phreerunner at 06:35 3 comments: 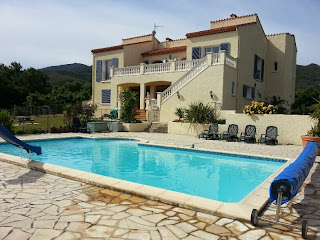 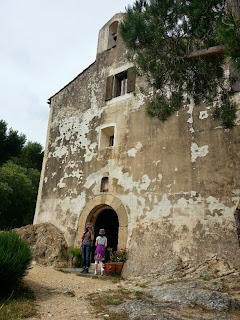 On holiday at Maison de la Foret, there's a short walk up to the small church, Notre-Dame de Vie.
On a sunny day we went up here, and all of us went a little further, the Roberts pairs returning by their routes of ascent, whilst Sue and I continued along the fire track, accidentally bypassing Chapelle St Laurent and making our way down via an interesting cross country route that led finally past some white Arabian stallions, through some vineyards, across a wooden bridge and into a thicket. Beyond the thicket was a large house surrounded by two separate electric fences.
"We'd better go back" I told Sue.
"Hang on" she replied, "that's our car over there."
So we vaulted David and Jan's wild boar defences and returned home for lunch after this 10km circuit. The GPS download of the route will be interesting as I have no real idea of where we went or how we managed to get back to the house so effectively.
Sue and I then enjoyed a relaxing afternoon whilst the others went shopping in Collioure.
Today's pictures are of Maison de la Foret, and Notre-Dame de Vie.
Posted by Phreerunner at 20:24 No comments: 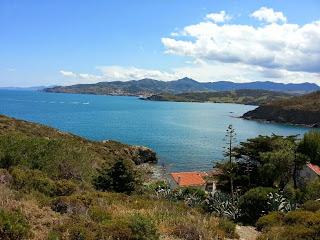 Another most pleasurable day. After a slow start (we are on holiday) we gave up on the trains - principally because they were on strike - and drove to Paulilles.
Paulilles has a rich history. Its rural life ended in 1870 when it was chosen as the location for a dynamite factory, set up by locals with assistance from Alfred Nobel, who had by accident discovered how to make dynamite a few years earlier.
The factory's chequered history ended in 1984, and recently the large site has been renovated and made safe for visitors.
Nowadays 'A Workers' Story' exhibition, compiled with the help of former workers and local associations, pays homage to the inhabitants of the 'Côte Vermeille' who brought the Nobel dynamite factory to life. There's also an outdoor museum in the original factory, with rushing French schoolchildren and scale models of the site and the landscape, the places around the world visited by the dynamite (Mont Blanc tunnel, Panama Canal, Oil exploration sites, etc) and the restored site. The old water tower has been converted into a watchtower, giving a panoramic view of the site and its coastline.
After lunch on the beach we enjoyed a walk along the 'Sentier Littoral' to the lighthouse at Cap Béar. Although it's only a short walk, the coastline path is a swooping switchback affair - a rather more aggressive version of the South West Coast Path. It takes no prisoners, hence the Roberts family's decision to head back to a café a kilometre before reaching the lighthouse. A tough kilometre, as Sue and I discovered. The cliffs are not high, but the relentless steep undulations in hot weather take their toll. Today's picture is taken from the coast path, looking towards Banyuls-sur-Mer and the Spanish border.
On reaching the lighthouse we admired the coastal views and looked up to Fort Béar, built around 1880 and used as a defence post until 1914. Unlike many of these 19th century forts, this one is still in use - as a commando training centre.
In the distance, we noticed loads of fresh snow on the Massif du Canigou. Apparently it is usually pretty much clear of snow by this time of year, so the Pyrenees may have experienced another year of exceptional snowfall.
Closer to hand, multi coloured cactus flowers on the steep slopes drew our eyes towards several scuba divers, snorkeling with long rods. The brave capture of a giant starfish was witnessed. Lovely views across the bay completed the picture.
Finally, after some welcome refreshments, it was time to head for some local produce from the artisan shops of Argelès and prepare supper, with the pleasure of David and Jan's company for the evening.
Posted by Phreerunner at 09:03 2 comments: 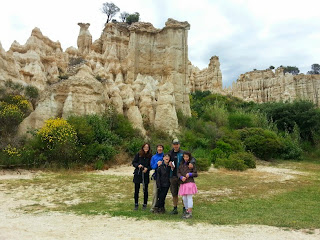 An intermittently rainy day saw us visiting these two interesting locations.
The Orgues, pictured, are an amphitheatre of columns, known as hoodoos, sculpted by erosion. There are areas of meadow at several levels, and black stonechats were enjoying the gorse. There are similar sites in Cappadocia in Turkey, and in Bryce Canyon in the USA, as well as in the Hautes Alpes.
Lunch in the village was followed by an interesting visit to the fortified ramparts of Villefranche-de-Conflent, with its long history and exceptional buildings. A great place to visit. There's also a fort, accessible via 734 steps, which would be worth visiting, and it's the terminus of the 'Train Jaune' which crosses the GR10 route near La Cabanasse.
Welcome hot chocolate etc in Café le Canigou preceded a rainy drive home.
All the locations mentioned in this week's short daily reports will be exposed in more detail in a future slide show.
Sent from Maison de la Foret
Posted by Phreerunner at 20:39 No comments: 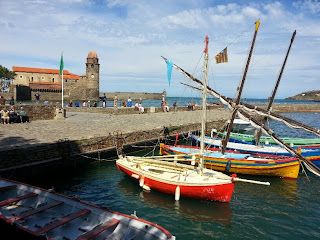 We are on holiday with Al and Hazel and Andrew and Kate, staying at David and Jan's lovely gite, Maison de la Foret, where they occupy the top floor and welcome visitors to stay in the immaculately equipped lower floor. Some readers may recall that we met David at the start of our GR10 trip last year, and I stayed here after I finished that walk.
Today, in steadily improving weather, the six of us strolled down past hoopoes and broomrape to Argelès-Plage and on to the port for lunch.
A stunning collection of photos,  mounted on large information boards, formed the 'Explosion de vie exhibition' beside the path between the plage and the port.
The afternoon was spent on the coastal path - European Trail E12, Arc Mediterraneen, no less - to the tourist trap of Collioure (pictured), where we all enjoyed excellent ice creams in the sunshine and were entertained by a large group of mountain bikers who arrived in convoy and proceeded to dunk themselves rather entertainingly in the Med.
Sue and I then walked most of the way back, past a series of bare busoms, by an alternative route involving some woods, on a day on which we ambled around 18 km. (We did bus it between Argelès Port and Argelès village.) The others returned from their 12 km walk by taxi as there was a train strike.
Good food and wine and boules, etcetera concluded a most enjoyable and relaxing day.
Sent from Maison de la Foret
Posted by Phreerunner at 21:20 No comments: 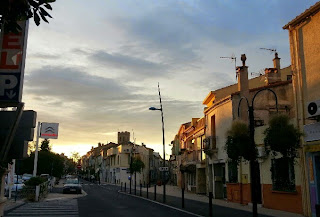 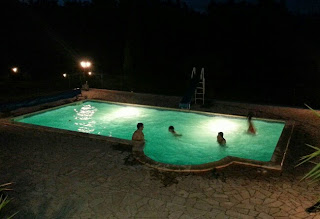 Thanks to Flybe's failing baggage counting and aircraft computer systems our arrival here was a little later than expected.
The supermarket had shut but luckily a local pizza shop (which I stood outside for the top picture) produced some excellent dinner for us, then certain members of our party took to the pool in this delightful location, about which more later.
Sent from France
Posted by Phreerunner at 08:25 No comments: