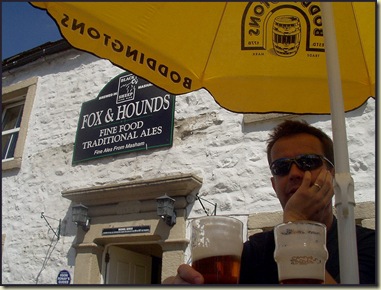 Memories of summer (an aside)

Aktoman's blog is a source of frequent amusement. I have an affinity for Duncan (Aktoman) as I probably copied his idea of naming his blogging identity after a tent. I therefore feel obliged to share with you this offering from Duncan, should you not already have seen it. 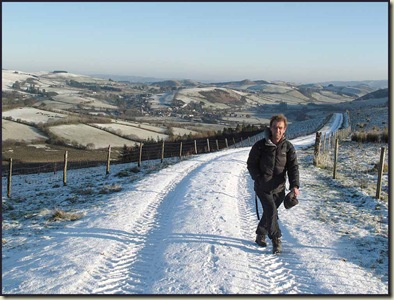 Today's stroll was triggered by an 'I need to go for a walk' message from John last week.  So we rendezvoused in Llangurig, roughly half way between Timperley (Manchester) and Whitland (Pembroke), on a frosty morning, for a circuit over rolling hills and through planted forests on this 'blank on the map' for both of us.

A track sporting a dusting of snow (above) rose from Llangurig, past a sheep farm with objectionably smelly feed, up Pant-gwyn Hill.

We paused to admire a stand of Scots Pine, where the reflected sun and the ground cover had thawed any snow that had stuck hereabouts. 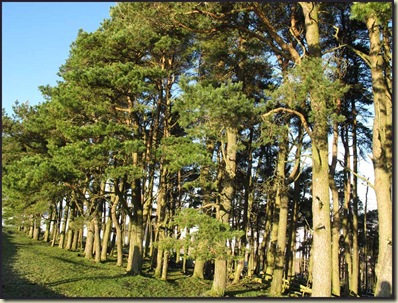 The path faded as we rose to a small summit at 512 metres, before plunging into forest along a marked path that drew us south west to emerge after a while above an expansive view towards the mid-Wales coast. 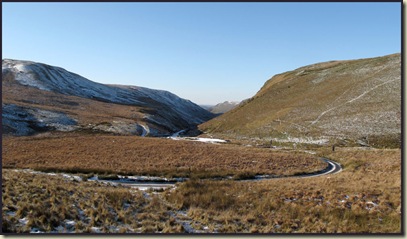 The path down to a minor road negotiated some bog and peat hags, easily avoided by keeping to the frozen verges.  Here we enjoyed elevenses by a Welsh Water information board that explained that we were at Blaen y Cwm, the northern tip of a tranche of 70 square miles owned by Welsh Water since around 1950. Welsh Water claim to be saving the natural wildlife and beauty of the area for the public.  This, on the one hand, involves a ban on camping, and on the other hand the information board displays a plethora of engineering works and despoiling of the countryside which is deemed quite acceptable.

I acknowledge that such projects may be necessary to supply water to the cities, but why they should be accompanied by draconian restrictions on harmless activities like (responsible) camping?

Turning immediately away from the road, we headed over Craig Lluest.  Only a short step on the map, but steeply up to a zone of deep tussocks... 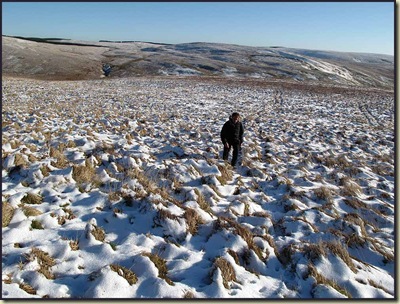 Beyond the tussocks a frozen flooded track led back into the forest, much of which had been felled since our maps had been surveyed.  Silent windmills under the clear blue sky seemed to have been planted in place of the felled trees. 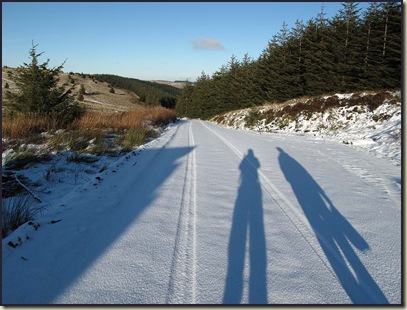 Continuing along forest tracks we noticed they had been prepared for a motor rally - Wales Rally GB, the final round of the FIA World Rally Championship.  A couple of official cars passed us, but luckily we were allowed to continue on our way.  As I write this, two days later, I discover that stages have been cancelled due to ice!  Health and Safety rules get everywhere, it seems!  The tracks looked quite driveable to me. 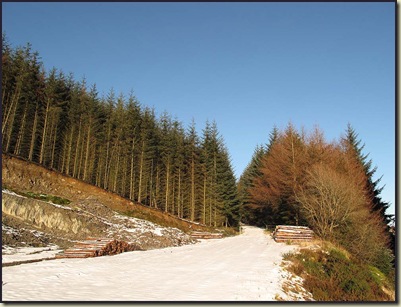 As we descended down the north side of the forest, into the Wye Valley, we lost the sun and it cooled significantly.  It was probably below freezing point all day.

Beyond Nanty we met this friendly donkey with a very thick fluffy coat.  He took quite a shine to John and bawled in distress when we escaped from his field. 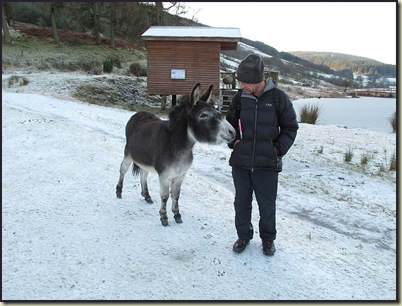 Across the other side of the valley, by the A44 road artery, the late sun continued to beam down. 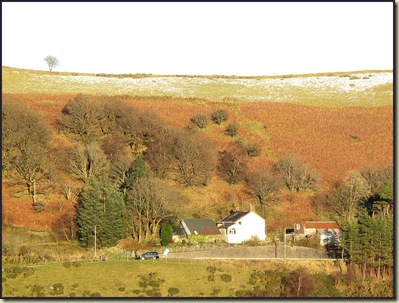 Our route took us past farms strewn with unkempt agricultural debris, and beside the infant River Wye that the local farmers have despoiled with their rubbish.  A new walking route, the Wye Valley Walk, was apparent here.  Luckily, the marsh over which it passes was well frozen today, but normally it could be a very wet experience.  Interestingly, the route cunningly avoids the public footpaths through farmyards and keeps its distance from habitation where possible.

It was calm, and the river views, away from the debris, were fine. 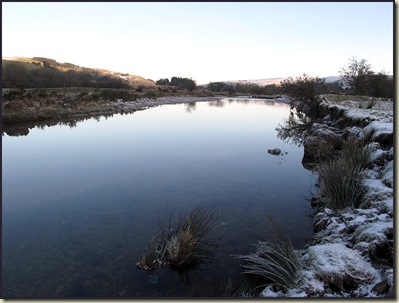 We'd been moving slowly. John was not at his most lively, being stricken with grief following his wife Alison's death last month after a long illness.  So instead of a final hour in poor light on the south side of the Wye on the Wye Valley Walk, we opted for a half hour stroll back to Llangurig beside the A44, which was mercifully free of traffic.

There's a fuller photographic record of this walk, viewable as a slideshow of 26 images - here.

Here's an outline of the 22 km route, which involves 700 metres of ascent and took us just under 7 hours, including breaks of well over an hour. 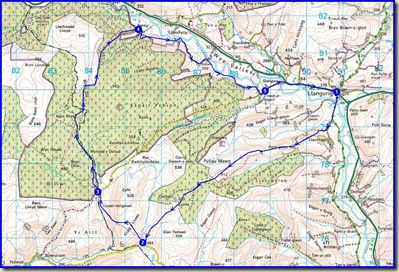 Today I used the Hi-Tec Altitude Ultra boots given to me by Darren on Saturday.  First time worn outdoors, with trainers in my day sac in anticipation of 'rubbing' problems (new boots often irritate tendons in my ankles).

Were they comfy?  Well, I noticed that they were still on my feet at 8 pm after a 3½ hour drive home (thanks in part to some idiots failing in their game of dodgems on the M56 motorway).
So, yes they were comfy.  Very comfy.

The King of Rome

Returning to my entry on 21 November following the June Tabor concert, I hope you enjoyed the video - 'The Band Played Waltzing Matilda'.

Another of my favourites from her Anthology album is 'The King of Rome', a true story about a racing pigeon that for some reason never fails to bring a tear to my eye.  I've not found a version by June on u-tube, but here's a version by Dave Sudbury that I hope some of you may enjoy.

Posted by Phreerunner at 16:00 No comments: 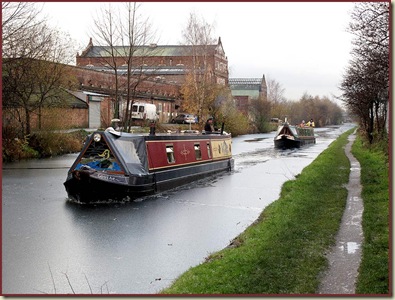 She's called Louise, pictured above passing Altrincham's Linotype Works, and below on the long straight section of the Bridgewater Canal between Timperley and Sale. 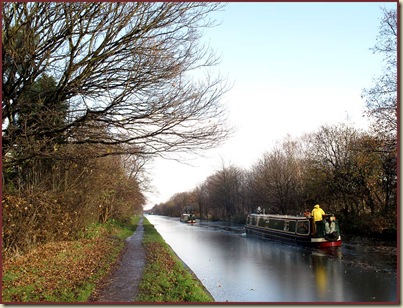 It's unusual to see the canal frozen with no rubbish on it, so it must be 'freshly frozen'.  The ice was about ½ - ¾ inch thick.  It seemed like more, as the towpath had the same coating and cycling through it was somewhat laborious.

The moorhens and mallards seemed to have the conditions pretty well sussed, but weren't their feet cold?

Winter has most certainly arrived - the weekend's icy weather seems to have persuaded the remaining leaves to drop from our deciduous trees. I thought I was imagining it, but Louise really does seem to have a rather shapely stained glass window at her bow!

Posted by Phreerunner at 21:57 No comments:

The Dishy Pharmacist (aka Nallo Lady) and I headed up the A1 from Cambridge, via an overnight sojourn in Mansfield, to reach Sherwood Forest on a typically cold morning. On arrival we stumbled along, heavily laden with projection equipment, to villa 758 after our usual wrestling match with the giant, but full, car park.

Having arrived earlier than usual, we enjoyed a second breakfast before heading off on a day of activity - to the squash court, followed by badminton, table tennis, snooker, spinning (cycling) for some, and rallying for Stuart and Chris, before most of us adjourned to the swimming pool for a break before dinner. Somewhere in the middle of all this, Peg and Lyn served a sumptuous lunch back at the villa. 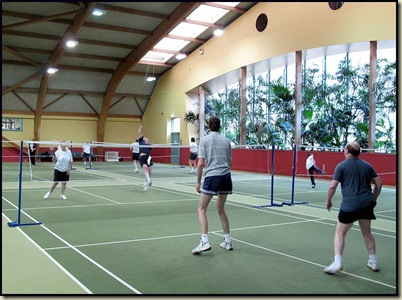 It was cold.  Below freezing point. We were somewhat bemused by Rob's decision to book an outdoor tennis court at 5.30, but it had been paid for, so, after a bit of difficulty with the faintish overhead lights, five of us enjoyed an hour of trying to impersonate Andy Murray.  It was surprisingly good fun.  We only had three balls, so the rotating ball boy roll gave as much exercise as the actual playing of the game.   Here we are - Sue is wearing a down jacket, gloves and hat, but despite other ailments as well, she still managed to outplay the rest of us! 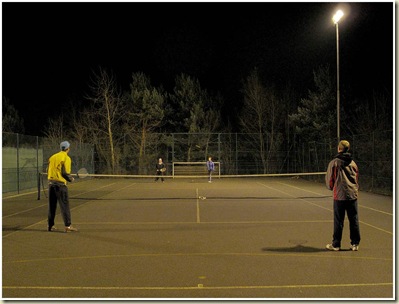 Meanwhile others had been busy in the kitchen.  The balsamic beef and sumptuous vegetable accompaniments were excellent, and the whisky cake (our contribution) that followed was obviously appreciated as it vanished in a trice.

The traditional slide show followed, with our 'Italian Border Route' images being presented for the second time this weekend, followed by our 'New Zealand' show. 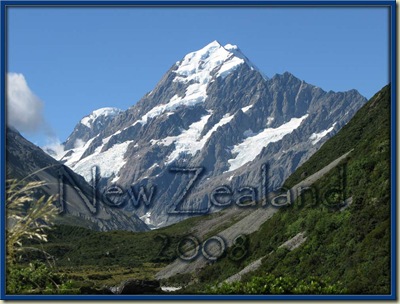 This lot have stamina, having in the past got through Stuart's epic showing of the 1300 images from his historic World Tour.

Well done everyone, we really enjoyed our day with you all.

There was even an interlude for some self-timed photos before we headed off: 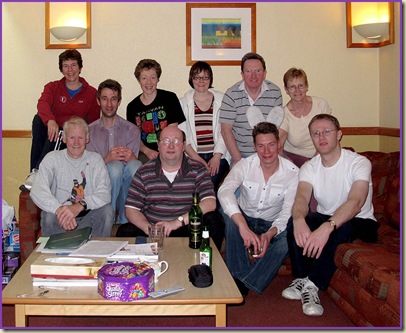 Posted by Phreerunner at 20:42 No comments:

This splendid lunch in Cambridge was kindly organised by Darren and Alan.  It proved to be a very sociable and enjoyable few hours.

Here we are in Don Pasquale's after the excitement of the raffle draw, in which nearly everyone was a winner, supping our last dregs of coffee and trying not to choke on surreptitious mouthfuls of Nallo Lady's specially manufactured CCS. 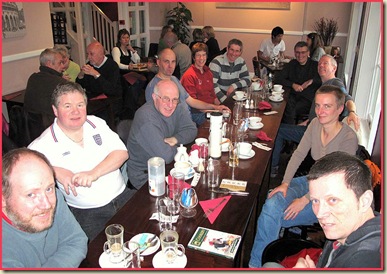 From the bottom left:
Darren's sylph-like figure has just crept into shot;
you can't miss George;
Keith (how sad!) is an avid reader of the authors before you;
Baz is (almost) still waiting for his main course following a 'kitchen glitch;
Nallo Lady is no doubt providing professional advice to
Phil, who after the recent removal of certain body parts is wondering whether he should have brought spare nappies;
Alan is ecstatic about his new work project;
Mick and Gayle are relieved that Mick's new work project only lasts six months,
and Martin is trying hard to escape the headlights of the camera and return to his newly won cookery book.

Interestingly, nine of the bloggers present have applied to take part in next year's TGO Challenge.  Only George has failed to get in at this stage.  He has a long wait to see whether, with a reserve position of 100+, he will be allowed to take part at (very) short notice.

After a brief alcohol free pause, we adjourned to the Eagle, where Darren contemplated some secrets of stove design whilst languishing under a plaque commemorating the achievements of Francis Crick and James Watson at the spot where Crick interrupted the patrons' lunchtime on 28 February 1953 to announce that they had "discovered the secret of life" after they had come up with their proposal for the structure of DNA.

The Eagle retains its so-called RAF bar with graffiti of World War II airmen scrawled in various places around the place.

Sue and I found time to enjoy some nearby galleries (very nice they were, too), though fog obscured the views and precluded any meaningful snapping.

Somehow three cars managed to stay in convoy to get back to Alan's house for an impromptu showing of our 'Italian Border Route' slide show to a few 'hard core' members of this select band. We hope everyone enjoyed it, despite a couple of drooping eyelids. 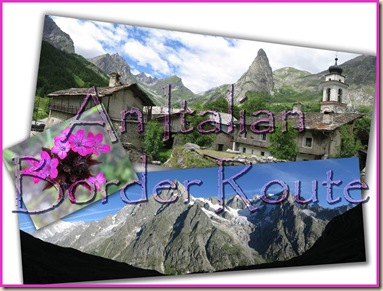 Thank you for your kind comments, Darren.

Thank you also for the Hi-Tec boots that I came away with - very fortuitous that the size 10s intended for Alan were actually US size 10.  Alan is of course English, in whose language these boots are size 9.  My size!  They fitted me, if not very comfortably.  But since getting home I've worn them around the house, using proper socks, and they are very comfy, so I'm looking forward to testing them and will report back in full for Hi-Tec's benefit, or not!