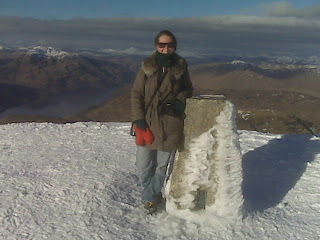 Sent using BlackBerry® from Orange
Posted by Phreerunner at 14:03 2 comments: 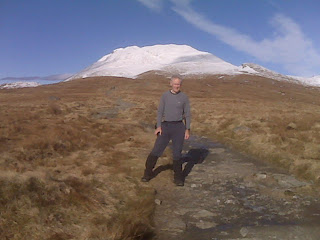 Hello All
I know some of you like these little quizzes!
So which city can I see in the distance today (that's a very big clue)?


Sent using BlackBerry® from Orange
Posted by Phreerunner at 12:27 12 comments:

Labels: Munro Bagging, Scotland, Walks, Where am I now? 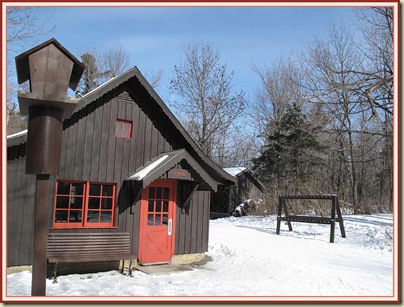 Sadly, this was my last day in Gatineau Park for this year.  On a beautifully sunny Monday morning I yomped around a 16 km circuit from P10 in about an hour and three-quarters, stopping briefly at Huron Cabin for lunch.

I had considered the above photo to be just another snapshot, but Ken assures me it is a proper ‘photograph’, having been deliberately composed to include the chickadee on the bird feeder as its focal point, and to demonstrate the absence of any skis on the rack outside the cabin (very rare).  “I would have placed my red skis on the rack, to show that I was the only visitor” says Ken.  A good point!

Anyway, someone had been there as it was toasty inside, with a roaring fire.  I did my duty and shoved on another few logs, as others would surely want to toast their sandwiches here today, being as it was minus 10C outside, with an icy breeze.

The main trails seemed to me (though I’m not an expert in such matters) to be well groomed today, though #1B was in its usual unkempt state, but had perhaps had its icy surface loosened by the passage of a snowmobile.

The trail up the Khyber Pass, shown below, was lovely and pristine, having clearly (even to my untrained eye) been ‘machined’ shortly before my arrival. 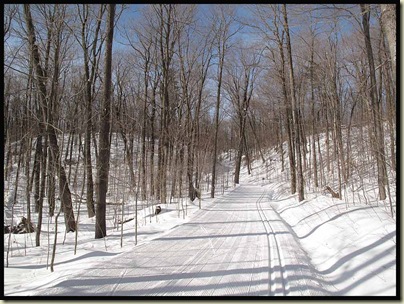 So that’s it folks.  That’s all from Gatineau Park for the time being.  The blue skies have been much appreciated, but tomorrow I embark on a 20 hour journey to get home.

So the next posting will be from Timperley.  Or will it, I wonder?

I can’t finish this without thanking Ken and Helen for their wonderful hospitality, and saying hello to the numerous other friends and acquaintances who have helped to make this trip so enjoyable.

Au revoir – until next year, when I hope that Sue will be fit enough to make the trip.

A Weekend at the Algonquin Eco-Lodge 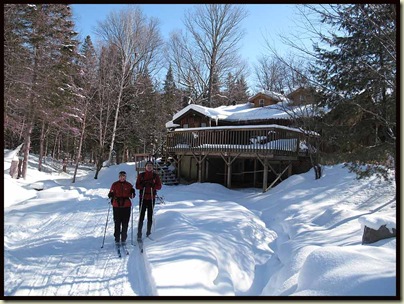 Helen, Ken and I have just returned from a sunny weekend at the Algonquin Eco-Lodge together with five members of OHOC (Ottawa Hostel Outdoors Club) and about 20 other sundry punters.

A fuller report will be added to this posting in due course, and may be of interest to those considering visiting the lodge.

The lodge has its pros, and its Cons.

For the present, suffice to say we enjoyed a pleasant weekend.  The lodge’s accommodation was fine and the food was mostly adequate, as were the ski and snow shoe trails.  The quite well groomed ski trails were rather limited in length, as was the snow shoe route.

Thanks go to Tim for organising the weekend.  Thank you, Tim.