One For The Road 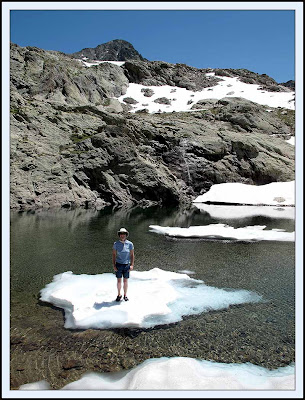 Happy Days in the Maritime Alps - here's a pic that missed the cut a few days ago.

Note that I've now replaced the original image with a better version taken with a proper camera!

Sent using BlackBerry® from Orange
Posted by Phreerunner at 09:23 10 comments:

A Stroll from Tende to La Brigue 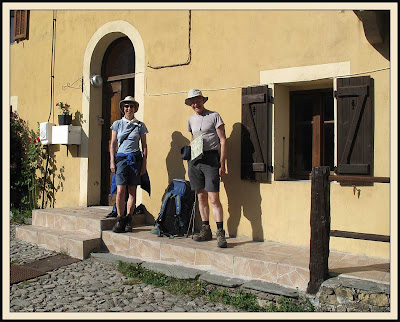 Waking to another bright sunny morning (once the shutters had been opened) we enjoyed a leisurely start on our last day in these hills for the time being.

Our host, Julie, took today's photo outside the gite when we were packed up and ready to leave. You may see (if you can spot it) that Sue has succeeded in preventing further damage to her neck by carrying just a light bum bag. Her neck has survived the trip, even if I did find it a little difficult to keep up at times.

Today's relatively low level stroll was taken very slowly as it was hot, and there were lots of flowers to photograph, starting with masses of Melampyrum nemorosum (a kind of Cow Wheat) and moving on to Red Lily and an assortment of stonecrops, including banks of White Stonecrop.

The path started up from Tende's shady campsite, heading through trees towards Col de Boseila, before which it emerged onto an open belvedere with airy drops and fine views back to Tende and south towards the coast.

At the col we admired Julie's friendly and very placid horses before strolling down the path for a welcome beer in La Brigue, a much smaller and less vibrant place than Tende.

It didn't take long to visit most of the village's attractions, after which we wandered down to the station to catch the Italian train to Ventimiglia. This connected with a French train that in the company of Chris from WA (Western Australia - hi Chris) brought us here to Menton, and a comfortable room with a bath (these things can be important) at the Hotel Moderne.

Menton yields happy memories as it was from here that we started our 'Italian Border Route' trip some three years ago.

Sue has been for a swim in the Med, our dirty clothes are now clean and dry, and we are looking forward to a nice meal in the old town of Menton before returning home in the morning.

So, that's it from the Maritime Alps for the time being. It's a wonderful area, great to visit, and you may be 'quite rare' if you are English. James and Helen are the only English we have encountered since the train to Breil.

We hope to encounter SAHH tomorrow....

Sent using BlackBerry® from Orange
Posted by Phreerunner at 16:54 2 comments:

A Day in Tende 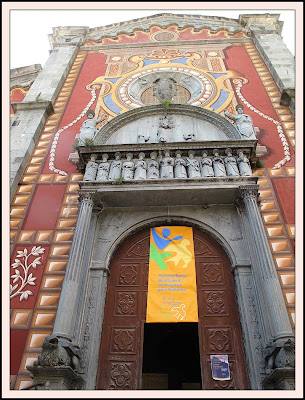 After nine consecutive days of exercise we've taken a day off.

We waved goodbye to James and Helen, who are off to walk the 'Mont Bégo Loop' over the next couple of days*, and then settled into a couple of chairs outside Hotel du Centre and proceeded to fill ourselves with coffee and Danish pastries whilst enjoying the progress of the Fête, to and fro along the main street of Tende. A jazz band, muletiers, various carriages, dancers, and much more, all conducting a full tour of the town before congregating outside the town hall.

We chose the best possible day for our wind down here.

Then we embarked on a tour of the town that I may describe in fully illustrated detail when we get home. Today's picture is of the Collegiale, a church passed on our tour.

A visit to a bar, then to the fine museum of rock engravings, brought us all the way to 5pm, entry time for the gite d'étape, where we could use the kitchen for a most welcome brew, enjoyed from outside the gite with the fine view of Tende from an earlier posting laid out before us in the soft evening light, and the familiar whistles and acrobatics of the resident swifts to keep us entertained.

*J + H enjoyed walk number 22 from Palanfré after leaving us. They even saw a Man Orchid. Hope they have a photo...

Sent using BlackBerry® from Orange
Posted by Phreerunner at 17:14 No comments: 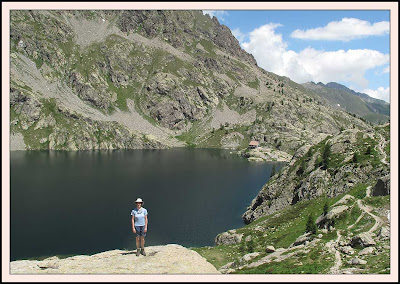 Today we completed the 'Mont Bégo Loop', all the way back to Casterino by 3.45, in plenty of time for the 4.30 bus to Tende.

We slept surprisingly well in the huge dormitory at Merveilles, perhaps because it was well ventilated.

Breakfast was sparse but well organised. "Terrible" commented the organiser of Gilles's trip, on the content of his repast. Plenty of bread, and a decent sized bowl of coffee, but just one little cube of butter and a single mini-carton of jam.

But the setting beside Lac Long Superiore on this brilliantly sunny morning was wonderful. Everyone seemed cheerful as they set off, mostly in large groups, some with guides.

The path led past numerous information boards for the Copper and early Bronze Age rock engravings that date back 5000 years. We lingered to admire the engravings and catch up with our diaries after the turmoil of last night's socialising! Marmots and wheatears monitored us closely.

In rock dominated scenery strewn with small lakes, the path led through fields of spring and trumpet gentians, bright blue amongst the multi-coloured pansies.

Finally, we exited the zone that is protected as a National Monument, and after chatting to a warden who was guarding the engravings I was allowed to reinstate my walking poles for the steep ascent to Baisse de Valmasque, 2549 metres. This was the highest we got today. It has commanding views back along our morning's route, and onwards to Lac du Basto and the ring of jagged peaks beyond.

From here, the ascent of Mont Bégo looks an easy undertaking. I think Susan went up from here. There are apparently great views towards the Mediterranean, especially early in the morning. Perhaps a bivouac near the summit would yield a huge dividend.

Sadly, plan C's time constraints didn't permit us the indulgence of that ascent, and after lingering on the sunny col we descended regretfully towards Refuge de Valmasque, stopping for lunch above Lac Vert (pictured, with the Refuge in the background just above the lake).

Of the three lakes, Basto, Noir and Vert, two were very scenic despite their conspicuous dams, but Noir, the central one, looked rather sad in its half full state.

We called in at the Refuge for refreshments. You are correct, Susan, in conjecting that Plan D could have involved staying there. We didn't enquire, but judging by the number of people we saw today, it may well have been fully booked.

Turning to Alan's comment about this area's perceived likeness to the Picos de Europa in Spain...
Well, it's hotter here, less temperate (ie drier), more Alpine, with perhaps a wider range of flora and fauna, higher mountains, more mountain huts, fewer canals, more towns, better constructed paths, etc, etc. So, I wouldn't really say there's much of a likeness, except that both areas sport wonderful mountain scenery.
Congrats on booking a trip to NZ, Alan, we are sure you'll enjoy that one.

The route back to Casterino from the Refuge started along a narrow and twisting rocky path, eventually passing below some fine waterfalls before ambling along a steadily improving jeep track to join a metalled road for the final thirty minutes of this fine two-day excursion.

We lazed in the sun at Casterino before cruising down the hairpins back to Tende to a frantic Tour de France commentary blaring from the radio of the battered bus. It occurred to us that Casterino would be a fine finishing point for a stage of that race.

Back in Tende, who did we find already installed in Hotel du Centre? James and Helen - no doubt as a result of the recommendation in Gillian's book. (You should get a commission, Gillian!) Thanks to Gillian's efforts on our behalf - Plan C - we were also booked into an excellent double room for €45 for the two of us. Thanks again, G.

We think it may have been one of the last rooms in Tende as this weekend the town celebrates the Fête de Saint Éloi.

So after a welcome shower we adjourned to La Margueria for a leisurely salad and pizza (we arrived early, it would be wise to reserve a table if dining after 7.15), during which the festivities of the Fête slowly began to wind up, with the main action commencing shortly before 10pm.

Crowds gathered in front of the flag bedecked Town Hall. As darkness fell and the birds came in to roost, folk dancers accompanied by a squeeze box (JJ would have been in his element) started the fun. A fire was lit under a pine tree erected for the occasion, and bangers attached to the trunk exploded when the flames reached them.

The crowd was large, but we were tired so went to bed, missing an unexpected firework display that according to Helen was excellent. The explosions were still echoing around the hills as we drifted off to sleep.

Sent using BlackBerry® from Orange
Posted by Phreerunner at 11:17 2 comments: