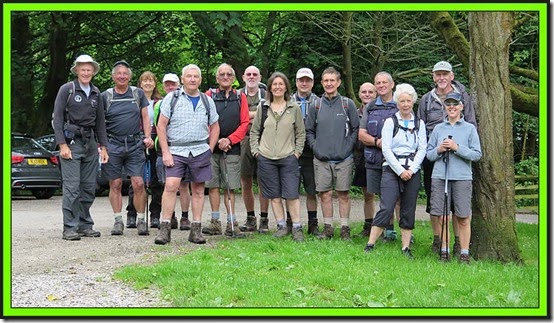 Here's a fine assembly of 'Elite' Plodders from East Lancs LDWA's 'Middle Distance' Section, according to today’s leader, who was most impressed when about 40 people appeared to turn up for his walk. It soon transpired that most of them were on a totally unrelated outing involving a pub lunch – a luxury that even ‘Elite’ Plodders have yet to discover in the wilds of Lancashire.

“I’ve provided a weather forecast for you” announced Norman, looking skywards and pointing to a plaque that he’d just unloaded from his car. 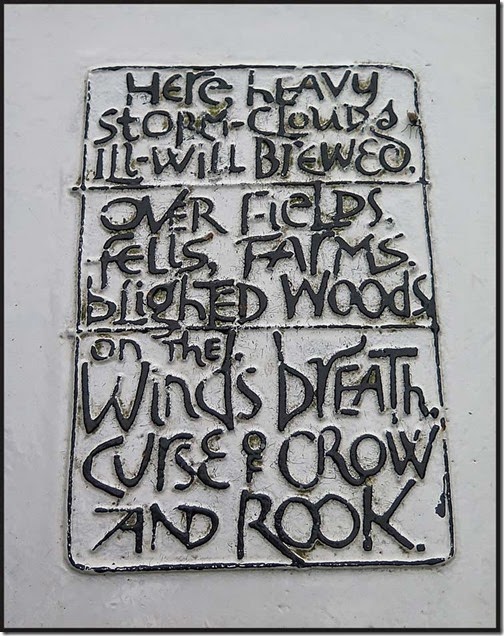 The walk commenced under threatening skies and headed towards those skies, continuing uphill for most of the day, eventually reaching the cloud base. The lush grass was wet. Feet got wet.

The route negotiated frequent stiles, so those for whom Norman’s ‘take no prisoner’ pace was a bit too hot didn't need to worry as it takes a while for 15 people to negotiate such frequent obstacles. 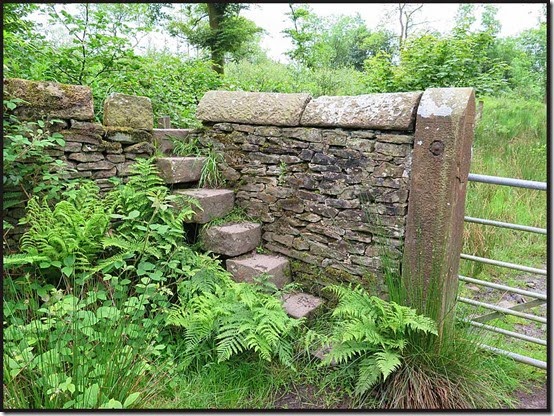 After a seemingly endless ascent to a quarry and a communications mast, a good track led down to the ancient (1296) village of Sabden, past this magnificent piece of industrial archaeology that Norman claimed is in working order. (I’ve been here with him before, and he failed to get it to work – this time he didn’t try, he just pointed at it optimistically!) 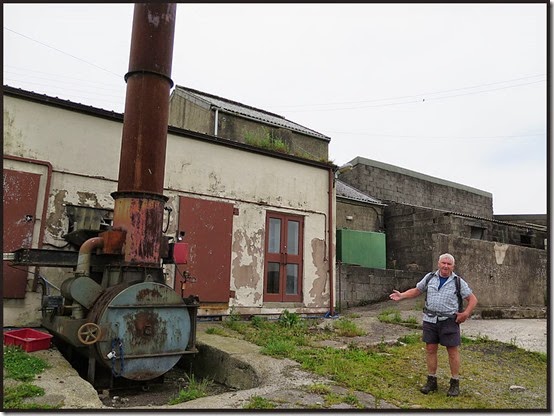 Elevenses were taken at 11.35 "Norman Time" on the benches by Sabden's war memorial. Time for a cake and a chat: "This walk's fine, what a wonderful leader we have." "Yes, I agree, but don’t the brownies taste awful today" echoed from two separate conversations. 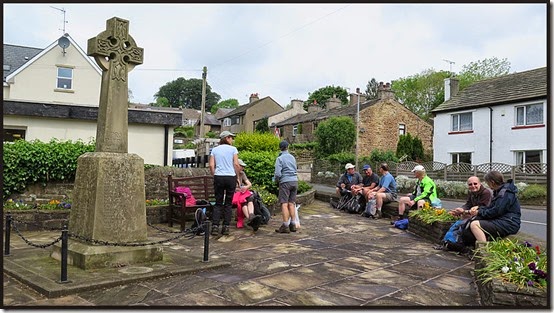 This village was once a hive of industry. The high-quality water in the valley attracted the calico printing industry and Sabden became one of the best renowned places for Calico fabric prints in the UK if not the world. The industry kept going until 1931. At one stage there were seven mills in the village, employing over 2,000 people. This meant many workers travelled to work daily from surrounding towns and villages on foot, many working a 12-hour shift or more. How times change!.

Then we went to church. "If I'd known you were coming I'd have made you a pot of tea" said the church warden... a missed opportunity perhaps. 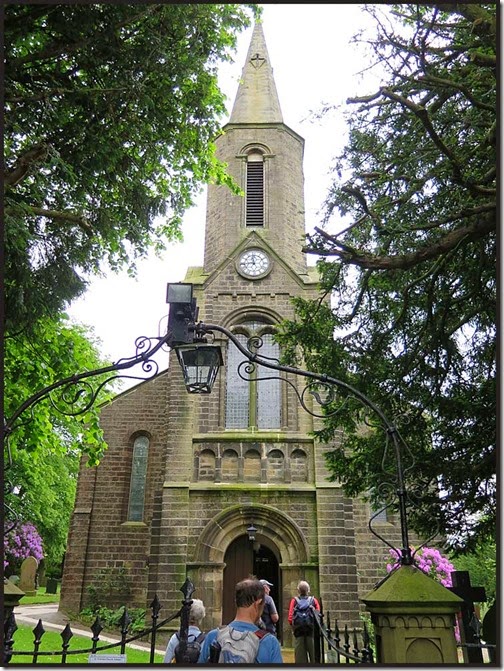 Norman pointed out the brickwork that is designed to shed water. Overall, the impression is that the building is wider higher up, but the individual layers of pointing slant outwards. It has recently been re-pointed as part of two years' of renovations. 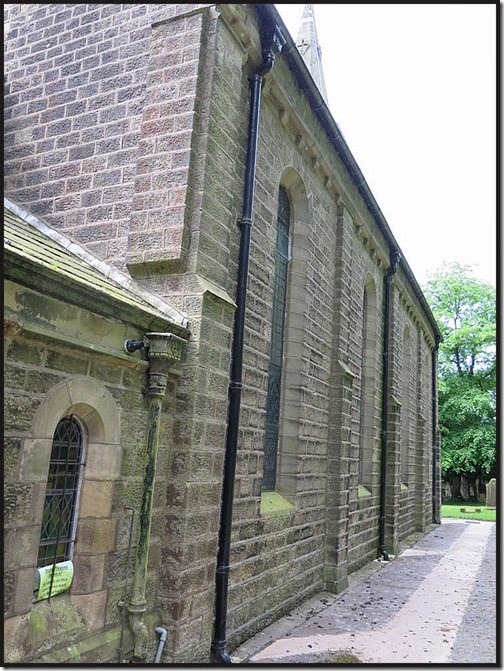 Continuing relentlessly in an easterly direction, beyond Dry Corner, we crossed Sabden Brook at Dean, our far point from the start of the walk. 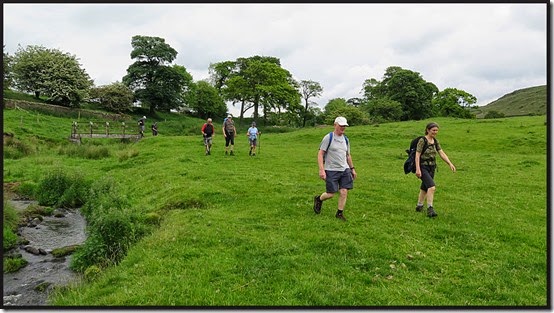 A heron was feeding beside the infant Brook.

There were cheers when Norman led us up to Padiham Heights, rather than up nearby Pendle Hill, the prospect of which several of the more ancient Plodders had been dreading.

After a futile search for some elusive picnic benches, we paused for lunch by Simon's Cross, then Norman set about trying to find out where he was. 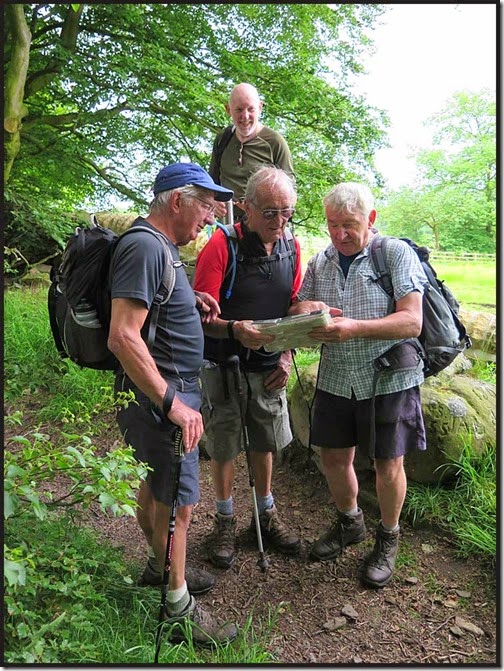 “Perhaps we are near Simon’s Cross” offered Phil. “Are we really?” said Norman and John, who had been too busy eating brownies and listening to the music blaring from a nearby van to be able to concentrate on working out where they were. 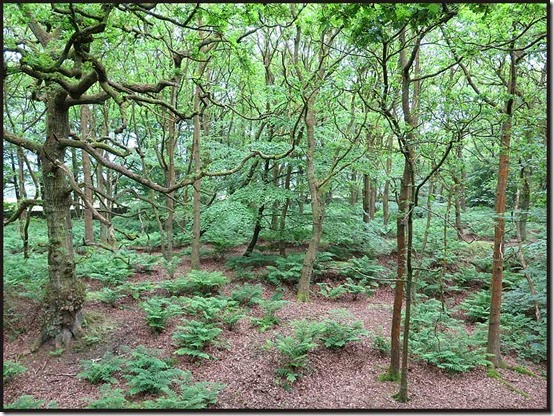 After a while the wood sort of petered out. "Where are we now?" This time Neil was called upon to assist. 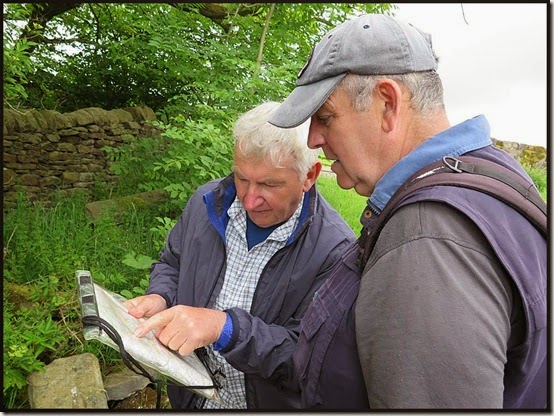 It started to rain as we proceeded through deep wet grass towards the next section of jungle (sorry – “Shady Woods”). The picture below shows what those of us with cameras had to put up with today – flat dull light, just below the cloud base. 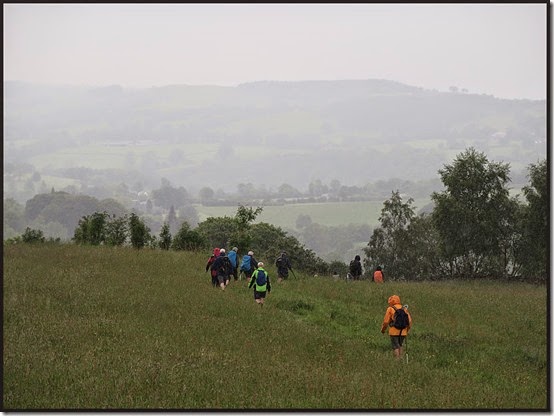 A tarmac lane then led through curlew territory and a long driveway took us to the exit from a stately home - Read Hall. We didn’t see much of the Hall, but our incredibly skilful leader, despite some opposition from those who misunderstand the ethics of ‘Middle Distance Walking’, led us inexorably to Read Garden Centre. This welcoming haven from the now heavy rain provided welcome shelter as well as tea and cake. Everyone except The Dissenters was very happy. 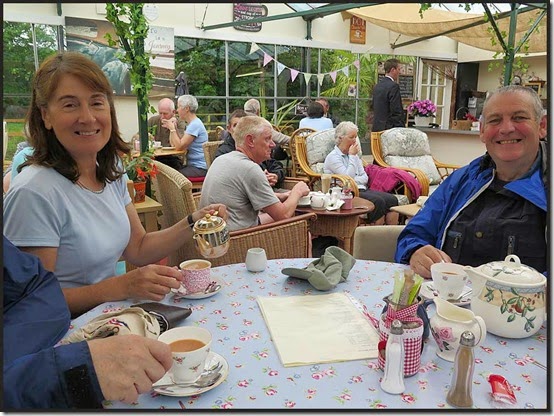 The rain eased after a while, so Barbara woke Norman from his slumbers (did she really spike his coffee?) and the motley crew reassembled for the dangerous stroll to Cock Bridge (widened in 1921) - the route to the Gamecock.

Having survived the busy road to the Garden Centre, we crossed the A680 towards the Gamecock. But instead of dropping in for a beer, our short sighted leader perhaps wisely stumbled on in the rain, beside the River Calder, towards Whalley.

A tributary crossing had some of our rather elderly patrons worried about slipping and drowning. 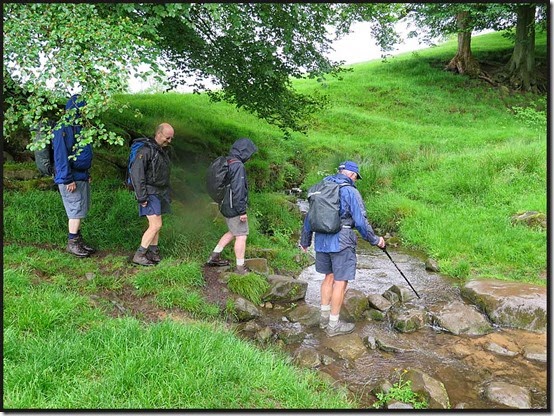 Beyond a zone of trees almost as ancient as the average Plodder, Whalley Banks ensured that the uphill theme of the walk was maintained to the end. We passed a posh house, Whalley Banks Farm, with an osprey outside and the river now far below us.

Backmarkers had to hasten to keep up. Norman takes no prisoners and was miles ahead by now, so had to be reminded that his acceptable ‘attrition rate’ is 10%, not 45% – the current proportion of his group that had ‘gone missing’. 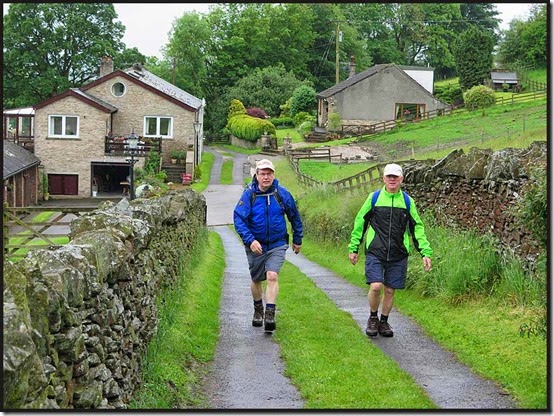 We gradually re-grouped after Neil had wisely tethered Norman to a gate, whilst the rest of us caught up along some of the lovely ancient walled byways around Whalley. 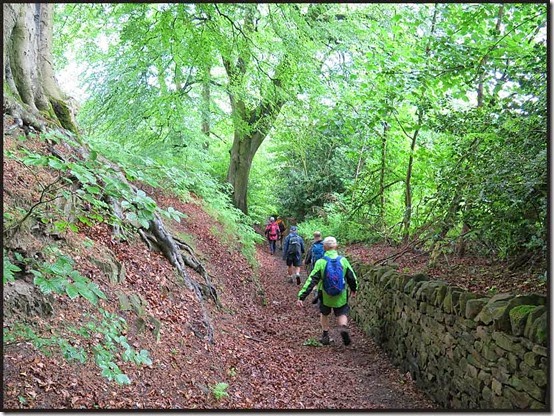 "This looks tempting" announced Norman, as we reached his favourite crossing over the River Calder. "Silly man" quacked the mallard, as he set about walking the plank. 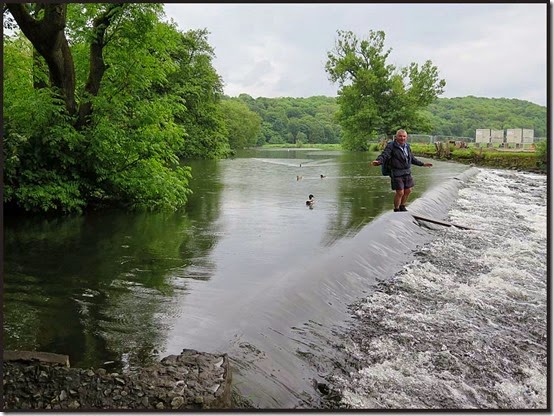 Anyway, we fished him out and dusted him down, so that even he was able to enjoy buying some ice creams for his rescuers back at Spring Wood Car Park. Thanks Norman. 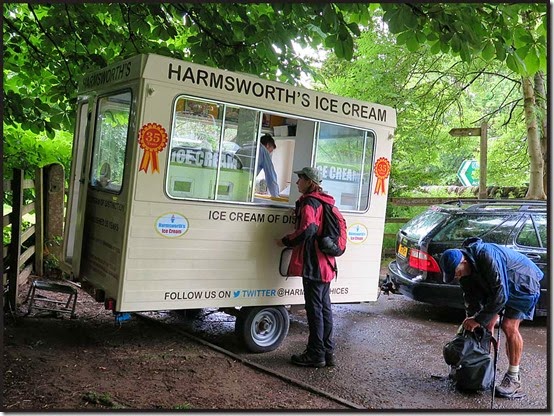 Here's our route - 20 km (12.5 miles) with 500 metres ascent, taking nearly 6 hours including 1 hour of breaks. Click on the image to get a larger version – the start and finish is just under ‘PC’ below the ‘y’ of Whalley (I have new mapping software that I’ve not yet mastered). 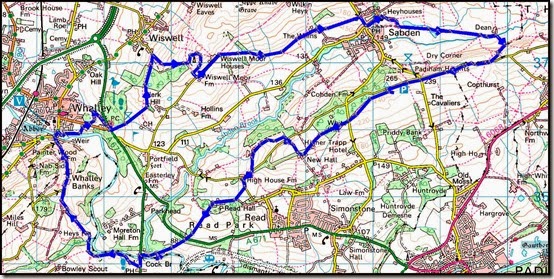 Then some of us finally made it to the Gamecock Inn, where Norman kept repeating Julie’s parting comment - “The walk was 100% excellent and you get full marks.” He’s possibly still there…

There’s a slide show with more pictures here. Any discrepancy regarding the captions is purely accidental and should be regarded as ‘reflections on a splendid day out with the Plodders’. 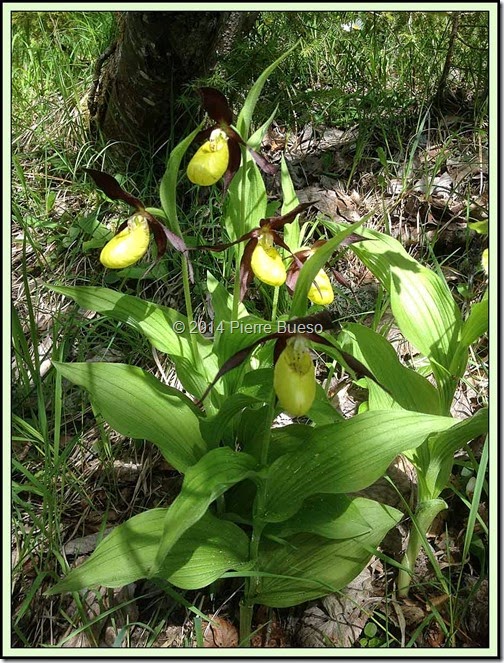 Whilst in the Pyrenees last week, Sue demanded that I discover where to find some Lady’s Slipper Orchids. “Pierre was born and bred in the area, so he should know”, she suggested.

A message to Pierre found him ‘drinking a coffee in front of Big Ben’, from where he reported:

“Concerning your orchid, (the French name is "Sabot de Venus", the wooden shoe of Venus...) I know there are some places in Pyrenees where they are found, but I have not seen any of them.”

But he did know that when he got back home he could find a marvellous area of orchids in the Aravis, in Manigod, where they flower in May.

So, on return from the excitement of London, Pierre and Yolaine went up to Manigod on Sunday and took the pictures featured in this posting. These show that the ‘Sabot de Venus’ is alive and well, even on 1 June. The lower picture usefully shows the size of the plant, which grows in woods and grassy clearings and slopes, usually on calcareous soils up to 2000 metres. They can be found as late as July, when I once found them in the Dolomites. 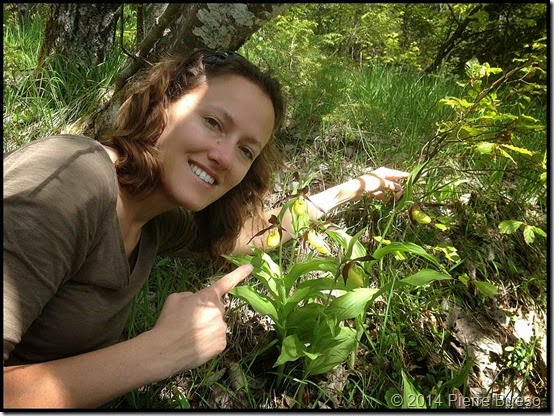 Thanks go to Pierre and Yolaine for providing these lovely photos and brightening a damp day in Timperley.

I enjoyed another great night out at Eagley Jazz Club in Bolton, where the fully booked ‘Charity and Hot Buffet’ night with The Chicago Teddybears Society Jazz Band, proved to be really good fun. Apologies for the poor quality of today’s photo (I prefer landscapes).

The band put on a great show of Trad Jazz, and I again commend a visit to the very friendly Club. There was a very good turn out of the local Long Distance Walkers Association’s ‘Plodder’ sub group – well done folks.

The link above provides a full programme, and the next four gigs are as follows:

Members £5 (membership is less than £3), non members £6 – a good night out guaranteed

Posted by Phreerunner at 19:25 No comments:

Back on the Trans Pennine Trail 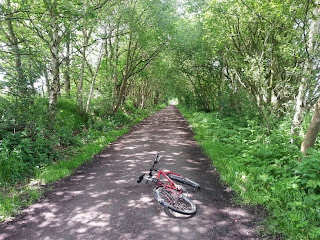 It's all very green in South Manchester. Perhaps there's been a shower or two.
The picture was taken today on the Altrincham to Lymm disused railway line.
Sent from Timperley
Posted by Phreerunner at 17:27 No comments:

The Grand Union Canal at Knowle 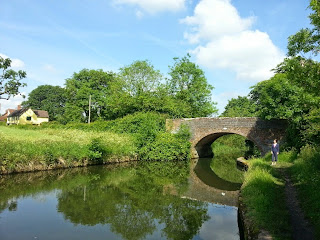 On a short Sunday morning stroll with Sue in lovely weather before her mum's 75th birthday  party.
Sent en route to Timperley
Posted by Phreerunner at 12:20 4 comments: