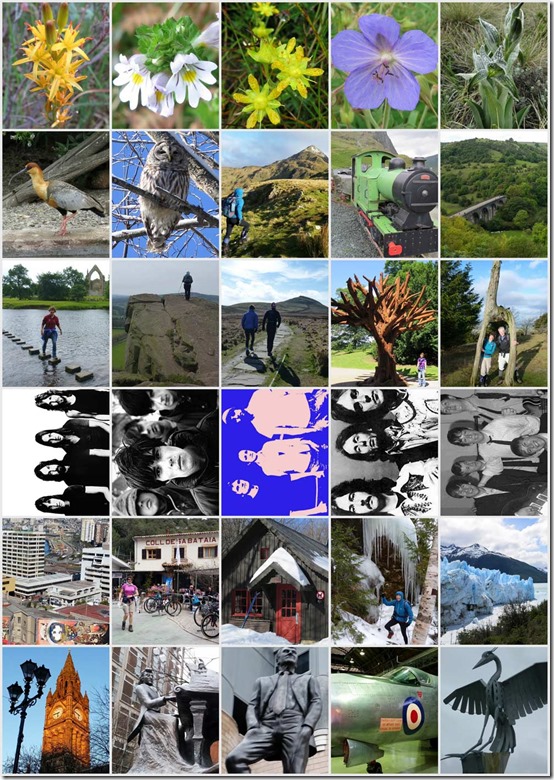 I promised this earlier. (Click on the image, or here to get a larger version that you can ‘Save as’ and open in a version, eg in Picasa, that you can magnify.)

Just for a bit of fun, some readers may like to see how many of the above pictures they can identify. If I get ten comments, I’ll provide the answers….

Line 2 - Name the birds, the mountain, the pass and the viaduct

Posted by Phreerunner at 12:39 No comments: 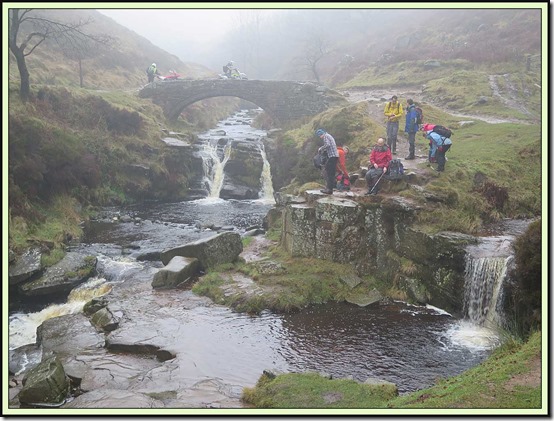 The sun was trying to emerge as we passed through Macclesfield, but the Cat & Fiddle road had a different agenda. We spent the whole day in variable amounts of cloud and rain, despite a favourable forecast.

Eleven of us met at Derbyshire Bridge, from where Sue W led us south, past noisy but largely hidden red grouse, eventually arriving at Three Shire Heads amongst a flurry of walkers, cyclists, and trial bikers. 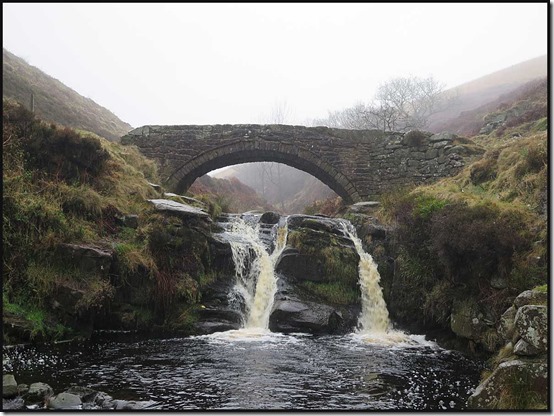 Elevenses turned out to be ‘twelveses’, or should that read ‘noonses’? Anyway, Sue’s box of CCS was soon depleted. At this point the rain intensified. Waterproofs were needed. 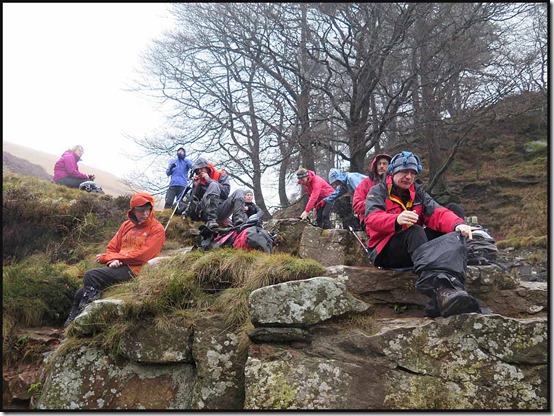 Soon it was time to cross the bridge and head up a sometimes muddy path to gain the Cat & Fiddle via the Dane Valley, where a dipper added colour to the scene, and Danebower Hollow. 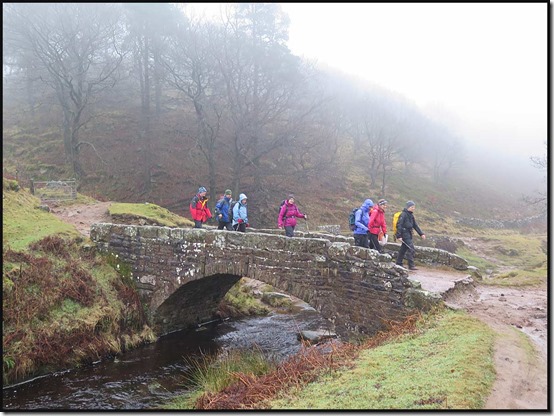 The Cat & Fiddle remains sadly closed, with Robinsons still looking for a suitable tenant, so lunch was taken outside the pub, where a picnic bench served its purpose.

A couple of wimps headed back down the road to their car from here, but the rest of us enjoyed the path towards Shining Tor before turning down to Stake Clough and on to Goyt’s Clough beside the infant River Goyt. Even in the mist this was a pleasant route. 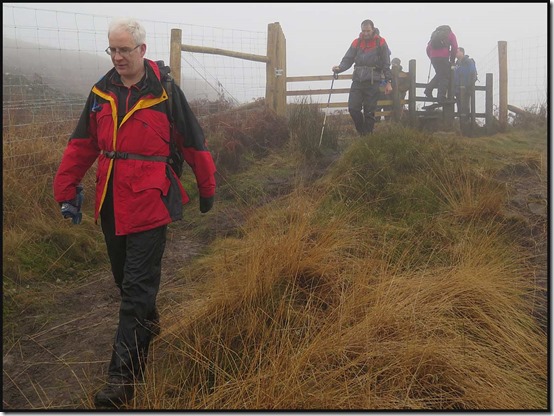 We finished reasonably early, before 3 o’clock, giving us a leisurely winter’s afternoon before popping round for dinner and Rummikub with Mike and Sarah in Northern Moor. 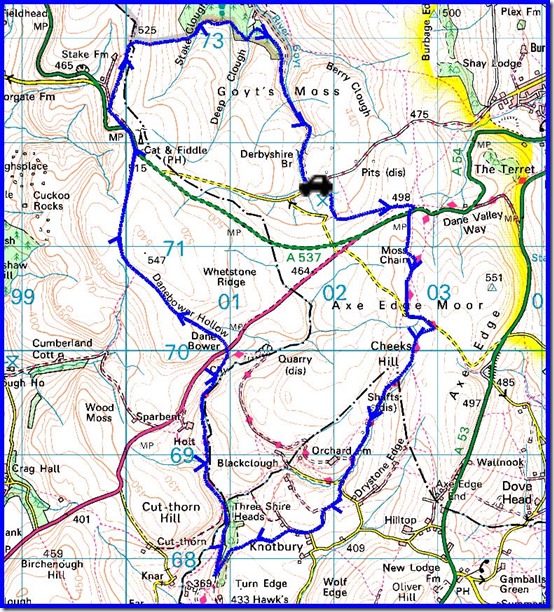 Posted by Phreerunner at 15:25 No comments: 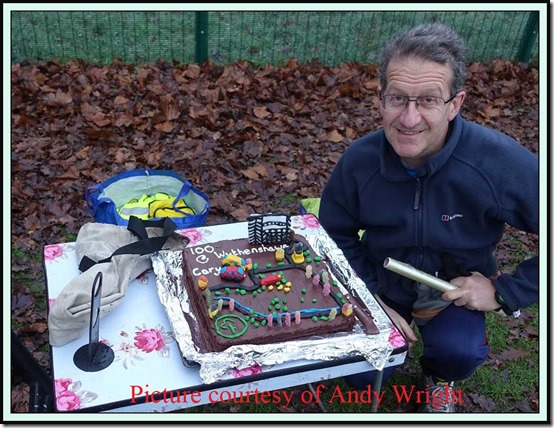 We know from our backpacking etc trips with Cary that he survives on a diet of Cake. Lots of it. So it was perhaps no surprise that he turned up for his 100th Wythenshawe parkrun with the masterpiece pictured above.

That picture and the one below were taken by Andy Wright well before Sue and I and over 330 others turned up in time for the 9.00 am start. Andy is one of a small core team that habitually arrives about an hour early on dark winter mornings in order to set up the course, distributing bollards, markers and signs in an effort for the event to run smoothly, which it always does, even if last minute route changes prove necessary. This has happened in the past due to waterlogged areas and on one occasion due to an inebriated member of the public who was stuck up a tree that was surrounded by fire engines and blocked paths when we arrived for the run.

Our thanks go out to all these stalwarts. (Spot the Wolves supporter – he left early and was rewarded with a fine result at Stoke.) 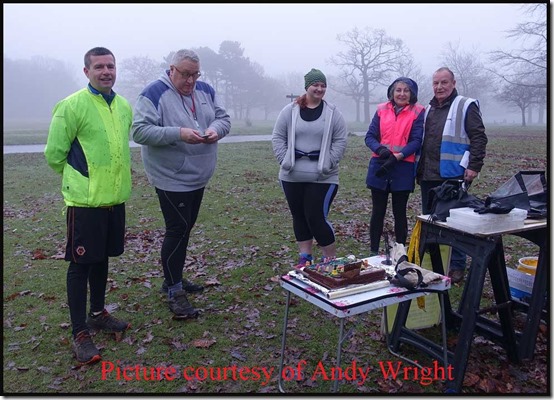 I snatched this close-up of the cake before the start. 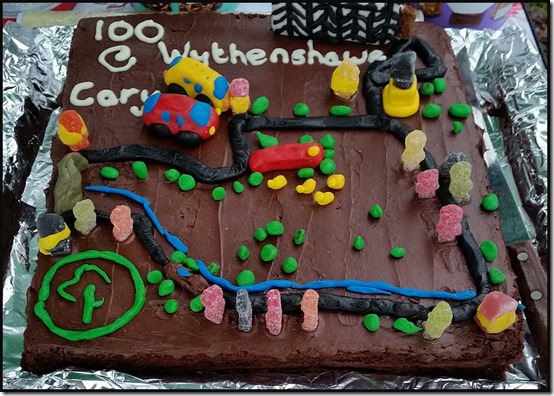 It was a misty morning. The course was muddy and slow, but the turnout was excellent. Here are some familiar faces at the start. 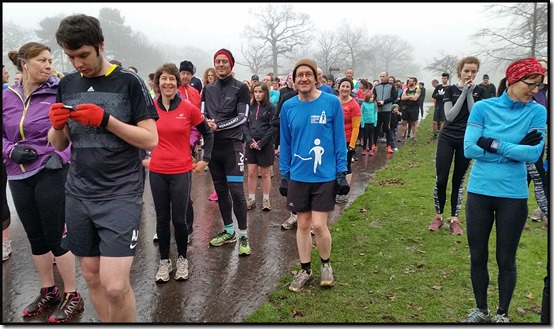 Sue and I still had calf and other injuries, so we jogged around at gentle paces, enjoying a chat with people as they went past. The results are here.

Today’s Run Director was Ralph (pictured on the right of Andy’s second image above). His team ensured that everything ‘ran’ smoothly, and he even wrote the Run Report in time for me to reproduce it here:

Posted on January 8, 2017 by wythenshaweoffice

What a way to start the New Year. 335 fantastic parkrunners, 25 fabulous volunteers and 1 stunning cake.

Sorry folks but headlines have to go to Cary O'Donnell's 100th Wythenshawe parkrun celebration cake. Anyone who hopes to win the 2017 cake of the year award is going to have to produce something amazing to knock Cary off the top spot. Yes I know it is only the first week but if you saw the cake and the detail that was put into the decoration of it I think you'd agree. For those of you who missed it here it is.

All the detail is there - the old hall, car park, far bridge, muddy passage, farm animals, trees, Cromwell, marshals in hi-vis vests, parkrunners and of course, the parkrun logo. The cake went down well with everyone who sampled it and even Cromwell enjoyed the occasion - he was last seen in the café but unfortunately didn't survive the experience. No-one has admitted to his disappearance!!

A huge thank you to Cary for this masterpiece in baking.

Now to the running.

As mentioned above we had 335 runners on a slightly foggy but otherwise ideal morning for parkrunning. Of these 69 were running at Wythenshawe for the first time with 45 yes 45 taking part in their first ever parkruns. We had tourists from places as far afield as South Manchester, Reading, Norwich and Birmingham. We hope you all enjoyed the experience and will return again and again and again and ……

There were 35 personal bests. Too many to name individually but I will mention 3. Edward Lord who achieved his first PB since 21st of May last year, Andrew Grant who on his 11th parkrun managed a time under 30 minutes for the first time and Carole Partington for achieving a quirky PB time of 33.33. Well done to everyone who achieved a PB and to those of you who didn't - keep on trying you'll get there one day.

There were 3 parkrun milestones - Scott Wilson doing his 50th parkrun and Kieron Walsh and Colm Mulhern both doing their 100th parkruns. Congratulations to you all.

Bravest parkrunner of the week is Cale McCoy who completed his first ever parkrun on Saturday. After tripping and badly grazing his face last week during his first attempt he bravely turned up again on Saturday for another go. This time he managed to stay injury free and complete the course. Well done Cale.

With apologies to anyone I haven't mentioned or any major omissions I think that's everything.

See you all again this coming Saturday and DFYB.

Thanks Ralph. I’m amazed, given the slow conditions (two steps forward, one back in places) that there were so many personal bests, and I was most impressed by Richard’s effort in third place, only 3 seconds outside his PB – it’s only a matter of time before he joins the elite 80% age related club. Go for it, Richard!

Here’s that cake again, with a few annotations. It lasted until about 10.30, by which time some of us were on our second coffees in the Courtyard Café. 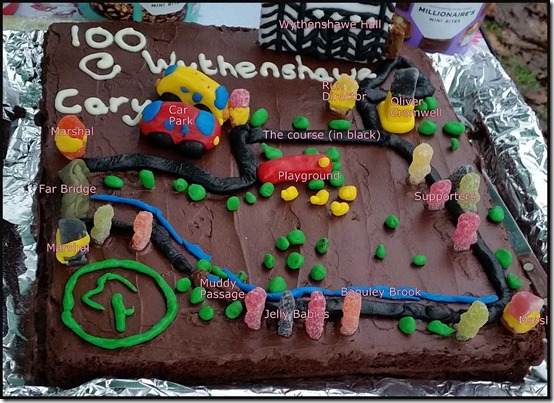 Calf report: thanks to our slow pace, Sue and I didn’t noticeably aggravate our injuries, but we subsequently went to see Sarah Pank at in-step footcare (thanks go to Claire H for the recommendation) who gave treatment and advice that was much appreciated, even if we are required to use ice regularly on our injured appendages, and are banned from running until the weekend. We had the pleasure of a visit from Jacob due to his term not having started and his mum and dad having gone to work.

Liz lent us some games and jig saws – Hot Wheels (above) and Hullabaloo being the star items that supplemented our own diet of jigsaws, Uno, dominoes and ‘'”Sorry”, to name but a few.

There were daily bike rides to Walton Park, and a long game of Frisbee on a muddy football pitch.

Motorists who potter their way around the M60 may be familiar with the Chill Factor building. Can you spot the ‘Chill Factor’ sign? 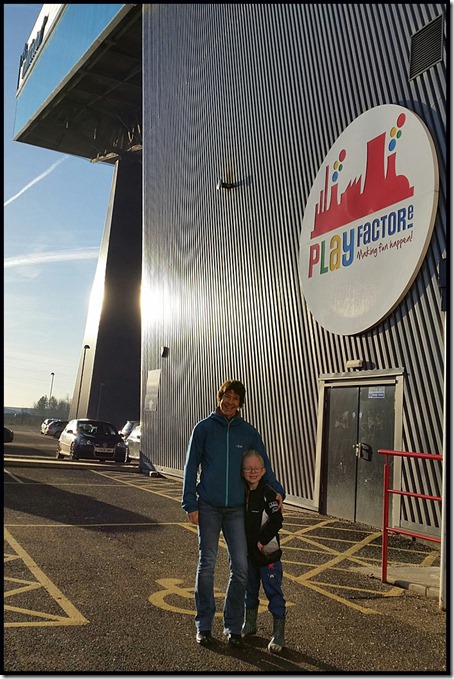 Below all the winter based activities is a large ‘soft play’ area called PlayFactore. Excellent for five year olds like Jacob.

It’s not cheap (except for pensioners), and there’s a time limit of two and a half hours. However, for a total of £18 plus a few extra coins for the arcade game pictured below, it was excellent value. 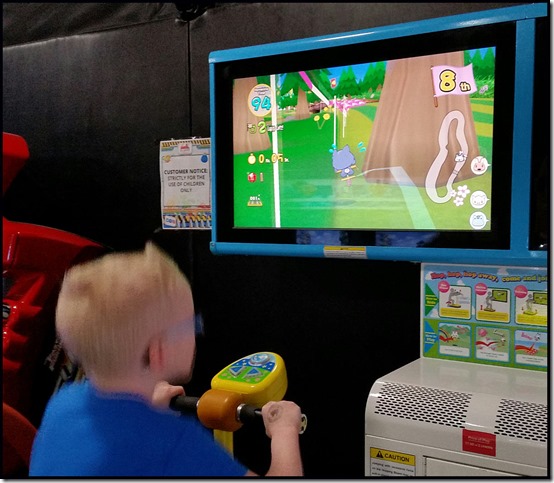 Whilst Sue and I spent most of the time following Jacob around an array tubes, ladders and slides, we did enjoy elevenses. (What’s new!) 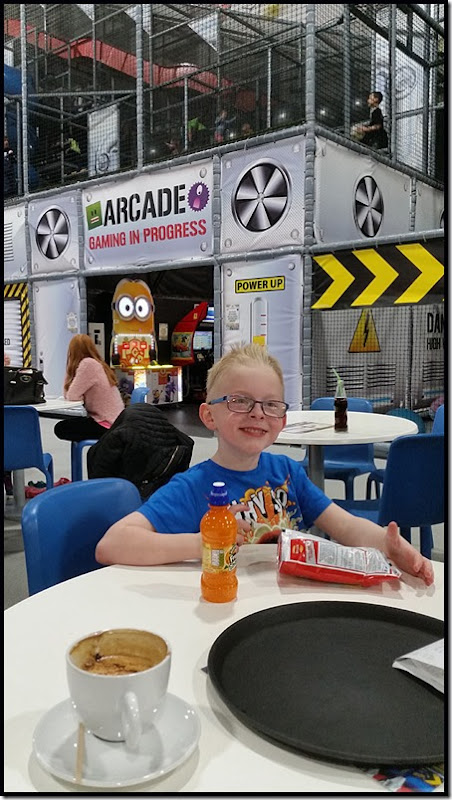 There’s a big slide that runs from the top to the bottom level. Jacob’s fast clothing resulted in an involuntary lane change and a bumpy landing. He wouldn’t go down it again, so no photo – he recovered on this bouncy ball… 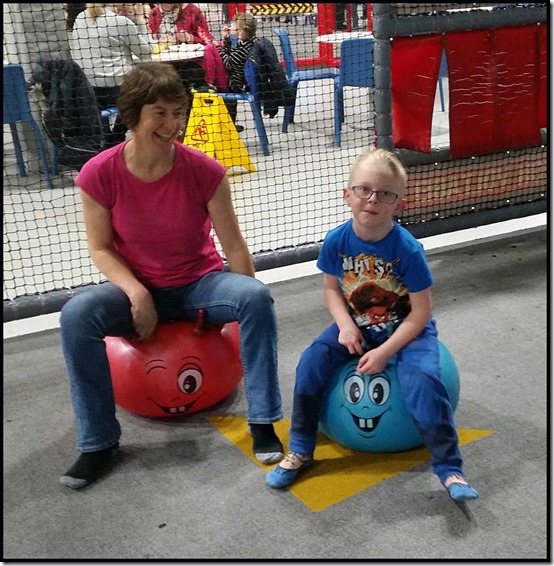 They were frosty days, but that didn’t stop the bike rides. Here’s Jacob with his main Christmas present. 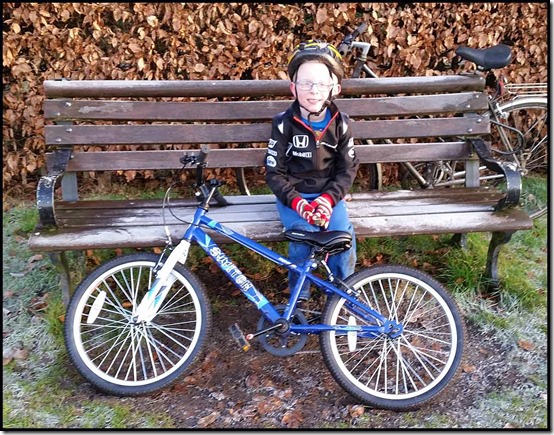 The Bridgewater Canal was partly frozen, to the extent that the Black-headed gulls were declining to land on the ice, instead attempting, with limited success, to grab Jacob’s crusts whilst flying past. They were showing rather less skill in attempting this, than the magpies that are emptying our bird feeder. 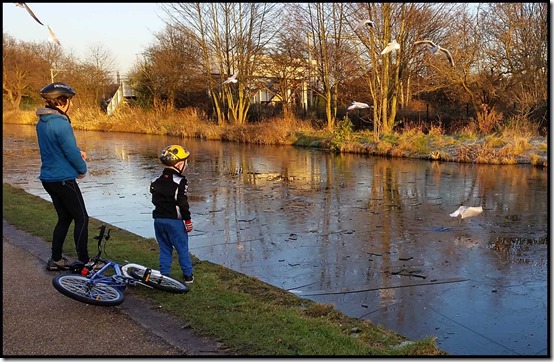 We had a lovely three days and enjoyed Jacob’s company a lot, if not his predilection to waking up full of beans at 5 am. (iPad to the rescue!)

Posted by Phreerunner at 17:18 No comments: