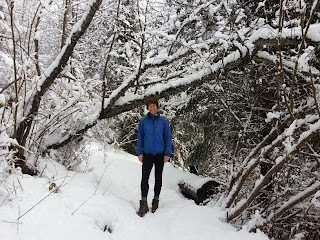 Overnight snow deteriorated to rain whilst we enjoyed our croissants at the start of a leisurely morning.
Our bag (there is only one for this short trip) was packed and the apartment cleaned and progress made with our current reading matter and Sue's Facebook adventures, as well as a walk up to a local viewpoont, during which the above picture was taken, before Yolaine appeared at 12 o'clock.
Lunch at La Trace was excellent (thank you Chantal) and was followed by a trip to Col des Aravis, passing on the way a large information board advertising a local Via Ferrata route and featuring a picture of a youthful Yolaine; she has been looking down on passing motorists at this point for the past fifteen years. The pass is a high spot, with good views towards Mont Blanc.
Snowshoes were duly donned and the five of us made our way to La Tête, from where we enjoyed a fine view of the Aiguille du Midi and other high points, but sadly the summit of Mont Blanc remained cloud bound.
Hot chocolate at La Trace and a lift from Yolaine back down to La Clusaz saw us waving goodbye to the last of our Bueso/Collomb-Patton hosts before being picked up a few minutes later by cousin Alistair for a lovely, if somewhat indulgent, evening near Geneva with him and Laurence and the ever playful Lyra.
Sent from Timperley after an easy journey home - more photos will follow
Posted by Phreerunner at 21:28 2 comments: 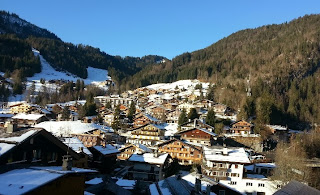 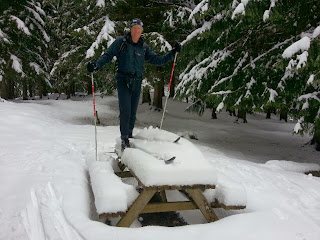 Gollet and Bellavarde are the highlights of the Nordic ski pistes on the Plateau des Confins, to which the number 2 skibus delivers us efficiently from a bus stop very close to our front door.
Despite heavy cloud and wandering sleet showers, we enjoyed our final romp in the snow that the French have allegedly stolen from Austria, covering around 20 kilometres on the above pistes. The trail took us from about 1410 metres to 1650 metres, where we lunched behind a barn in the company of a group of jolly snowshoers.
The descent was lovely, though we'll be pleased to replace the waxless skis with some that have a better glide for our next adventure.
The 14.43 bus was again utilised to return us to the comforts of La Clusaz,  where five and a half days of ski hire amounted to only €65 for the two of us.
We have secured a huge round of Reblochon de Savoie Fermier cheese, so it's a proper Tartiflette for Mike when he calls for his dinner on Sunday.
What does tomorrow, our last day on this little trip, hold in store? We have no idea, Chantal and Yolaine have been left in charge of that, and it'll depend on what greets them when they draw their curtains in the morning....
Today's pictures show the view that we have when we draw our curtains on a sunny day in Pierre and Yolaine's studio apartment, and the sad state today of a picnic bench that was so accommodating on Monday.
Sent from La Clusaz after the pleasure of a visit from Chantal and Joël for afternoon tea
Posted by Phreerunner at 19:15 No comments: 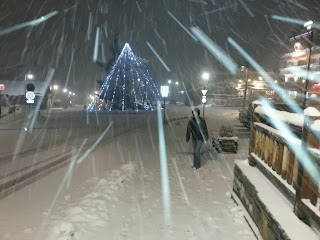 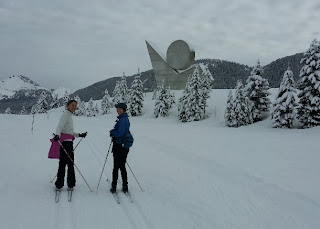 Overnight snow (pictured as we left the restaurant last night) and colder temperatures left the commuters to this Alpine village with icy roads to negotiate this morning.
Meanwhile, Joël would have been in his office by 5.30 am to orchestrate the safety of today's skiers by detonating avalanches on some of the pistes in order to make them safe for people on this initially sunny day.
We, of course, enjoyed our now customary lie in whilst waiting for Yolaine to fight her way up the road from Annecy. Having introduced only two newcomers to the world the previous night, she couldn't offer the 'tiredness' excuse. Anyway, she arrived bang on time and whisked us away to the Plateau des Glières for another 17 kilometres of Nordic skiing.
The weather was fine, albeit the sky slowly clouded over, hence the rather dull image of Yolaine and Sue in front of the memorial to French resistance forces who grouped together on this plateau in early 1944 and contributed greatly to the liberation of this part of France before the Allies arrived.
The Dran and Frêtes pistes gave us a nice varied route before our excellent lunch at Chez Constance, where some ten years ago Pierre and Yolaine enjoyed a gathering to celebrate their marriage. So the place holds good memories for Yolaine.
We were last to leave, at around 3 pm (did I say we enjoyed a superb lunch), and after repeatedly tangling with a large group of children who were faster than us but kept stopping, we left the Les Rennes piste in favour of the day's highlight, Les Mouilles piste.
The conditions were excellent even though the snow was a bit sticky for our waxless skis, and there was a fine sweeping descent to end the day's exertions at around 4.30pm.
A day of icy roads, superb skiing on both open ground and amongst beautiful snow laden trees, Yolaine's excellent company and chauffeuring, afternoon tea in the studio, and an early night after a light supper.
Wonderful!
Posted by Phreerunner at 20:48 4 comments: 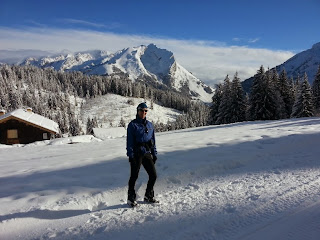 Wet, light snow continued to fall until after 10am, allowing us the luxury of another lie in before catching the eleven o'clock bus up to La Croix Fry.
By the time we disembarked the cloud had lifted sufficient for occasional beams of sunlight to sear into the fresh white deposits. The trees responded by dunking their overnight burdens on any passing shadow.
For a while we enjoyed fine views of the crète leading towards La Grande Balmaz (2616 metres). The ridge is pictured behind Sue. It has no footpaths.
The Mont Blanc massif poked its head out of the clouds for a short while, but soon mist descended again to around 2500 metres, with swathes of cloud lower down at various levels.
We left our skis at home today, in deference to some slightly irritated and rarely used muscles. Nor were the snowshoes borrowed from Chantal and Joël deployed. It's debatable as to whether these would have made our walking tour of the Beauregard Plateau any easier, but we managed fine without them so long as we kept to the piste reserved for walkers,  where the 30 cm or so of snow that had fallen overnight had been nicely tamped down.
There was hardly anyone about, just some sweet singing birds to keep us company - a huge contrast to the hordes of folk we saw up here on Sunday.  But with no picnic bench to be found, and with picnickers not welcome at the mountain huts, we were obliged to lunch on the piste. Very nice it was too, until the last bite of chocolate removed one of my front teeth!  Just a razor sharp stump remains, but at least my sympathetic dentist can see me at 9am on Monday.
From the plateau, we took the easy path down to La Clusaz, on which snowshoes would have been a hindrance. Two children on skis flew past, giving us quite a fright - we saw very few others on today's trails.
Back at base by 3.30pm, after our 13 km stroll, resulted in plenty of 'down' time, during which I was pleased to be able to move on from the Hunger Games trilogy.
Tonight we are treating our hosts to a meal at La Cordée. I hope no more of my teeth go awol!
Sent from France
Posted by Phreerunner at 18:01 2 comments: 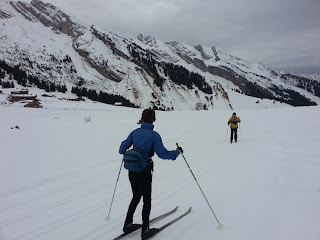 Today's excursion with our skis involved a short bus ride past a gigantic English rose to the chapel at Confins.
We'd enjoyed a lovely evening at La Trace, where Sue correctly guessed Pierre's Vanoise loppet time as being three hours for the 42 kilometres. He made it to dinner in plenty of time though, whereas Yolaine was delayed by five babies, a long sleep (having babies is tiring for all involved) and a car crash blocking the narrow road to La Clusaz.
At around 1400 metres, Plateau des Confins is over 200 metres lower than the Beauregard Plateau we enjoyed yesterday. Today was warm and overcast, with the cloud slowly thickening to produce light snow that rapidly turned to slush down in La Clusaz.
We skied all the green and blue runs, totting up another 17 kilometres before adjourning for hot chocolate and the bus home. There were not so many people skiing today, and some of those we encountered on the easy trails made us feel positively expert. This plateau is obviously a favourite place for beginners to Nordic skiing.
An afternoon in the apartment has seen me scything through Suzanne Collins' Hunger Games whilst Sue is meandering along with The Immortal Life of Henrietta Lacks.
For dessert: Rummikub.
Sent from La Clusaz
Posted by Phreerunner at 19:05 No comments: 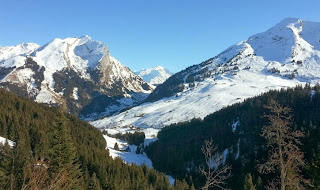 A blue sky day saw us on a gondola heading up to the plateau by 11am, after a long lie in and a productive visit to the chocolate croissant shop.
Our waxless hired skis worked fine over the zigzaggy course of 17km we enjoyed today. The Mont Blanc massif was visible for much of the day,  seen in the centre of the above picture taken from near La Croix Fry, where we enjoyed an al fresco lunch on a picnic table in a temperature of about 15C and no wind. Quite a contrast to our lunch stops in Gatineau Park!
Once we got our 'ski legs' the blue trails we covered proved quite easy, the only wipe out being due to Sue installing her skis before actually reaching the Nordic Skiing trails that had clearly been groomed overnight.
Hot chocolate in La Caleche, on the ground floor of our apartment block that used to be a hotel, gave us a wi-fi opportunity. Sue is now the proud owner of an ipad and joined Facebook a few days ago, so she was drooling over her Facebook activity whilst slurping her drink.
Our hosts, Chantal, Joël, Pierre and Yolaine entertained us tonight at La Trace, where we enjoyed a fine raclette meal. Thanks everyone - it was great.
As perfect a day as they come.
Goodnight.
Sent from La Trace
Posted by Phreerunner at 19:37 4 comments: