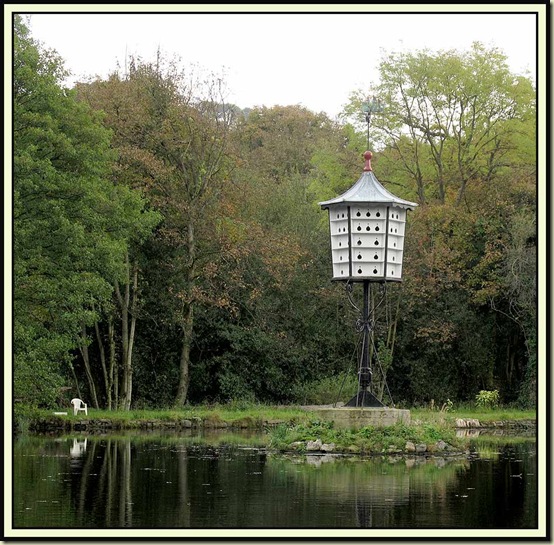 The past two Tuesday evenings have seen us out and about in the ‘dark’.  It wasn’t actually Dark as we were within the confines of Greater Manchester’s light pollution zone on both occasions, so only those with dodgy eyesight needed torches.

Last week Graham B and Andrew joined Sue and me for an easy stroll from the Midland Hotel at Marple Bridge, from where we headed down the track to Roman Lakes and on to Strines before passing the dovecote (Pigeon Tower) pictured above.  Then across the Marple to New Mills road and up to the Peak Forest Canal to join the towpath in the midst of some canal repair work – the generator sounded just like a barge chugging past – and a straightforward stroll back to Marple on this pleasant evening.

This week one of our rare forays to north Manchester saw Sue and me joined by Alan R, Don, and (eventually) JJ and Viv, for a most pleasurable 7 km circuit from the Great House Barn just off Rivington Lane.  We headed up one of the many tree lined avenues in Lever Park, named after William Lever, Lord Leverhulme, who bought the estate in 1899, that lead towards Rivington Hall.

A turn to the left took us past Rivington Hall Barn and up beside the edge of the woods to a remote car park with the sort of ‘motorists’ one tends to find at night in such places.  A steep, rocky track, deeply eroded into the hillside, levels out shortly before the spooky looking Pigeon Tower. 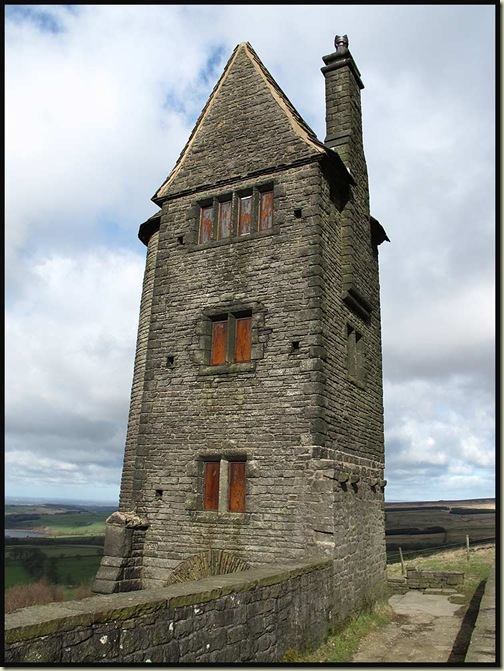 The Tower tops a series of terraces beyond which there's a fine view over east Lancashire.

After a short level stretch a path leads directly up to the high point of this walk, Rivington Pike Tower, 363 metres, a hunting lodge built in 1733.

There are excellent views back to the Pigeon Tower and beyond. 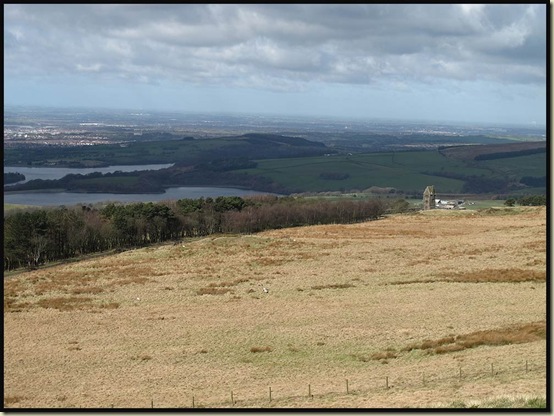 The path up to Winter Hill from Rivington Pike Tower is very boggy just now. 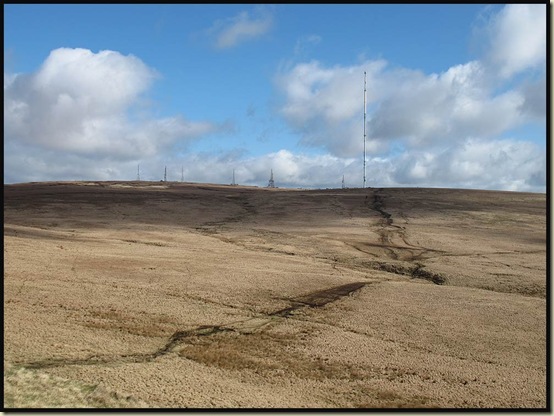 We encountered the ghostly countenance of a group of lost Ramblers, communing here in search of direction. 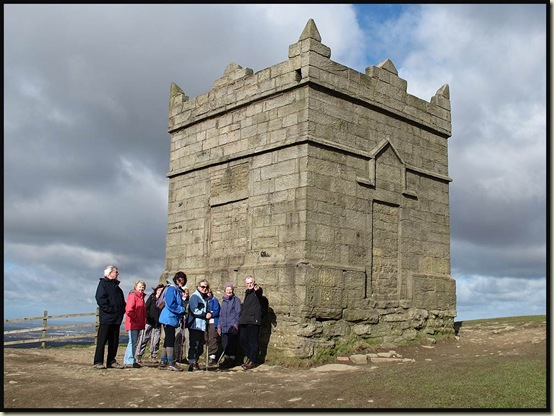 Would you believe that the Tower has a cellar?

After pausing for a while to admire the views, we were encouraged by a brisk vapour laden breeze to scurry down the slithery hillside towards Horwich.

Lapwings monitor one’s progress hereabouts at this time of year. 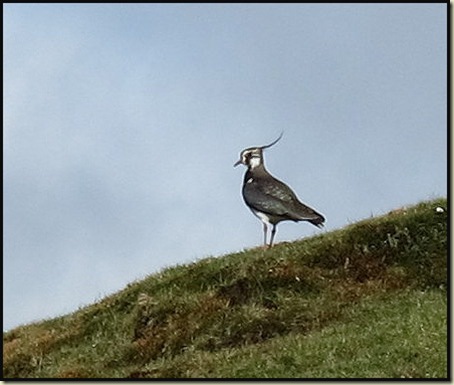 Lower down, the path is mushy, but a tarmac lane leads shortly to the outskirts of Horwich, and this long, straight avenue in the direction of Rivington Hall. 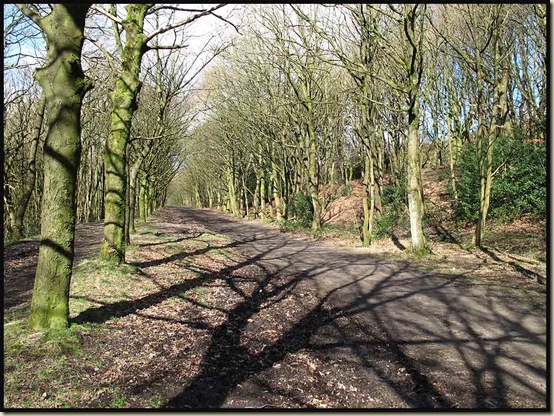 Our route on this bright evening turned off after a few metres, taking a left turn down the edge of the wood to cross the Rivington to Horwich road.  We moved briskly on to 'The Castle', an incomplete scaled down replica of Liverpool Castle, intended as a ruin. 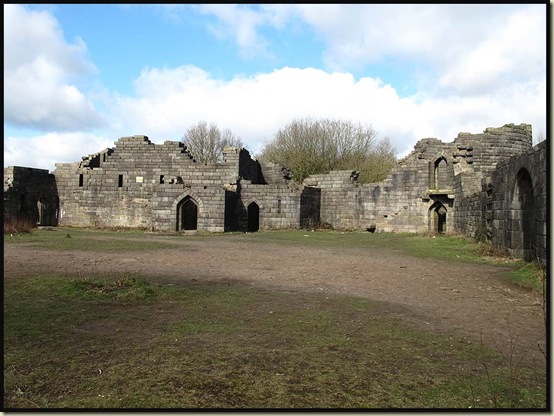 The castle is pre-dated by Rivington’s Reservoirs, which were built in the 1850s and are currently the scene of dire warnings about the hazards of bathing in reservoirs, especially when under the influence of alcohol.

There were no such goings on during this visit, and from the edge of the reservoirs are fine views back up to Rivington Pike Tower and Winter Hill. 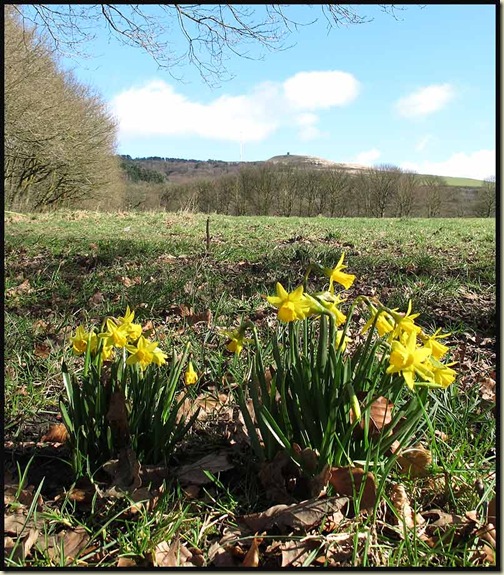 After well under two hours, we found our way back to the Great House Barn, via a Go-Ape course on which we wisely remained at ground level despite JJ’s natural tendency to impersonate Tarzan. 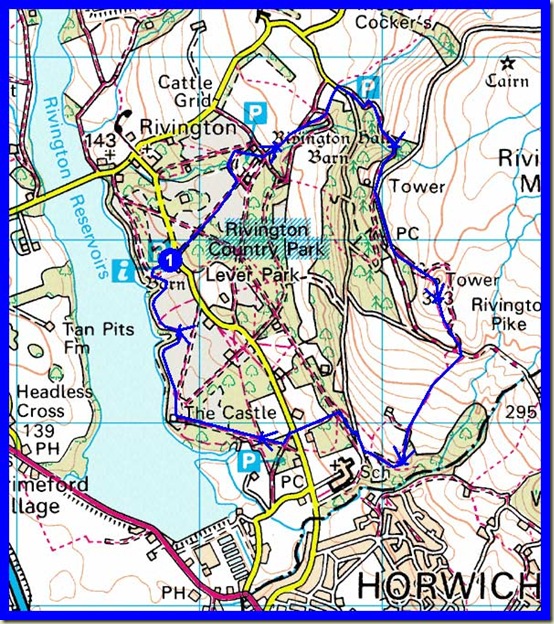 Alan R’s more timely, and arguably more accurate take on this walk is here, and the rest of my pictures, taken using my hugely expensive new flashgun from Sun Systems Inc, are here.

Click the links for interesting information on Rivington and Rivington Pike.

The rest of this year’s evening walks programme is here, and we’ll be pleased to see anyone who cares to turn up.  There may also be additions to that programme.

Finally, I should add that we failed to stop at the Ridgway Arms, instead of which we joined Lyn, Ruth and Stuart at the Spinners in Adlington, where despite our valued assistance they still managed to win only a wooden spoon at the weekly quiz night.  Ah well “ you can’t win ‘em all!”