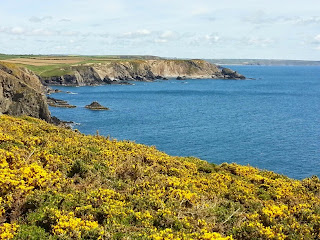 Having completed the South West Coast Path last year, Sue Emmett's ageing followers have this year tracked her to Pembroke, for a go at Wales.
Today's walk was a complete contrast with last week's forlorn efforts around Fraserburgh. Perfect weather and footpaths have made for a wonderful day out in what must be 'World Class' scenery. Whatever words I now compose can't do justice to the quality of the landscape and its flora and fauna.
After an interesting ride on an old school bus, especially commissioned by Sue E from the local transport museum to blend in with its passengers, thirteen of us set off from Newgale. Jacqui, Hilde and Anita immediately caused confusion by embarking in the wrong direction. Many years of "Keep the sea on your right" had perhaps ingrained to the extent that they were unable to adapt to the Welsh convention whereby the sea is on the left.
Eventually they realised their error and by the time elevenses was taken they had joined the rest of us - Sue, David, Sue, David, Betty, Liz, Rachel, Andrew, Gaynor and me. This was the last time we convened as a group today!
Sue and I soon fell behind. Flower photos were to blame. Sue continues to experiment with her new Canon G15 camera, and it takes time.
The Gorse, as can be seen in today's image, is in fine fettle just now, with it's vivid yellow flowers. There are also large swathes of Thrift, Spring Squill, Sea Campion, Scabious and more. We watched Linnets and Stonechats forage in the gorse, and a Peregrine soared overhead for a while.
Tea and cake outside a café overlooking the inlet at Solva was followed for Sue and me by lunch on a bench just above the village. People were jumping in off the quay. A family passed, carrying a kayak up the hill. "Extreme Kayaking" muttered dad.
We then caught up with some of the others and ambled along with them on the gorse bedded cliffs above the shimmering sea for the rest of the day.
Before heading into St David's, some of us went down to the well and the chapel at St Non's. The well is said to have sprung up during a thunderstorm when St David was born around 500 AD. Its waters are alleged to cure infirmities. Anita tried to go for a swim, but it wasn't deep enough. The chapel is very small, with an exquisite stained glass window.
Last night Sue, Andrew and I enjoyed nosh at the Farmers Arms before adjourning to meet the others at their de luxe residence a couple of miles away near the Youth Hostel. Tonight it's Bishops - just down the road from our B&B, Y Gorlan.
Just 19 km in 6.5 hours today. All very leisurely. Fabulous coastal scenery.
Posted by Phreerunner at 18:33 4 comments:

Another Day, Another Trip 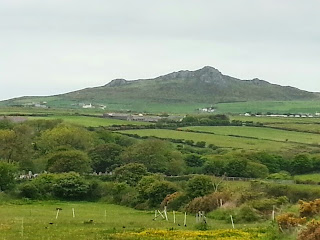 And where might we be tonight?
Here's the view from our B&B.
(It can't be Scotland, of course, as it's not raining! )
Sent from 'abroad'
Posted by Phreerunner at 18:34 8 comments:

It was a lovely evening for this six mile exploration of Hail Storm Hill, just to the south of Waterfoot.

Sue and I set off from the otherwise deserted picnic spot at Waterfoot at 7.30 and after a false start through someone’s garden we headed relentlessly upwards, overtaking a couple of mountain bikers, past the gardens of Rake Head and onto Brandwood Moor. 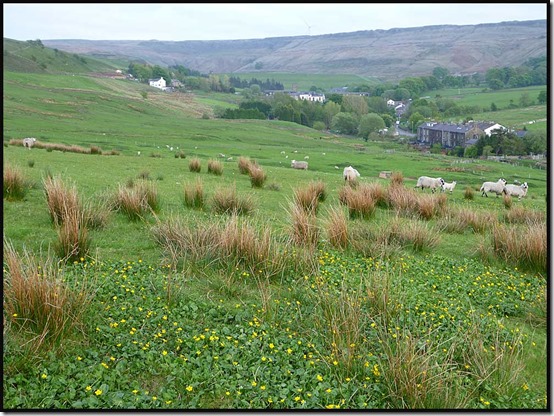 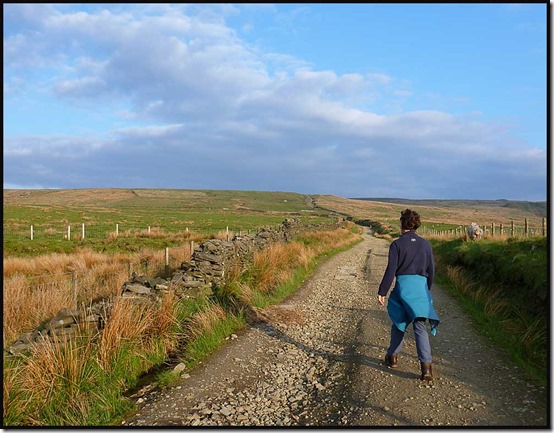 There is a single wind turbine on display as you rise to the south, but beyond the track junction, if you head towards that turbine, many more come into view.

Our mission to seek the summit of Hail Storm Hill took us first past Top of Leach’s trig point at 474 metres, which I’d visited before with Alan R and had a little difficulty persuading him that it wasn’t the highest point.

There’s a stone pillar here inscribed with the names of some of the local towns – Bacup, Whitworth, Rawtenstall, Haslingden and Rossendale, I think. 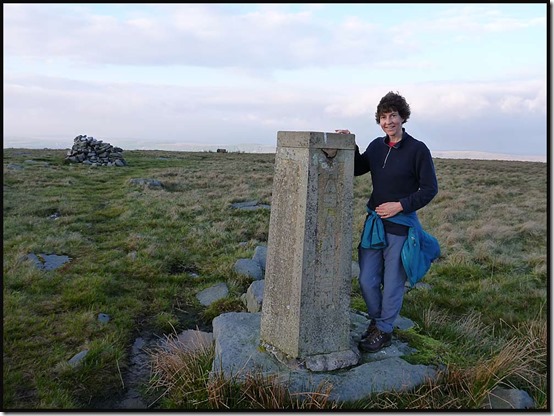 The other direction, from a higher point, reveals the wind farm. 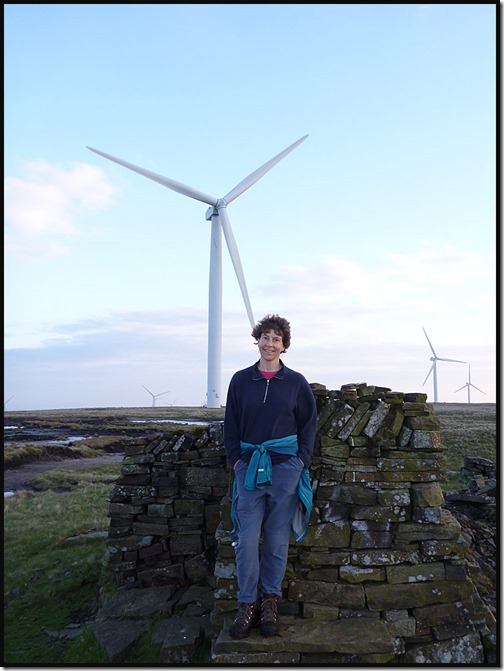 We walked to this other point that looked higher than Top of Leach, then through the shadow of the whirling blades and along the access track for a while, trying to minimise the amount of bog needing to be crossed to reach our target.  Just 800 metres of it from this direction.  Luckily it was fairly dry and no foot wetness was sustained.

Eventually we reached the summit – at 477 metres, the highest point in this area.  Marked by a massive cairn of about four stones. 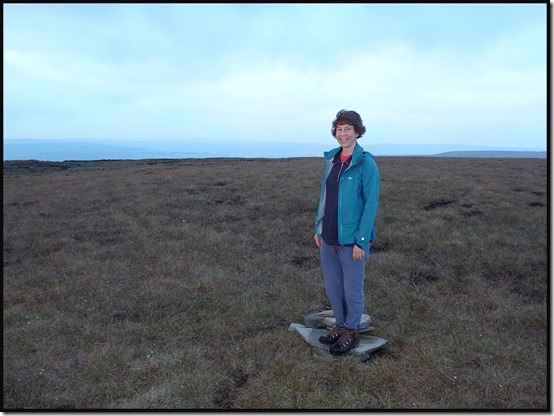 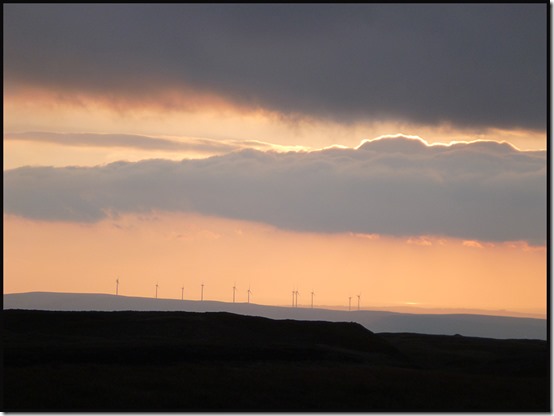 Heading north with good sunset views we passed through the mountain biking mecca of Cragg Quarry and soon regained the Pennine Bridleway, with good dusky views across Cowpe Reservoir to Bacup. 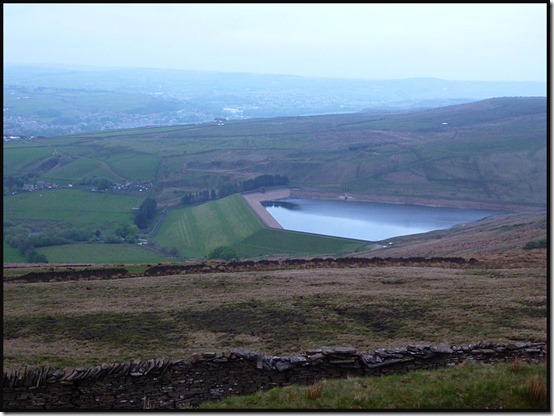 The Bridleway, which is also the Mary Towneley Loop at this point, took us nicely back to Waterfoot after just over two hours and a little more than 9 km with 276 metres ascent.  Our actual route and other data is shown below. (Click on ‘View details’ to do exactly that!) 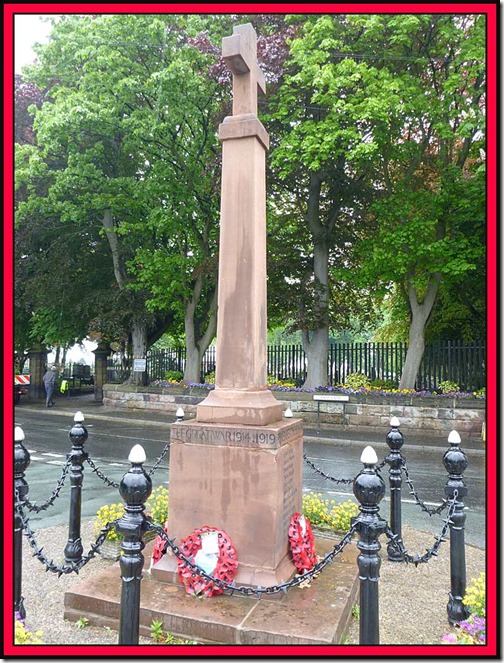 I took a bit of time out on Tuesday for a walk in the rain around Rixton.  I’d not been there before, although it’s just a few minutes away from Timperley, less than a mile beyond the Warburton Toll Bridge across the Manchester Ship Canal.

There’s plenty of space to park near The Cross at Hollins Green, and from The Cross you can head down a narrow path to the right of the cemetery.  This brings you out into the open fields pictured below. 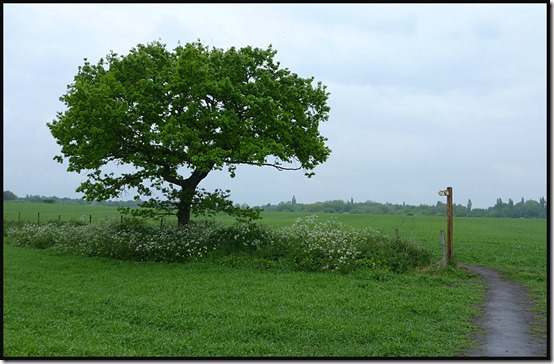 The footpaths around here are delightful, threading their way over streams and ditches and through fields that are lush with growing crops. 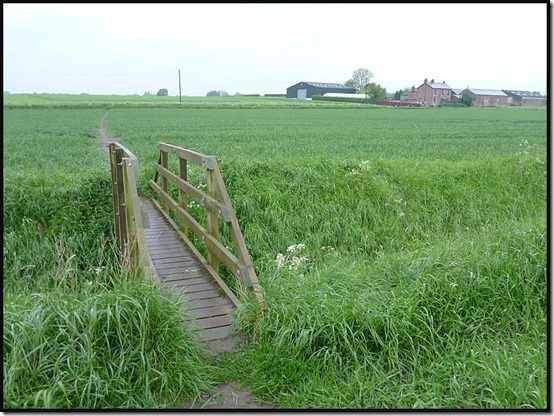 What a pleasant contrast to the pathless Aberdeenshire farmland that I could only observe from long tranches of tarmac last week.  Here in Cheshire, the lapwings seem as plentiful as they were further north, but I saw no oyster catchers today.

After crossing Dam Lane and enjoying more fields, I reached Moss Side Lane and turned right past the Brick Works.  The factory appeared to be thriving. 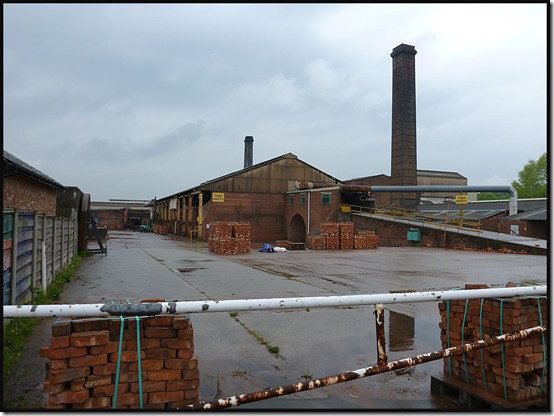 Beyond the factory, several entrances on the left draw one into the lush site (an SSSI) of Rixton Claypits. 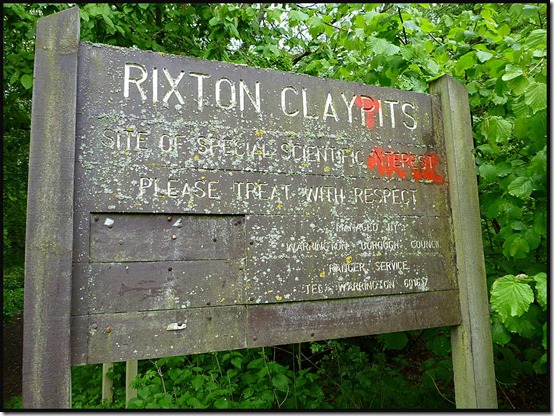 Old pits, left after clay has been extracted for brick making, remain as a patchwork of woods, damp meadows and open water.  Orchids and yellow wort grow plentifully in the alkaline clay habitat. 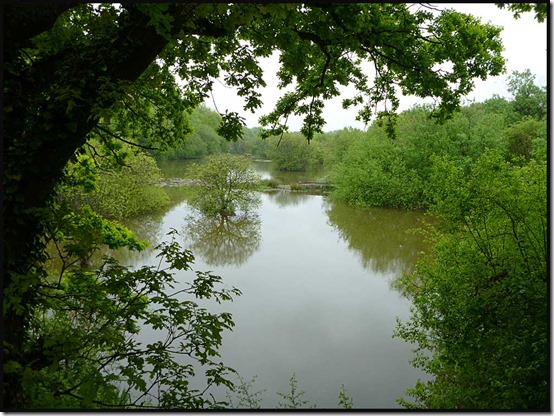 The abandoned clay workings that were last dug in the 1960s by Irlam Brickworks have enabled Rixton Claypits to become a Nature Reserve comprising lakes with islands, reedbeds and willow scrub, all rich in wildlife.  It’s a refuge for wildlife in an area dominated by light industry and agriculture. 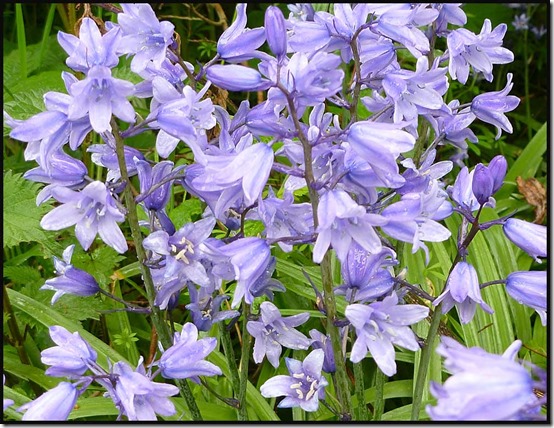 Huge numbers of plant and bird species can be found in the reserve, and at this time of year, as well as bluebells, the paths are lined by forget-me-nots and red campion. 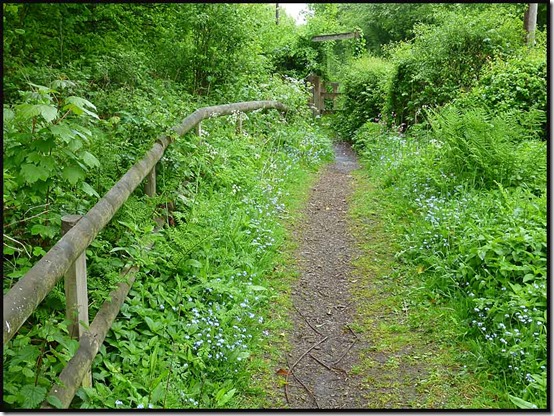 An information board, the support for which has been lovingly carved, explains that at least 18 species of damselfly (delicate – hold wings along their bodies when at rest) and dragonfly (larger – wings outstretched when resting) can be found hereabouts.  They are carnivorous, taking insects whilst on the wing. 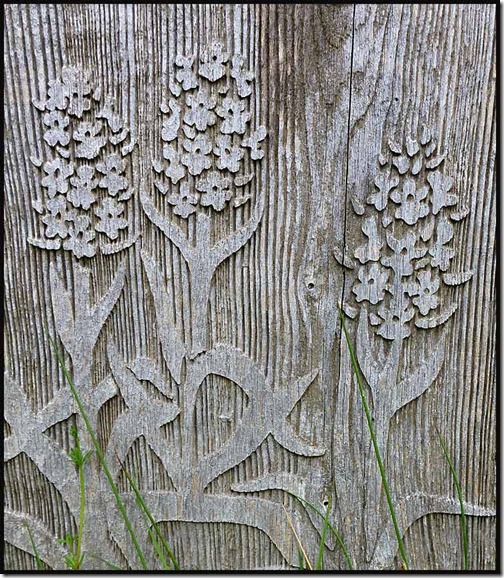 There are loads of paths within the Reserve, and after a wander around them you can exit onto Manchester Road near a car park.  The paths follow the edge of the reserve, so the busy road is the other side of a hedge.

Returning to The Cross via Chapel Lane and School Lane, these buildings are passed.  They look a bit like mid European barns, but I think they are probably a legacy of the old brickworks.

Here’s the route I took.  There are lots of footpaths hereabouts, so plenty of options.  It took me about an hour and a quarter for the 6 or so kilometres (4 miles). 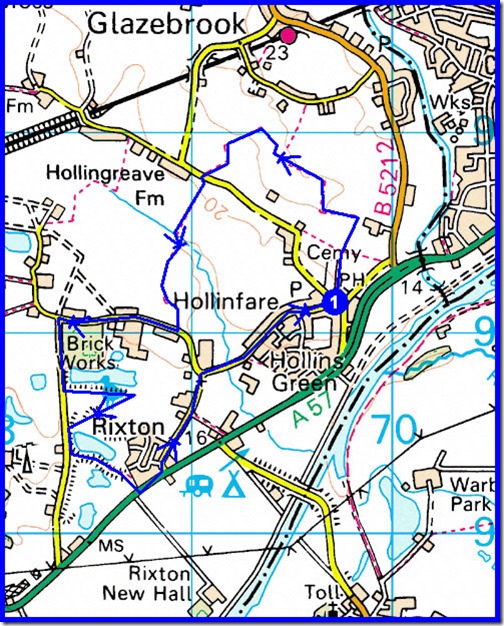 Posted by Phreerunner at 15:15 No comments: 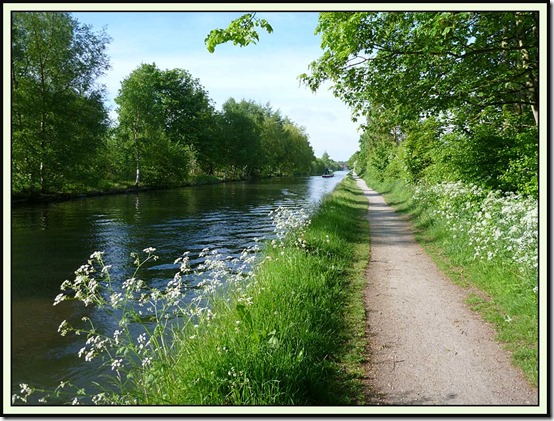 Sometimes it’s nice to be back home, beside a flower strewn canal towpath.

This picture was taken yesterday morning before the rain.  Which means that since then I’ve been quite happy to sit at home and plan the next trip, sort through a few photos and read a book.

Home can be a comparatively restful place.  It’s gone very green since I was last here. 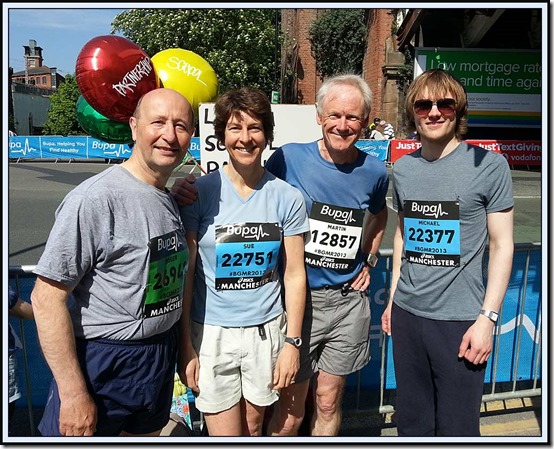 Many readers will be aware that we were running today for the Levana School Partnership.  This posting is to thank those who have sponsored us, encourage those who haven’t to do so, and to report the results of our elite sub-team – pictured above.

We couldn’t really go wrong, as it was a perfect day for running, if a little warm.  I think we all wanted to come home inside an hour, and thankfully all four of us managed to achieve that aim.

For the record, our times were as follows:

There were just under 27,500 participants, of whom 12 managed to finish inside 30 minutes.  Presumably they had a clear run, whilst other runners presented our little team with some fairly solid obstacles.  I recall a rather large and ponderous Rubik’s Cube blocking my way for some time, for example.

Nell, pictured below second from left on the back row, has expressed her sincere thanks for all the donations.  She will be visiting the school in the next few weeks to check that all is well and that every penny is being spent wisely. 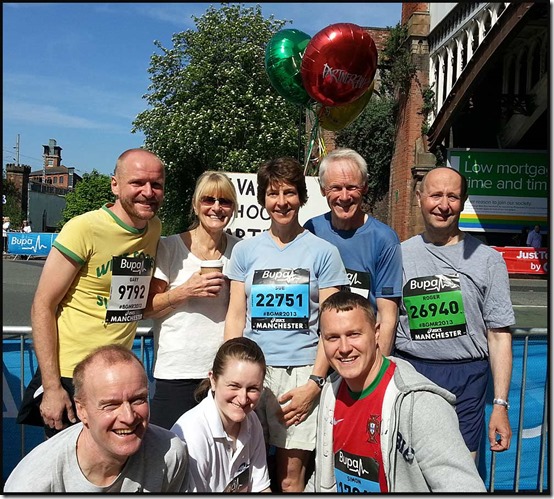