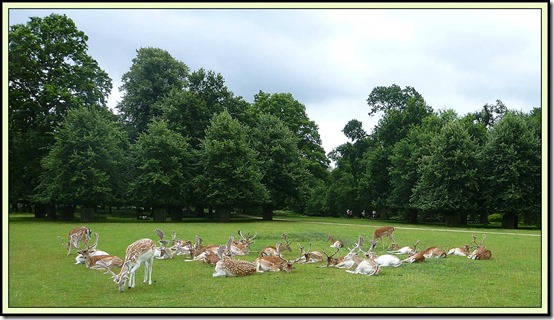 We enjoyed a lovely Monday morning with Kate, Jacob and Jessica in Dunham Massey Park.

Not many photos were taken, but this posting marks a return to ‘normal service’ for friends and family. 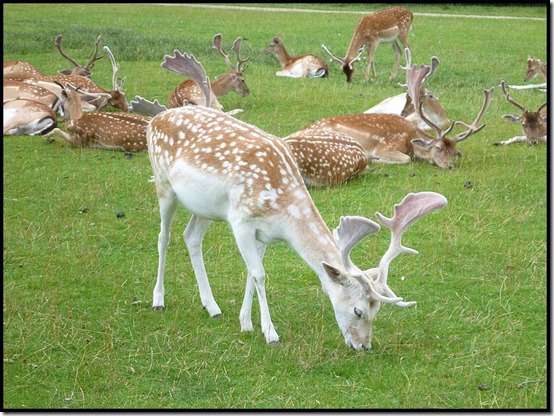 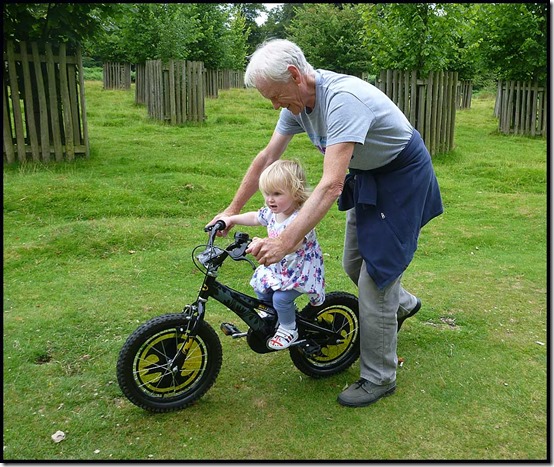 Posted by Phreerunner at 18:55 No comments:

Another Pyrenean Adventure – Coast to coast along the GR11 - The Book 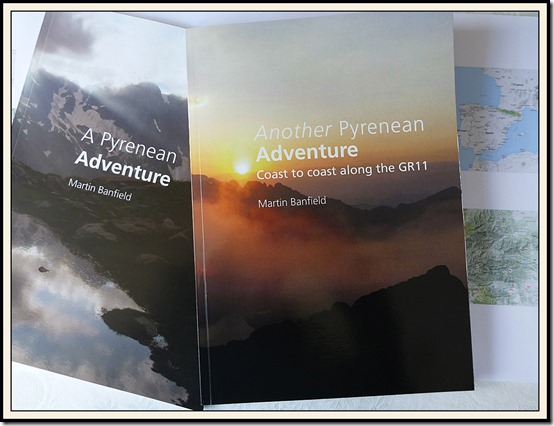 I said somewhere that there wouldn’t be a book of this trip.

I was due to travel home from this walk today, but I finished a few days early and came back last Saturday.

When GR10 was completed in 2013, Humphrey kindly converted my blog postings into an 80 page book. Very good it was too. I wrote all about it here.

This time Humphrey has again excelled himself, with another 80+ page offering in the same format of which there are currently just a couple of copies. He has also produced some very useful maps.

I now have several options:

1. Distribute by way of a PDF file. I’m not sure about this as I’ve now compiled an Index page to the postings and have inserted links for easy navigation from page to page – all that’s missing are the maps.
2. Print small batches ‘On Demand’.
3. Print by conventional litho, as with the previous book – by far the cheapest option but requiring a minimum print run of 100 copies.

I could also combine the two books into a single offering.

Since I was only supposed to be arriving home at about the time I’m writing this, it has come as a bit of a shock to receive the book. There again, yesterday (when it arrived) was one of my ‘official birthdays’ and I know Humphrey wanted to thank me for offering him a few minutes reminiscence over his morning porridge during the past few weeks!

I have to say I was more than gobsmacked by his generosity.

Anyway, to help me decide on how many (if any) more copies of the book should be printed, I’d be grateful if those of you who would like a copy would let me know by email to martin@topwalks.com so that by the end of September I can make a decision on what to do. 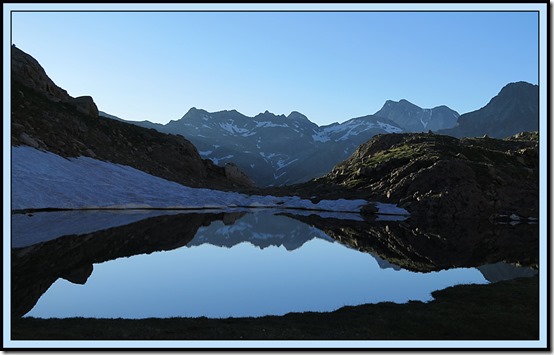 Fun in the Pyrenees

Another Pyrenean Adventure – Coast to coast along the GR11 - The Book 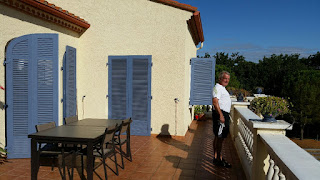 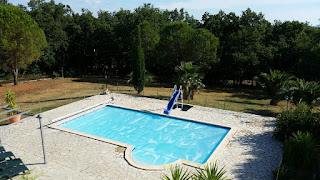 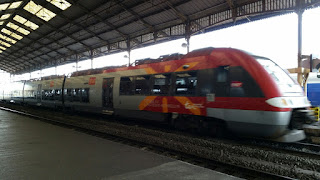 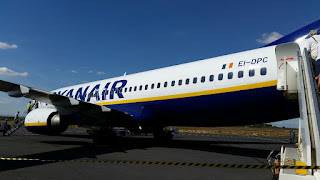 The trip started in Timperley so it should finish here. Then there will be an index page and more comments about various other stuff, I suppose.

My trains home were booked for next Friday, so I could have swanned around this lovely part of the world for another week. But I know that jobs are piling up at home, and seven weeks is quite a long time to be away anyway. A call to Voyages-sncf confirmed that whilst my train tickets could be changed, I would have to pay the difference between my low cost advance fares and the fare on the day, which for the Eurostar leg of the journey could be considerable. Also, it looks as if I can get a refund for the TGV fare to Paris, though not for Eurostar or the bus to Manchester from London, which was very cheap anyway.

David is quite expert at the different ways of getting back to the UK from Argeles and he quickly found a cheap Ryanair flight from Beziers to Manchester, so that was booked using this phone, on which the boarding card was discreetly stored.

So by 10 am on Saturday I was back on the Avignon train, which takes an hour and a half to reach Beziers.

It was a shame to spend so little time with David and Jan, though I'm in two minds about getting out of today's task, which would have involved helping David to lay a synthetic lawn at his son's house in Argeles where clients are arriving tomorrow. I hope David can also resolve a minor problem involving the colour of the water in the pool!

Thanks again to D and J for having me and helping me to return to the English speaking world. And for a delicious meal last night.

Everything was quite fresh on Saturday morning after the first proper rain for two months - the lightning from the storm was quite spectacular.

The Languedoc Express duly deposited me in Beziers at 11.30. The bus to the airport didn't leave until 14.40, giving me plenty of time to explore the town - a reasonably pleasant place with a nice park near the station. But I'd had enough of lugging The Brick (my 15 kg rucksack in case you'd forgotten) around, so spent much of the time outside a café. I did try to get some goodies to boost my luggage to the 20 kg I'd paid for, but the insistence of shopkeepers that I part with my valuables whilst doing the shopping lost them the business.

The Ryanair flight saw me uneventfully back in Timperley before 7 pm.

Worst Day: by a country mile - the exhausting Day 34 out of Encamp.

I'm only aware of one other GR11 compleater amongst my encounters with other folk. That's German Martin. I expect that the Spanish dad and his twelve year old son also finished, as well as Ian and Jules who sadly I only met very briefly in Puigcerdà. This contrasts with at least half a dozen people I actually saw at the finish of my GR10 walk two years ago.

I was sorry to discover that Mick and Gayle had abandoned their GR10 walk in Luchon and returned home. I'd wondered how much they were enjoying it, but I'll miss Gayle's entertaining blog entries which I was looking forward to continuing to read over breakfast over the coming weeks. Mind you, I have 500 entries to catch up with on the blogs I follow, so that'll make a dent in my other activities.

Would I walk across the Pyrenees again? I've now strolled the HRP and GR10 and walked GR11 at a rather faster pace. I've also cycled across from east to west. For me the HRP was the outstanding route, GR10 was fun and sociable, and GR11 was more solitary and because of the pace I chose to go, more challenging. I won't be doing any of the walking routes again. What has been very obvious to me on this trip is the relatively straight line nature of a walk that passes by lots of interesting places. The same applies to GR10. So there are many more places to explore, both on the French and Spanish sides, from excellent bases with good accommodation and food. It might even be nice to devise a tour using the Spanish Paradors.

The only coast to coast route I'd consider would probably be east to west, more in the foothills and passing through places of interest, on a mountain bike. No camping would be involved. I'd love to do that with Tobi, if he could put up with my gentle pace, and Markus would also be a fine companion. It might take about three weeks.

I'm pretty happy with the majority of my gear.

There's a slight question mark over my choice of footwear, as it may have contributed to my pressure sores. But the Keen Targhee ll shoes have worn well and would probably do the trip again. Except when my feet were sore they always felt extremely comfy.

Silk liners for sleeping bags wear out. I should have started with a new one.

My lightweight sleeping bag wasn't used very much, other than as an occasional blanket.

The Terra Nova Solar Competition 2 tent, despite having gone across the Pyrenees a couple of times and across Scotland at least once, has never been tested in strong winds. I'm more than happy with it though. Obviously it does withstand heavy rain. (I must have turned into a fair weather camper!) I later discovered lots of small holes in the groundsheet, perhaps from the pine needles on Day 44; a repair kit will be brought into service.

The Lowe-Alpine Nanon Hyperlite rucksack that I was given to test in 2011 has now been tested from cradle to grave. It has been an excellent and very comfortable rucksack, much better than its Go-lite Quest predecessor. But like the Go-lite it lacks long term durability. Stitching and zip failures, as well as serious deterioration of the shoulder straps and numerous holes and small tears in the Dyneema fabric, mean that this item will soon become landfill.

The Thermarest Neoair now leaks rather more than I'd like. It must have a pinhole puncture that needs mending. Now I'll be reverting to using the Karrimor Jaguar 65 litre rucksack, I'll have room for a Karrimat that is lighter and perhaps a better insulator than the Neoair, which Sue may continue to use if it can be mended.
I was disappointed that my two litre Ortlieb water carrier started to leak. Perhaps a thorn got it. If it's a problem with a seam I'm sure they will replace it.

Waterproofs kept the rain out as they should do, but the waterproof linings in the Keen shoes could only repel heavy rain for a few hours.

Tilley hat number four was for me an essential piece of kit.

Saucony Hattori running shoes were perfect for river crossings and for use in the evenings.

Technology: the Solarmonkey Adventurer charger was used but not really needed, and the Canon G16 camera and Samsung S5 phone both worked adequately.

That's about it regarding significant items of gear. If anyone has any questions I'll be happy to answer them by email (martin@topwalks.com) or by way of comments hereto.

Today's pictures:
David admires his estate
Arriving in Beziers (the nearest I could get to a tractor!)
Leaving the Pyrenees - a sad moment after nearly seven weeks, but happy that the objective was achieved and that there were numerous memorable moments.

Now to download the photos ... (2000 of them, and the first technological challenge of my return as the Canon G16 has decided it doesn't want to communicate with our computer)

Back to Index
Posted by Phreerunner at 10:44 6 comments: