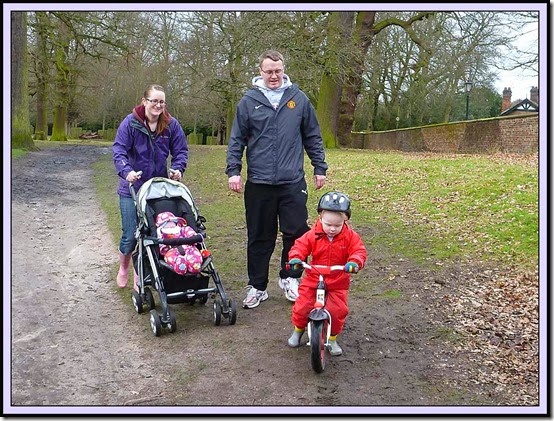 After an easy journey home, albeit having to spend seven hours in Philadelphia airport (planned, they have comfy rocking chairs) we were home by 9am on Tuesday. Sue went straight to work, but I had the pleasure of a trip to Dunham Massey with Kate, Simon, Jacob and Jessica.

This time Jacob managed to negotiate the mud, and he also failed spectacularly to fall in a giant puddle. Jessica was unmoved by the whole experience.

The new Visitor Centre is open and the old entrance to the grounds has been blocked off, forcing visitors through the new centre, presumably in a bid to get them to spend money. Yesterday that involved a trail of mud through the room from the hordes of push chairs and toddlers’ wellies. A diversion was required to feed the ducks, and a new pathway was completely flooded. The centre was late opening and looks a mess, as was staffing at the old but still open restaurant area, where there were longer queues than usual, perhaps due to theft of some of their staff by the new café area near the Visitor Centre.

Aside from these teething problems it was nice to be able to enjoy a warm, sunny and very green day, with crocuses lining the canal towpath as I walked home from Broadheath. 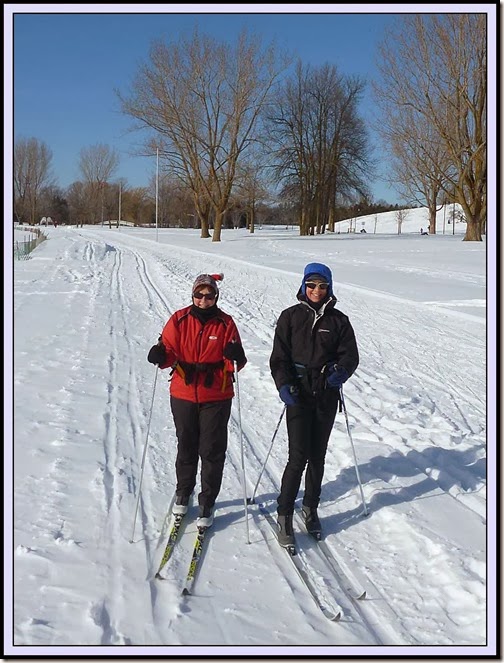 Cold and sunny today – minus 18C including wind chill.

We are on a Beach Holiday, so after a morning of R&R, a trip to Mooney’s Bay seemed in order. We did a couple of circuits – about 9 km – before heading back to Quinterra Chalet. 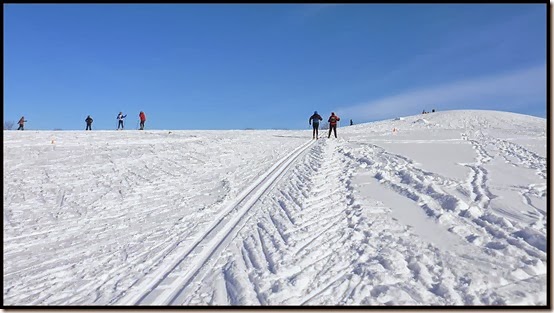 Where we enjoyed food appropriate to this excellent Beach Holiday. 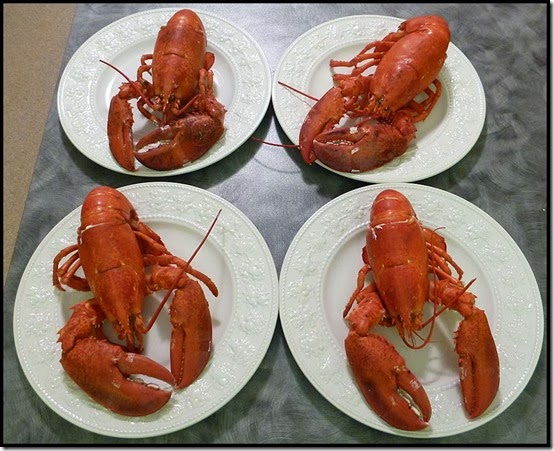 So that’s it for this year’s North American sojourn. All being well, the next entry will be from the environs of sunny Timperley, leaving Ken and Helen to get on with their lives, though we should be seeing them again soon. We do thank them for putting up with our foibles for the last couple of weeks.

Posted by Phreerunner at 02:34 No comments: 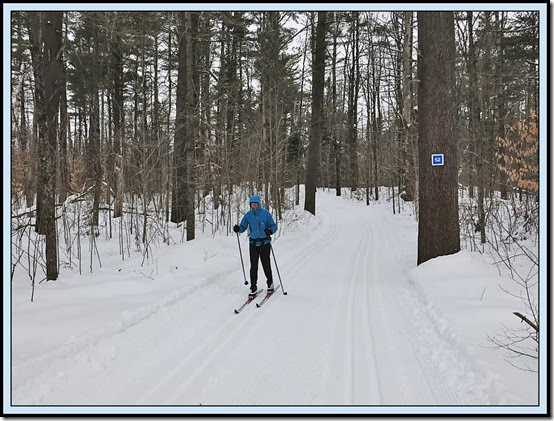 On a warmer day, Ken left at 7am to complete the 51 km Gatineau Loppet in 4 hours 49 minutes in excellent conditions. The point to point course took him all the way across the park from P17 to P2. I wish I’d entered.

Helen dropped Sue and me off at P17 (Wakefield) over an hour after the Loppet had started, and we headed along freshly groomed trail 52, a gorgeous trail, to join the Loppet route at the junction with trail 50 after about 8 km. All except one person on the Loppet had already gone through, but the trails in the opposite direction were in great condition despite the fact that about 500 skiers had just sped through on them.

The weather was brightening all the time as we reached Renaud cabin for lunch and rendezvoused with Helen, who’d skied in from P19 (Philippe). 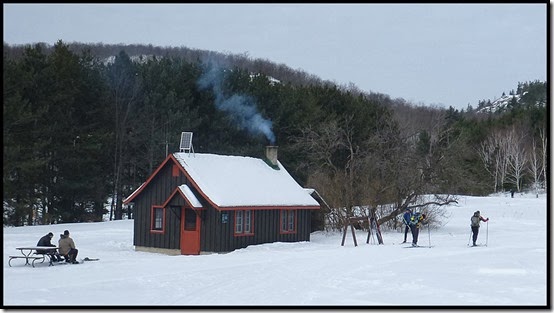 Trail 55, the Taylor Lake Loop, is one of the most scenic in the park. It passes several yurts, like the one shown below, and a number of camp sites. All seemed to be in use by various groups, mainly youngsters, enjoying the outdoor life. 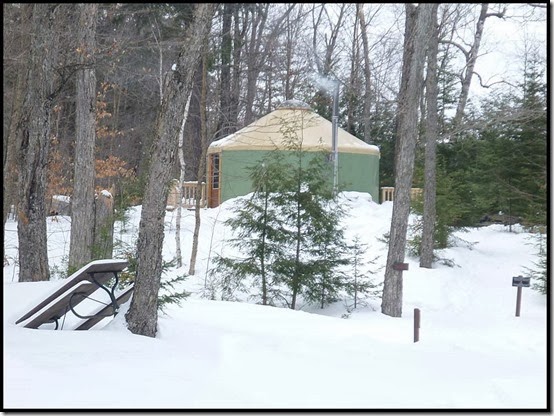 The three of us continued around the lake, passing a turtle breeding area. 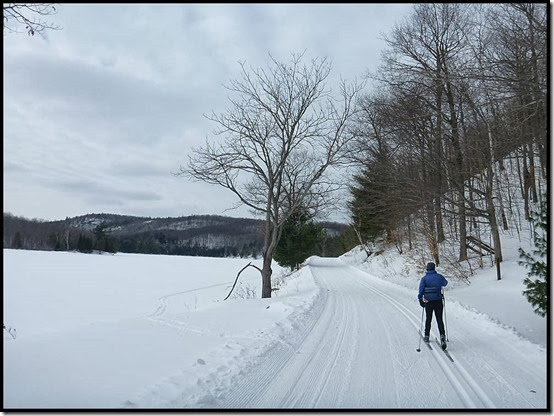 After about 6 km, the scenic loop rejoins parkway trail 50, but a much better route back to the P19 car park at Philippe is along trail 51, which after the long ascent on which Sue and Helen are pictured below, sweeps majestically down for the best part of 2 km. 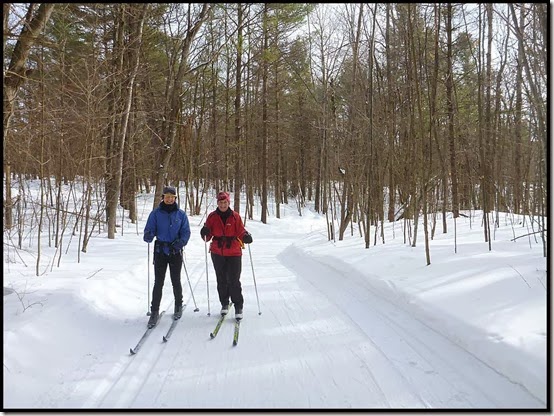 This 22.5 km route (Helen’s was about 5 km shorter) completed the majority of Gatineau Park’s major routes for me and Sue on this trip. We’ve probably covered around 150 km of different trails since we arrived. It’s a brilliant venue in that respect.

Ken was quite tired after the Loppet, so it was just as well that I’d dug a path to the barbecue on which he cooked our traditional end of trip steaks. Not that it’s quite the end of this trip…