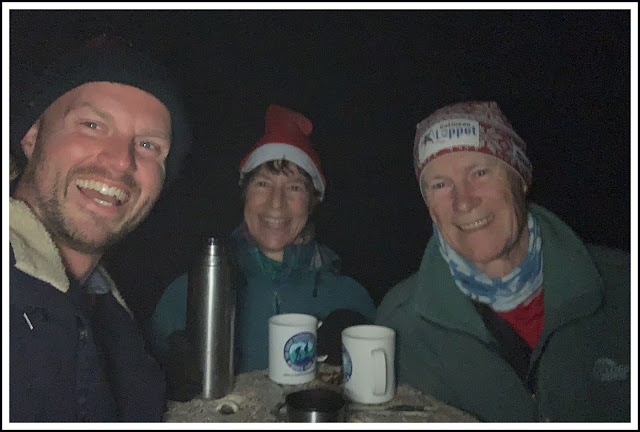 My nephew Toby was the only person to join me and Sue on our annual evening stroll up Shutlingsloe. We enjoyed a good 'catch-up' and some of the best weather we've had on this outing, though sadly the summit was engulfed in mist. The full moon shone through, and torches were needed only for the sharp descent from the windless summit, where we had enjoyed mint tea and chocolate caramel shortbread, but sadly no sing song.

That's it really. We saw one other person and none of us fell over. We adjourned for beers and a further hour's chat at the Leather's Smithy, during which Toby enquired as to the history of this annual tradition.

Here's what I wrote in 2013, and I've updated it for subsequent years:

This was what has become a ‘traditional’ pre Christmas romp up to the summit of Shutlingsloe, which is usually a bit breezy on top, but not sufficient to deter us from supping some hot drinks and handing round some cake before heading back down to Trentabank, and thence to the Leathers Smithy for a beer.

Tonight was one of the best we have had, both turnout and weather wise. Thirteen of us on a lovely moonlit night, so torches were completely superfluous.  Views from the summit extended over the whole of Greater Manchester to Winter Hill.  Children who used to whinge a little sprinted ahead, separating the group on descent as only the fittest could keep up with them. Well done, Andrew, Kate and Joe, and it was good to see my nephew Toby turn up from near Nantwich, and Graham B’s granddaughter was also most welcome.  I hope she enjoyed it.

Altogether a very enjoyable and sociable little excursion, and there’s not much more to say, but below the photos which follow, by popular request, I’ve added a summary of the walks which have led to this minor event becoming a ‘tradition’ amongst a small group of family and friends. It’s interesting to see that people have only started to turn up in good numbers since I upset them by changing a venue that they had got used to seeing on the programme but until then hadn’t bothered to come along. The first of these evening walks up Shutlingsloe was in 2006, when Sue and I were joined by Andrew and Sheila. Only Andrew and I have attended all eight of the walks, and I’m amazed by the short period of time required to create a so-called ‘tradition’.

17/12/2013 – 13 attendees, clear, calm and cool at Trentabank, ground frost higher up making the rocks and grass a little slithery.

20/12/2011 – 17 attendees, calm, cool and misty on the summit.  I’d tried to break tradition by changing the venue to White Nancy, on 9/12/2011, when only three of us had attended, and a rebellious element had insisted on going up Shutlingsloe ‘as usual’.  I was chastised for breaking with tradition, but it did give me a chance to write about the history of White Nancy.

[Hover mouse over the type in black, and click, for the links to reports, or from 2013 click on the date for the link.]

Posted by Phreerunner at 15:44 No comments: 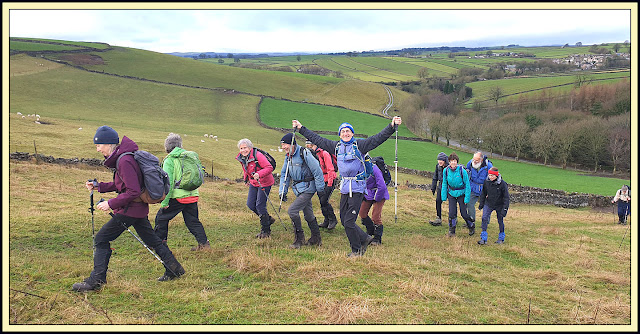 Having had to cancel this walk last year, and with clouds of further Covid Omicron doom rapidly descending, it was a pleasure to host this walk for 20 participants, plus Andrew at the pub awaiting the installation of a new knee, but sadly minus Paul with a stomach upset.

The route was familiar, albeit I made a couple of small navigational errors. From the car park south of Tideswell, we set off more or less on time at 10:30, and were soon rising above Tideswell Dale on the path to Tansley Dale. 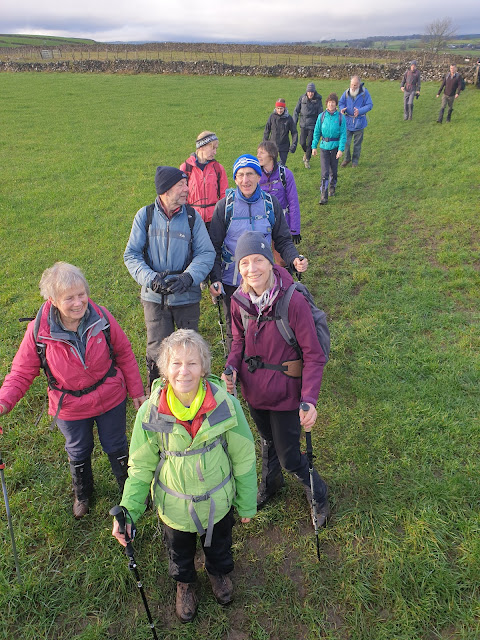 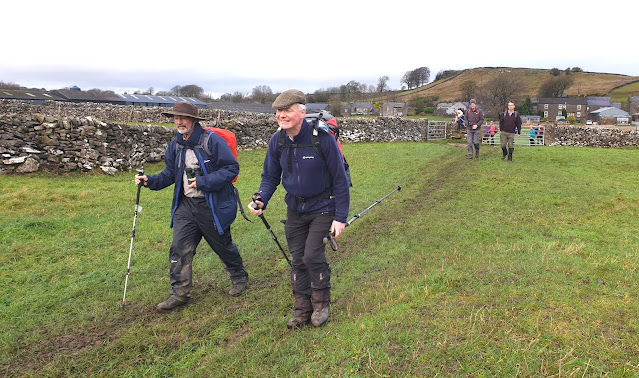 The weather was fine and we were all in good spirits. Gatherings such as this one have been few and far between for the last couple of years, and thankfully everyone had registered negative Covid lateral flow tests before joining us today. 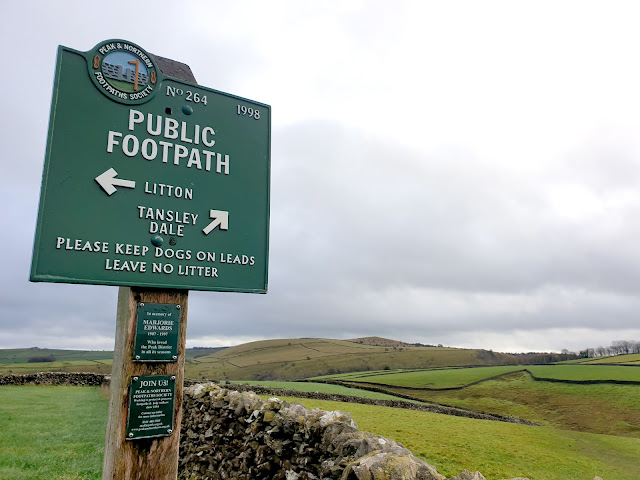 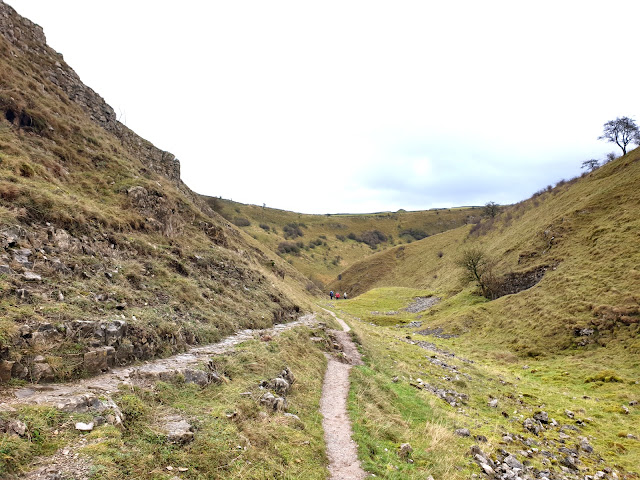 Tansley Dale was showing signs of recent high rainfall as the weather brightened. 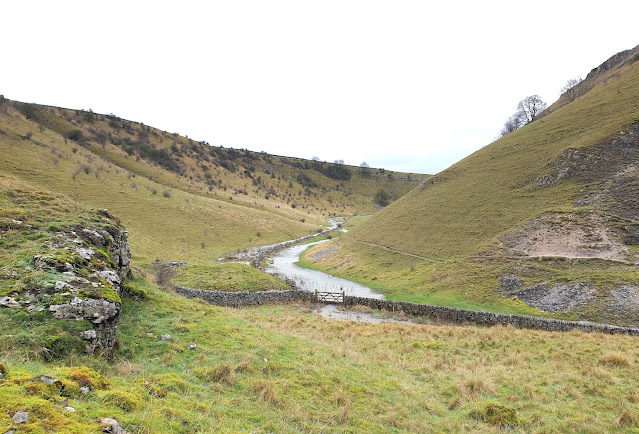 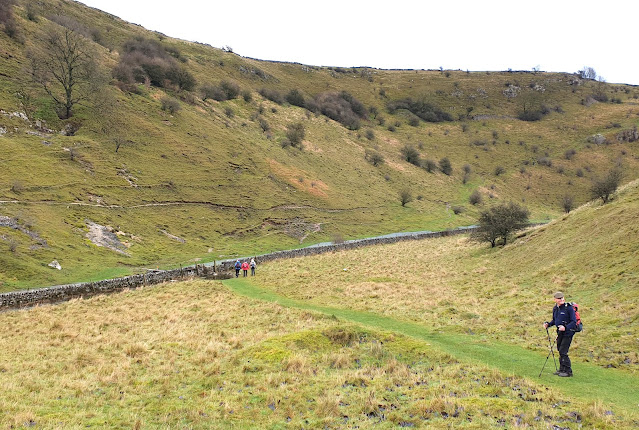 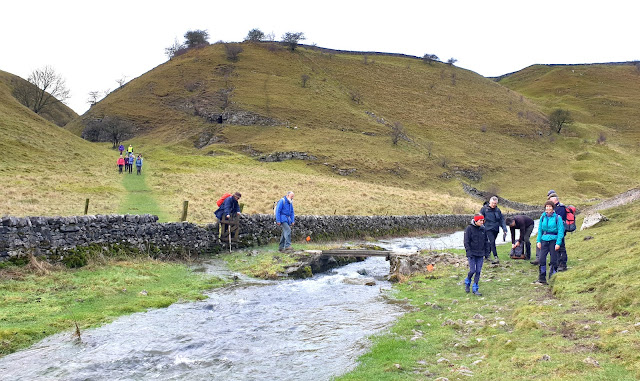 Don managed a couple of long slides on the descent, and whilst the rest of us enjoyed an elevenses break supplemented by Sue's chocolate caramel shortbread, he appears from the next picture to be practicing his forward roll technique! 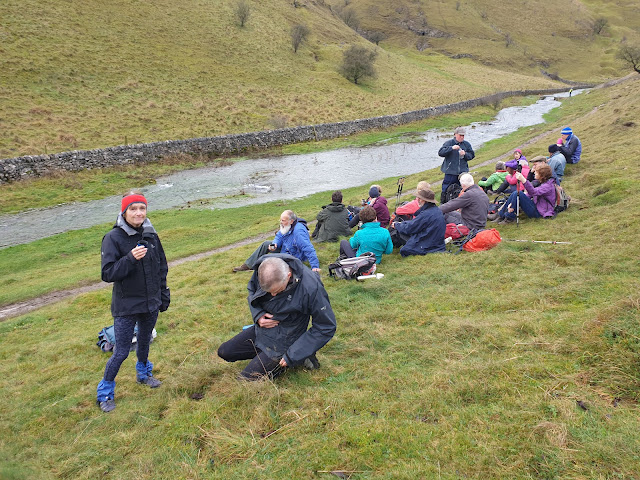 We were soon ascending towards Wardlow, meeting a lone runner taking part in the Litton fell race who had been misdirected by a marshall, as a result of which his lead had been increased by over a mile.. 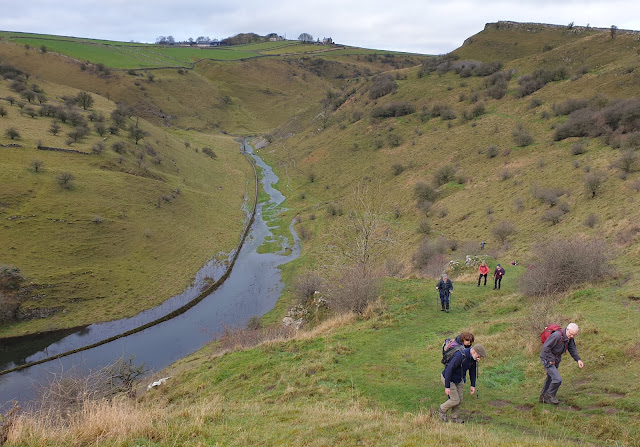 Then I climbed a stile that the fell runner should have used but that wasn't on our route. Some deja vu, as I'd made the same mistake in the past. This resulted in a rare picture of our professional back marker, who accidentally found himself stalking along in an unfamiliar position. 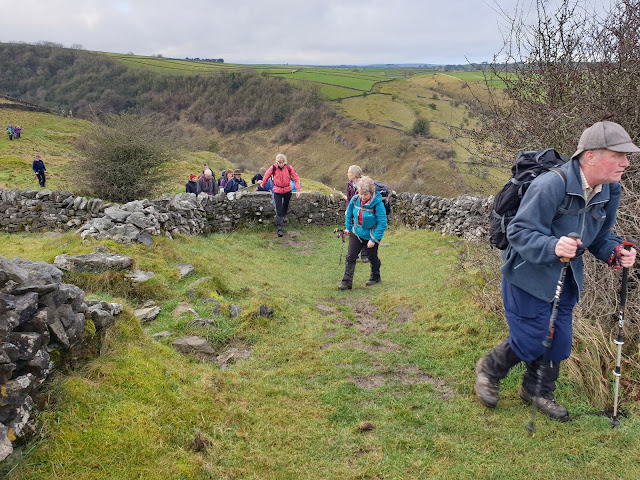 The sun came out as we continued towards Crossdale Head. The stiles are a bit tight here; Julie got stuck for a while, but we were making good progress and we arrived at the Crispin in plenty of time for our one o'clock lunch booking. 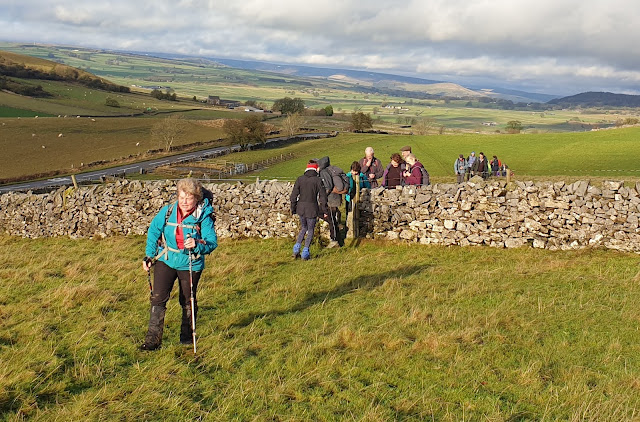 Jenny and I, between us, took a few snaps of the assembled gathering. I think all 21 of us feature in the next few pictures. Well done, Jenny. 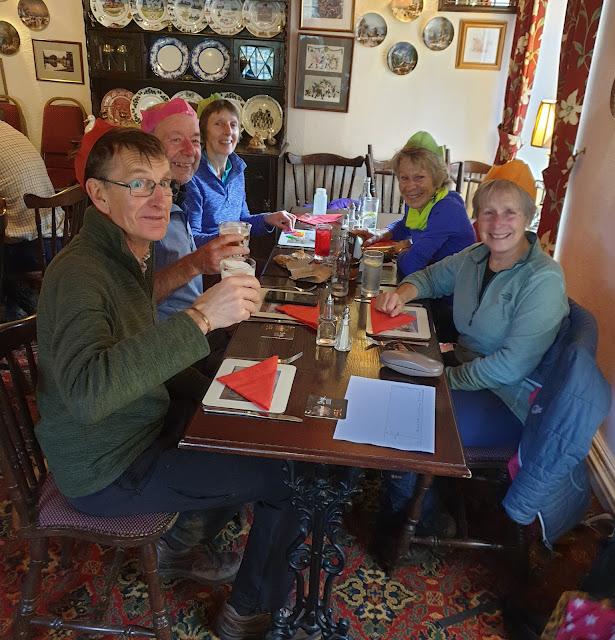 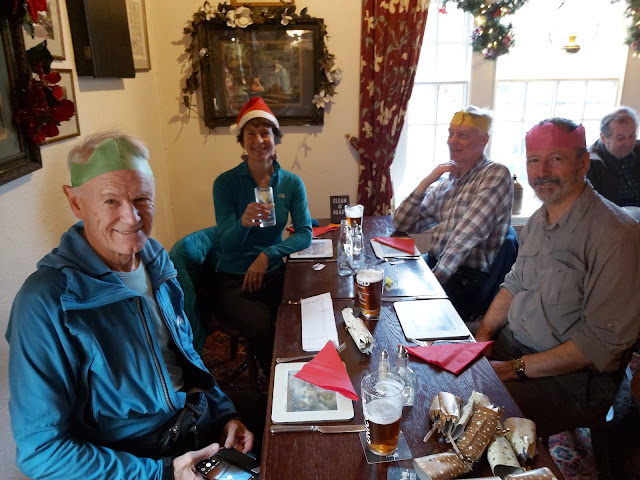 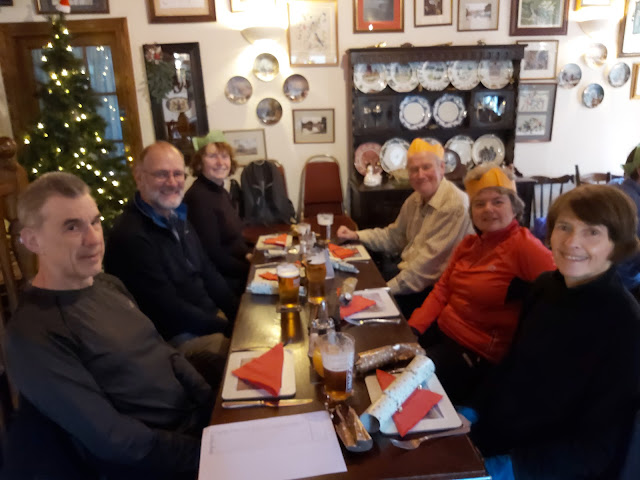 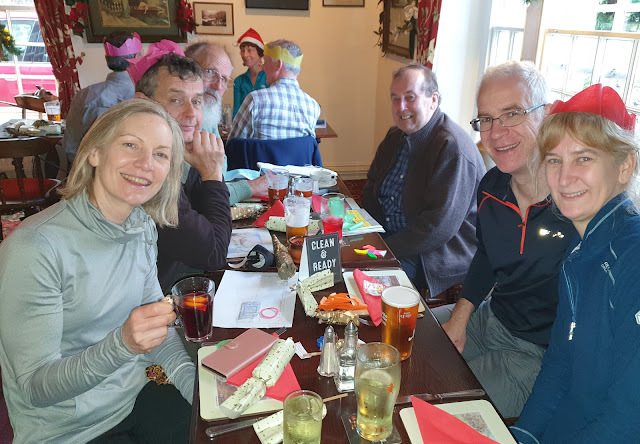 Nobody complained about the absence of a quiz, and the food was excellent, as ever.
A couple of hours later, we bade farewell to Andrew and set off towards the Monsal Trail, our customary afternoon route, suitable for chatting and for walking on through dusk into the darkness of a December afternoon. 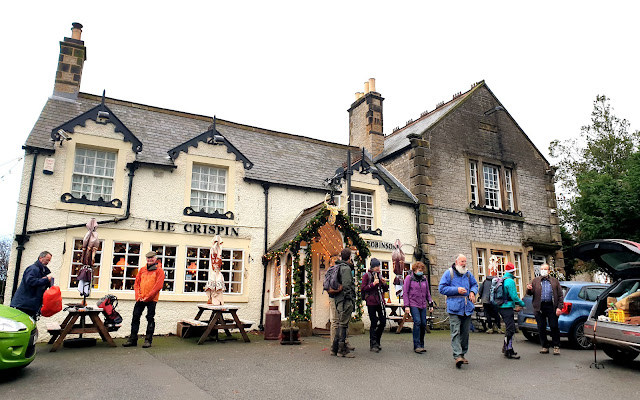 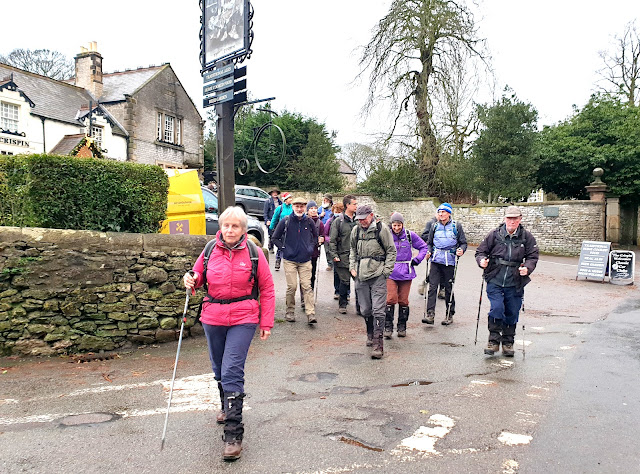 An advance party waited on the Monsal Trail whilst nearby cyclists sped back towards Hassop in the last remnants of daylight. 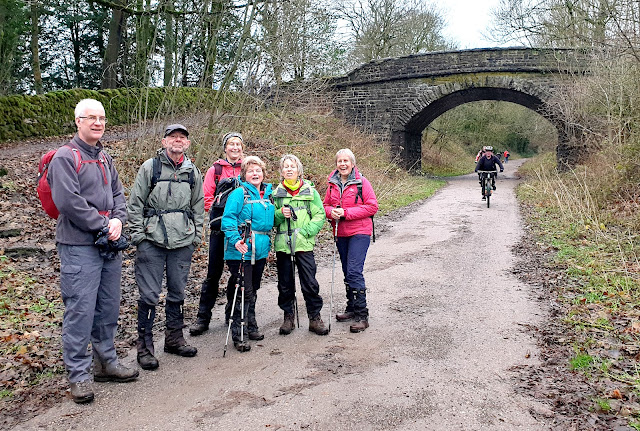 The Monsal Head viaduct afforded the chance for a final couple of snaps before light levels descended towards night time levels. 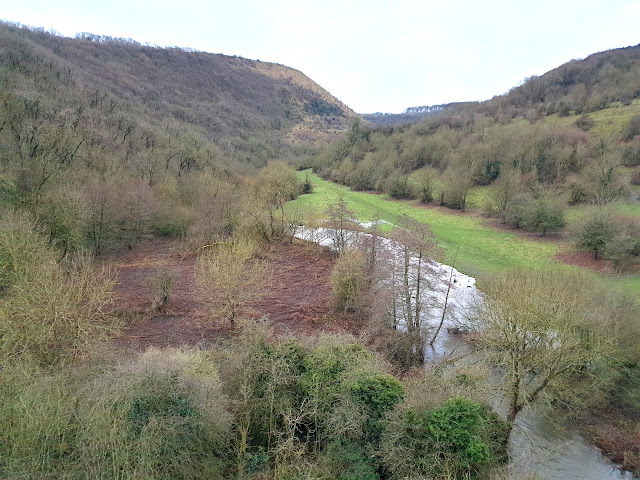 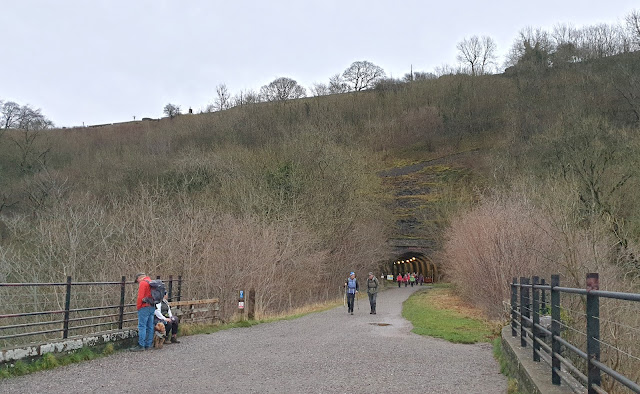 Eventually, torches were deployed, the pace slowed, and we ambled on happily towards the car park and dispersal to various parts of the country, some folk having made long journeys to join us today. 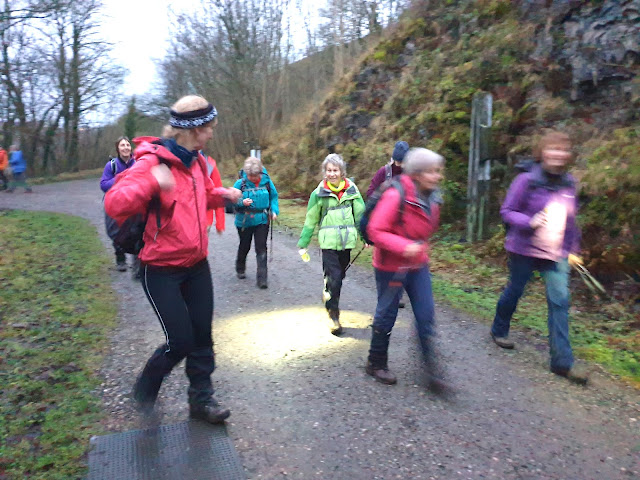 Here's the route - 15 km with 400 metres ascent, taking quite a while at a leisurely pace. 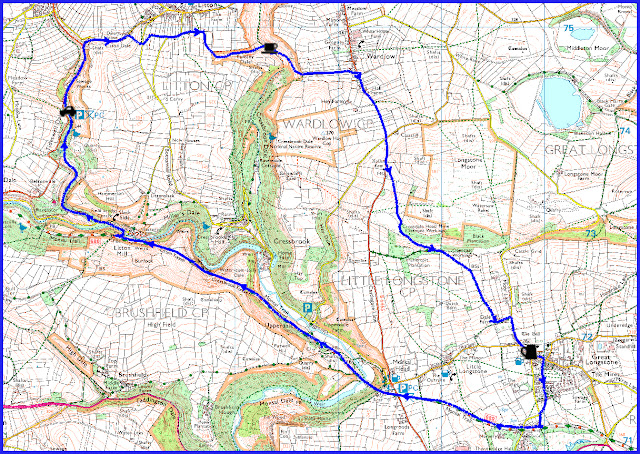 Thanks everyone for coming along; that was a most enjoyable day out. The Crispin excelled itself and I think everyone is happy to re-book it for next year. I'd like to do it on Sunday 18 December 2022, a week later than this year, so that those who want to take part in the Tatton Yule Yomp 10km race can do so on 11 December. Let me know if you would prefer 11 December and if most people want that, we'll forgo the Yomp.
Posted by Phreerunner at 11:23 No comments: