This was our annual pre Christmas pilgrimage from Trentabank Car Park to the summit of Shutlingsloe and back, featuring numerous people and some terrible photography.
This year Sue and I managed to arrive in plenty of time to greet the other 14 folk who joined us on this jolly jaunt, but I had forgotten to bring a torch, and Sue's torch failed. There was no moon, so we couldn't see much! I blame that for some of the awful pictures, all of which were taken during our half hour break on the summit and are shown below.
It was a clear, starlit night, with good views over Greater Manchester.
The relatively warm night meant that the usual ice on the rocks leading to the top was absent, so it was an easier walk, all 5 km of it, than usual.
On the summit, once the spiced rum, mulled wine, tea, coffee, brownies, stollen bites and other goodies had been consumed, a short carol concert was held, finishing with a rather flaky rendition of The Twelve Days of Christmas. I suspect the standard of the singing may match that of these photos, so it's perhaps just as well that (to the best of my knowledge) no recording was made. 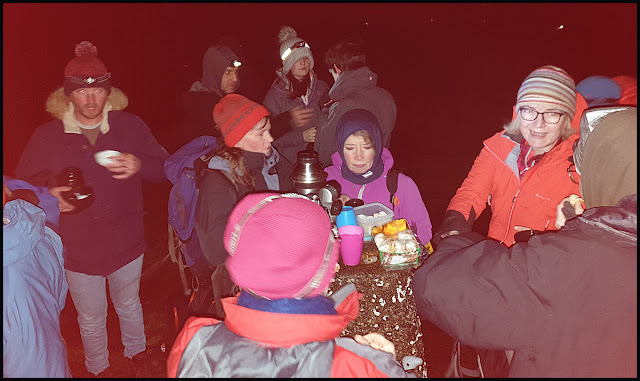 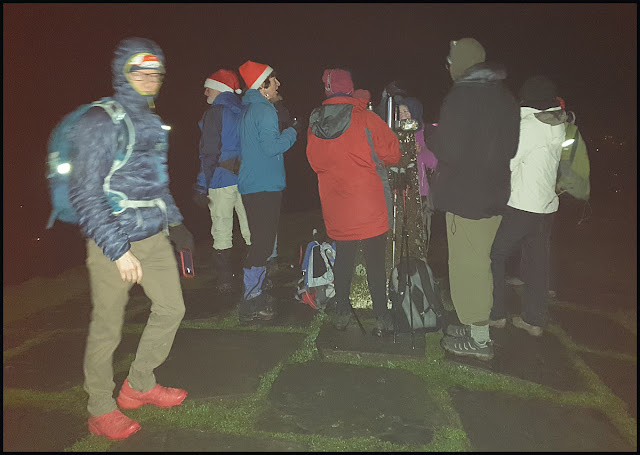 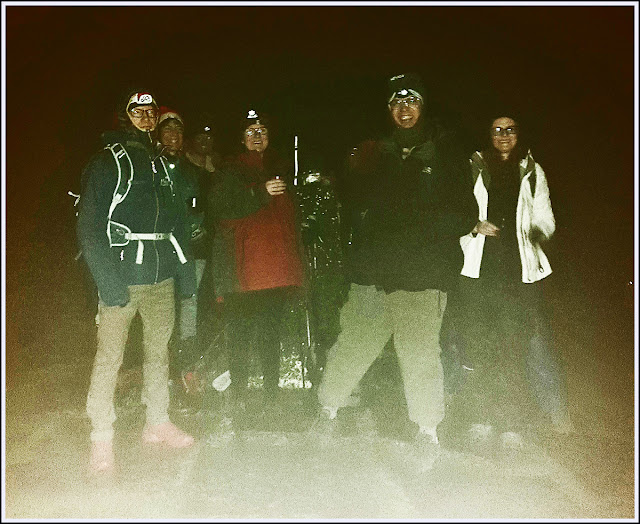 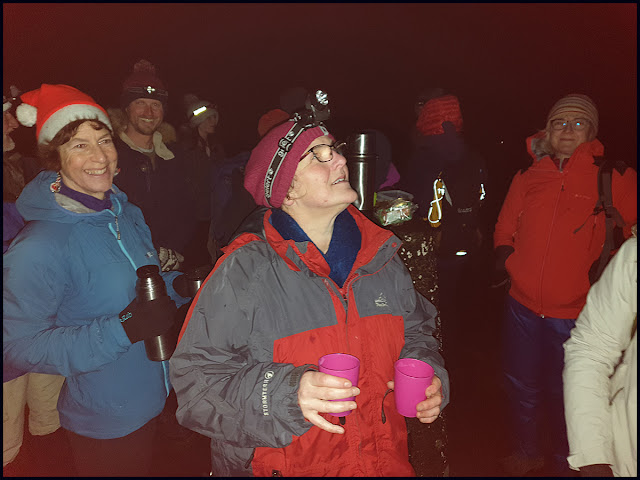 We gradually made our way back down to Trentabank from the cool summit, whence a short drive found most of us rehydrating in the Leather's Smithy outside Langley. We were there for some time.
Thanks for coming, everyone - this walk seems to attract a few people rarely seen on my walks, but who are SWOG regulars, parkrunners, or in Toby's case a rarely seen nephew who turns up here without fail.
Any better pictures that may have been taken would be very welcome. Other ascents of Shutlingsloe, including previous 'night' visits, are recorded here.

Why is Toby "rarely seen" and what makes him venture out on such a niche gathering?

The council will be sending you a bill soon for track repairs you are there so often. I think next time it should be a blindfold walk.

Conrad, Toby is my nephew who doesn't really do 'walking' but who joins us on this annual jaunt out of a desire to 1. keep in touch, and 2. do something quirky...

Alan, thanks for your separate email, and enjoy Anglesey. I hear there will be a new and very expensive toll on the Menai crossings for non-residents from 01/01/20, so I hope you've taken plenty of dosh.

Without torches, it was pretty much a blindfold walk for me and Sue.

Well I certainly couldn’t afford to live here that’s for sure. And there are so many unwelcoming signs on gates and land I don’t think they are too keen on welcoming visitors either.

Welcome to Wales! The main designated paths like the Anglesey Coast Path are fine, but elsewhere the farmers and other landowners dictate where you can go (or often not go) regardless of so called public footpaths. That's my experience, anyway, but there's some lovely countryside to enjoy once you've come to terms with the rules of engagement (ie accept that many marked paths are not available to walkers).