M2 and M1 concluded their eight days of 'Travelodge Bagging' with a visit to this pleasant spot overlooking the Cheshire plain.

After refreshing ourselves at Rushton Spencer's excellent Knot Inn, we parked just north of Timbersbrook for this easy final circuit, taking the Gritstone Trail path to the summit and returning via the escarpment trods.

The late afternoon views were excellent, if a little hazy - Jodrell Bank, just eight miles away, was only just visible.

Then it was back to Little Italy (in Timperley).

All in all an excellent trip during which we appear to have bagged 5 Travelodges, 27 Marilyns and 1 'sub Marilyn' or HuMP (hill with a HUndred Metre Prominence). I now need to look for a pencil to mark up, and update, Alan Dawson's book.

I'm sure there's more to follow when I've downloaded some photos and the data from my Garmin Gadget.

Sent using BlackBerry® from Orange
Posted by Phreerunner at 09:52 8 comments: 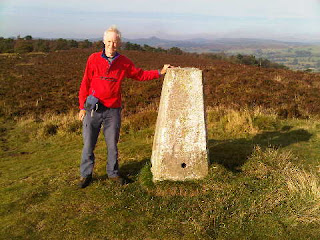 After driving through Midlands rain we found the Staffordshire countryside delightfully bathed in sunshine.

There are plenty of parking spaces on the road around SJ 968 609, from where a ten minute stroll to the north leaves you in the vicinity of Gun's trig point, with fine views towards Shutlingsloe (pictured) and over the countryside of Staffordshire, Cheshire and Derbyshire, which three counties meet at nearby Three Shire Heads.

Sent using BlackBerry® from Orange
Posted by Phreerunner at 09:31 No comments: 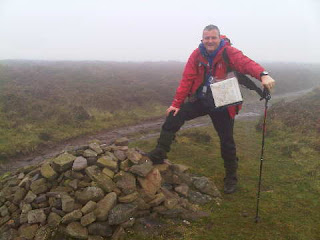 Having parked at SO 160 283 to climb Mynydd Troed we felt unable to shun the opportunity of climbing this little hill as well.

A father and his young daughter romped down the hill towards us as we took a short break on some rocks by the cars. We thought perhaps they thought we were car thieves (such thefts are common in this area), but it turned out that the little girl was in a rush to get to a nearby indoor climbing wall as soon as it opened.

We saw nobody else on the hill as we rose past Harebells and Tormentil, and sadly over lovely turf that had suffered recent damage from trail bikes despite a 'No Bikes' sign at the foot of the hill. Such a shame for those who regularly try to appreciate this otherwise quiet and pretty countryside.

A trig point that we visited appeared to be lower than the pile of stones (pictured) that marks the summit area. As usual, we tramped around a bit to ensure that M2's Marilyn Bagger's 'tick' could be entered in his copy of Alan Dawson's book without any question or doubt.*

By then one of the layers of cloud had either risen or lowered to envelope us for the rest of this pleasant amble as we retraced our route back to the car, and another cuppa.

* I'm writing this having returned home and spotted some messages from another inveterate hill bagger, Mike Knipe, who has pointed out that the list of 'Marilyns', like the list of 'Munros' (Scottish mountains over 3000 feet high) is a dynamic thing, which changes as more accurate surveys are carried out. So Alan Dawson regularly updates his list. Consequently the 'original' numbers used in this series of postings are probably all now wrong, and Raw Head no longer meets the criteria for inclusion in the list. That doesn't of course stop it being a good walk though! Thanks Mike, and I hope you agree that whilst on one hand 'ticking' these lists of hills can become a little compulsive, they do without doubt provide a stimulus for us to visit different hills rather than deepen the grooves in just a few favourites. Certainly the variety afforded by this current trip has been remarkable.

Posted by Phreerunner at 08:33 No comments: 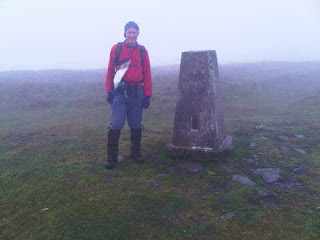 There's a good parking space to the south of this hill at SO 160 283. By the time we arrived there the Monday morning rain had stopped and we were able to climb steeply between layers of cloud, one of which (as you can see) nudged the summit of the hill.

There's evidence of lots of pony trekking hereabouts, though we saw nobody engaged in that activity today. The hill was empty.

We made the walk into a pleasant circuit of around an hour by continuing down the hill's northern ramparts for a short while, before turning sharply to the WSW down a path that led to a good bridleway around the bottom of the hill and back to the car.

Sent using BlackBerry® from Orange
Posted by Phreerunner at 07:57 No comments: 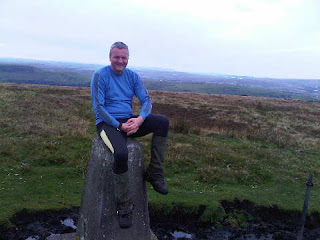 Put 'Nantyglo' in the SatNav and then follow signs to the 'Round Towers' to reach the start of this walk.

We concluded that signposts to Welsh antiquities must be compulsory, whereas there is no requirement for parking facilities or even access to such antiquities. Here, roadside boulders and 'No Vehicles' signs made the parking issue clear, whilst a snarling allocation made the access issue even more transparent.

After parking in a nearby bungalow road, we set off up an unsurfaced lane that soon wended its way through an empty golf course. Sticking obstinately to the lane, which eventually deteriorated into a steep trod up the hill, we continued relentlessly to the 550 metre summit. M2 sat dutifully on the rather uncomfortably eroded trig point, surrounded by views of Welsh valleys under high cloud that had rolled in to announce a change in the weather.

Continuing south east, we rejoined a vague path and descended steeply. The paths are marked better on the map than they are on the ground hereabouts (though they certainly exist), so the GPS came in handy. Thus we negotiated our way to a lane from which we could at least see the ancient Round Towers, but a close inspection proved impossible.

Sent using BlackBerry® from Orange
Posted by Phreerunner at 22:50 No comments: 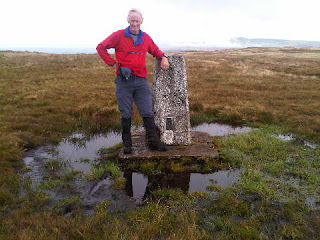 From Fan Nedd's trig point a walk back towards the Cairn brings you to a path that leads down to Bwlch Duwynt. Alternatively you can take a north western short cut down grassy slopes to reach the path, like I did, or you could even employ M2's cross country western approach - but be prepared to keep any companion waiting if you do that!

We'd seen some vehicles on the Land Rover track below Fan Gyhirych and wondered what they were doing. The track itself presents an ugly scar across the pristine hillside, but I'm sure it wasn't built for the paragliding enthusiasts who were using it today, so good luck to them.

On reaching a cairn near Fan Gyhirych's summit, we enjoyed our lunch in the company of a local couple, whilst watching the paragliders trying to make the best of a windless day. A couple took off, and proceeded to plummet like stones to the valley below, under the watchful eyes of chatty crows and defecating red kites (there's a feeding station nearby).

After half an hour at this lovely spot with fine views towards, inter alia, Titterstone Clee Hill, we adjourned for our now traditional (has anyone noticed? probably not) summit photo. It was my turn. This summit had a moat that reminded me of the bad old days at Black Hill!

Luckily, M2's 'Rules for Marilyn Baggers' tome required him to touch the trig point, so his boots also got a dunking.

After that we headed back east taking the least line of resistance, part of which involved a boggy path beside a wall to the north of Fan Nedd. M2 fell behind again; 'he's getting tired' I thought. It turned out that despite not having had to cross a fence he had contrived to rip his hand on some barbed wire. "Have you got a plaster?" he whimpered from above a pool of blood as I sat on a bench enjoying the last dregs of my flask of tea in view of .... Titterstone Clee Hill? That made me feel guilty about telling the Welshman with a can of Carling, with whom I'd had an interesting "where's the pub" "I don't know" encounter a little way up the hill, that my 'lazy companion back there only speaks Gaelic'. Luckily, there were no repercussions, and M2's hand injury was easily repaired.

Posted by Phreerunner at 21:58 No comments: 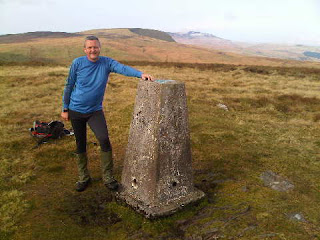 Fan Nedd is easily ascended in half an hour or so from point 446, at the top of a hairpin on the minor road between Heol Sennl and Ystradfellte. Whilst the summit, and in particular the cairn to its north, sports fine views, it would be a shame not to extend this outing (as we did) by heading west, in the direction of the summit photo above, to complete a choice of worthy circuits or linear walks.

Those simply wishing for a short stroll should budget about an hour, there and back from SN 923 196.

Incidentally, today we could see far out to sea to our south, and far into Shropshire and mid Wales to our north. I couldn't identify many individual distant hills, but from her perch on Titterstone Clee Hill (and perhaps Brown Clee as well - has she taken up Marilyn bagging?) Sue tells me that today the distinctive shapes of both Pen y Fan and Cadair Idris were clearly visible.

Shouldn't she be at home doing the housework?!

Sent using BlackBerry® from Orange
Posted by Phreerunner at 19:26 No comments: 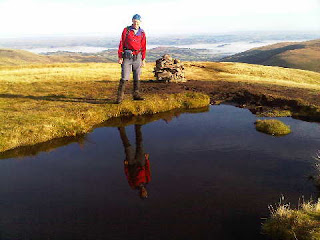 This hill is easily ascended from the Storey Arms Centre, via an initially boggy path, but enthusiasts could make a meal of it and start from the lay-by at SN 971 222.

Today spring was again in the air and you can even see a cloud inversion (well, slowly dissipating morning mist) behind me in the summit photo.

I expect you've been up here as well, Alan, and I'd be surprised if you haven't managed some of (yes, you will finally be able to breathe a sigh of relief) tomorrow's final instalment of this series of postings.

On our descent from the scenic summit, with its resident pond for 'reflection photos', we paused to admire fine views including Pen y Fan. M2 stopped for a chat with a couple of chaps who'd been to Mera and Island Peaks, and I chatted for a while with a runner who was training for the OMM (a tough mountain orienteering event) which is taking place in the Howgills in a few weeks' time.

After an hour and twenty minutes on the hill we were back at the Storey Arms car park just in time to enjoy Denise's first brew of the day (£1 for a cup or can of anything) together with some complimentary shortbread. She told us all about her 'Storey Arms Refreshments' kiosk, from which she's been making her living for the last 22 years. She's been up Pen y Fan once - "just to see what it was like, since so many people ask that question".

Sent using BlackBerry® from Orange
Posted by Phreerunner at 18:43 No comments: