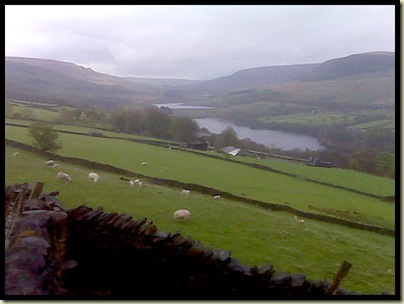 After the previous night’s excitement of being transported back to the Drakensberg and the Cape with about 25 friendly denizens of Stockport Walking and Outdoor Group, we commenced our ‘summer evening’ walks with this easy stroll from Tintwistle around Valehouse and Rhodeswood Reservoirs.

After the usual battle to get through Mottram in Longdendale, Sue and I parked just beyond our nominated starting point, the Old Oak pub.  A text message arrived from Andrew:

I spotted him hopping around in the vicinity of the closed pub, desperate…

Just up the road, the Bulls Head provided much needed respite from the rain, good beer, and most importantly for Andrew – a loo.  The friendly locals were bemused when we told them our plans….

Already a quota of ‘would-be regulars’ who had specifically requested some Thursday evening walks, had wimped out.  They are ‘fair weather walkers’.

Meanwhile, the Three Stalwarts set off up to Holybank Quarry and onto open moorland above Valehouse Reservoir.  During our sojourn in the pub the rain had miraculously eased, and the skies brightened sufficiently for a record to be captured on the ‘phone (see above), the camera having been left at home.

As we rounded Rhodeswood Reservoir dusk overtook us, and in light rain there was no sign of last night’s full moon.  A quiet lane (somehow I missed the Trans Pennine Trail) led us through a farm to a bridge high above the planned Trail.  Paths through fields took us easily to Padfield and back to the cars, after a sociable 10km, 315 metres ascent and 2 hours 20 minutes, during which time Sue learnt more about the forthcoming election issues from Andrew than she’d previously known about politics in her entire life.  Gripping stuff!

Here’s the (not entirely as planned) route that we took. 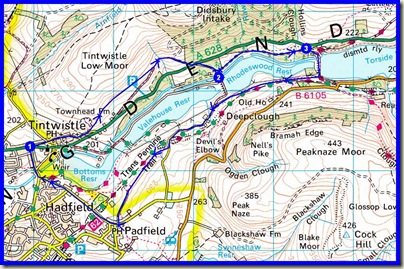 Walking in South Africa, and Tintwistle 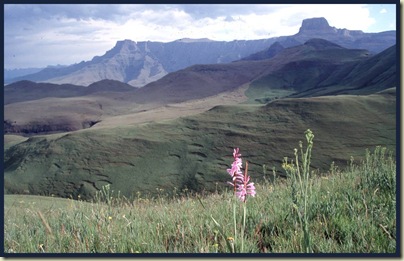 Whilst I’ve been away enjoying a Caledonian Trail, Sue has been dusting off a few slides for our talk to Stockport Walking Group on Wednesday evening (28 April).  It’s at 8 pm at Hazel Grove Civic Centre, should anyone else care to come along.

On Thursday we have our first ‘daylight’ evening walk – starting at 7.30 pm from the Old Oak in Tintwistle.  All are welcome, as always.

Posted by Phreerunner at 23:55 No comments: