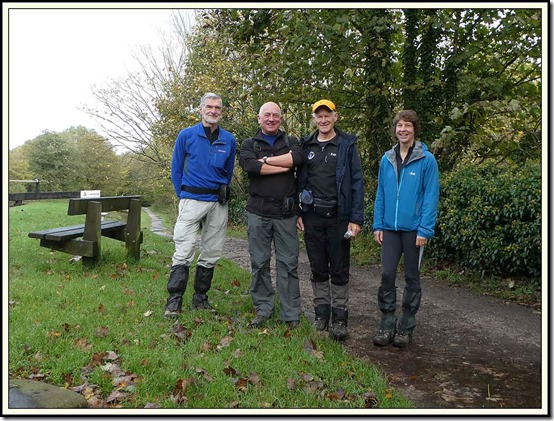 An assortment of apologies produced a quartet of strollers for today’s morning walk around Marple Bridge. We were pleased to see AlanR, who had set off in the middle of the night to get to the rendezvous point almost on time.

We started from the free car park opposite Brabyn’s Park, picked up Alan at the station, and headed past the tennis courts to join the Peak Forest Canal towpath on a sunny autumn morning. 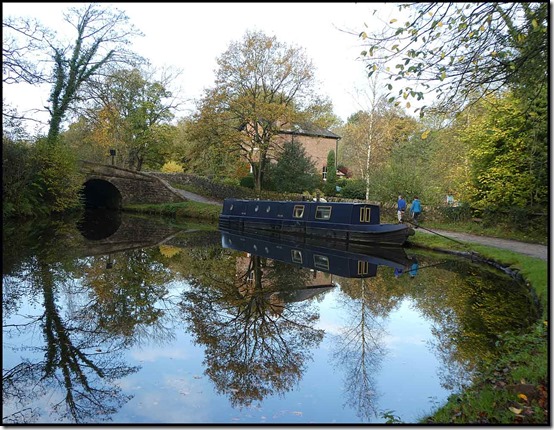 The aqueduct over the Goyt Valley from which the following picture was taken is impressive in itself; built in 1799 it remains (at 27.4 metres) the highest canal aqueduct in England and the highest masonry-arch aqueduct in Britain. It looks up to the even more impressive railway viaduct that dates from 1865. 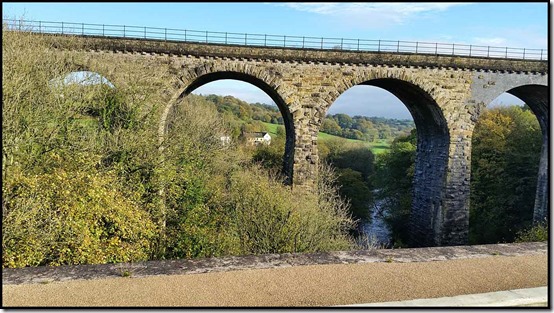 Thirty years ago these paths were a favourite route for excursions with my children. Kate would walk, with Mike in a push chair. I remember it being muddy, but not quite this muddy. Both Alan and Graham tested the electric fence on the right.

“Quite a kick” observed Alan. 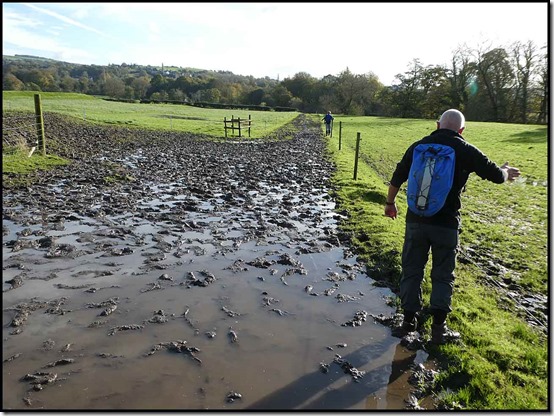 Luckily the horses in the field weren’t of the kicking variety, though they did whinge about not being allowed to share in the chocolate chip cookies that were being handed around. 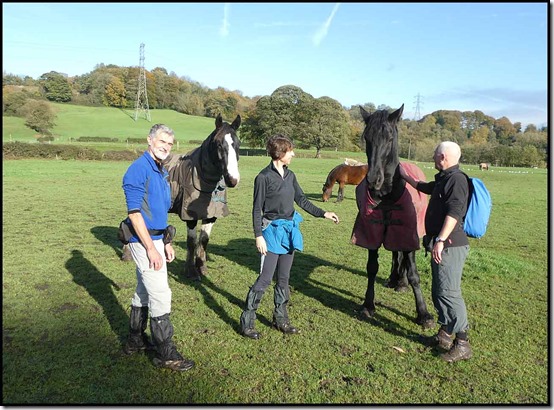 Appeased by chocolate, nobody complained too aggressively when told that the episode of mud and electricity was a mistake.

So we returned through the mud to pass in front of Lower Watermeetings Farm on a well marked footpath. We were soon beside the River Etherow, leaving it to climb steeply and cross the road above Compstall. Today’s route then continued along a path I’d not walked before, beside Gigg Brook to a footbridge. 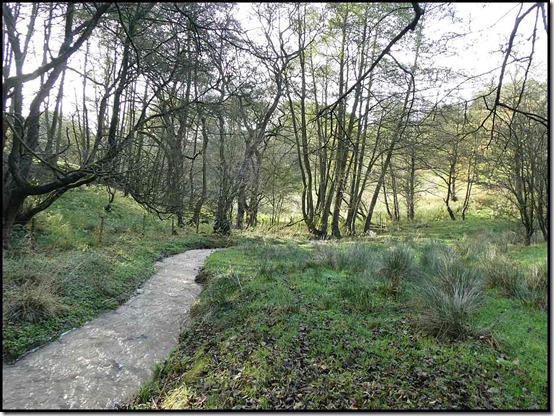 From the footbridge, Sue insisted that I took a photo of these impressive fungi. I’ve failed to identify them I’m afraid. 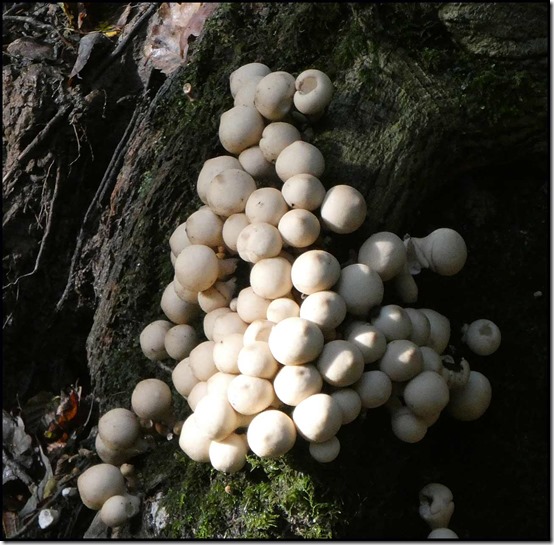 After taking the narrow lane past Campville Farm we descended Mortin Clough to reach the wide paths of Etherow Country Park. There were lots of people taking advantage of the sunny weather to walk their dogs and children.

Etherow Country Park appears to be a haven for Mandarin Ducks. There were many smart looking specimens, and the ladies were in much better shape than ‘Mandy’, our local lonesome mandarin who thinks she’s a mallard. 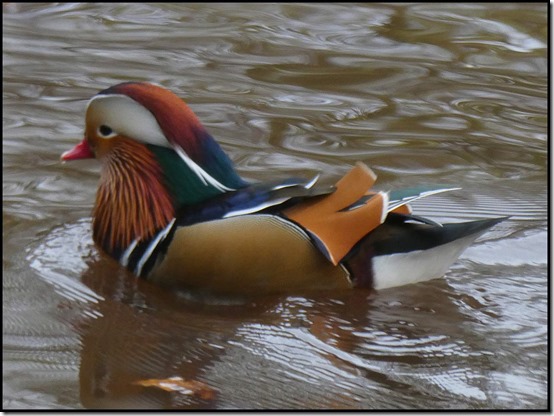 There was a mine around here, and several mills, some of which are still standing, as there was plenty of water to provide power. There’s a small lake in the Country Park, which was once the mill pond. Following the closure of the mills the area became one of England’s first Country Parks, later gaining SSSI status in 1977. 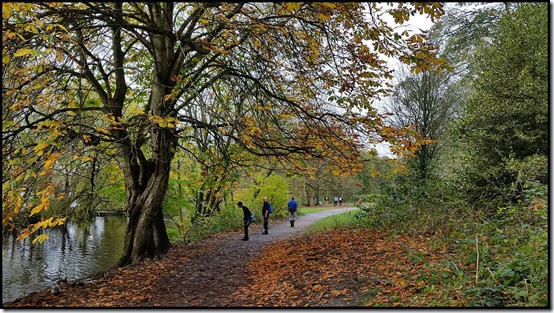 We paused for coffees all round at the excellent café at the entrance to the park where ‘special needs’ staff are sympathetically employed.

Across the road is a sad building, the George Hotel. 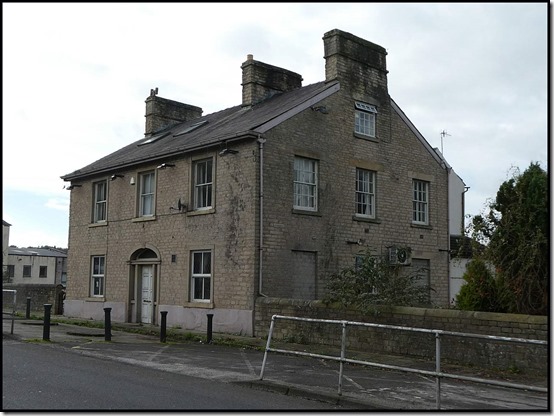 In days quite long past, when I arranged Wednesday evening walks all summer to provide a mid week respite from stressful work, the George was a thriving pub with good beer and a superb bowling green that always seemed to be in use. Somewhere, buried within several large boxes of photos and negatives, I’ll have pictures of it in that heyday of around 20 to 30 years ago. If I find one I’ll insert it here. Meanwhile, the internet claims that the following image shows the Hotel in its ‘heyday’. 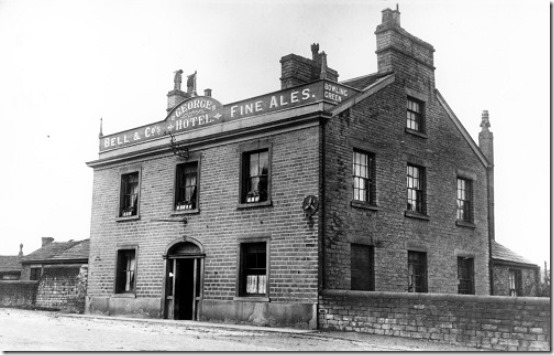 Just up the road, a path leads over an iron bridge into Brabyn’s Park.

The carriage bridge dates from 1813, just a few years after the canal was opened. It’s a historic cast iron structure, made in Salford Iron Works, and it survived until 1990 with very little maintenance. But then it was declared unsafe and a Bailey bridge was used whilst funds were raised for restoration work that was completed in 2008. So I’ve probably crossed by the Bailey bridge (now dismantled) more often than by this lovely old iron bridge. 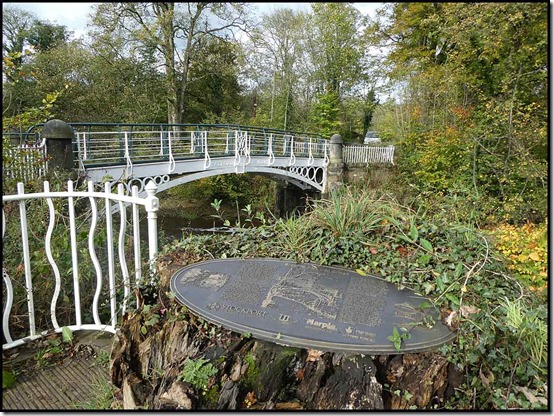 A stroll beside the river brought us out opposite the car park, with plenty of time for Alan to wander back up to the station and rendezvous with Sheila in Manchester. The rest of us returned home for lunch. 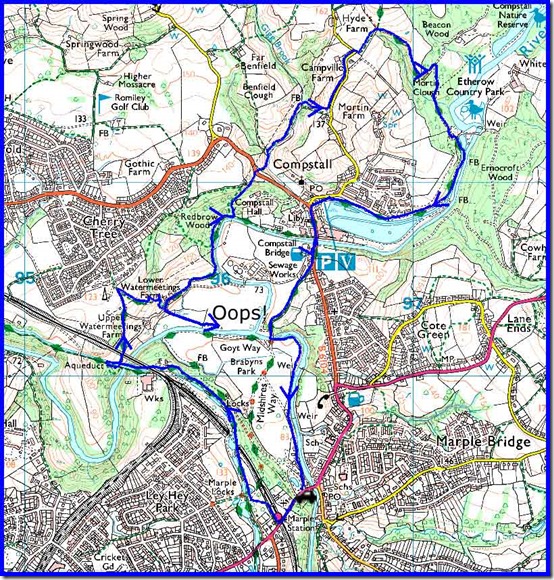 AlanR’s excellent report, featuring much better pictures of the aqueduct and viaduct, is here. Thanks Alan. 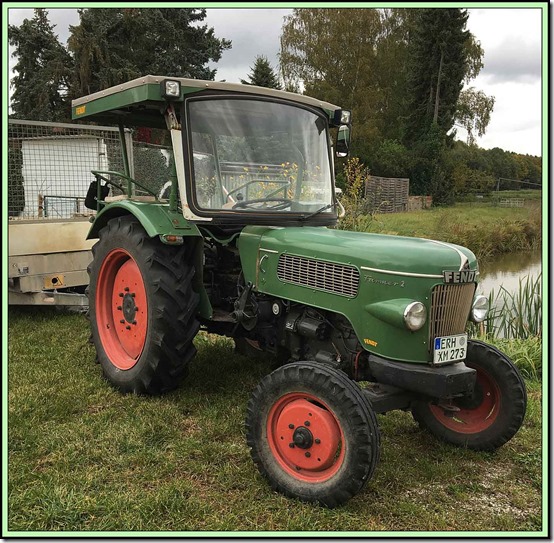 This rather smart Fendt Farmer 2 supports AlanR’s colour coding observations detailed in his comment on the previous ‘tractor’ posting.

Thanks for the excellent picture, Nick.

AlanR has commented as follows:

The Fendt Farmer 2 is a nice machine. Not cheap. Made in the early ‘60s. I have never managed to see one close up but I did know it from brochures. A 3 cylinder engine producing about 45 hip. The tractor never had a cab as standard, it was an add on accessory. You can tell by looking at it that the cab just doesn’t look right. They weren’t into operator comfort then. That front screen must have cost a fortune to produce and it was also hinged so that it would push outwards. Why they wanted this I’m not sure, it seems over elaborate. Thanks for sharing the picture.
This one is registered in Erlangen-Hochstadt in beautiful Bavaria. (I had to look that up).

Thanks Alan, I thought this extra information was worthy of inclusion in the main text. 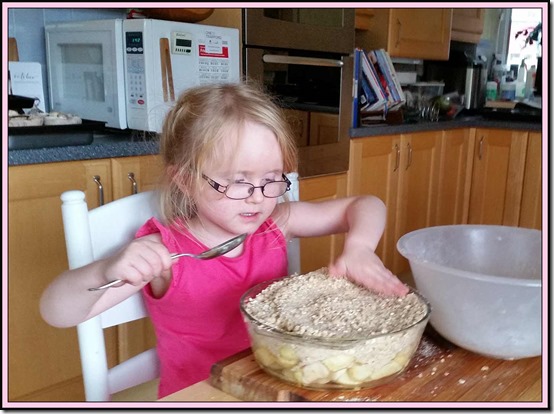 The two ‘perfect angels’ visited us recently whilst their parents got trapped in a room. Unfortunately they managed to escape, so the ‘angels’ had to be returned.

But not before Jessica had constructed a giant and subsequently very tasty crumble from some of the many apples that seem to be flying our way just now. 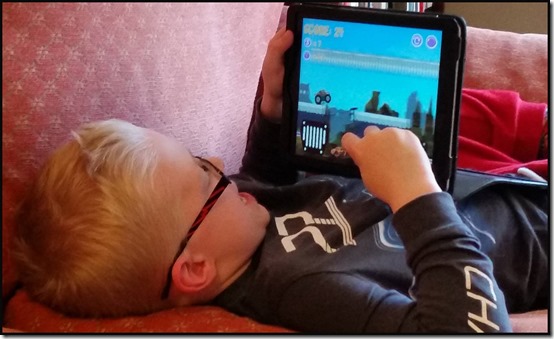 Posted by Phreerunner at 21:17 No comments:

Just for a change, Sue and I pedalled along the towpath to Sale Water Park for today’s parkrun.

Considering it was only their third run, the organisers were pretty efficient and we enjoyed a sedate jog along the scenic course.

It’s not fast, as much of the riverside path is over broken stones and rubble, all part of the water management system that should prevent our houses being flooded following a severe storm in the Peak District.

The ‘there and back’ route runs from the Visitor Centre, beside the river to the end of the Water Park, then alongside the Water Park to a point where it doubles back for 500 metres on a parallel path, before returning along the same route to the start. We met just a handful of the leading runners on their return, before the path divided.

Sue and I, both nursing our injuries, took a shade under 30 minutes. I finished in position 180 out of 257 finishers. The full results are here.

Afterwards we caught up briefly with Andy Wright, who may have adopted this venue as his ‘home’ run, before pedalling on for 15 minutes to spot the last finishers at Wythenshawe parkrun, enjoy a coffee in the Courtyard Café, and help with sorting the finishing tokens for next week. 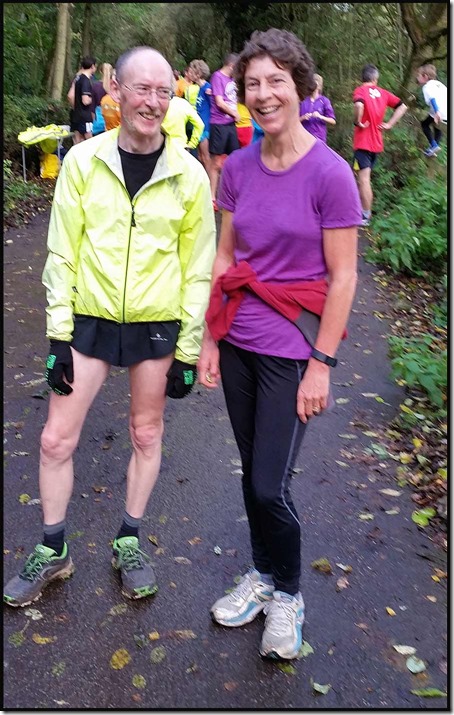 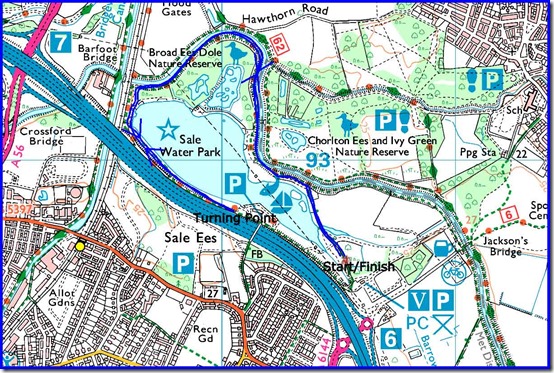 Note that my old mapping hasn’t caught up with the relatively new Metrolink line to the airport that crosses the River Mersey near Jackson’s Bridge. I must upgrade my Anquet maps.

Posted by Phreerunner at 08:02 No comments:

From Our European Tractor Correspondent…

‘It‘s been a while since I‘ve been able to photo a tractor - and this one is not all visible - nevertheless I guess not too difficult to identify.’

Judging by the logo, I would guess that AlanR will come back with something like ‘made in Middlesbrough on a Tuesday afternoon in 1965, painted in the colour of the last trolley bus to pass Ayresome Park before the overhead lines were removed, and exported to Holland shortly before the Teesside Docks closed’.

So how come it finished up in Germany? 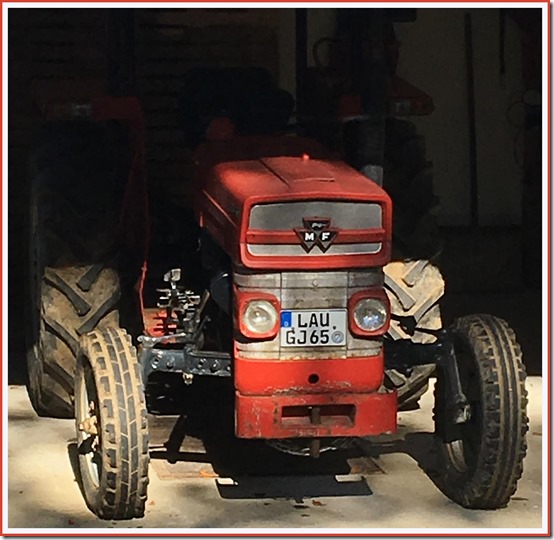 A few days later, Nick was getting into his stride:

‘This time from Austria - the Wachau region on the Danube is known for its wine, but unvisited by us until now. This rather new tractor is used on one of the local vineyards, where we walked yesterday, then drank more than enough local Grüner Veltliner wine!’ 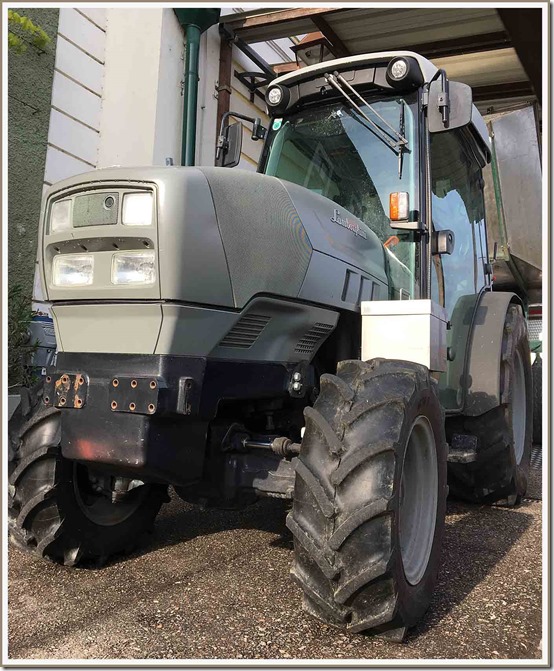 Thanks Nick – you might have made AlanR happy enough to treat us to a coffee tomorrow! 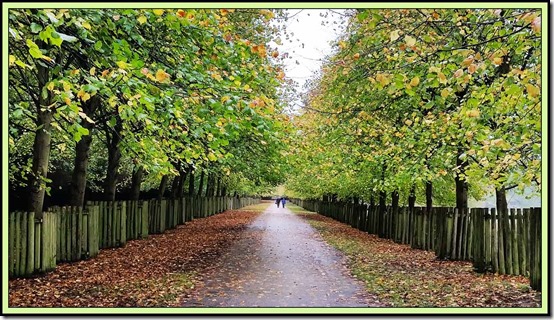 Another Friday, another short walk, this time from Timperley Bridge to Altrincham, via the Swan with Two Nicks and Dunham Massey, on a drizzly morning.

I was on my own after receiving such excuses as:

So after waiting until the designated hour spotting vintage cars on Timperley Bridge, I stumbled off into the gloom.

Well, it wasn’t too gloomy, just a dullish autumn day – here’s the view south west from the bridge; some good sunrises can be seen from here. But not today. 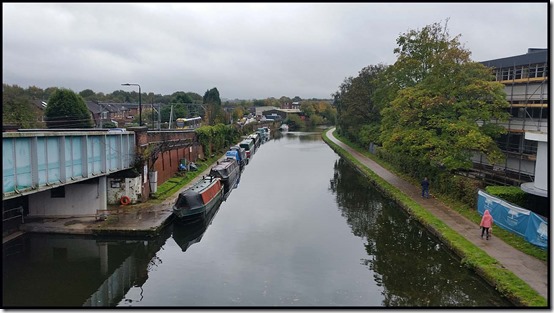 On the way past Altrincham, I paused at Broadheath to take a couple of ‘update’ pictures of the remains of the Linotype buildings. The roofs of new houses can be seen to the right of the scaffolding. 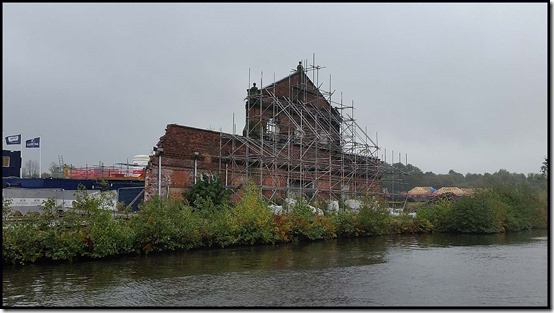 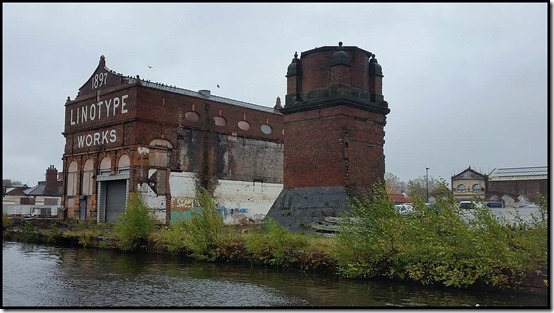 Further on, the Bridgewater Canal exuded an aura of serenity, with the resident mallards taking life very easy in the warm weather. 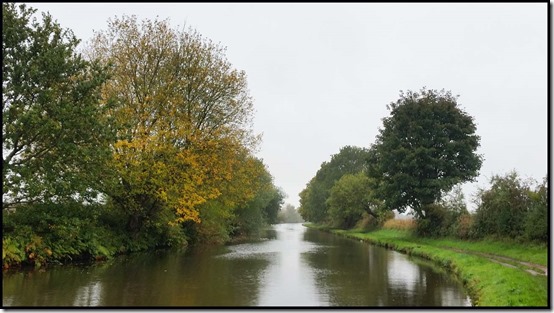 This well trodden route leaves the canal at Little Bollington to pass the Swan with Two Nicks, after which the River Bollin is crossed and the Dunham Massey estate is entered. After a stile, a Grade II listed building constructed around 1616 is passed. It’s a sawmill, and it still operates from time to time. 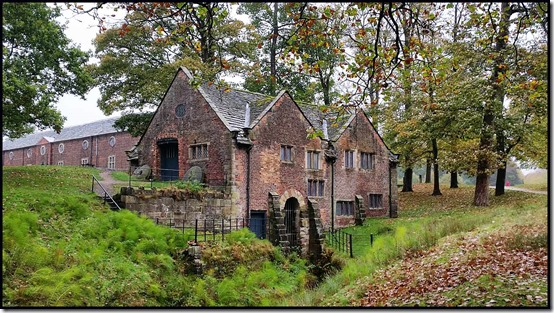 Before crossing the golf course, the path from which leads to the centre of Altrincham via a variety of routes (I commend exploring them for yourself – many are mentioned in these pages under the ‘Altrincham’ or ‘Dunham Massey’ tabs) it’s a 20 metre diversion to visit the excellent Lavender Barn Tea Room. Today their ‘Red Velvet’ cake – involving beetroot -  was absolutely yummy. 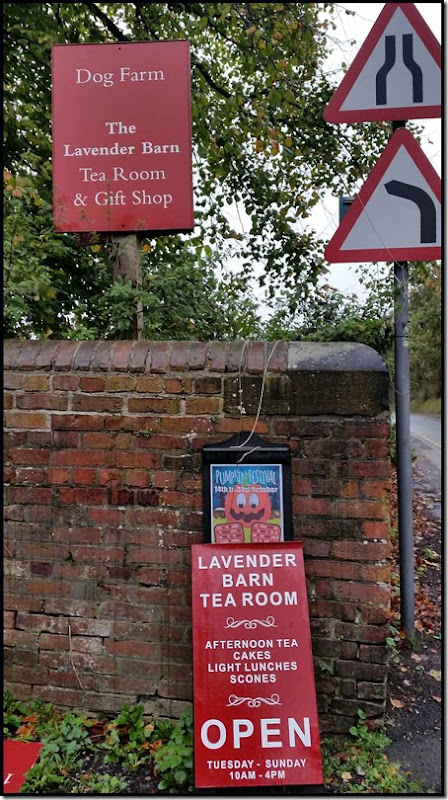 Afternoon tea for two looks fantastic. It’s a shame that it was morning, and I was on my own!