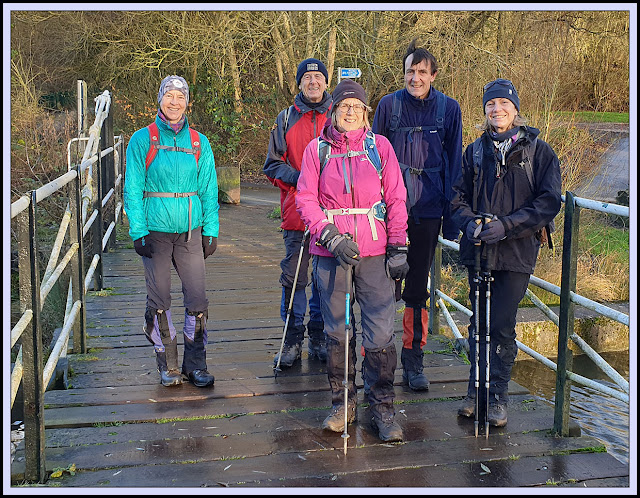 Today's Friday morning walk in sunny intervals saw six of us, Sue, Graeme, Carol, Keith, Jenny and me, setting off on a short circuit of Burtonwood, from the Mucky Mountains Nature Reserve car park. The walk was based on one in Jen Darling's 'More Pub Walks in Cheshire and Wirral' book, but we started from a different point than the one Jen describes - a good move, as you will see later.

This spot is on a favourite bike ride from home via Pennington Flash and continuing down the Sankey Valley to the Trans Pennine Trail and back home. I'm not so familiar with the footpaths though, and after scrutinising the information board (click on the image below to see it better), we crossed Sankey Brook and headed up an incline, away from the bike route. 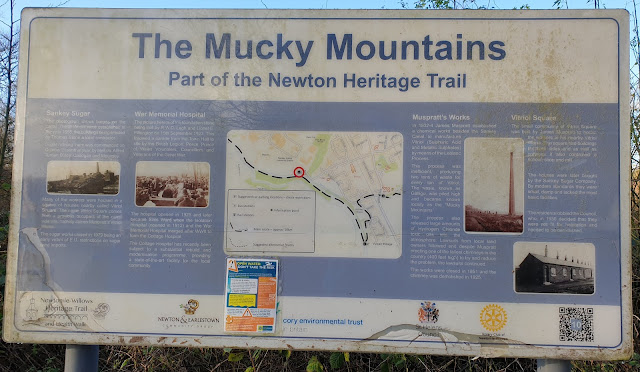 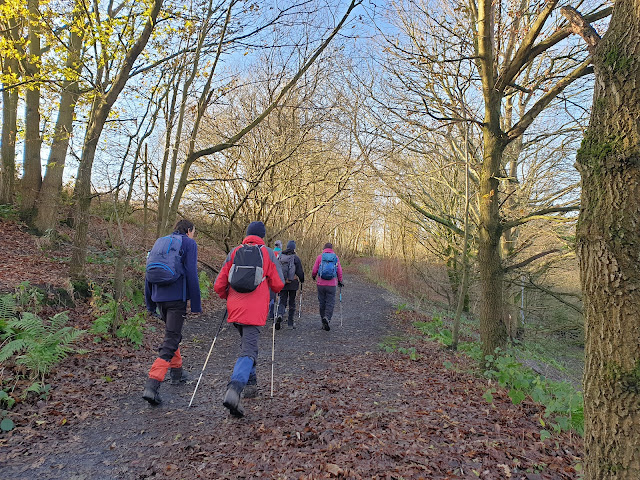 Recent wind and rain has brought the remaining leaves down. This means the birds are easier to observe. A Jay failed to hide from us in the tree below, and in our garden in Timperley I've noticed Goldcrests for the first time. 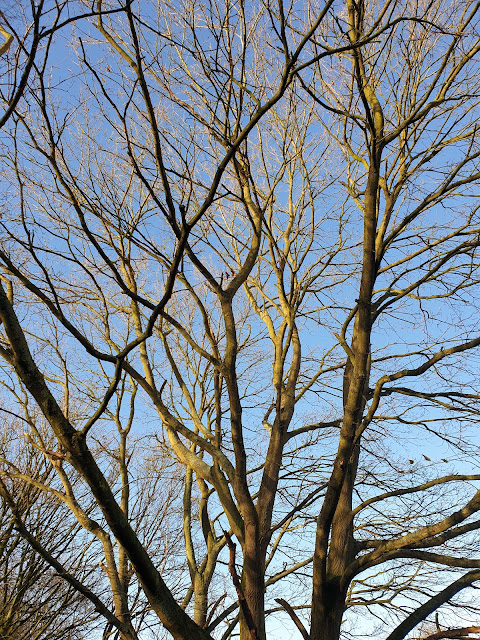 A lane took us past Bradlegh Old Hall. Last time I was here, on 3 November 2017, we walked right past, but today we paused to admire the ancient gatehouse and the moat that surrounds the Old Hall. I wrote more about all this, and other points of interest, in my report on the slightly longer 2017 walk, here. 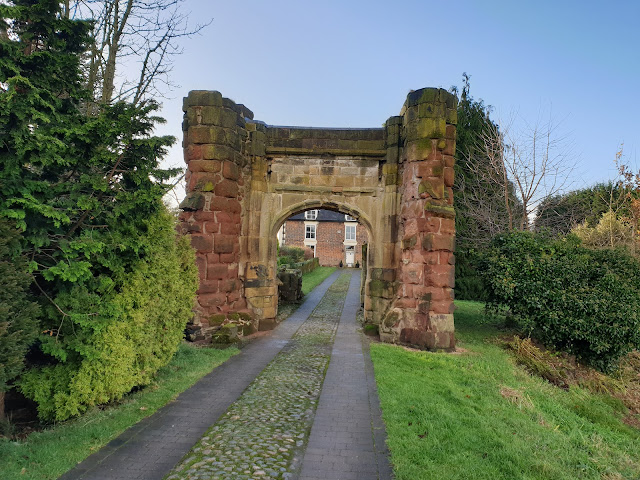 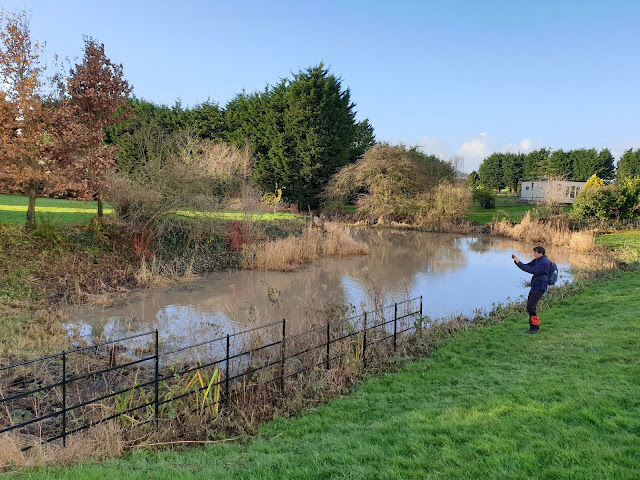 Moving on, a shower appeared imminent.

Some donned waterproofs, but they weren't really needed. All we got was a few drops of rain, as we left Jen's route and took a path to the south of the village. 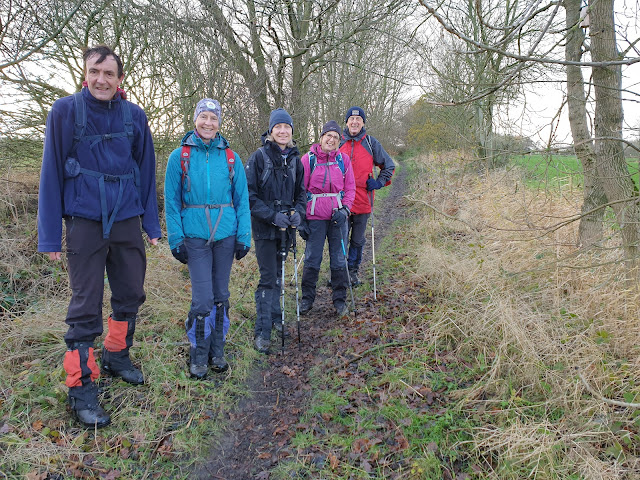 A small circular wood sported a path just inside its perimeter. This provided a spot for elevenses, and a chat (Sue was whispering) with a curious horse.
After skirting the edge of the village, we continued past fields where winter greens seemed to stretch way into the distance. We shouldn't go hungry this winter.... 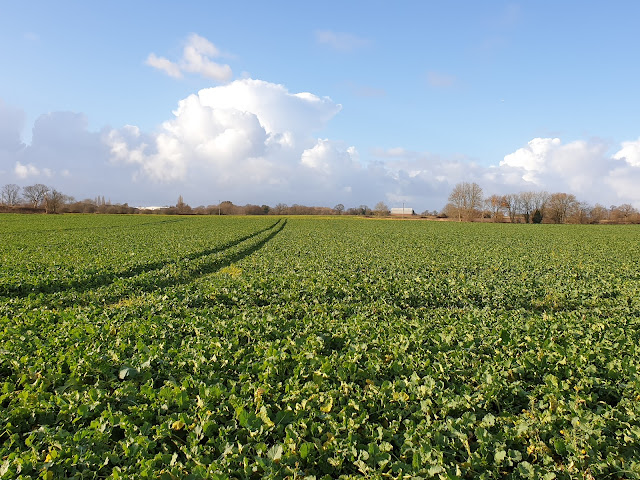 Field paths, thankfully pretty dry despite recent flooding, took us to Jen's start and finish point, the Fiddle i' th' Bag, an old inn whose name refers to a seed fiddle, used by farmers to sow corn. Apparently there's a seed fiddle in the bar, and it's depicted on the pub sign. I do hope that a future picture may show the place in a better light, but currently it's not a suitable starting point and Jen needs to adjust that to a suitable hostelry in Burtonwood village.

A short way down the road towards Winwick, some steep steps led down to a familiar cycleway near Sankey Brook. 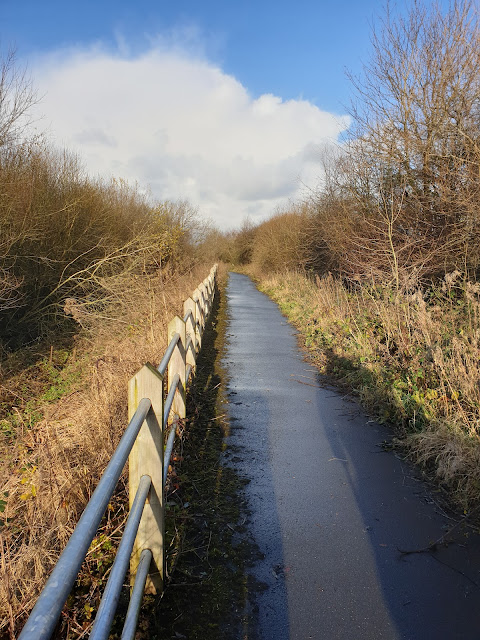 Soon we were next to the remnants of the St Helens Canal, which was opened in 1757, England's first still-water canal, carrying coal from St Helens to Warrington. Now the canal is a series of intermittent ponds, home to Swans, Coots, Mallards and Moorhens, watched by anglers hoping to catch perch, tench, bream or roach. 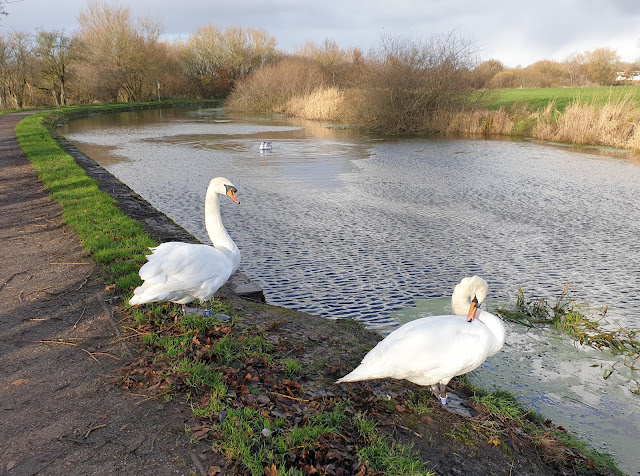 We strolled on, pausing at a good place for lunch, but moving quickly onwards due to mild precipitation at the time. Then the sun came out. 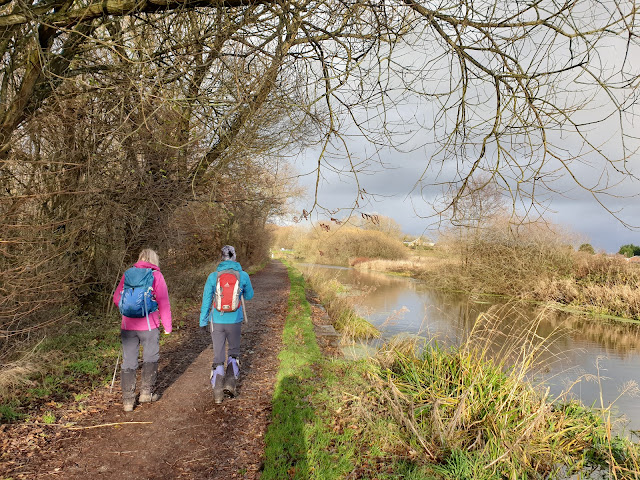 Back at the Mucky Mountains swing bridge, an innovation at the time of construction of the canal, lunch was eventually served for those who had it with them. Others went home. 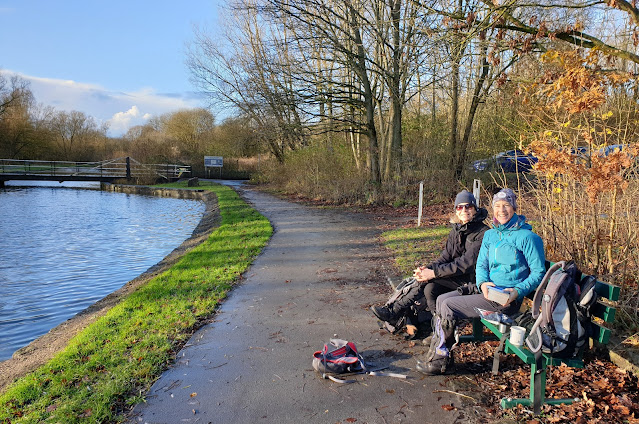 Here's the route - a shade over 9 km that took us a couple of hours. A very pleasant little outing. 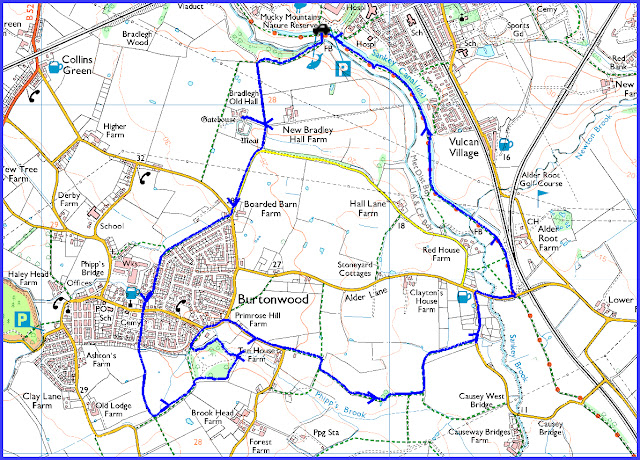 Whilst we plan to go up Shutlingsloe next Friday evening, this was the last Friday morning walk for some time for me and Sue, as we will be borrowing Isabella (1) on Fridays for a while. You'll hear all about that here...
Posted by Phreerunner at 20:32 No comments: 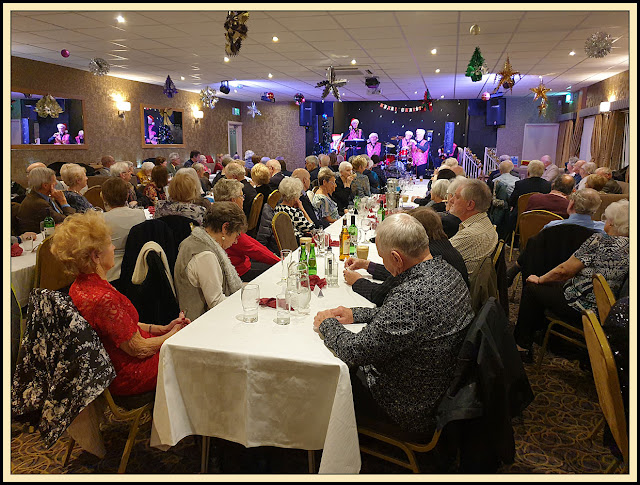 This was unmistakenly a Christmas party, though probably less party-like than last year's fun and games in Downing Street. The Tame Valley Stompers, on whom I've previously reported here and here, and perhaps elsewhere, provided the traditional entertainment. The club (Eagley Jazz Club) is thriving under the stewardship of a committed team of organisers, with over 100 members attending this function at Dunscar Conservative Club near Bolton. A 'bookmark' handout ensured that we could all put the next six months' dates in our diaries.

Here are a few pictures from the night. Our first Christmas party of the season. Reg told me it was his fourth! 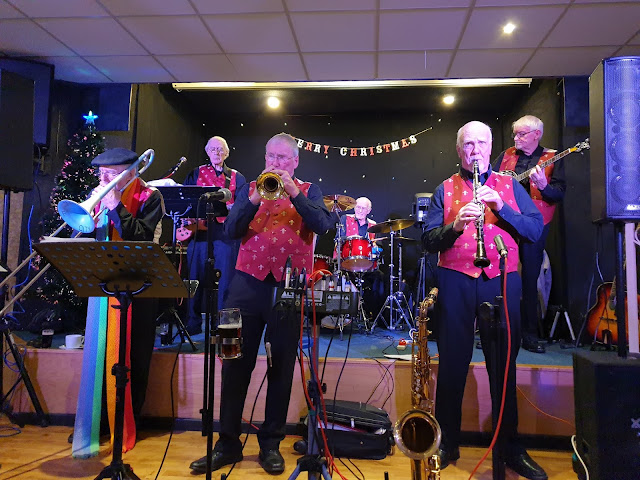 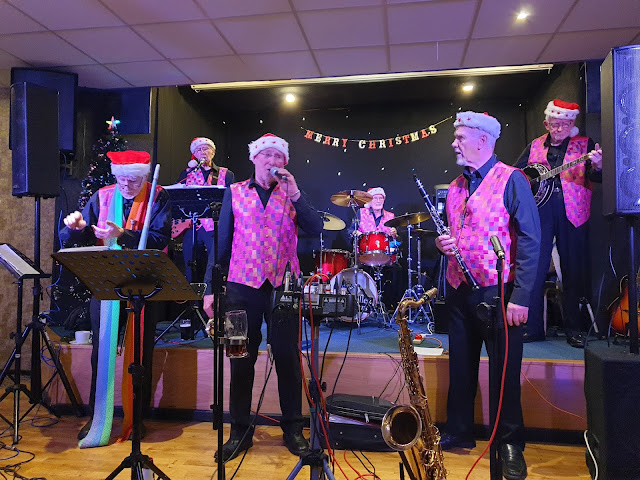 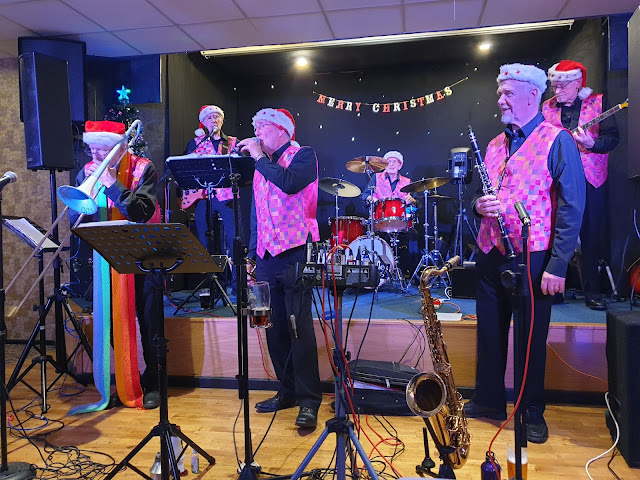 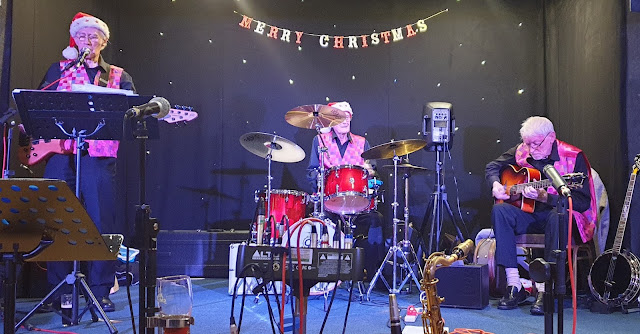 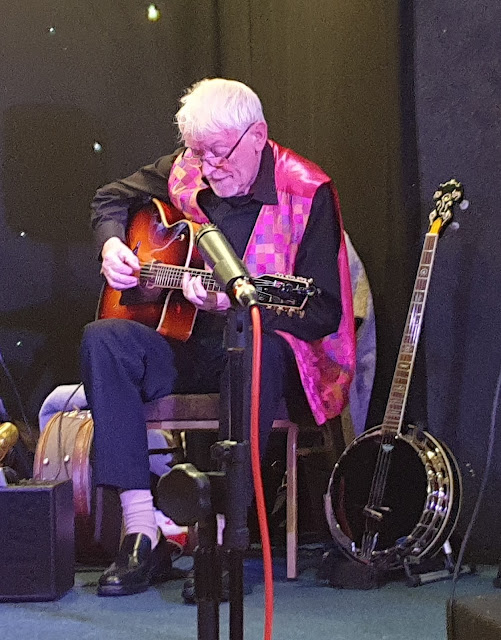 A lovely evening, performed and attended by the 'triple jabbed' more elderly folk who are currently feeling reasonably protected from the Covid virus.
Posted by Phreerunner at 09:00 No comments: 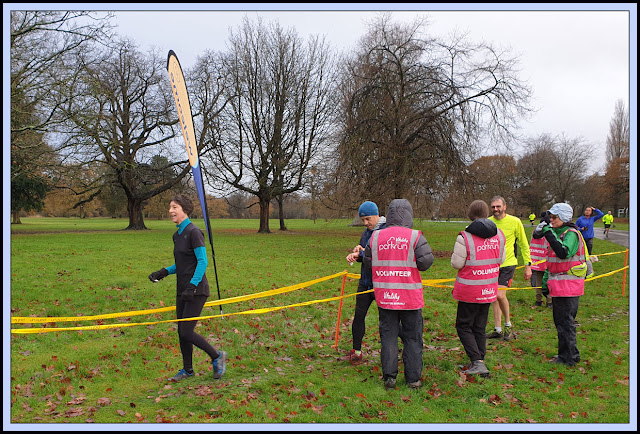 Here are Sue and Alastair, closely followed by Mark, at the finish. Assuming that I took the picture, that can only mean one thing: I finished ahead of them; I'm on the road to recovery from Plantar fasciitis.

My foot is still sore, but short runs like this one on soft ground don't seem to bother it.

Posted by Phreerunner at 07:55 No comments: