Sue kindly transported us to the start of this little parambulatory interlude, but sadly was unable to join us due to a shoulder problem.

Mick and Gayle were, as usual, accompanied by rain clouds, but as we travelled west we slowly managed to shake them off.

By the time we reached this excellent campsite (the disco is fairly distant) the sun was beaming down, and later, as I write this, a 3/4 moon is rising in full view of the tent door.

The day's undulating route took us through lovely countryside not usually frequented by hillwalkers. We saw nobody else out walking today.

It has been raining in recent days. The evidence of that is everywhere, and soon I had wet feet due to leaky boots and failing Sealskinz socks. Mick and Gayle were both better equipped, and had dry feet and much lighter loads. However, they did enjoy helping lighten my load of fudge brownies!

Buzzards mewed at us throughout the day, and David Davies (1818 - 1890) beamed at us from the other side of the River Severn (pictured above) as we enjoyed a break on a bench near the pretty village of Llandinam. It was all very rural. The shop and pub were both shut so our yearnings for beers and ice creams were just that - yearnings.

The Eagles are now serenading us from the disco (quite pleasant really!).

As we planned our final section of the day's walk (eventually the plan was foiled by a cow that had just given birth on our path) a Springer Spaniel, well, sprang upon us. Perhaps it smelled the chocolate. Anyway it jumped onto Mick's lap just as if it were a hearth rug!

Dinner was very civilised, as we ate around a big table in the camp kitchen. Whilst Gayle produced an eloquent report on the day's activities, I went searching for a can opener (tuna and rice is a bit boring if you can't get at the tuna), then we hunted in vain for part of my spectacles that seem to have vanished. Why do I keep losing such things - last time it was one of the handles of my billie can?

Anyway, it has been a lovely day, but after 27 km with 800 metres of ascent and a 16 kg pack it's now time to allow the lullaby of the disco to induce unconsciousness for a few hours. That should be pretty simple in the old Phoenix Phreerunner tent on this fancy new NeoAir bed gadgety thing.

We have an early start tomorrow...

Sent using BlackBerry® from Orange (Next posting) (Back to Index)

Posted by Phreerunner at 22:36 No comments: 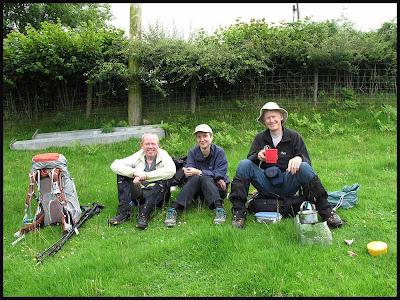 Above: Self-timed photo taken with the Canon G10

Below: Blogged images taken with the Blackberry Curve 8320 'phone 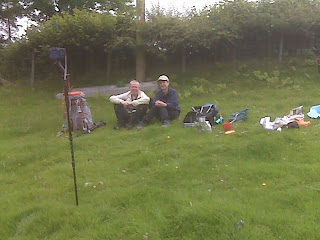 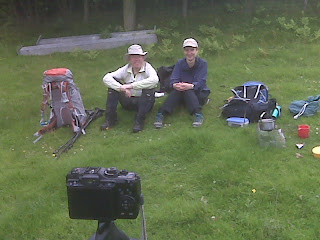 An Across Wales Walk 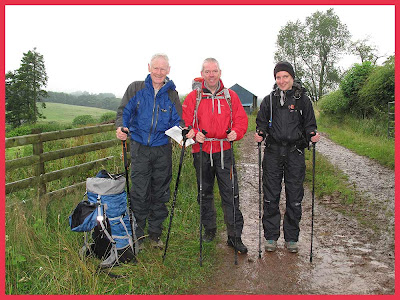 Mick, Gayle and Martin stand in the rain at Anchor Bridge, wondering whose daft idea this was. 9am this morning - seemingly just before dawn!

Sent using BlackBerry® from Orange (Next posting) (Back to Index)
Posted by Phreerunner at 12:18 2 comments:

A Short Walk with Sophie 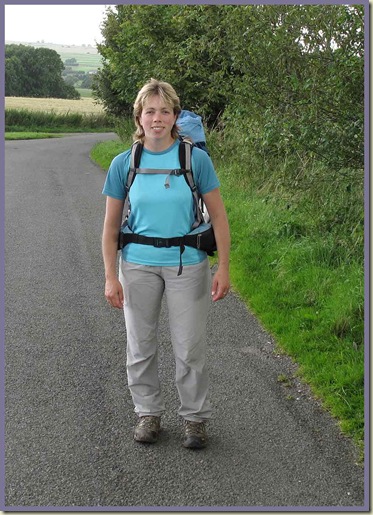 It was a short walk for me, as I joined Sophie Easterbrook today for about four miles, from Taddington to Sparklow on a not unpleasant Peak District morning, for this very small section of her very long walk.

Sophie is nearly two thirds of the way through a walk from John O'Groats to Land's End - she's probably gone around 700 miles, all bar the last two days accompanied by her faithful Jack Russell, Patch.

She's doing well, walking comfortably and strongly, a bit faster than Naismith's pace, currently aiming for 20 to 30 mile days, and using camp sites unless she gets a better offer.  Unsurprisingly, she's missing Patch.

Sophie is excellent company and at the top of her game; she has some IT issues with her otherwise excellent blogging equipment, and is reporting on her progress every few days here.

She's walking in support of the Dogs Trust charity and has a donation page here.

I'm sure she would be delighted to see any readers with the ability to track her down over the next 3 or 4 weeks as she speeds along through the green and pleasant countryside towards Land's End.

Well done, Sophie.  It was a pleasure to meet you. 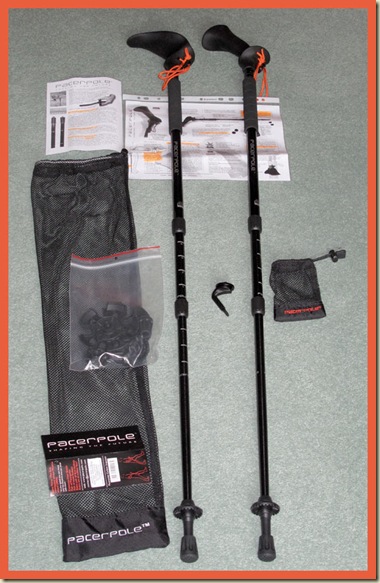 Not even the plumeting dogs that tried to wipe off the address label prevented these from arriving this morning.

Sadly, at present a helmet is needed in order to test them.  Hopefully the weekend weather will be better. 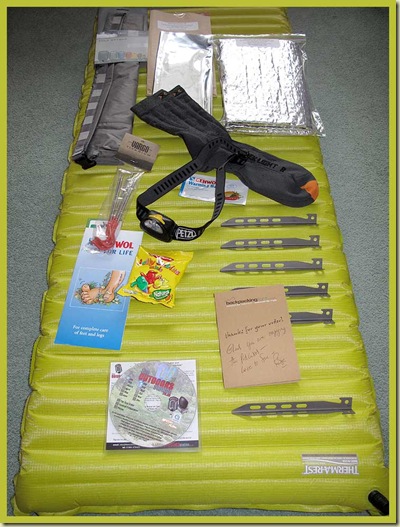 Ordered yesterday, this Shiny New Gear arrived today, efficiently as ever, from Bob and Rose at backpackinglight.co.uk.

My old X Socks wore out last week; I left my torch under a pillow in Italy (this one is heavier but better); the Phreerunner's pegs are twisted and mangled (these are better, if heavier); the dry bag is a replacement as they don't last for ever despite liberal application of duct tape; the pot cosy and windshield material will be there when needed to replace the existing gear, which is on its last legs; and the 260 gm NeoAir mattress is an experiment - heavier than my Multimat, but more compact - ok for trips where weight isn't really an issue - for instance this coming weekend. 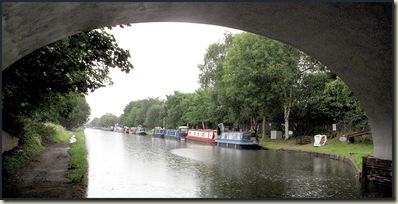 Our only exercise of the weekend comprised a short stroll in Sunday afternoon rain along the Bridgewater Canal, as far as Marsland Bridge, from the security of which the above photo towards Sale was taken.  Barges line the far side of the canal all the way to Sale and beyond.

It was weather fit for ducks, who thought we had brought their  dinner with us. 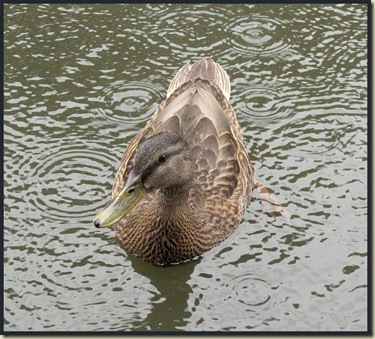 Meanwhile, our local heron was busy searching for, and catching, his own dinner. "Take Deep Breaths" exclaimed the hotel receptionist, as Kate faltered on the brink, in the lobby of Hey Green Hotel, in Marsden.

She got through that difficult moment, from when everything, so far as I am aware, went smoothly thanks to Kate's meticulous preparation, though she was a little surprised when her mum made a short, unexpected (by Kate) and eloquent contribution amongst the speeches.

What with family visits, recovery time and other distractions, the wedding activity seems to have absorbed the whole weekend.  No bad thing, I suppose, especially as yesterday was a little damp outside.

Thousands of pictures were probably taken.  Here's a small selection for which Sue is responsible.  (I was in no state to hold a camera.)

After the ceremony - the new Mr and Mrs Milnes signed the book. 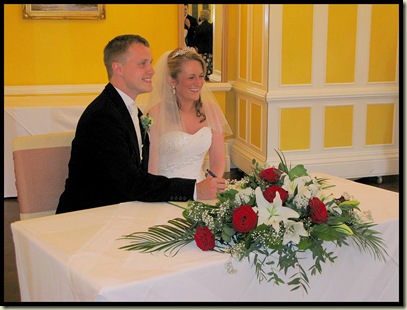 Then it was out into the garden, where the sun had wisely sent the rain packing for the afternoon. 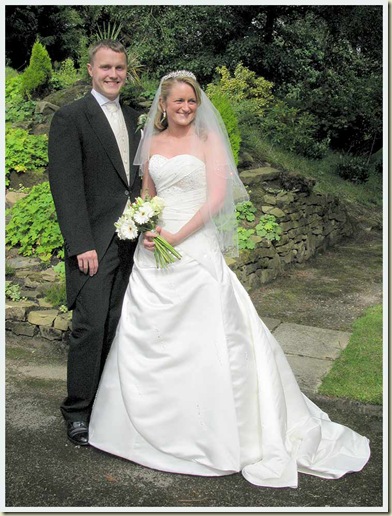 The happy couple posed with everyone, including the Flower Girls and other younger elements of the party. 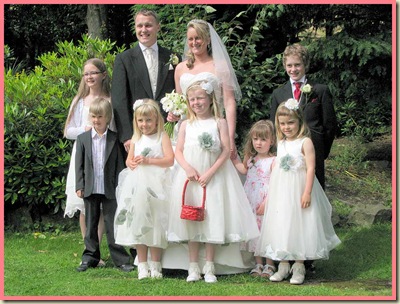 The Chief Usher (Tommy, on the right), kept his assistant (Mike, on Kate's right) under close supervision at all times. 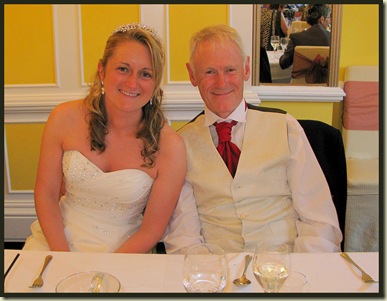 The cakes were cut, and eaten.  [More about them in future postings, following requests for the recipes.] 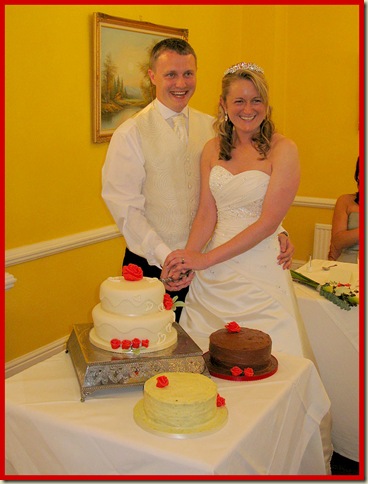 Bernard, Kate's new father-in-law, presented her with the obligatory team shirt.  All Milnes's are very competitive, and this newcomer will fit in very well with that trait. 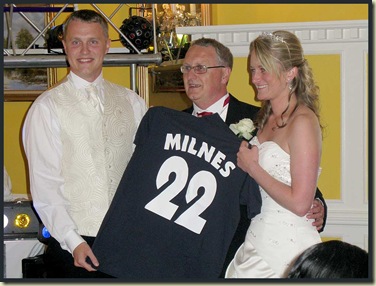 Thanks to Sue for taking the photos, and even managing to get one of us. (Obviously, Kate has lots more photos - those on this posting are just a 'taster'!) 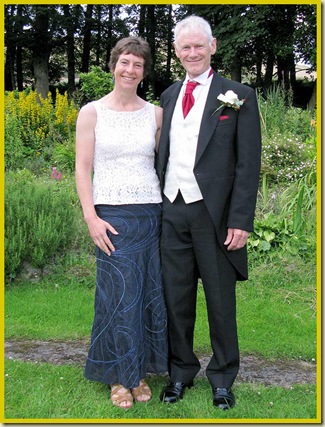