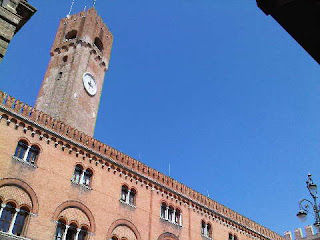 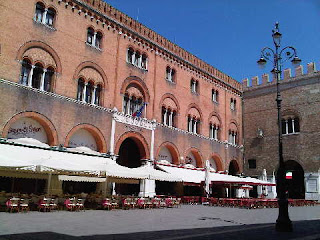 We enjoyed a short, sunny, sedate journey, then booked into the Continental Hotel (where we have a comfortable air-conditioned room, albeit with a worrying footprint on the ceiling!), took precautions against the battered Clio being towed away, and strolled around Treviso with ice creams in hand.

The main piazza is too big for this gadget's flimsy little lens, hence the two images.

We are told that it's much cooler than of late around here - a mere 29C or so. We are glad that Chalet Angelo was up at 1700 metres - it was hot enough up there!

Treviso has an ancient centre, surrounded by walls, gates and a moat. The moat is a mixture of clear watered rivers and canals, with a profusion of different birds on weed control fatigues.

The Duomo (Cathedral) is large and almost completely lacking in ceiling decoration, unlike many other churches we've visited. But it was nice and cool and had a reverent atmosphere.

The evening was spent in the excellent company of Gillian and Nick, with Toni del Spin providing superb Trevisan cuisine, thus bringing this trip to a most pleasurable conclusion.

Sent using BlackBerry® from Orange
Posted by Phreerunner at 21:49 No comments:

Our Last Day in the Dolomites 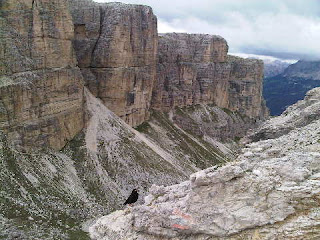 Whilst Sue enjoyed a flower bagging foray from Chalet Angelo onto the Pralongia plateau, I enjoyed my final day here with Dan from Collett's and eight other guests, on the standard traverse of Sassongher.

Our numbers had been boosted by the cancellation of today's Via Ferrata plans due to early rain. Setting off in waterproofs cured that problem. They were soon discarded in favour of t-shirts, though later fleeces were deployed for the first time since we arrived in Italy three weeks ago.

Edelweiss and Ruby, a red deer, accompanied us to Col Pradat, from where we took the pleasant route through low shrubs to the junction where #7 heads across the face of the mountain. It's actually quite a wide terrace compared to #7 up Monte Cavallo; nobody encountered any difficulty, other than Alfred, the Alpine Salamander, whose black body was badly camouflaged by the white rock, requiring him to hide in a crevice.

We reached the 2665 metre summit in around three hours after our 1100 metre ascent, losing only Mark (to a bout of vertigo) on the way. A cold breeze scoured the top, where a coach load of day trippers had bagged most of the sheltered spots. I tried to capture the moment (see previous posting), with limited success. My subjects obviously didn't realise that the photo would immediately be disclosed to Eddie and the world.

Some of us lunched on the summit, with excellent views despite a cloud base of around 3000 metres. The air was much clearer than of late.

The rest lunched near the col, below a short wired section that caused no significant difficulty. The most photogenic diner was the gentleman pictured above, Charlie Chough, taken from our lunch spot with our ongoing route down appearing just below the crags in the distance.

'Just around the corner' beyond those crags lies the shyly positioned Rifugio Gherdenacia, which looked closed when it eventually came into view.

Dan narrowly avoided a mutiny. The Rifugio was open. Drinks all round.

Path 11A then zigzagged the merry band down a steep gully before depositing them on lovely woodland and meadowy paths past Melancholy Thistle and Clove-scented Broomrape.

Further down, on the road to Verda, a resident had clearly made a poor calculation when exercising his road crossing skills. Adolph, the ex-adder, made such an impression on Dan that he produced his lunch box, muttering something like "I think Alice would like this".
[Alice is the host/chef at Chalet Angelo.]

The riverside path led us gently on to Chalet Bracun, where the others collapsed into heaps resembling the piles of washing in Angelo's laundry, whilst Stuart and I strolled back up the 150 metre slope to Angelo's waiting sauna.

Another lovely day out (16km, 1300 metres ascent, 8 hours) was followed by a sociable evening with only a short diversion for our self-catered dinner, comprising scraps. 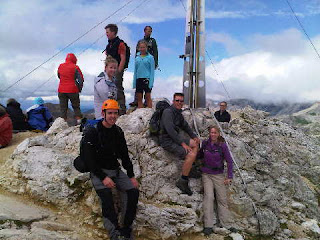 Sent using BlackBerry® from Orange
Posted by Phreerunner at 11:31 No comments: