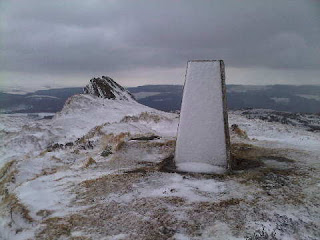 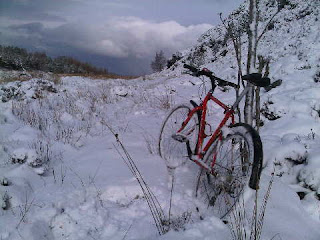 I set off from Dunkeld on a cloudy morning after overnight snow. All went well at first. Pleasant tracks took me up to Mill Dam. But after that, the high road to Loch Ordie (pictured-bottom) presented a minor challenge. The surface of mud, covered by several inches of fresh wet snow, was to blame.

Loss of traction resulted in the sort of 'balling-up' normally experienced with crampons. The mudguards balled up frequently, resulting in very slow progress - riding, pushing and carrying the bike - to the path that leads to Lochan na Beinne and Deuchary Hill. Abandoning the bike for an hour or so, I set off up the hill, immediately regretting having forgotten my snow shoes!

The summit of Deuchary Hill (pictured-top) would be a pleasant spot on a summer's day, but today's icy easterly made for just a few quick snaps and an appreciative glance at the views, before hastening down to a sheltered spot for a cuppa, where I'd seen red deer scrabbling in the snow (they are very literate!) and buzzards mewing overhead.

Back at the bike after my 4km hike, with fresh energy for the pedals, it didn't take long to reach Lochordie Lodge. Balling-up was no longer a problem after this, but the scenic track around Loch Ordie made for challenging riding due to deep pools of water and wide tracts of deep mud. It was hard at times to maintain momentum. Life became much easier after another cuppa, with aerial crisps (they blew away) by the bridge at the north end of the loch. Deuchary Hill looked far more distant than it actually was (2.5km).

Good tracks now led past Raor Lodge and towards Mill Dam, before which I took the south westerly Atholl Forest track, turning NW then south for a final lovely fast and rough descent back to the Hilton in Dunkeld.

Next: A Plod With Reg - you can't beat one of those! The bike will stay at home. 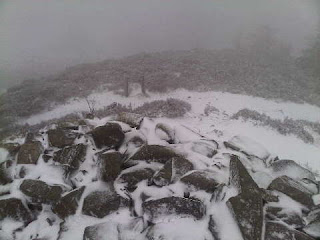 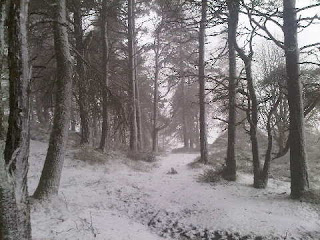 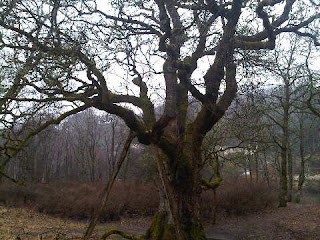 Today's 'Plan A' comprised a cycle ride up Glen Tromie and a trudge up to the 769 metre summit of Meallach Mhor and back, with a visit en route to Sue and Neil in Newtonmore.

Waking to a blizzard in Dunkeld, this plan was rejected in favour of a circuit from 'home' taking in the 404 metre summit of Birnam Hill.

Rain and snow continued on and off all morning - basically, rain below 100 metres, snow above that height. It was a lovely walk despite the conditions. I enjoyed strolling above the river past Birnam Quarry and then gradually ascending, before pausing for a cuppa and some views at Stair Bridge.

There's a massive cairn on top of the hill at King's Seat, pictured top. Visibility was limited, if rather far from the white-out conditions recently experienced by Sue O - "Big John and I wrestled our way up Harvey's first Corbett (Carn an Fhreiceadain) on Saturday with aforementioned dog plus Moll - we had to get the GPS out to find the top - we were about 3 feet from it! That's how good the white-out was."

A little lower down, on the direct descent to the north, the woodland was very pretty in the fresh snow (middle picture). But, you may observe, I could be anywhere, so the bottom picture is of the ancient Birnam Oak, thought to have been an inspiration to Shakespeare in the composition of Macbeth, after he visited the area in 1589 as a strolling player. Hopefully that's proof of my whereabouts, though I doubt anyone cares!

Anyway, I was back down in time for lunch in Palmerston's, before ambling back to the Hilton, from where this excellent 15km stroll takes around 4 hours.

This afternoon, it's snowing in Dunkeld...

Sent using BlackBerry® from Orange
Posted by Phreerunner at 15:01 5 comments: 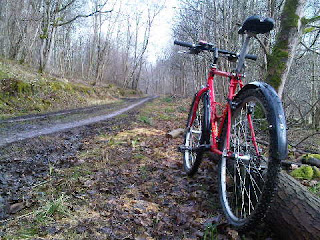 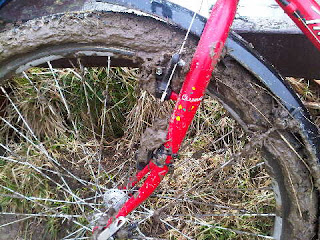 I've been using fairly close fitting mudguards on my mountain bike ever since I bought it in 1990. I've been on some muddy tracks, some very muddy tracks indeed, on numerous occasions without too many problems.

Today I set off from Helmsley up Rical Dale's pleasant (and deserted) forest tracks (top image). They led eventually to Newgate Bank, from where the descent into Rye Dale was fun but muddy, so I played safe for the next section (I wanted to stay reasonably clean before a long journey) and took to the road to reach the top of Murton Bank.

Beyond Murton Grange an enticing bridleway saw me off road again, enjoying a slightly technical section down to Murton Wood. My troubles began here. A steep push through glutinous mud brought me to a bench, and a most welcome tea break. By now my wheels (bottom image) were moderately clogged with mud but the bike was just about pushable on the rare occasions when I could get my old trail shoes to provide traction up the steep, narrow path.

At the top of the hill I was relieved to see the ongoing grassy path head through some fields. That was before I realised that this 'grassy path' comprised a layer of straw covering an inch of gloopy clay.

The bike, with its now thoroughly seized up wheels, had to be carried, albeit the terrain was flat. It was very heavy. This was one of those occasions when one pauses for thought, the dominant emotion being 'it can only get better'.

And it did. I reached the tarmac of High Leir Lane and persuaded the wheels to rotate slowly in the direction of Old Byland, a pretty little hamlet. The mud mostly stayed attached to the bike. Attempts to remove it with sticks only resulted in pieces of broken stick being incorporated into the cement. Fingers worked better, but the icy wind decided to deliver some snow, which made this method of mud removal a tad unpleasant, especially when it came to putting my gloves back on.

So I proceeded through Old Byland and down the hill towards Rievaulx. The faster I went, the more complete became my covering of small flecks of mud. Light rain aided congealment...

Then, at Ashberry Farm, my luck changed. A tributary of the River Rye offered a good 'dunking point' where total immersion helped to remove some of the mud. A stronger current would have done a better job, but at least the remaining mud is so well attached to the bike that not a lot was transferred to the car on my return to Helmsley.

After managing about 40 miles in four hours on the previous couple of Sundays, today's hillier, rougher and muddier conditions saw me limited to little more than 20 miles in the four hours I was out, despite a fast descent to Helmsley.

Posted by Phreerunner at 22:22 No comments: