Run to the Sun 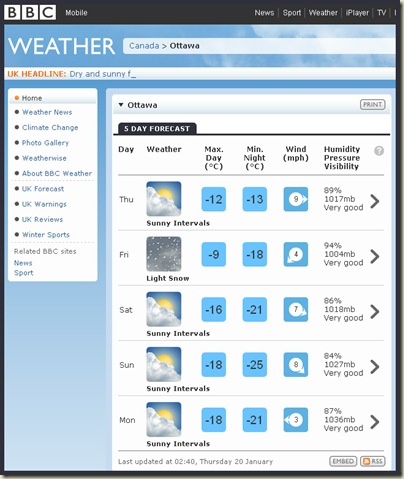 Somehow I don’t think I’ll be wearing that Polartec® fleece outdoors very much!

This excellent website provides a pictorial flavour of conditions ‘on the ground’, so to speak. 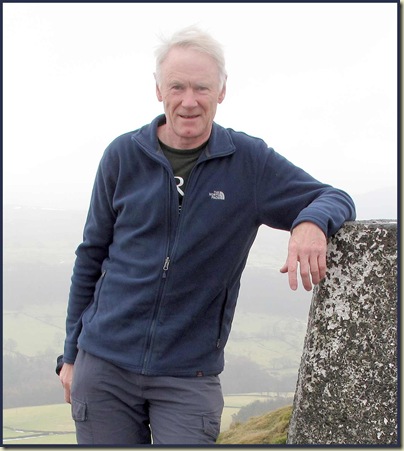 Webtogs recently sent me this item, for review by the end of the month.  After wearing it virtually constantly for a fortnight, here are my first impressions:

The manufacturer’s product details and specification is provided at the foot of this posting. I do not take issue with them.

This is a standard Polartec® 100 fleece top, currently retailing at £49.00, less 10% from retailers such as Webtogs.  Many readers will be familiar with the quick drying Polartec® 100 polyester fabric used in many lightweight fleeces.  This particular item, manufactured in the Philippines, is made to a very high standard
Fit:
Features:
Weight:
Practical Use:
Alternatives:
Conclusion:
That’s it for now.  I’ll add to this review when I have been using the fleece for a longer term.

See foot of this posting for more.

The North Face’s own product details and specification are reiterated below. 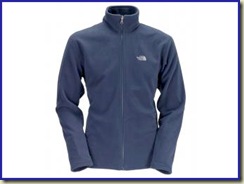 Product Details and Specification:
Engineered for optimum thermal efficiency, the Polartec® fleece makes the Men’s 100 Full Zip a hiking essential. It’s a lightweight, warm and breathable fleece, able to retain crucial body heat in the cold while letting moisture escape through its lofted fibres. There’s durability too, making the fleece resistant to pilling, fading and shape distortion, plus soft-to-touch comfort courtesy of the brushed face. Pockets provide space to warm chilly hands or stow belongings, and a full-length zip runs up to the high neck for comprehensive insulation. Quick to dry, a cinch to care for and zip-in compatible with other layers from The North Face®, this will quickly become an essential part of your packing for outdoor adventures.

Note: Whilst the gear was provided by Webtogs, this review, over which I have total editorial control, is totally independent of that on-line retailer.

Further observations:
1.  [23/1/11]  James Boulter has reviewed the equivalent NF smock (or 'pullover') here.  Note that his NF fleece has no chest pocket, unlike its Rab equivalent.

2.  [14/2/11]  I've continued to wear my full zip fleece top for a number of day walks, and whereas the side pockets aren't easily accessible when wearing a rucksack, it's good to be able to unzip the 'Full Zip' to keep cooler on ascents, now the weather is warming up.  So - chest pocket vs full zip?  I suppose I'm easily pleased - happy with either.

3. [10/3/11]  After another month of fairly constant use, both in and out of doors, mainly over an Icebreaker 200 Men's Oasis Crewe (long-sleeved shirt), and several washes, the garment remains 'as new'.  It continues to be a delight to wear, and soon recovers from any condensation that forms inside waterproofs on wet days.  By my normal standards it looks quite smart as well! 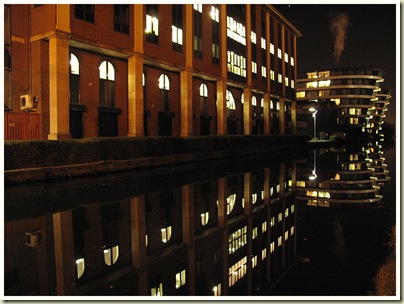 At last.  Sue and I got around to planning some trips for this year.

You can view them here, and by all means contact us if you’d like to come along.  We’ll be on lots more as well, organised by others.

You are of course welcome to just turn up for the evening walks, and slide shows, the next one being from the Midland Hotel, Marple Bridge, 7.30pm on Wednesday 16 February.

Tonight, due to the provision of insufficient notice, it was just the two of us on a beautiful moonlit evening.  The familiar route made for no navigational difficulties as we took the Bridgewater Canal towpath through Altrincham to Little Bollington and the warmth of The Swan with Two Nicks.

The canal was flat calm, hence the reflection (above) as we passed through Altrincham.  But there was a cold bite to the air.

Leaving the pub and entering the grounds of Dunham Massey, we felt the cold air that had descended in clouds of vapour to the lowest point of our walk.  We hastened on along this 11km route, chasing our own shadows in the moonlight, across the golf course, eventually joining the A56 near St Margarets.  9.30pm and the town centre was deserted.  A smattering of folk joined us on the short tram ride back home, a thin sheen of frost now covering everything.

A pot of tea and a hot bath brought the evening to a most satisfying conclusion.

“Anyone up for a walk on 16th?” came the message from Heather, a couple of weeks ago.

Sue and I were up for a walk, despite a pretty dire weather forecast.  We’d have liked to go high, but post New Year Lassitude, not to mention the forecast, dictated a lower approach.

So it was that after some notable apologies Heather, Stu, Sue, JJ, Rick, Martin, Sue, Gayle and Mick, together with the canine trio of Trudy, Suzy and Molly, assembled for a leisurely coffee at Leighton Moss RSPB Centre.

Amazingly, it wasn’t raining, but we didn’t take any photos because “the weather will improve” someone quoted from a dodgy source – “BBC or MWIS?”

“Both” came the reply.

They were both wrong.  It started to drizzle.  The drizzle thickened.  Waterproofs were donned by the non-Paramo contingent.  Steady rain had been falling for a while before the cameras were finally brought out by the attractions of Gait Barrows (aspiring botanists should click that link), reached via Leighton Moss and a minor misplacement due to my poor navigation in Cringlebarrow Wood.  (“I’ve never been here before” observed Sue O, the ‘local’.)

First a group photo, sort of. 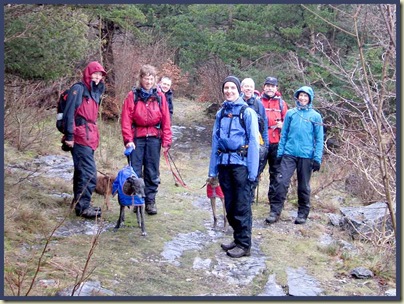 Next a snap of Gait Barrow’s most impressive and extensive limestone pavement. 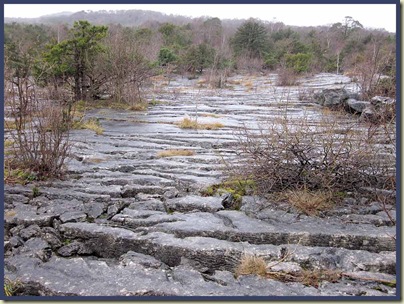 Then a poseur.  Beside a large cairn declaring ‘Gait Barrows – National Nature Reserve – declared in commemoration of the Silver Jubilee of QE2 – 1952-1977’. 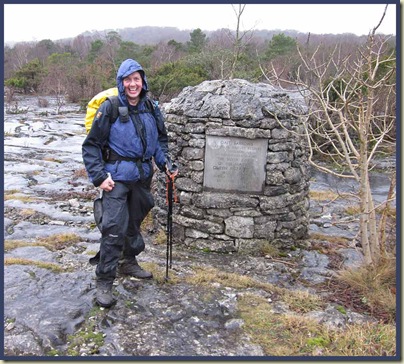 “The rain isn’t nearly as bad as yesterday” observed Sue O, who wanders these parts daily.

On exiting the Barrows a slightly more serious misplacement saw us walking up and down the road to Coldwell Farm, dodging a ‘boy racer’, and returning eventually to the relative safety of a footpath beside Leighton Beck, near Leighton House. 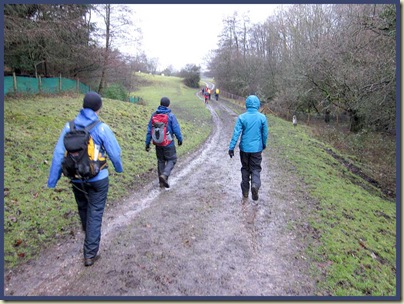 Our planned route being under water (did I mention, there’s been a bit of rain around here) we were tempted by a new footbridge over the beck.  That was fine, but soon afterwards my chosen route came to a dead end against a fence in a marsh; clearly not a path.  Here, Heather took over and led us over a broken wall, onto the track to Hazelslack.

Then I was in charge of route-finding again and we were soon confronted by some scary cows.  (Actually, I thought they were remarkably docile.)  With three dogs in our party, we skirted around the beasts.  The path turned out to be the wrong one, as tactfully pointed out by Gayle, who by now had realised that navigation in this area is not my forté, and yet another retracing exercise was undertaken, faffter which I concluded that our circumperambulation of the cows had been completely unnecessary.

A straight route through boggy fields led inexorably to Arnside, where we stumbled along a bit of tarmac before pausing at a cul de sac from which I’d hoped to find a path up Arnside Knott.  Sue O and Stu’s patience had been exhausted though, and they strode on up the lane from which I knew there was an easy route up the Knott.  The rest of us reluctantly followed them, uneventfully ascended into a cool breeze, retreated from that, and settled down for a hard earned lunch.  It was after all 1.30pm, and we’d been on the go since shortly after 10am. 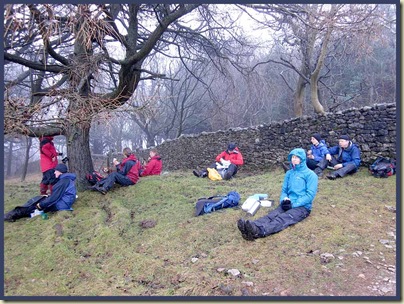 We admired the view, such as it was.  You can just see the splendid railway viaduct. 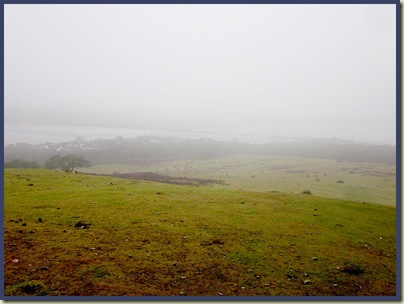 Since returning home, I’ve noticed that Gayle and Mick have revisited this spot.  Here’s today’s view.  And here’s one I took earlier.

Anyway, we carried on in the mist to bag the HuMP known as Arnside Knott. 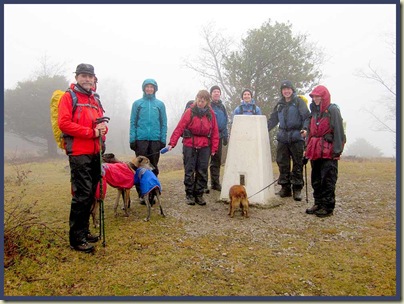 The dogs got cold, so we rushed off down to Far Arnside, and in what seemed like just a jiffy we plunged into some deep Morecambe Bay mud.

“This is not a beach” observed Stu, “it’s quicksand”. 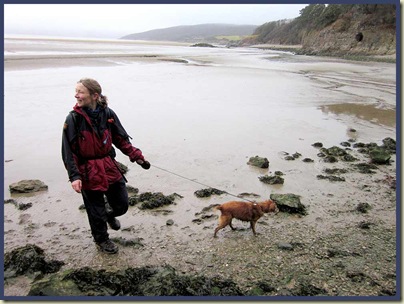 In fact we nearly all retreated, leaving Sue B and Mick to brave the quicksand route to Silverdale, whilst the rest of us trudged over grassy fields with views down to the mud flats below. 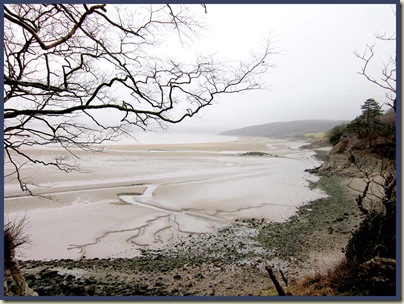 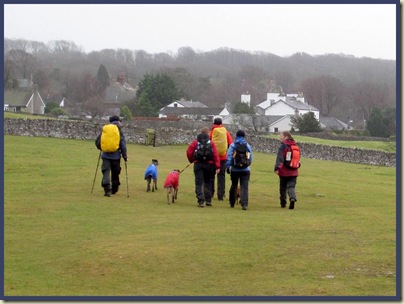 Reunited with the survivors of the beach diversion, we toured the ginnels of Silverdale, passing this house, which if my memory serves me once looked quite smart. 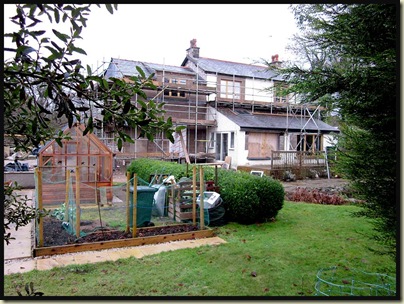 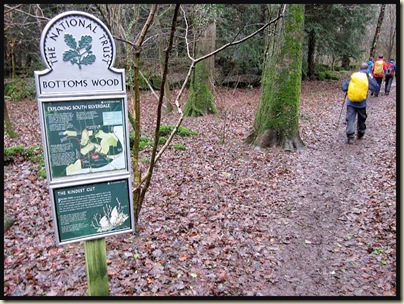 …led to Woodwell, once Silverdale’s main water supply, and a drovers’ watering spot. 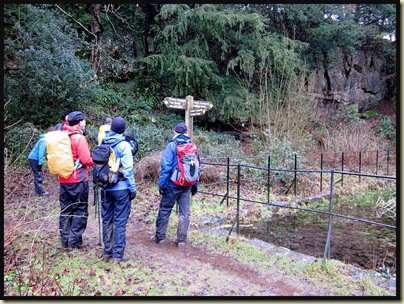 The pace increased as we hastened to meet a 4pm deadline at the RSPB centre.  We rushed past Wolf House Gallery, shut for the month, and on along pleasant paths by Jack Scout, where the trees lean landwards – it’s clear where the wind prevails from here.

The sun came out as we rounded Jenny Brown’s Point! 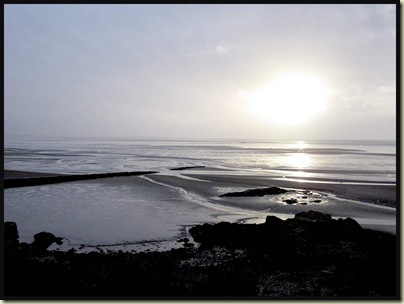 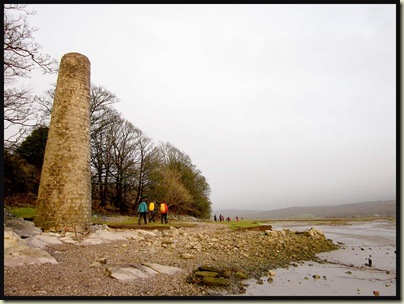 Our party sloshed its was across and around the path that skirts the salt marsh as it heads back towards Leighton Moss.  We’d exchanged all our TGO Challenge plans by now (seven ‘Challengers’ were present), and the attractions of either a pot of tea or a sighting of the starling roost at the RSPB centre were foremost in our minds.

Gayle disappeared to recover a dropped map case.  Luckily, she found it.  We made it back just after 4pm.  The pot of tea was great, the starlings were not at their best – there had been 50,000 displaying their pre-roosting antics hereabouts last week; maybe many of them have now emigrated. 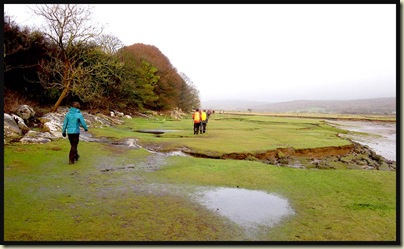 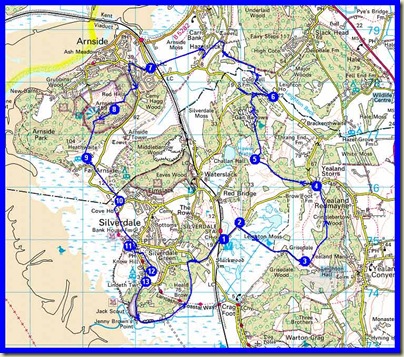 That was an excellent day out.  Thanks go to Heather for organising it and to Rick for doing the driving for the Timperley contingent.  Just as well, as my keys disappeared during the course of the day, hence Gayle and Mick retracing our steps today.  £75 for a new car key!  Ouch!

LATER:
Gayle’s take on the day, with some different images, is here.