A Rare Sight in Timperley 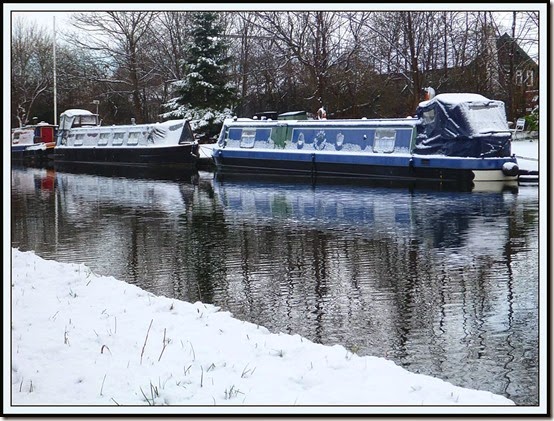 We woke today to a rainy morning, but long after Sue had departed for work, the darkness subsided and so apparently did the temperature.

The rain turned to snow, giving me this rare view from the study window. 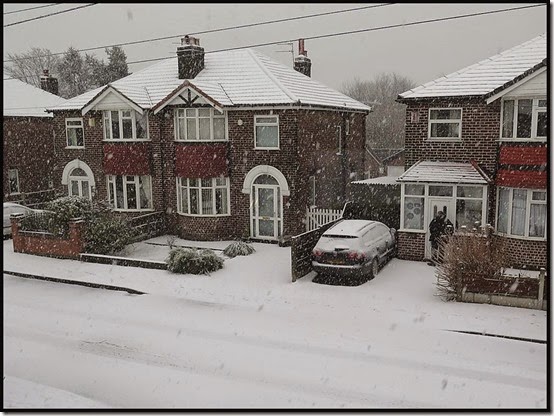 I couldn’t go out as I was waiting for a Special Delivery, but once that had arrived, and the snow had stopped, I ventured out – making the mistake of wearing trainers, which soon became waterlogged in the slush. 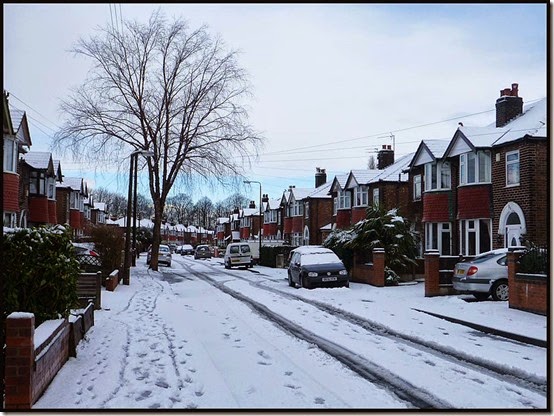 After slithering up to the canal towpath, I wondered whether it may have been better to travel by bike today, as the snow was melting fast. 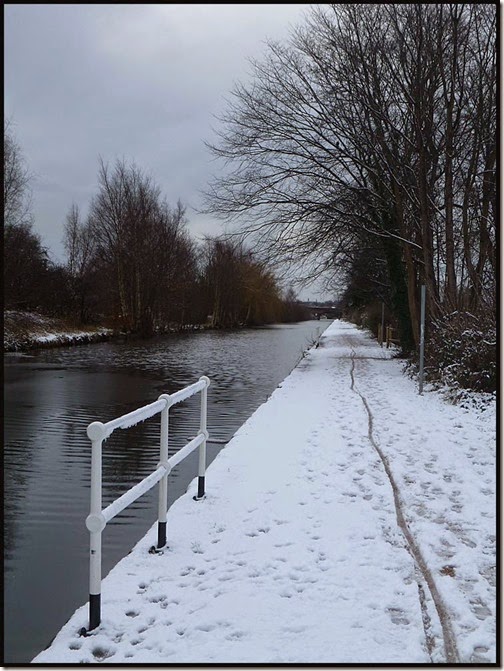 However, the sky was clearing and the temperature was dropping. The slush was very cold as I trotted past Walton Park. 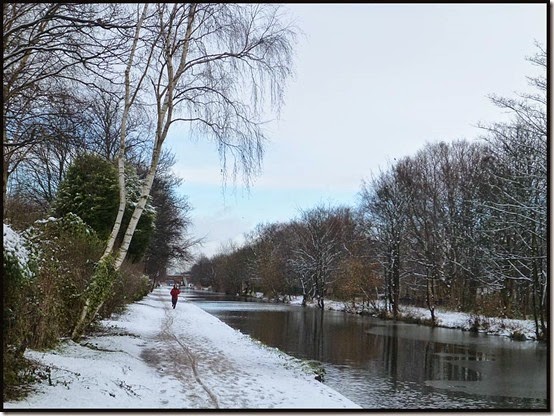 Here’s the view from Marsland Bridge. When I get time I’ll have to play with this image and make it black and white and green. 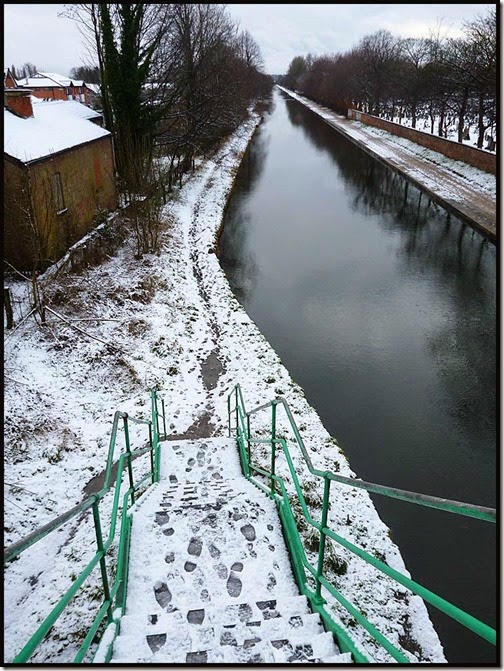 Whilst I was out, many trams passed me on their way to and fro from Altrincham. Quite a surprise as the slightest bit of bad weather often halts them (or am I being cynical?). 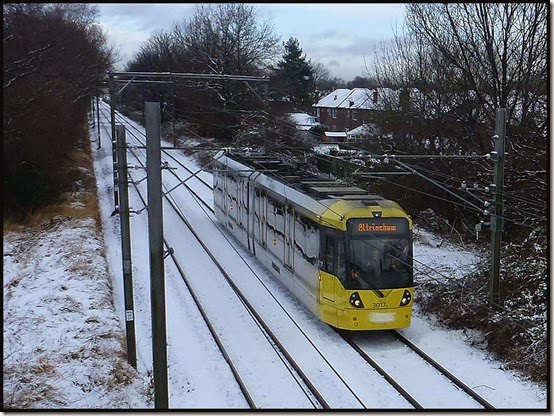 It would have been good to experience some nice crisp creaky snow, rather than the slush which is currently in the process of freezing. Perhaps we’ll have to go elsewhere to find that… 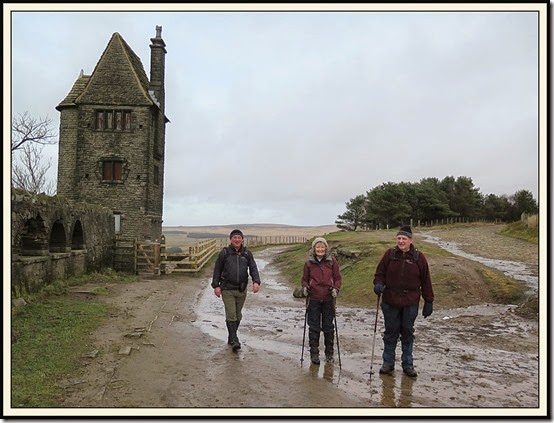 It had been a while since I’d seen Alan R, so it was good to meet up at short notice in Rivington. Viv and Neil had spotted the ‘short notice’ event and it was good to have their company as well. Alan has had a bad knee for some time, so this amble was intended as part of his recuperation. I think it worked.

Viv and I had a very easy drive from Timperley, leaving us with a leisurely forty minutes to enjoy coffees at the Lower Barn. Travelling similar distances from north Manchester, and setting off from home at the same time as we did, Neil and Alan had less success with the heavy traffic. Anyway, there was no hurry, and by 10.45 we were heading off to the Upper Barn and along the rising track to the ‘Pigeon Tower’.

Built in 1910, and with Lady Leverhulme's sewing room on the top floor, it was renovated in 1974 and re-roofed in 2005. (That’s at least the third time I’ve written those words on these pages – one day perhaps I’ll be able to actually remember these facts!)

On the pleasant but overcast January morning we continued on to Rivington Pike Tower, situated on a knoll at 363 metres, a hunting lodge built in 1733. Unfortunately, access to the interior of the lodge and its spacious cellar is not available to plebs. The steps are well constructed and convenient, though Alan’s knee preferred the grass. 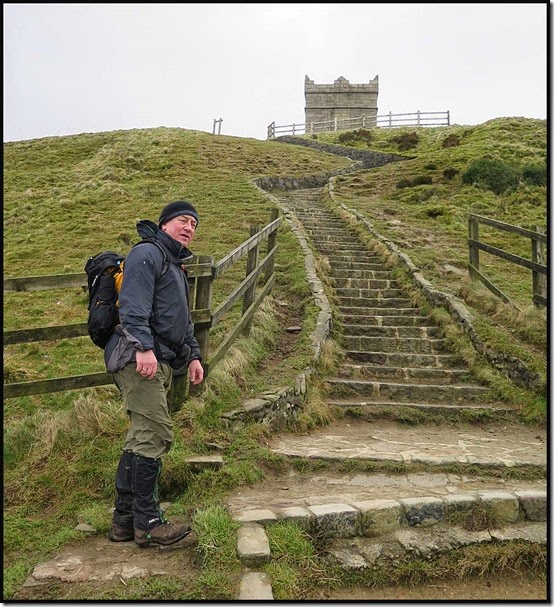 The high point around here, familiar to all who use the M61 motorway, is Winter Hill and the array of masts that adorn its summit. It wasn’t on today’s itinerary, but as you can see below, there’s a well worn and rather boggy route from the Tower to the 456 metre Hill. The first mast was put up in the 1950s, and they have been replaced and added to since then. The hill is also the site of Bronze Age burials (1600 to 1400BC), the graves of two sons of King Edgar (1097 – 1107) [it was formerly known as Edgar Hill], an 1838 murder, and several air crashes and UFO sightings. More here. 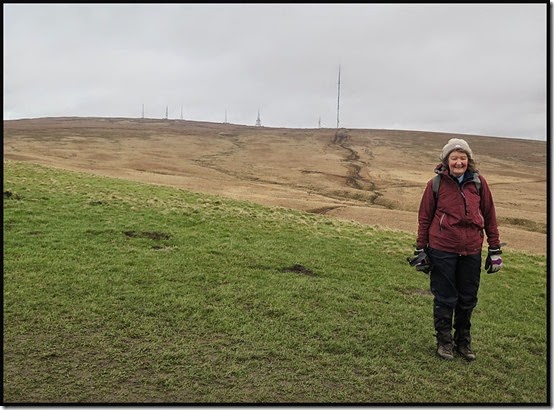 A cool wind at the Tower didn’t stop us noshing some cake, before ambling back down to the woodland of Lever Park, a designed landscape between the open moorland and the chain reservoirs which incorporates the village and buildings of Rivington into the overall design and is "one of the largest and most impressive examples of landscape design in Edwardian England". It is of national importance and historical significance but has been neglected and has deteriorated. Situated on the east bank of the Lower Rivington reservoir, the park is named after William Lever, Lord Leverhulme, who bought the estate in 1900 and donated 364 acres  of land to the people of his native Bolton as a public park. Lever was allowed to continue with plans to lay out Lever Park at his own expense, and he maintained it during his lifetime. The park opened in 1904 and contained a boating lake, a zoo, tree-lined avenues and a network of footpaths. Rivington Castle, a folly, was built as a scale replica of Liverpool Castle at Coblowe Hillock near the Lower Rivington Reservoir. There’s not so much as a bench on which to enjoy your cuppa. 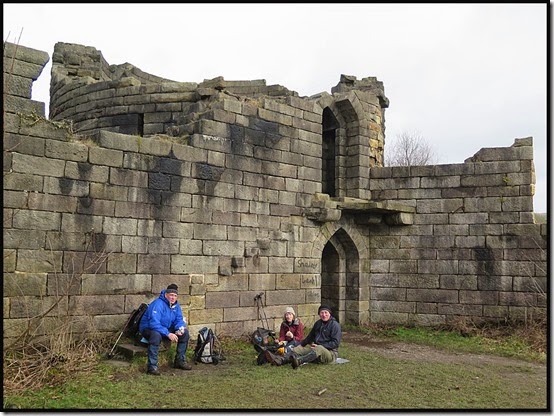 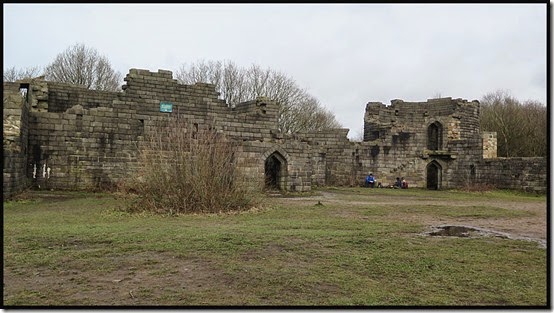 The castle overlooks the Lower Rivington Reservoir. Wikipedia reports that Rivington was dramatically changed by the construction of the Anglezarke, Upper Rivington, Lower Rivington and Yarrow reservoirs which were built to provide Liverpool with a safe, clean water supply. Nine properties in the valley were demolished before construction work began. The Rivington Pike Scheme, still in use today, was undertaken between 1850 and 1857. The scheme was to construct five reservoirs and a water treatment works at the south end of Lower Rivington with a 17-mile (27 km) pipeline to storage reservoirs at Prescot. Water from two higher level reservoirs, Rake Brook and Lower Ruddlesworth, was carried south in The Goit, a man-made channel connecting them to the lower reservoirs. The scheme was expanded in 1856, to include High Bullough Reservoir, built in 1850 to supply water to Chorley. The scheme was further expanded by the construction of the Upper Roddlesworth Reservoir in 1867–75 . Work on Yarrow Reservoir began in 1867.

In 1900 Liverpool Corporation attempted to acquire the entire area to safeguard its water supply, and proposed to demolish the entire village. Some buildings were protected and others left vulnerable in an Act of Parliament known as the Liverpool Corporation Act 1902. This allowed the corporation to acquire by compulsory purchase properties in the west of the village, including the Black-a-Moors Head public house and the New Hall, which were demolished between 1902 and 1905. The result was the small settlement that has remained largely unchanged since then.

Here’s a view from the Castle. 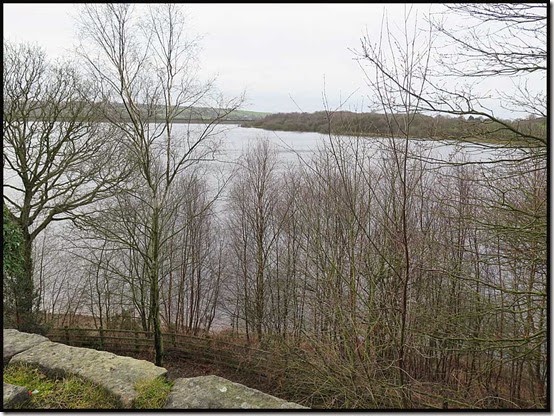 Returning to the Lower Barn via the woodland path beside the reservoir, a couple of young wood mice were seen scurrying around. This one was clearly lost and disorientated. Alan kindly returned him to the home that had been revealed by his brother. 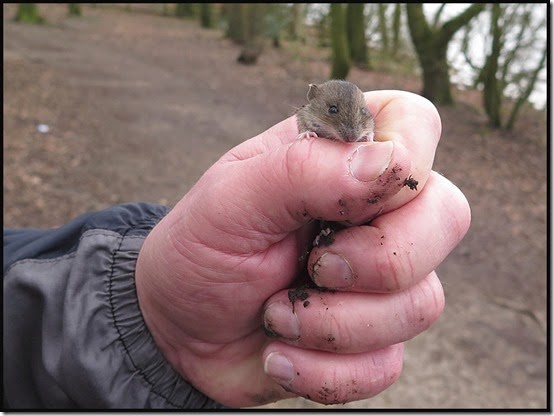 A pleasant woodland path led back to the Barn, after this pleasant and sociable outing, with shafts of sunlight greeting us at the finish. 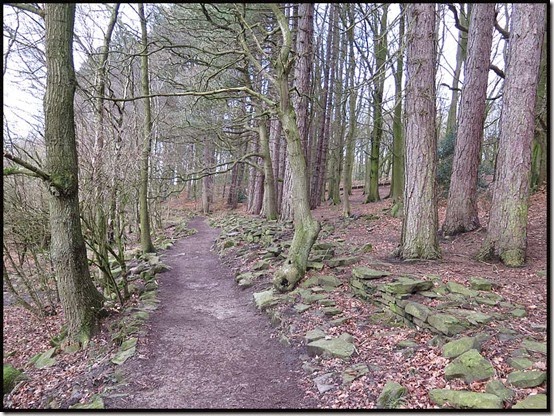 There was plenty of time to return home for lunch, though for the forthcoming programme of three further walks, lunch will probably be taken at the end of the walks. (See below.)

There’s lots more about the history of Rivington here, and the route of our 8 km (5 mile) stroll with over 200 metres ascent, taking around 2 hours, is shown below. Alan’s excellent report, with more history from Wikipedia, is here. 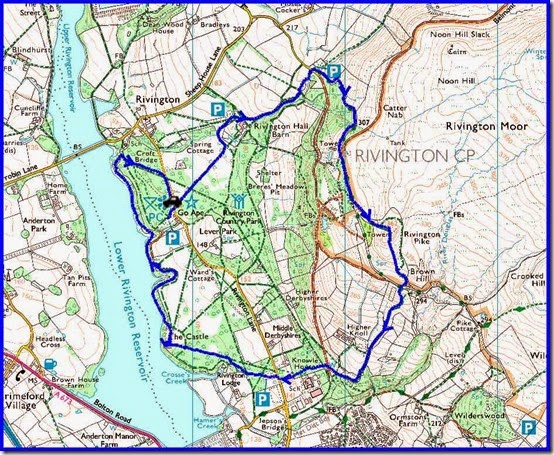 Further morning walks on which all are welcome:

Thursday 23 April - Suitable for Tortoises. Meet at Bury Metro Station (SD 804 105) at 10.30 am for a muddled (perhaps muddied) route via Greenmount to the Hare and Hounds in Holcombe Brook. Approx 10 km (6 miles). 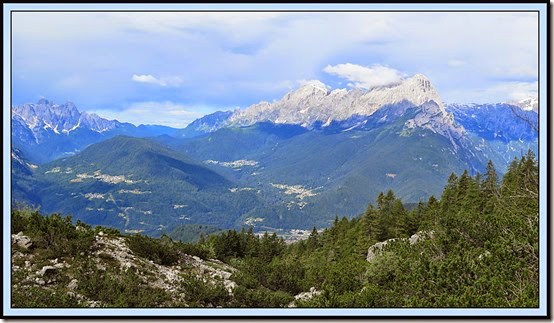 I’ve recently spent a happy few hours indexing our summer holiday 2014 photos and uploading slideshows to Picasa. The set is now complete, so those wishing to dip in to our/their memories can now do so with ease from the existing index page here. 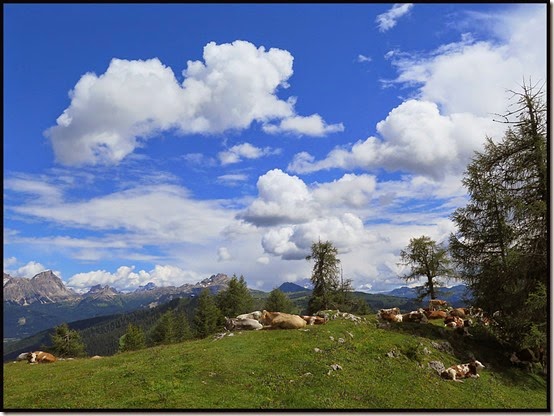 Posted by Phreerunner at 14:55 No comments: