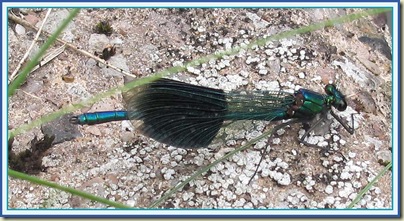 After noting recently that the ‘rare’ Banded Demoiselle Damselfly is the emblem of the Mersey Vale Nature Park, it was still something of a surprise to see one today by the Bridgewater Canal.

According to Wikipedia it is “a large damselfly with a total length of up to 48 mm and a hind wing length of up to 36 mm.  The male has translucent wings which each have a broad, dark iridescent blue-black spot (or band) across the outer part. On immature dragonflies the spot is dark brown. The body can be a metallic blue or blue-ish green.

Sue, Dot and I had enjoyed a short stroll around Dunham Park, where the ‘fountain’ was conspicuous for its green-ness rather than for its fountain. 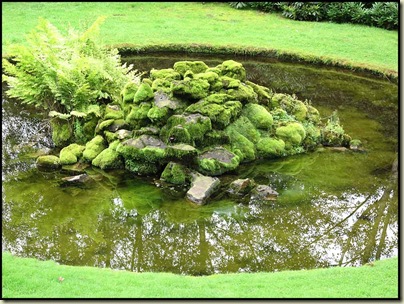 A large group of Fallow Deer bucks lazed near the entrance, seemingly weighed down by their new horns. 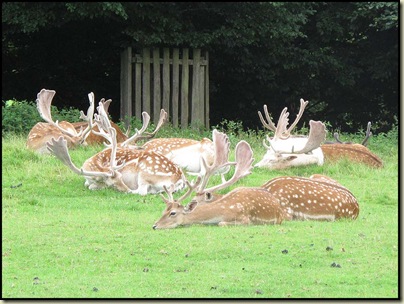 The house was still standing proud, with the coppiced trees that were bare a few weeks ago now looking like dark green lollipops. 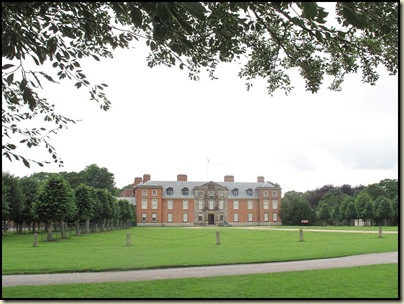 After a tour of the grounds and a luxuriant coffee, we headed down to the Swan with Two Nicks and onto the canal towpath.  The weed below – perhaps a Black Knapweed, was busy with insect life. Mark would probably identify the bee as a Red-tailed Bumble-bee, Bombus Lapidarius, but I can’t ‘sex’ it as I can’t see whether or not it has a collar! 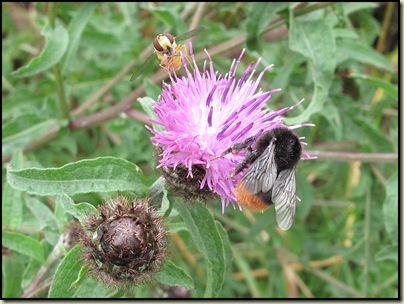 Then we saw the Damselfly.  Quite exciting really – we watched it for ages, though we failed to get the desired picture of it flying.

The images below were the best I could manage. 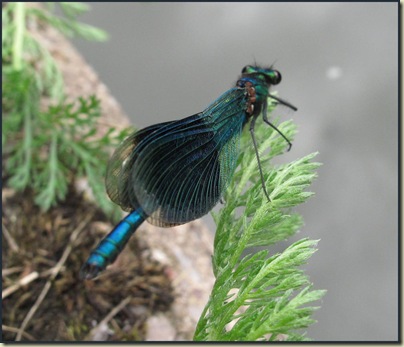 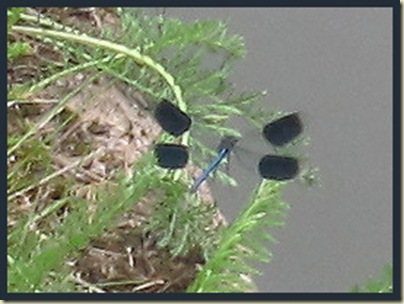 All in all, a very pleasant little excursion. 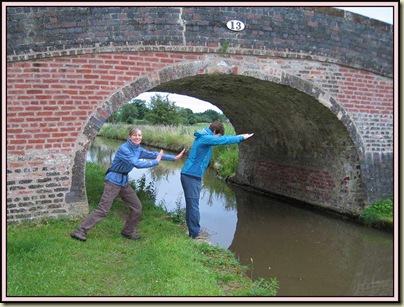 Our jolly little band of five assembled in the busy Cotton Arms and waited.  “Trekking Britain (aka Jamie) might arrive” I pronounced.

“Hello” said a familiar voice.  It was Anne, an unexpected addition for tonight’s stroll, the venue for which had shamed this resident of ‘near Nantwich’ into joining us for the evening.

Next time, perhaps, Jamie – a bit closer to home.

Most of the evening’s photos were blurred due to poor light, so there’s no picture this time of the wooden bascule (lift) bridges, raised and lowered by counterbalancing beam weights, that are a feature of this stretch of the Llangollen Branch of the Shropshire Union Canal.

There is also a selection of shapely single span brick bridges like ‘Number 13’ above. 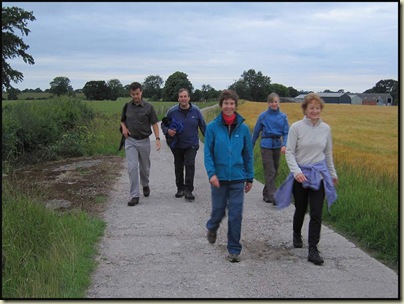 We followed a route described in Jen Darling’s ‘More Pub Walks in Cheshire and Wirral’ (Page 100).  I won’t describe it in detail, as you should be able to work it out from the image below.  The first half was through pleasant enough farmland on well marked paths blighted only by frisky cows and electric fences randomly placed without any consideration for users of the footpaths.  Andrew’s jacket served as a good insulator, even if it did bring some of the fences down.  Another example of inconsiderate Cheshire farmers – it’s really so simple to cater for footpath users and electric fences, but they seem to prefer to have their fences pulled down.

The frisky cows were friendly enough, even if Jenny didn’t appreciate their attention, but a picture of an angry bull on a stile as we exited one field served to further incriminate the local populace.

After that, the stroll along the canal was very easy and jovial.  Just as well.  It got dark.

Here’s the flattish 9 km route – it took about 2¼ hours at a very gentle pace. 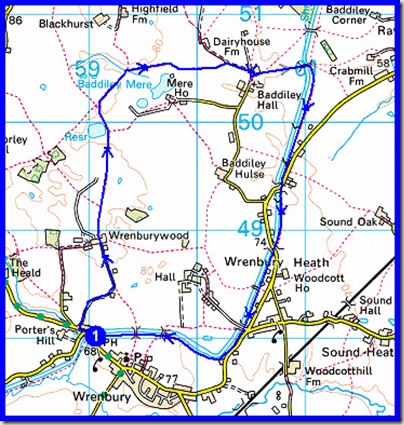 Posted by Phreerunner at 23:33 No comments: 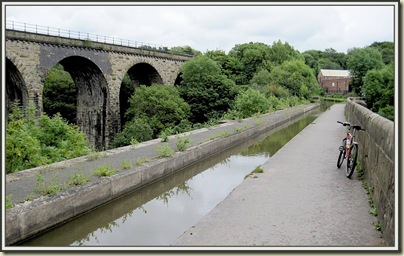 “A little less than 50 years ago the Marple Aqueduct was close to ruin. After gradual decline due to lack of maintenance over many years, water began to seep into the stonework. During the long cold winter of 1961-62 this froze and caused severe damage to the walls of the Aqueduct and a large section fell into the River Goyt below. At this time the canals were already un-navigable due to the sorry condition of the locks and it looked like time might be up for this magnificent structure, once described as "a wonder of the age" by author George Borrow.”

I’ve extracted the above words from the full story of the 200 year old aqueduct.  During my days in Manchester the canal has been lovingly restored and, like many others in the area, is now unrecognisable from its former disreputable state.

Sadly, this morning I didn’t have time to wait for a barge and a train to enter the frame (another time, perhaps), but you can see that the towpath is accessible by bicycle.  There are more pictures in this posting.

Sue had wanted to visit Lyme Park, so whilst she drove there I cycled by a route intended to avoid any roads.

The Bridgewater Canal leads easily to the Mersey Valley, where I paused by Chorlton Water Park with a couple of wardens, trying to spot families of Whitethroat and Bullfinches that they assured me lived in the woods by the golf course.

On the approach to Stockport an information board next to a giant wooden fish explained that this was the site of Heaton Mersey Bleach Works, dating from 1784, one of over 100 industrial premises built in this area from the late C18 through to early C20, many of which presumably got their power from the river. 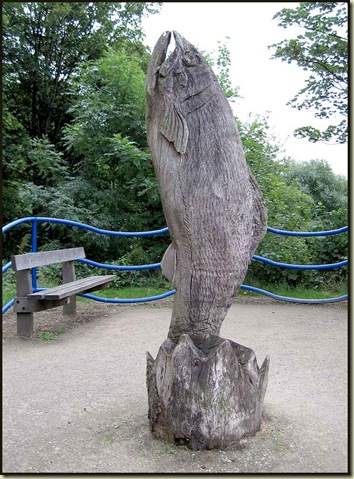 Over the past 60 years the river has gone from being one of the most polluted in Europe, to being a home for a variety of freshwater fish.  The rare Banded Demoiselle Damselfly is also reputed to be here; indeed it is the emblem of the Mersey Vale Nature Park.  I didn’t see any!

My ride progressed along the river bank at a leisurely pace all the way into Stockport, where a closed path ushered me into a trading estate that drove me inexorably into the centre of town, which luckily is pedestrianised.  I’d thought that the route of the Midshires Way would draw me nicely along to the Peak Forest Canal.  I was mistaken – the footpath through Vernon Park is just that, a Footpath.

After pushing (literally) on to the slightly more spacious Woodbank Park I gave up on the Midshires Way and cycled through Offerton to renew my acquaintance with the River Goyt at Chadkirk.  A quiet lane then took me to the canal, which I joined just after passing St Chad’s Well, which is marked on the OS 1:50000 map. 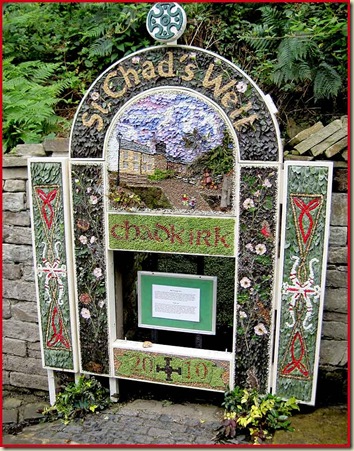 Local tradition says that this is a holy well associated with Chad, the seventh century Bishop of Lichfield, who came as a Christian missionary to this area.

The practice of Well Dressing apparently dates from Celtic times.

There’s also a tradition of making a votive offering to the gods; this could be a small coin or even a bent pin.  Or half a pork pie?

Anyway, a short carry up a flight of steps brought me at last to the towpath.  I soon had to leave it to go over a tunnel, but then it was a straightforward ride over the aqueduct, up the long flight of locks to Marple, and on along the Peak Forest Canal to the outskirts of New Mills.  I turned right up to Seven Springs and Brines.  This would be better in the other direction; my limited ability on the bike meant that I was unable to find the necessary traction to negotiate the steep stony track any other way than on foot.  Which made me a little late for my rendezvous with Sue in Lyme Park.

So ended a pleasant morning’s ride, in gloomy conditions.  Next time I may choose to follow the Trans-Pennine Trail through the Mersey Valley and on to its junction with the Cheshire Ring Canal system, which I would follow to a track leading into Lyme Park from beyond High Lane.  That may be a better route. 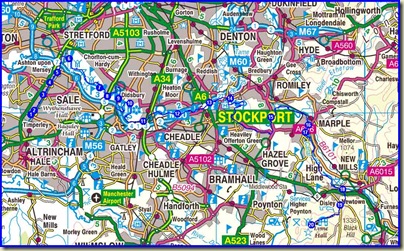 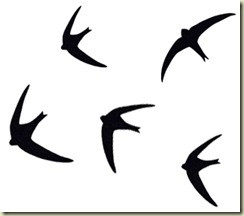 Our swifts arrived in mid May whilst I was walking across Scotland.  They’ve been living in our eaves just above the study window for about ten weeks.  Long enough to produce a family and feed the youngsters for about six weeks, after which time the young fledge and are immediately ‘on their own’.  They live their lives on the wing, and will fly continuously for about four years, before returning to breed.

We’ve had them for many years.  The pairs mate for life and return to the same nesting spot.  Last year ours returned very late, so perhaps we gained a new pair.  This year they arrived on time.  They have headed off to Africa – south of the Sahara I think; I wonder if they have reached there yet?

We will miss them. 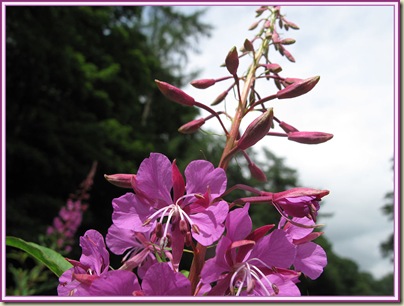 Hello all, apologies for the recent hiatus.  I’ve been taking a break.  I’ll now try to catch up…

Some ten days ago I revisited this excellent mountain bike route, details of which I don’t need to bore you with, as I reported in more detail on 21 September 2009.  The route is described here.

At this time of year many of the hedgerows are lined with a garden weed that looks quite colourful in the countryside - Rosebay Willowherb, pictured above, and this very week (the last week in July) is the time to harvest the bilberries that abound in Charity Lane, the rough track that links the hamlets of Walker Barn and Macclesfield Forest.

I wasn’t equipped for the bilberry harvest – I left that to the lady with a large vehicle and a fancy Norwegian ‘bilberry collecting gadget’.  But I did pause at the summit of Charity Lane, at around SJ 967 727.  This is a ‘Favourite Place’.  It’s a high point of the ride, at 475 metres – nearly 300 metres higher than the starting point by Ridgegate Reservoir.  It follows nearly 40 minutes of fairly unrelenting ascent and is a good spot to pause with a cup of tea before tackling the sporting descent that follows.  The views aren’t fantastic, but do stretch across to Shining Tor and the High Peak (top left), and over to the second and highest high point of the ride – the Cat and Fiddle, at 515 metres (on the horizon, top right).  The track is a brilliant mountain biking surface, as shown on the lower images. 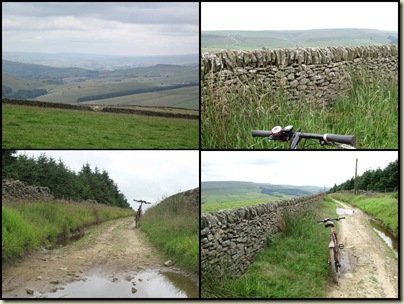 The groove of the track slowly deepens and the rocks get larger as it continues towards Macclesfield Forest.  Care is needed, but one of the beauties of this entire route is that dismounting is necessary just once (for a non-expert like me), near the start, to ascend some steps on the track below Tegg’s Nose. 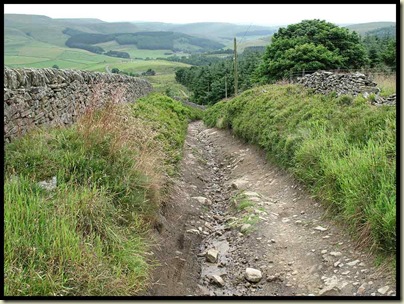 Care is needed on steep gravel though, so don’t be afraid to get off, but that would deprive you of the chance of testing your skills…

On reaching the A54 road a view of Three Shires Head is soon gained.  This is the junction of Cheshire, Staffordshire and Derbyshire, shown in the distance beyond the field of sheep. 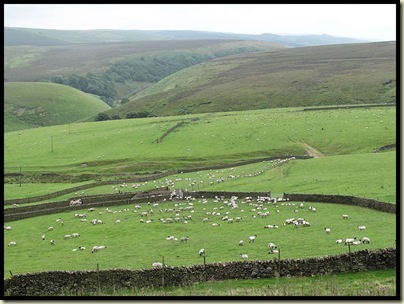 With no punctures on this occasion, it was a fairly quick buzz around the circuit, with an exhilarating final descent.  Home in time for lunch.  [Sorry, Geoffrey, I only decided to do this after breakfast – didn’t have time to order any of your coffee!]

Here’s a reminder of the route. 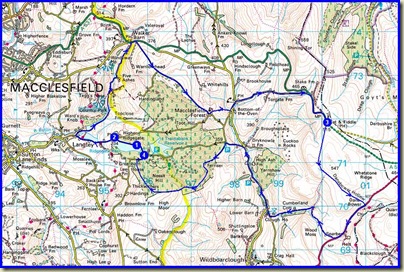 Posted by Phreerunner at 17:09 No comments: