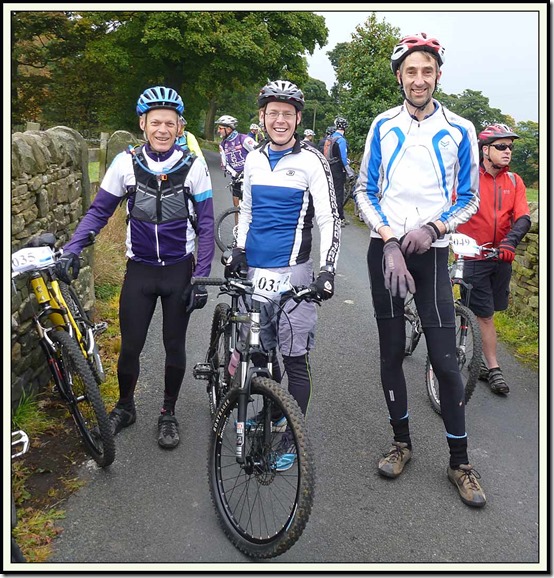 Yes, it’s that time of year again, and we have the same crew as last year – me, Robert, Paul and Greg. The picture above shows Paul, Greg and Robert at the start.

Robert returned to his bike after he had taken the picture below and started way ahead of the rest of us. We didn’t see him again until near the finish. 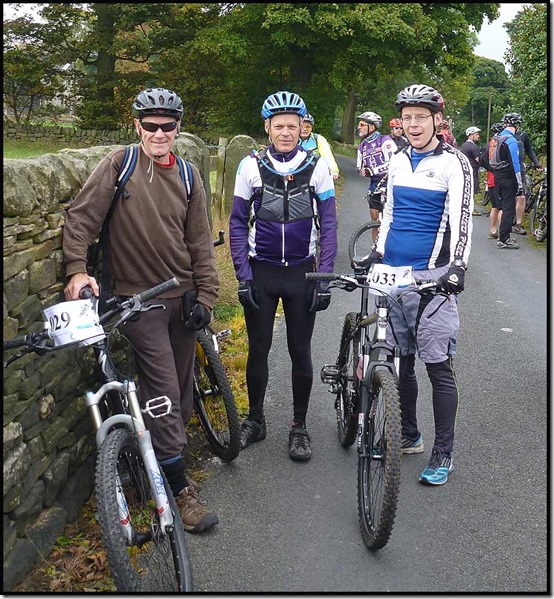 You can see that we dress immaculately for this event – apart from me – I seem to be wearing the same clothes that I was in for yesterday’s parkrun! (Two seconds off a PB, very frustrating.)

The most observant will see that I have (temporarily?) retired my 25 year old Shogun bike from the event this year, in favour of nine year old ‘Stumpy’ that I finally got used to riding during my recent TransAlp trip. I must admit that the ride was much smoother with suspension, though I found myself being more hesitant on the technical descent from Midgley Moor. (Maybe that’s an age thing – there were only seven over 60’s in the 292 strong field, two of whom retired.)

As last year, the three of us started gently at the back of the field, leaving Robert to shoot off and complete the course in 2 hours 55 minutes, his fastest time in thirteen attempts.

The field quickly spread out – well, it shot off ahead of us, and I was again able to enjoy the fast descent to Mytholmroyd at my own pace.

Shortly after that descent, the first checkpoint is reached, near Hebden Bridge. I waited for some time for Paul and Greg to appear (I thought Paul was ahead of me but I’d inadvertently passed him). Eventually they turned up. 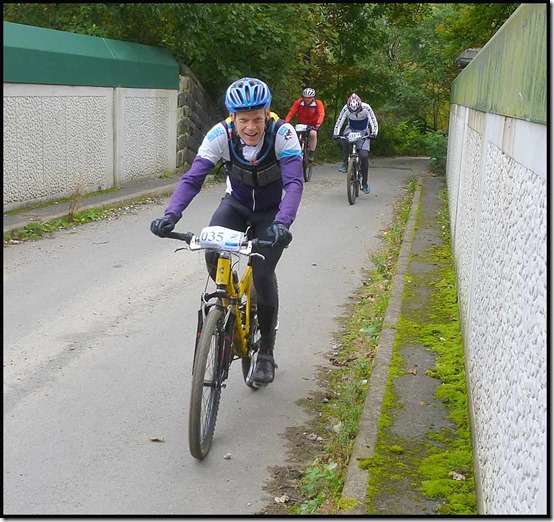 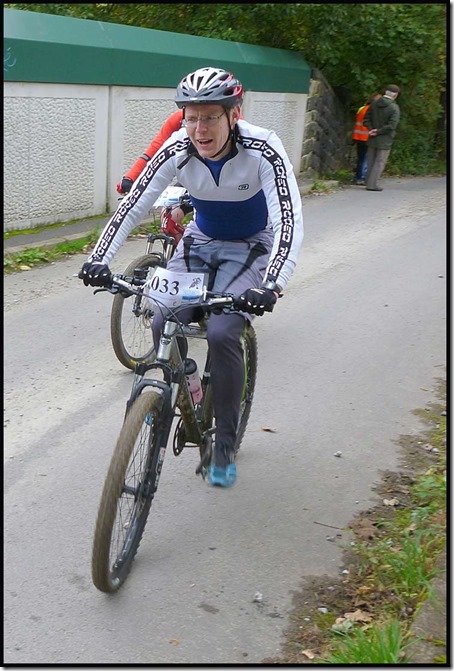 We agreed that I’d go ahead at my own pace in the fast, dry conditions. Perfect weather for the event.

The marshalling and signage and checkpoints were superb as always. There’s no need for a map on this event, and no chance of leaving the route unless you ignore the signage.

I waited for a while at Grain Water Bridge checkpoint. Cold drinks, bananas, mini Swiss rolls and jelly babies were the favoured foodstuffs of the day, so there was no need to carry any food or water. 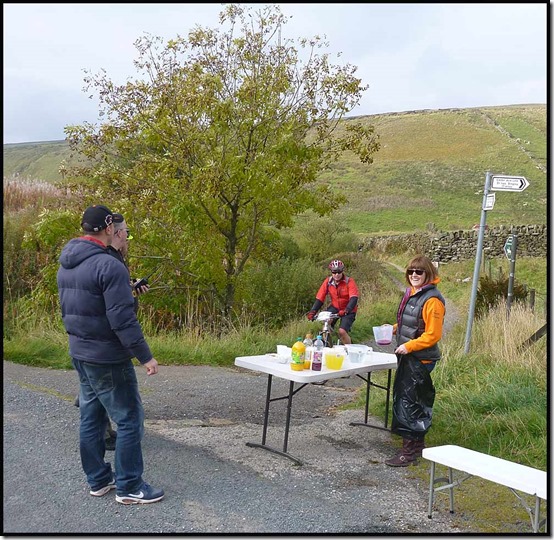 I continued over Midgley Moor without incident, though others all around me seemed to be practicing their somersaulting techniques.

As last year, I was encouraged up the final hill by Robert, who had come back down to Luddenden Foot to meet us.

3 hours 29 minutes was my time at what seemed a very gentle pace – a nice morning’s ride, and Paul and Greg pedalled in shortly afterwards, taking 3.44 and 3.47 respectively. The full results are here. 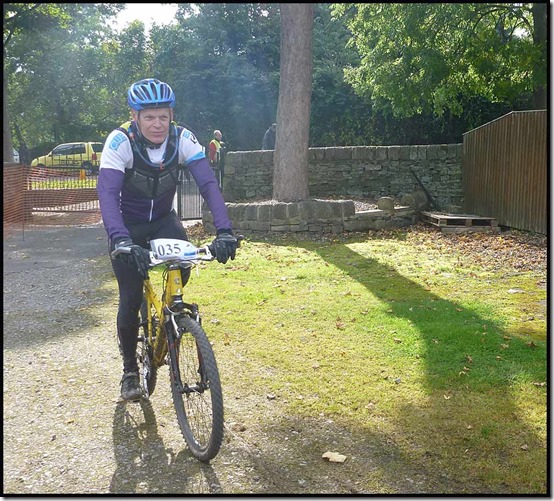 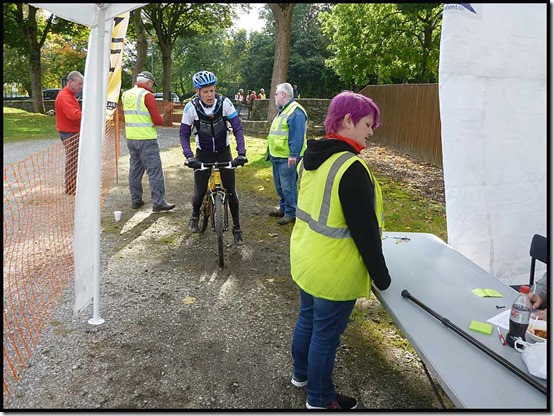 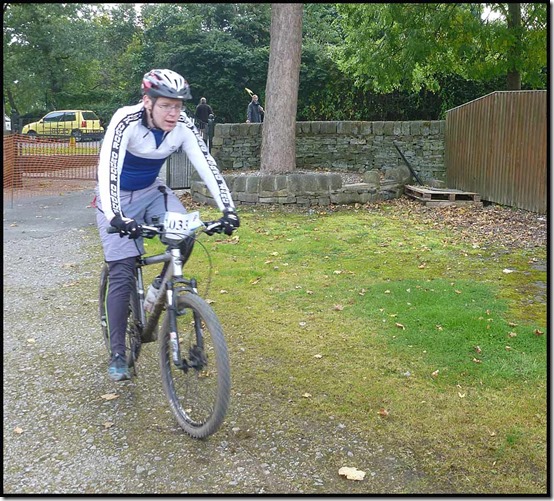 You’ll see that in contrast to last year, when Greg relaxed into a ‘Lazy Moment’ at the finish, this year he was moving so fast that his image is blurred!

After tea, soup and chilli, we adjourned as usual to the Church Stile Inn for beers. Then it was back to collect certificates and buffs (this year’s alternative to t-shirts) before wending our way home.

I can only repeat that the support is amazing for the modest entry fee of £15.75, especially as it’s a fund raising event for a local scout group. A big vote of thanks to the organisers, marshals and support point volunteers. They should be proud in that their standards are much higher than those of many commercially organised events. 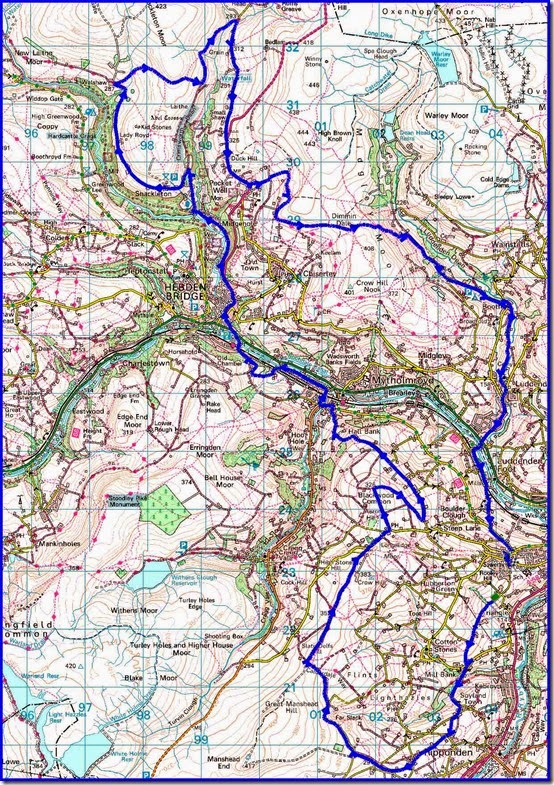 This is the eighth time I’ve cycled in this event since starting ‘Postcard from Timperley’, hence the fairly brief report.

The other reports can be found here, and the route description and results summary are here. The CMBM website is here, with this year’s results here. I’ve just put 9 October 2016 in the diary… 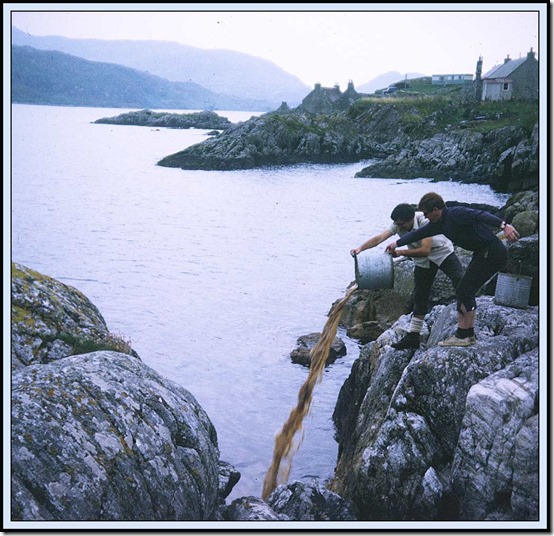 Sue and I had the pleasure of attending Stockport Walking and Outdoor Group’s 60th birthday party on Saturday. It was a joyous occasion, enjoyed by many of the current 150 members and by many ‘old’ members, few of whom we knew as we are recent newcomers to this group.

The group was one of many set up by the YHA after WW2, and unlike many of its contemporaries it has continued to thrive and is currently very active. Curiously, one table was occupied by folk who claimed to have joined the club in 1952, some 63 years ago. This minor ‘discrepancy’ was glossed over, though I noticed a few askew glances from folk wondering whether the party had been hijacked by the inmates of a nearby old people’s home!

It got me thinking about my own youth hostelling experiences. On at least two occasions, at Westerdale and at Glenbrittle, I was arriving with groups but the warden wouldn’t be there. “The key is under the mat – make yourselves at home – if you can make it through the snow.”

In those days there were fewer hostel staff and guests always had to carry out a duty. The header image shows Jim and Howard carrying out their duty at Stockinish Hostel on Harris (NG 135 910). The hostel, open between 1965 and 1998, was an old school. When we visited in September 1968, on my first trip to Scotland, there was no sophisticated sanitation. We pooed into a bucket, which was emptied into Loch Stocanais. I wonder whether the locals still have to do that? 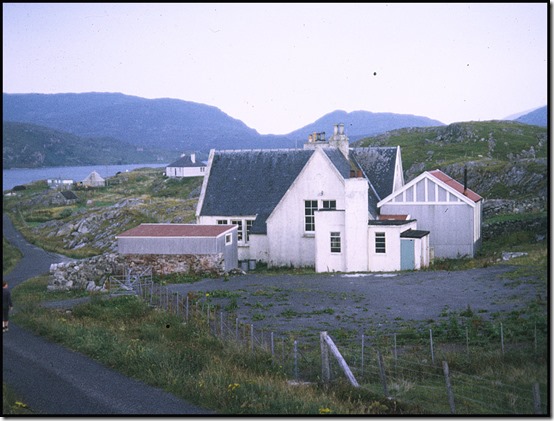 And here’s Howard (RIP) with the Austin Devon estate car that hauled us around Scotland that September. It managed about 40 miles a day before requiring some sort of TLC. It’s pictured in 1969, on the day it was taken to the knacker’s yard, outside our rented house in Drury Street, Levenshulme, a ‘two up, two down’ with a small kitchen tacked onto the living/dining room. No bathroom or indoor toilet – just a tap in the kitchen and a toilet outside in the yard. 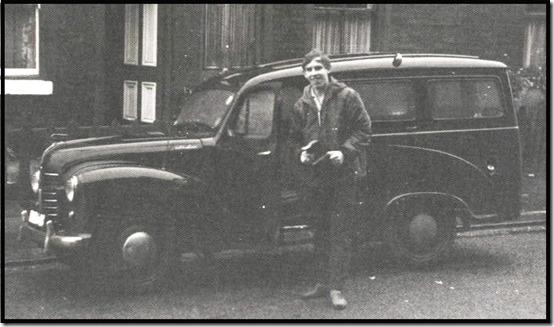 We used to take our showers in the Students Union at UMIST – a wonderful place that also had a great refectory, if you didn’t choose to eat chicken biryani at the Plaza Café on Upper Brook Street.

Many of us travelled by bicycle in those days (some things don’t change), picking up unclaimed bikes from the police when ours were either stolen or ‘died’. I remember a long walk to a bike shop one day when my bike’s front wheel’s spokes decided to call it a day. Buckled wheels from hitting kerbs at speed, usually at night with dubious lights, were a common occurrence.

That’s all for now. I’ve emptied the loft and have a house full of boxes (rubbish, memorabilia, photos, toys, etc etc) to ‘process’.

Posted by Phreerunner at 10:16 No comments: