A Family on Holiday 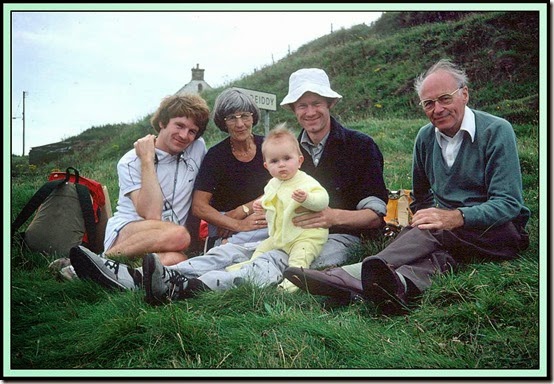 Drove down to Middle Mill after work on 13 August, arriving 11.30pm.

After a good night’s sleep on a not so rough blanket (I forgot to bring a sheet), we arose and I walked to Solva and back with Kate on a bright, sunny day with a pleasant breeze.

Left Metro at Abereiddy and we all went to Whitesand Bay to commence a coastal walk. R’s bladder in difficulties as usual, and he was also accompanied by a portable stereo cassette unit with expensive looking headset. Dot performed her ‘lost grockle’ act and confused some Americans.

Bright yellows and reds – mainly from gorse and heather.

Lunch at Carreg-yr-afr (or thereabouts). R absent (doing a Laurie)[Laurie is an old friend who was notorious for random disappearances – he was often abandoned in remote spots, but that’s another story]. Kate hungry – ate sand. Seal seen, but lunchtime was converted to a dolphin observation session.

Continued along very pleasant coastal path (Pembrokeshire Coast Path). Kate slept. Buzzed by black and white bird. Reached Abereiddy for ice cream and coffee and biscuits on nice grassy slope by beach. [This must be where the picture was taken.] Kate cheered up and ate half a ‘mothers’ biscuit [and probably some more sand]. Trundled back in the Metro to find the Renault at Whitesand Bay.

The Hard Men of Wythenshawe Parkrun 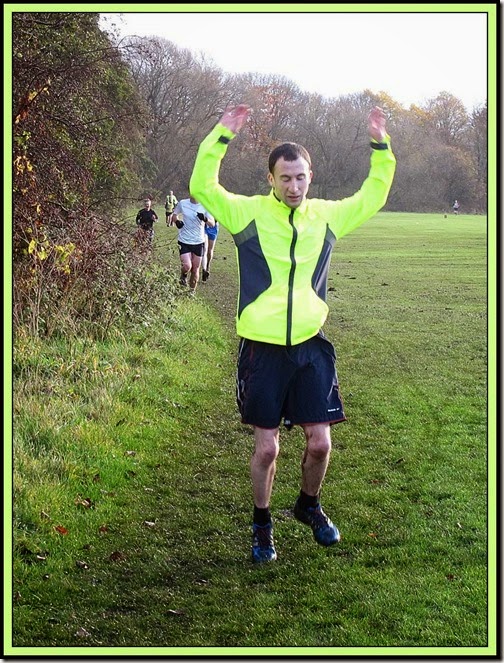 Sue and I have been doing Saturday morning Parkruns for a while now. We’ve enjoyed encounters with long standing friends, and with others who have become friends. Wythenshawe is our usual venue, and so it was yesterday.

A quick scan of the results for this 5 km ‘jog’ reveals characters not quite as ‘soft’ as the ‘5 km jog’ label may suggest.

First in was ‘Skippy’ an old colleague of Sue’s whose Ironman exploits are recorded here. Skippy is quite fit at present, or so it seems.

Second was Olly, recently returned from the Lavaredo Ultra Trail – a mere 119 km with nearly 6000 metres of Dolomitic ascent – which he completed in 22 hours or so. “Very doable” he comments, modestly.

The Barbers are frequent runners, when not out on their bikes doing time trials or events such as today’s 130 km in the rain over the Welsh hills.

Paul Muldoon is another loony (can you tell from the picture?) who can often be found running marathons or longer, and Richard Evans, down in 9th place today, takes no prisoners on these little jaunts, leaving son Joe to trail far behind as he aims for another Personal Best.

Ken Burgess, in his mid 70’s, is a local running legend and usually far ahead of me despite my age advantage.

I could mention many more – the Holloways for example, and the vast majority are folk not known to me, but all with their own stories. Not everyone dashes over the line in less than 20 minutes – that’s usually the privilege of the top ten – and yesterday’s ‘tail’ time of 46 minutes in position 172 is normal for the event, which draws into its ‘family’ folk from all levels of fitness and all walks of life.

Parkrun – a wonderful institution – no wonder its founder recently received a CBE award for 'services to grass roots sports participation'.

Congratulations to the 50 or so people out of Wythenshawe’s 172 starters who yesterday managed a Personal Best on the 5 km course – well done!

Posted by Phreerunner at 23:55 No comments: