Old Trafford filled up tonight for the type of cricket I’ve been playing after work for over 30 years. It was a shame that the New Zealanders were unable to compete, but the sun shone and everyone seemed to be enjoying themselves.

Andrew and I glanced across to the nearby suits of my former employers (he is still a client) and we were happy to be able to enjoy the game [it was a game, not a contest] without the need to make small talk with the inevitable guest or host who really doesn’t want to be there.

Thank you Richard for organising the tickets, and sorry Chris - didn't get a chance to chat to you - never mind!

(I apologise to readers who don’t understand cricket. There are far better pages than these to learn about the game. Suffice to say that in footballing terms the score was England 9, New Zealand 1)

Posted by Phreerunner at 00:17 No comments: 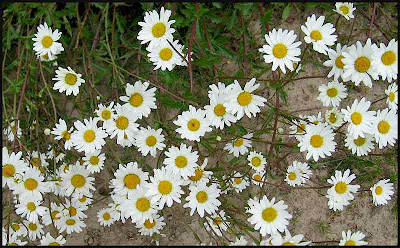 Amongst all the colour in the local hedgerows just now, the bright white swathes of ox-eye daisies are currently the dominant feature along the disused railway line that links Altrincham and Lymm.

Posted by Phreerunner at 23:53 No comments: 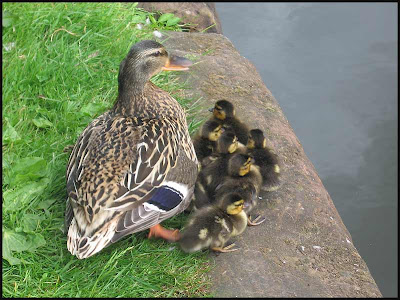 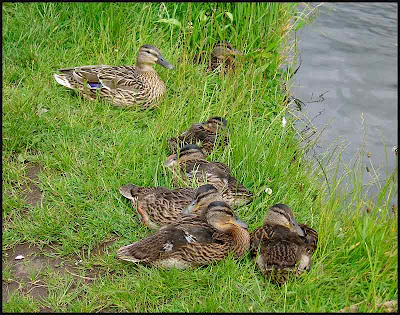 Posted by Phreerunner at 23:50 No comments: 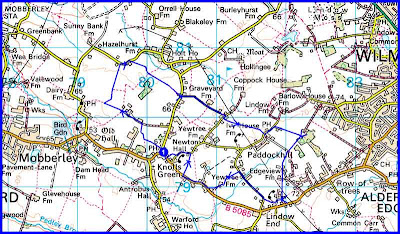 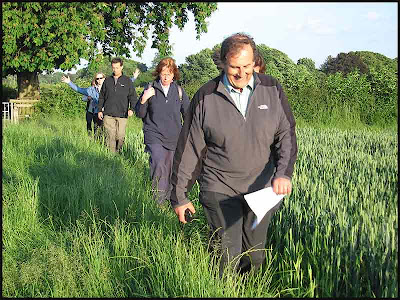 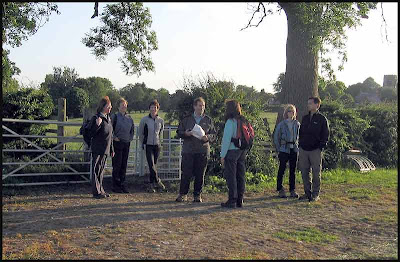 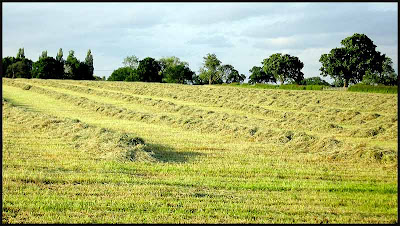 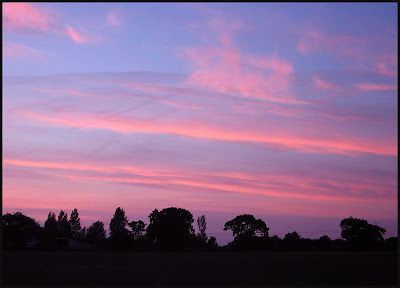 Thank you, Andrew, for your sterling efforts and your unfailing attention to the map.
Posted by Phreerunner at 23:25 No comments: 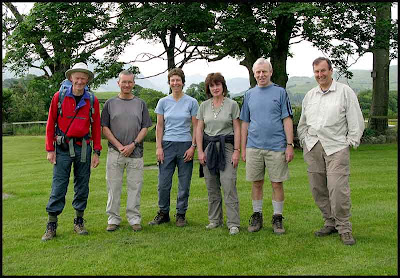 This page summarises our Lake District backpacking trip in 2008.

Our web page, giving full details of the actual route, and some additional panoramic images, is here.

The trip was 'blogged' as we went along, with numerous additional images added later.

The entire blog can be viewed here. You will need to click on 'older posts' and go to the bottom of the page to start at the beginning, or you can select individual days from the index below:

If you try this route you will realise that it can be varied considerably, depending upon the ambitions of the party.

I am happy to answer any questions or queries anyone may have.
Posted by Phreerunner at 10:52 2 comments: 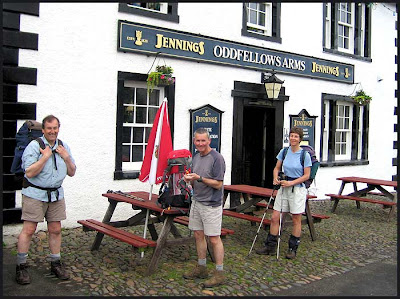 Distance - 16 km
Ascent - 160 metres
Time - 5 hours 15 mins including 1 hour 30 mins stops
It turned out to be a quiet night in our bijou room at The Oddfellows Arms, apart from a very vociferous dawn chorus.

Tea was served by Notchy before 7.30, just as we were coming to life for this short final day to Dalston. Wow, tea served in bed at a B&B!

An adequate breakfast fuelled us for our stroll. Today only four of us would be finishing the walk, as Sue and David were travelling to Langdale to continue their holiday. They were not in a hurry. Their bus left at 10 am, but much scratching of heads was going on as to where to catch it. Apparently there is no bus stop in Caldbeck, and there are only buses to Keswick and beyond on Saturday mornings. There are in fact two buses, leaving in opposite directions, so no-one knew where to catch them from.
‘Everyone here has a car’ was the uniform response. 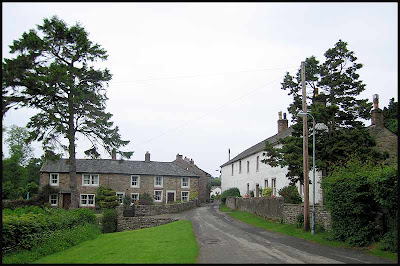 We left S&D with their conundrum as we wandered out of this idyllic village at 9 am, chatting as we went to a friendly local returning home from the newsagent.

There had been rain overnight and the paths in Parson’s Park (a wood) were slithery. The air was thick with the scent of garlic from lush beds of ramsons. 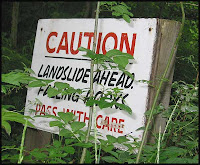 The Health and Safety men had been checking this wood, and a sign warned of a landslide that maybe will occur within the next millennium, but there is clearly no immediate risk – what a waste of effort!

We entered a field of freshly cropped grass. A Nissan Micra flew through the grass. Joy riders? No, it was just the farmer checking the dampness of the grass and wondering whether it could be gathered today.

At Sebergham someone had made a good stab at demolishing the old bridge over the River Caldew. Much of the parapet had been pushed into the river, but there was no sign of the offending vehicle.

Our final brew up of the trip was on a grassy bank by the river near Holm House. Sand martins and grey wagtails were active here. A heron patrolled the river nearby, and a buzzard circled threateningly in the distance. Small white flowers – not water lilies - graced the surface of the slow flowing river.

Today our route followed the course of the Cumbria Way – a long distance footpath coursing through the Lake District by taking the least line of resistance (ie not over the tops). 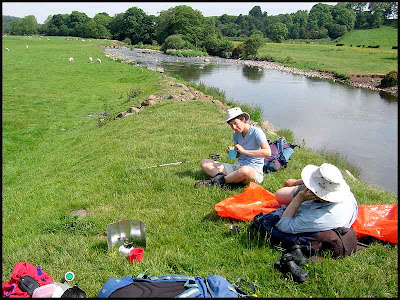 After our brew stop we encountered two chaps who had also been in the pub last night.
‘Are you walking the Cumbria Way?’ asked Sue.
‘Yes, are you?’ one of them replied.
‘No, our route coincides with the Cumbria Way for this last section, but we prefer to go over the tops, so that route is really a bit flat for us.’
‘Oh, perhaps we won’t do the Cumbria Way, then!’ He ended the conversation leaving us puzzled as to what they were actually doing… 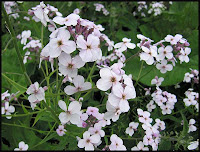 By the time we reached Rose Bridge, where the river banks were lined by dame's violet, the shrill cries of oyster catchers were being heard for the first time on this walk. Rose Castle looked impressive on the hillside above us.

A Redspearlands Footpath Group brochure sat lonely in a box fastened to a stile. We read about this local walking group and replaced the brochure before continuing along field paths.

A horse galloped past. 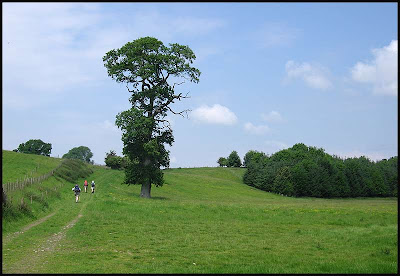 Then we entered the rhododendron strewn grounds of Hawksdale Hall, and passed the smart buildings of Lime House School.

Approaching Bridge End we noticed that we were on a ‘Reivers Off Road’ cycling route. We have encountered these routes a few times over the past couple of days.

The Bridge End Inn was bathed in sunshine and provided an excellent venue for our alfresco lunch, after which an easy path past an old mill (now owned by Cowens) led us to Dalston and the train back to Ravenglass on another sunny afternoon. 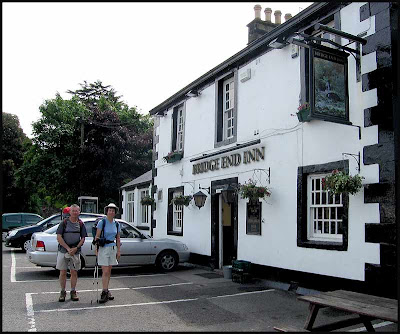 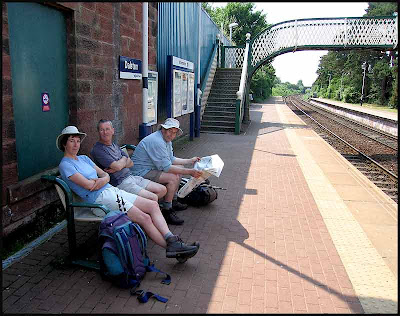 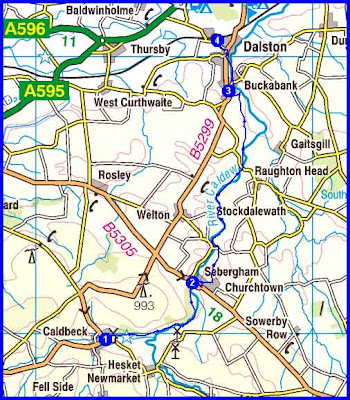 Back to Index
Posted by Phreerunner at 16:39 No comments: