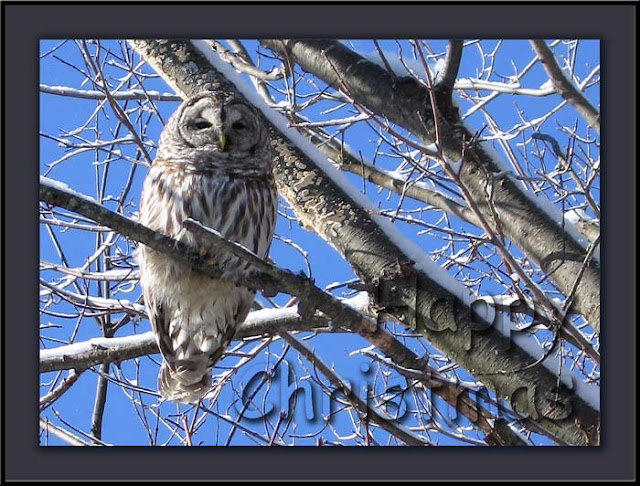 Happy Christmas to all the readers of this little indulgence. I have enjoyed writing the blog, even if (like now) it sometimes falls into arrears and is difficult to 'catch up'. I hope you haven't found it too tedious, and that some of you will find time to make an occasional comment. I do appreciate the murmurs of appreciation that appeared on a number of Christmas cards, and am encouraged to continue.
Have a lovely day; I hope your company was as good and your turkeys were as succulent as ours.
From all at Phreerunner Towers.
Posted by Phreerunner at 21:02 1 comment: 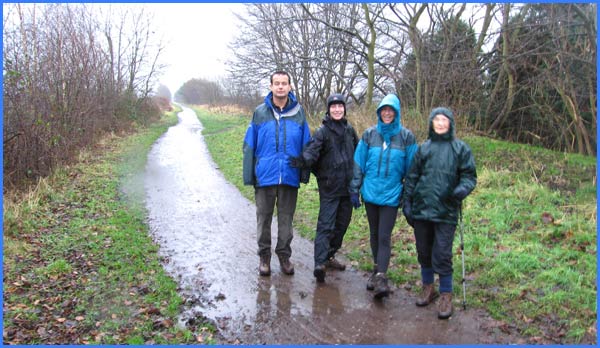 Another traditional ‘date for a walk’. For the second year, Richard and Jenny joined The Dishy Pharmacist and me, and my Mum, for a walk around Lymm. Last year’s walk has become the stuff of legend. I chose a ‘new’ route and when faced by a boggy field I decided to lead my victims a slightly easier way down a farm track. It was overcast, with poor light. The track had become deeply muddy but we could all see the glossy shiny concrete surface ahead. Pleased to be out of the mud, Mother (81) stepped onto the concrete only to find that it was actually ankle deep slurry. She splashed along for about 50 metres before escaping to higher ground. The rest of us had no option but to follow – we had already come through deep mud and weren’t inclined to either return that way or abandon Mother. Needless to say, our car – used for this trip – took some time to recover. The whiff in our kitchen where the footwear etc had been dealt with cast an odour over our Xmas menu, which appeared to come from an area of muck spreading.
So this year we returned to park outside the Church Hall, off Crouchley Lane. But today we were sensible and headed off in the mizzle to Lymm Dam, where a medley of Mallards and Coots clamoured for food. The light conditions are noticeable from my photos – all blurred. It’s a shame as the birds were so dense in the water that the picture could have made a pleasing patterned or textured image. 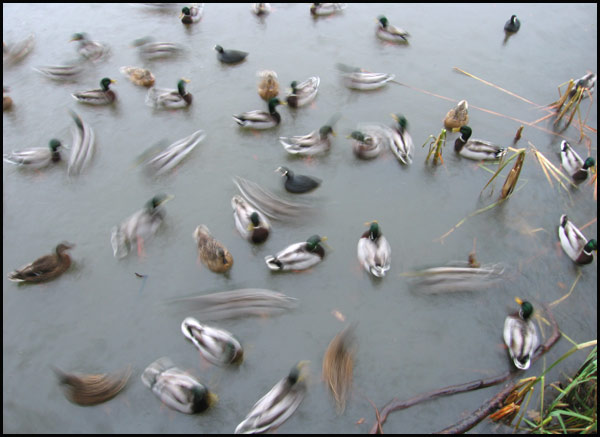 Ah well, here it is anyway.
Across the main road, a narrow pathway leads down steps then into the centre of the village. Quite safe, no slurry. From here the street leads to a bridge over the Bridgewater Canal, from where the towpath is easily accessed. We headed east, towards the unseen (and hardly heard) Thelwall Viaduct which provides a conduit for the M6 over The Manchester Ship Canal.
After about 1 km we turned away from the frozen canal, down a short ginnel to reach the disused course of the Warrington to Altrincham railway line, depicted in today’s postcard. This line was opened in 1853 and enjoyed a happy existence before being axed by Beeching in 1962. It continued to be used for freight up until 1985, when the prohibitive cost of maintaining a bridge over the Ship Canal led to its final closure.Happily, much of the route has been preserved as part of the 215 mile ‘multi-user’ Trans Pennine Trail from Southport to Hornsea. It would be a pretty boring walk, but is enjoyed by many as a cycle trail. I often encounter folk with panniers pedalling gently along, probably taking 3 to 4 days to cover the route. I may try it sometime. Anyway, we turned to the east and headed all of 3 km along the pleasantly slurry free track to the junction with the A6144 by the Farmer’s Arms. Passing the pub with some difficulty we turned left to shortly regain the canal towpath for a pleasant stroll back to Lymm centre and the ‘fleshpot’ known as Sexton’s Tea Rooms. The 8 km walk had provided much appreciated fresh (if rather dull) air before the onset of the annual gluttony, thankfully not tainted this year by anything ‘slurry’. 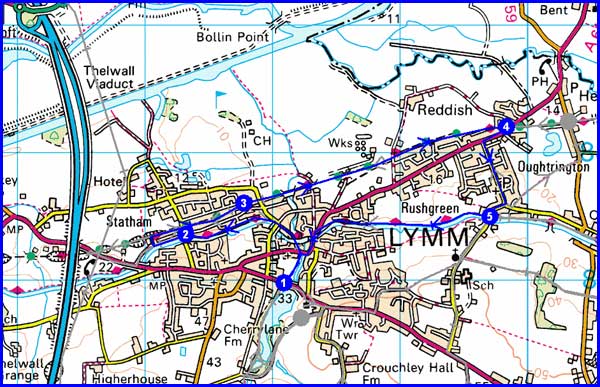 Going through old photos (it's now 26/11/2022), I found a brief diary entry in Volume 58, and several more photos from around Lymm in the damp weather: 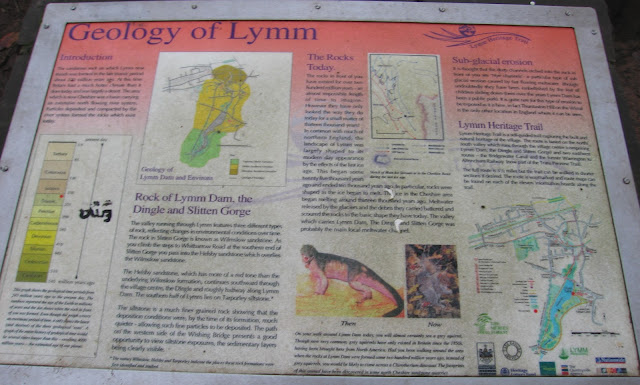 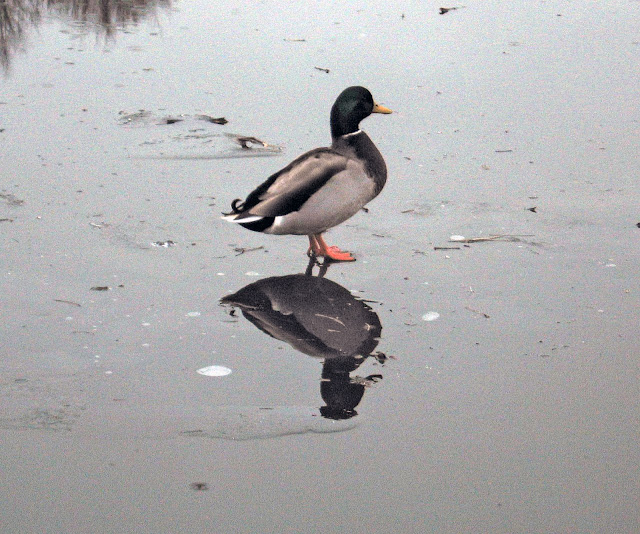 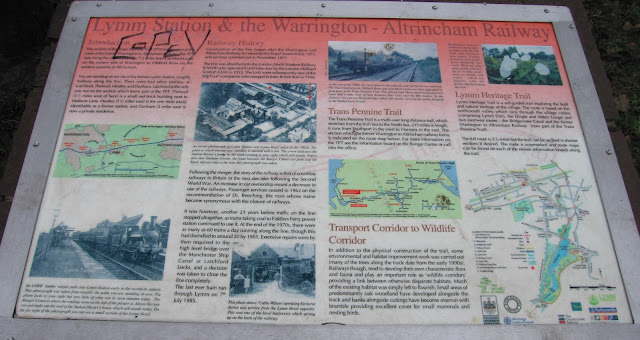 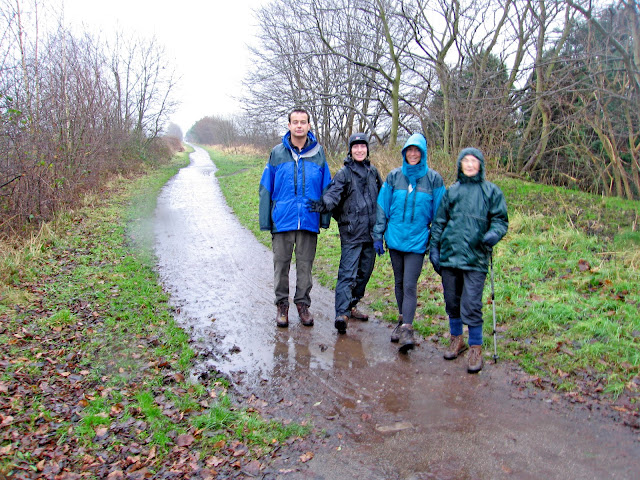 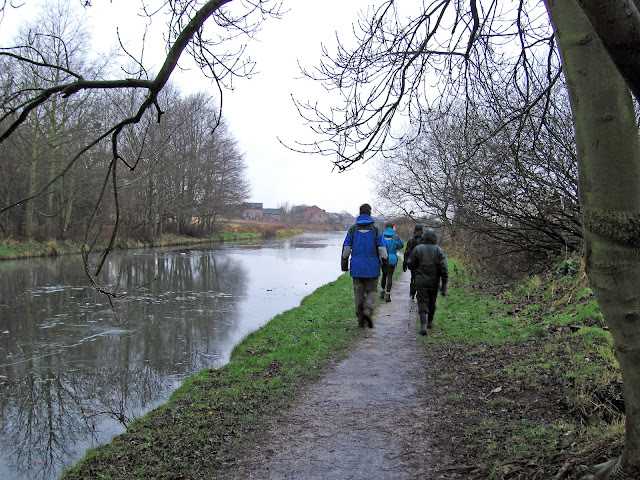 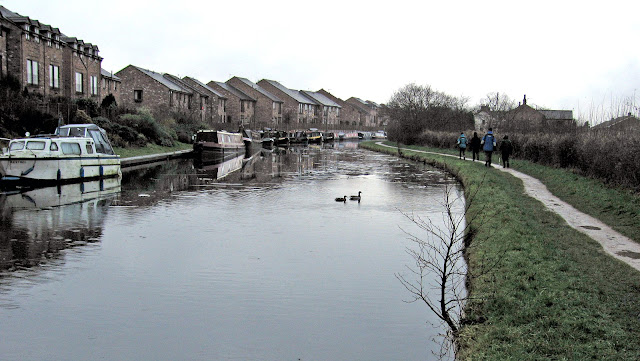 Posted by Phreerunner at 21:01 No comments: 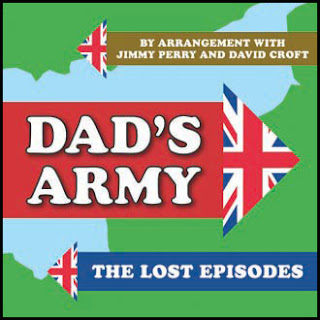 Some will question whether this was Culture or 'culture?'. Anyway, we all enjoyed Dad's Army at the Lowry Theatre, followed by the Hallé Christmas Carol Concert at the Bridgewater Hall, which roused me a little as I had a very quiet and peaceful chair at the Lowry and missed a lot of the first half!
More to come on this...
(Some time later)
Dad’s Army, as indicated above, failed to hold my attention for a while, but I did enjoy the second half, especially the familiar U-Boat crew classic.
In the first of the lost episodes, which have only survived in the form of scripts, the platoon try to ensure that Pte Walker is not drafted into the war by giving him flat feet. Pte Walker (with a look-alike of the original actor performing the role), who supplied the Home Guard with contraband whisky and cigarettes, is made to jump repeatedly from a ladder into a bucket of water to scupper his medical test in the episode, The Loneliness of the Long Distance Walker.
In the second episode, entitled A Stripe for Fraser, Pte Fraser turns power-crazed after being given a promotion.
The stage show finished with the Deadly Attachment episode in which a German U-Boat captain is captured by the platoon. Captain Mainwaring shouts his famous "Don't tell him, Pike" line when the German officer is attempting to discover the identity of the platoon.
So, worth a visit if it comes your way…Philip Radcliffe’s following review from the Manchester Evening News is a pretty accurate résumé in my opinion.

Dad's Army @ The Lowry
Philip Radcliffe
IT’S a strange déjà vu experience watching old TV favourites, dead and gone, represented live on stage. Clearly, old soldiers never die, they just get re-cast to come back and haunt us.
It says much for scriptwriters Jimmy Perry and David Croft, creators of one of the nation’s favourite sitcoms for a decade in their affectionate send-up of the war-time bungling by the Walmington-on-Sea Home Guard, that it is still richly entertaining 40 years on. Producer Ed O’Driscoll deserves credit for risking it. He and director James Robert Carson are entirely faithful to the original, not least in the brilliant lookalike casting. Inevitably, there is only an approximation to the likes of the great Arthur Lowe and John Le Mesurier and the rest – like an old master, a true original can only be copied - but it works a treat.
At first, you have a double take, watching the actors on stage whilst seeing in your mind’s eye the original inspired cast. But, gradually, you just become absorbed by the innocent pleasure. And the fun of familiarity brings extra delight – the established relationships, the well-worn catchphrases and the running gags.
The 15-strong cast, led by Colin Starkey as Mainwaring, David Warwick as Sgt Wilson, Richard Tate as Jones and Kern Falconer as Frazier, are a joy.
The show also does a service to our cultural history. Called Dad’s Army: The Lost Episodes, it restores four episodes first shown in 1969, including the captured U-Boat crew classic, not kept for posterity.

So the seven of us who went along were all in a good mood as we topped up with pizza, before five of us headed into town for a second dose of ‘culture?’ for the day. The Hallé orchestra and choir donned their usual Christmas finery and entertained us with their traditional mix of Christmas music and audience participation. This most enjoyable couple of hours was enhanced by a chance meeting with Linda and Clive, who we hadn’t seen for some time.
Posted by Phreerunner at 20:54 No comments: 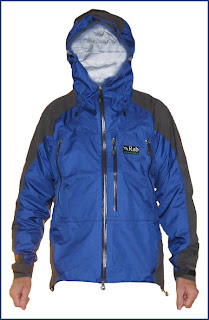 Yes, the postman came up trumps today, with this excellent pressy from The Dishy Pharmacist (aka Nallo Lady). Obviously, I couldn't open the parcel until Christmas Day, so the blogs have unfortunately backed up a little. In theory it's a holiday, with lots of spare time. In practice time spent on the computer is a rare commodity. I'll resume later...
(Some time later) The parcel has been opened and the garment fits. It’s very rare that I acquire clothing without trying it on, but I took the risk with this, on the basis of my good experiences to date of RAB kit (albeit these are my first RAB waterproofs) and the good price offered by Tower Ridge. I was tempted by the Montane Super-Fly Jacket offered by Bob and Rose at backpackinglight.co.uk, but the RAB jacket is 90 gm lighter and seems to have a similar spec, so there we go. Even then, it’s 100gm heavier than my old Berghaus Paclite smock, but I’m hoping that the new jacket, combined with a Vapour Rise (RAB, again) smock will work for winter conditions in which I’ve never used the Paclite. My existing (heavy) winter waterproofs are all worn out. So it’s a jacket for all seasons, as recommended by 'ptc' (Peter Macfarlane) in Trail magazine. Please note, it’s ptc and RAB in whom I’m placing my trust, NOT the sad (sic) mag.
I’ll report on performance in due course, but I’m saving this new jacket for severe winter days (none yet this winter) and multi-day trips.
Postscript
As at April 2008 the jacket has worked superbly, as planned. It has withstood downpours in New Zealand and winter days on Scottish Munros. But it's still fairly new, so time will tell as to its enduring qualities.
Posted by Phreerunner at 20:49 No comments: