Thursday 21 December 2017 – A Stroll from Timperley 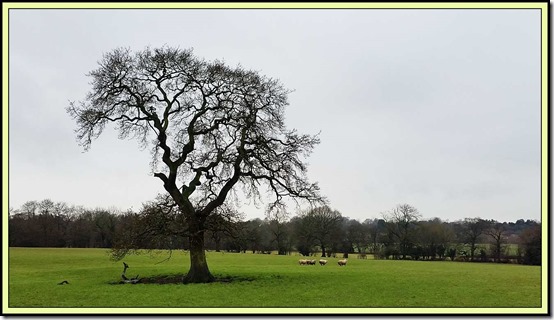 It was a dull day, and perhaps a dull route, for this week’s morning stroll, which I decided to start from Timperley Bridge to avoid having to drive anywhere.

My plan was to follow the ‘Altrincham Circular’ – a 27 km walk devised in the late 1980s – from Timperley Bridge to Roaring Gate Lane, then head across the fields to Altrincham.

From the Metro station at Timperley a gate leads to a canal side path on the opposite side to the well surfaced towpath. A little slithery here, but nothing to worry about. 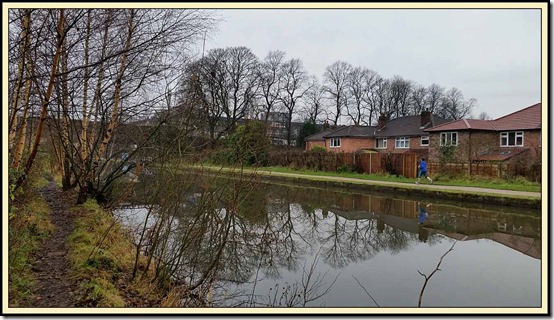 The path soon reaches a footbridge over the railway. 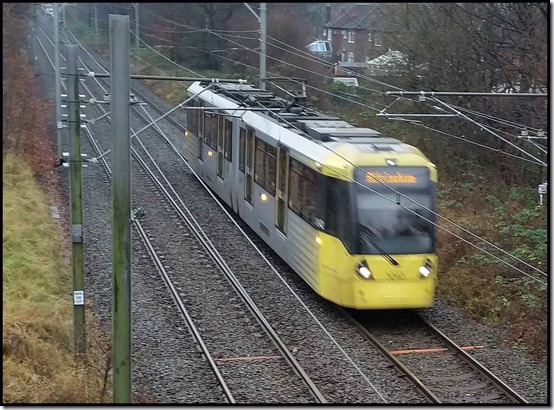 From here, a stroll across some playing fields leads to a footbridge over Baguley Brook. Turning left into Woodhouse Lane East, then right beyond the ‘Sylvan’ public house, you enter Milton Drive, then Sylvan Avenue. There used to be a ginnel to Burton Avenue between house numbers166 and 168, but that has now been blocked and you need to turn right then left to reach Burton Avenue, at the end of which a ginnel leads straight on to Rossett Avenue.

Continuing down Rossett Avenue to number 75, take an unmade road to the left, into Crofton Avenue. Cross over and in a few metres you reach Heyes Lane. There used to be a walkable path into Oakdene Road here. That in turn led to a nice ginnel called the ‘Boggart’, but sadly a locked gate now bars the way to the Boggart despite efforts over the years to keep this footpath open against the wishes of the residents whose back gardens were passed. The obvious route nowadays is to cross over Heyes Lane and take Beech Avenue, which leads to the recreation ground. Keeping to the right of the playing fields, a cinder track leading to Stelfox Avenue is eventually reached.

A left turn down Stockport Road brings you to the Brooklands roundabout. Cross over Brooklands Road then Altrincham Road to reach the relative calm of Hale Road, the start of Brooks Drive. You know you’re in the right place when, after just a few metres, you reach the bridge shown below. The railway line linking Altrincham with Stockport lies below. Baguley Station is nearby, but that closed in 1964 and plans to reopen it elsewhere in Baguley to provide a tram/train link appear to have come to nothing. 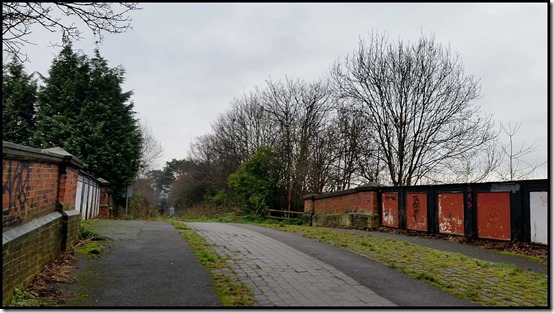 This marks the start of Brooks Drive, which the Altrincham Circular walk follows all the way to Hale Road, over 4 km away. It’s mainly a recently renovated walking/cycling path, but it’s one of the oldest thoroughfares in the area, dating from the 1860’s and built by Samuel Brooks, a mill owner and banker, and his son. An existing network of roads was used to link the new thoroughfare, which over time became known as Brooks’s road, now Brooks Drive. 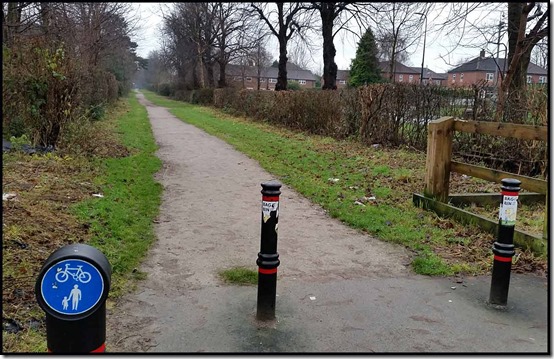 After 2 km of pleasant walking, during which I met an old friend with whom to natter for a while, Roaring Gate Lane is reached. This taxi route to Manchester Airport isn’t pleasant to walk along, so after a couple of hundred metres both the Altrincham Circular and my route for the day take a footpath to the right, beyond Chapel House Farm. After a few metres, this is the scene that greets you at this time of year. 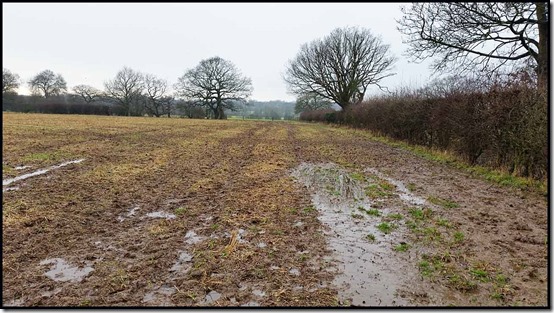 A muddy splodge takes you to the hedge at the end of the field, where a left turn, and soon a stile that puts the hedge on your right, takes you to a footbridge, a short while after which you emerge onto Buttery House Lane.

From here, the Altrincham Circular route turns left and soon rejoins Brooks Drive for an easy walk to Hale Road. Whereas I turned right along the lane and soon found myself in the deceptively grassy field pictured at the head of this posting. The grassy appearance belies a few inches of waterlogged earth. I was glad I’d worn waterproof socks with the old trail shoes. This muddy gateway near Well Green was particularly noxious. 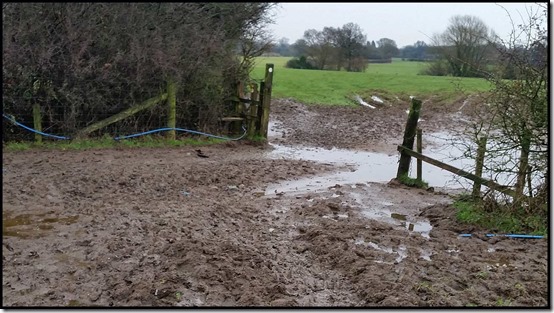 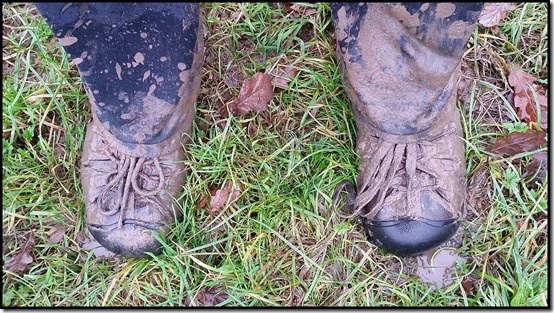 After a couple more fields, the comfort of Altrincham’s suburbia, in the form of Ash Lane, was reached. A right turn took me up the road to this typically tight ginnel, through to Wellfield Lane. 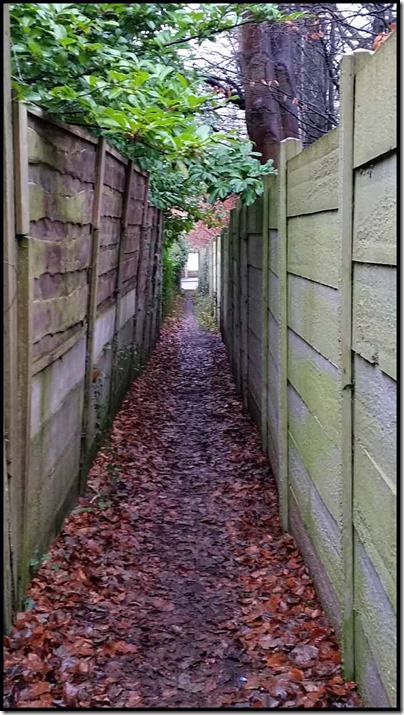 A short way up Wellfield Lane, a signed footpath left leads through more soft ground to reach Thorley Lane. Crossing over the busy lane, another path leads around a secondary school, eventually reaching Altrincham Golf Course. A marked (just about) path leads across the course towards Timperley Brook, which is then followed to King George V Pool, where a colony of coots mingles with the swans and mallards and moorhens, etc. 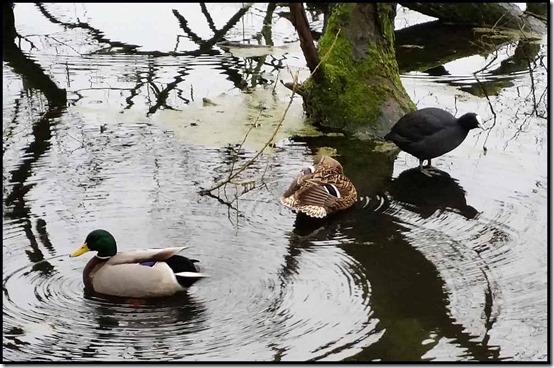 You can finish the walk in a number of ways. I continued beside the brook to cross Woodlands Road at (another) Timperley Bridge and head down Woodlands Parkway and Navigation Road to the tram station that enabled me to scoot down to Sale for an emergency purchase from Daz, the fishmonger.

Here’s the 12 km route. It took me a couple of hours, but you may prefer a more leisurely pace. 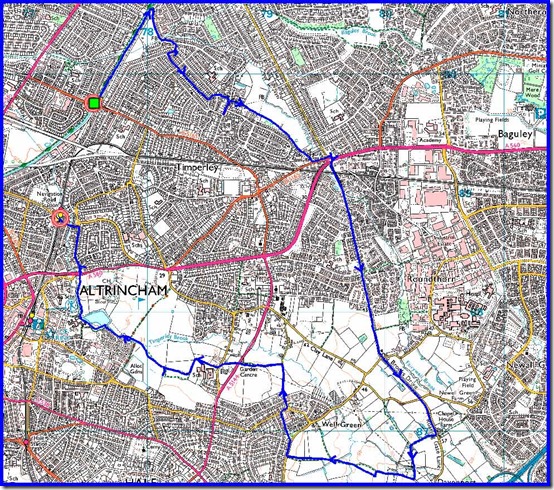 I challenge my readers from Timperley to follow this route and have fun in the mud. I’m up for it again, but only after a hard frost! 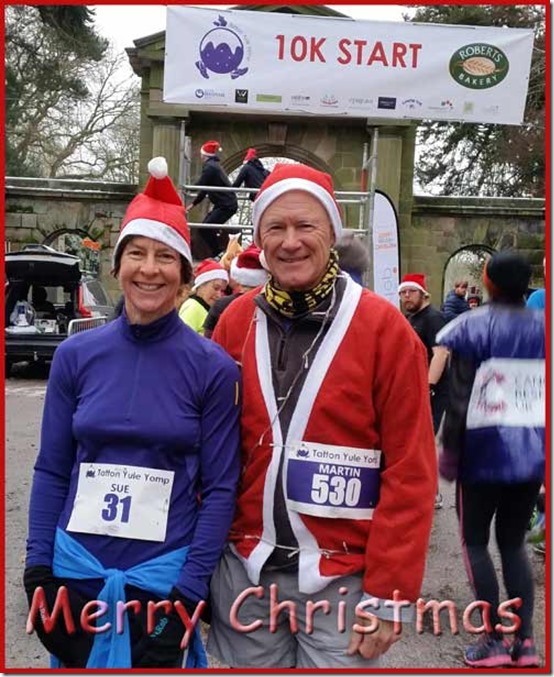 We wish everyone a very Merry Christmas and a happy and fulfilling New Year.

[Christmas Festivities have taken precedence over catching up with a backlog of postings. Normal service will be resumed in due course.]