On a day when heavy rain was forecast, I wasn’t expecting any company on this walk. However, Paul S dutifully turned up along with a rain inhibitor concealed somewhere on his body.

So we set out from the Visitor Centre (closed) car park at Werneth Low, and after admiring the ‘All Conflicts’ War Memorial, pictured below, by the car park, we strolled up to the Cenotaph, from where there’s a fine view to the Pennine moors (above). 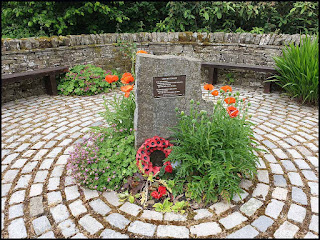 Here’s the view in the rough direction of Saddleworth Moor and Black Hill, all rather sombre today. 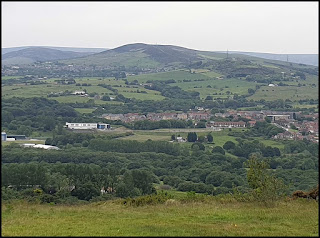 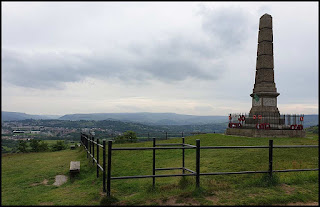 I was busy helping Mike and Sarah move house yesterday, so they should always remember the date of that move.

After a meander in the wrong direction past some gregarious goldfinches we returned to the planned route, which happened to be the Tameside Trail, and wandered along some narrow paths, gradually descending towards the Peak Forest Canal. On the way we passed large houses and we encountered narrow ginnels. 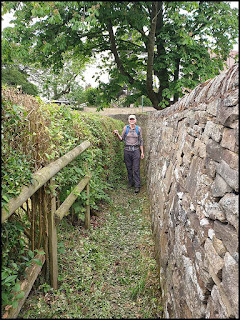 After crossing over the railway, we were faced with the windowless shell of Unity Mill, and Paul noticed some signs opposing a proposed development. This view may change… 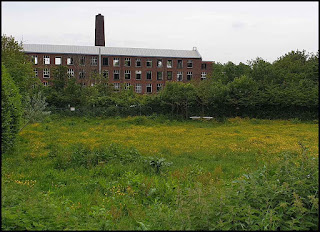 This new 250-home development in the curve of the canal north west of Woodley would see new housing built on open green space, along with the conversion of the derelict Unity Mill.The mill itself would become apartments, while a 'broad mix' of housing types - 30pc of it affordable - would be built on the fields to its south east, currently accessed from Gravel Bank Road.A 'visually attractive' environment would be ensured through good design and layout, it says, taking account of the nearby heritage landmarks.”

Directly behind the mill, the Peak Forest Canal passes serenely on its way to join the Macclesfield Canal at Marple and the Ashton Canal at Ashton. 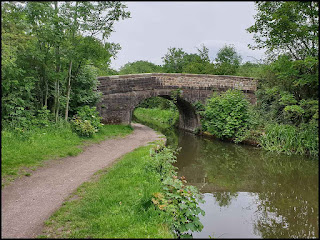 We enjoyed a short break here, watching the barges before leaving the canal at the bridge seen in the distance in the next picture. 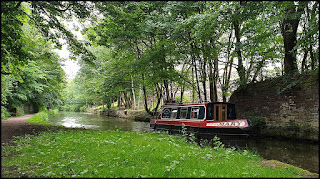 Now we enjoyed a section along a disused railway line utilised by the Trans Pennine Trail (TPT), which in this vicinity sports some impressive signposts. 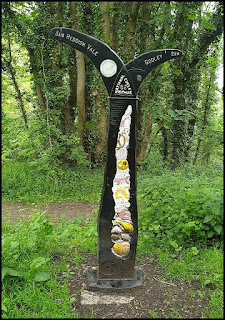 Near Godley we passed an impressive turntable site. How this scene must have changed over the past 100 years or so. 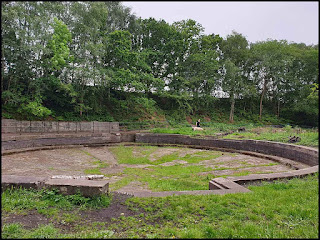 As we approached Godley the expected airborne moisture arrived despite Paul’s antidote, and the TPT, whilst neatly signposted, seemed to come to an abrupt halt at a metal fence on the wrong side of Godley Junction. I think you’d have to turn off before we did in order to follow the correct route.

Anyway, we muddled through and found the path past Brookfold Farm to be sufficiently unattractive that we chose the bridleway past Godley Green in preference to my planned route. Thus we made our way back up to the Cenotaph and down to the car park, where Keith and Carol appeared to have arrived nearly three hours late for the walk. How careless of them!*

Here’s the route we took – about 12 km with 250 metres of ascent, in rather less than three hours. It would be a bit less without the ‘meanders’. The red triangle shows the position of our tea break bench.


* Actually they were on their way to a weekend gathering at Torside. They practiced walking in the rain that was predicted for the weekend by setting off on a wet walk, whilst Paul and I made our way home.
Posted by Phreerunner at 22:26 No comments:

On a cloudy but fine evening when the expected rain failed to materialise, Sue and I joined 25 SWOG (Stockport Walking and Outdoors Group) walkers for this pleasant stroll around the familiar environs of Styal.

John was there in plenty of time to grab a pre walk drink at the Ship Inn (pictured above), whilst the rest of us accumulated outside the nearby Book Exchange. 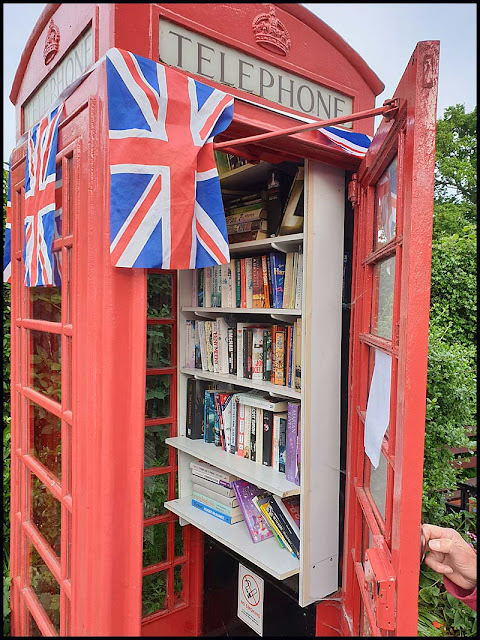 There’s an excellent Community Café – Earlam’s - which we visited on 28 January. If you are passing here during the opening hours, it’s a good watering hole. 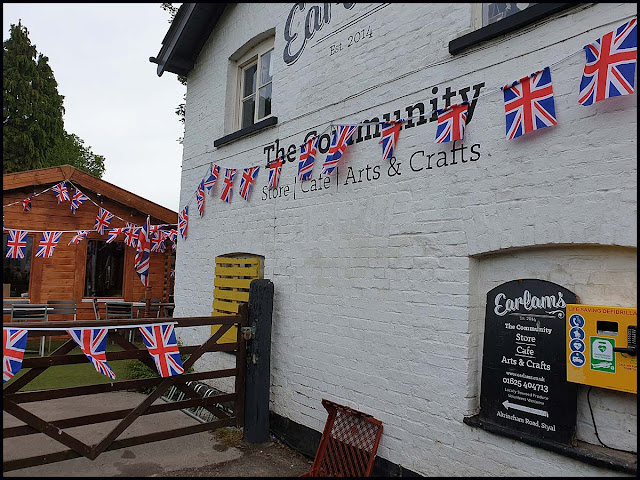 We departed promptly (as always) at 7.30, with Chris well camouflaged in a pretence that he wasn’t actually the leader of this walk. We made our way along the broad path to Quarry Bank and the River Bollin. 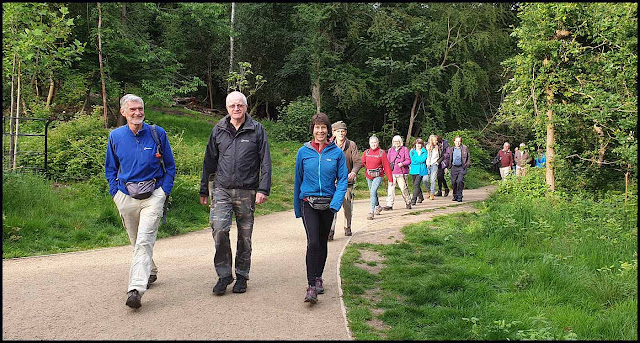 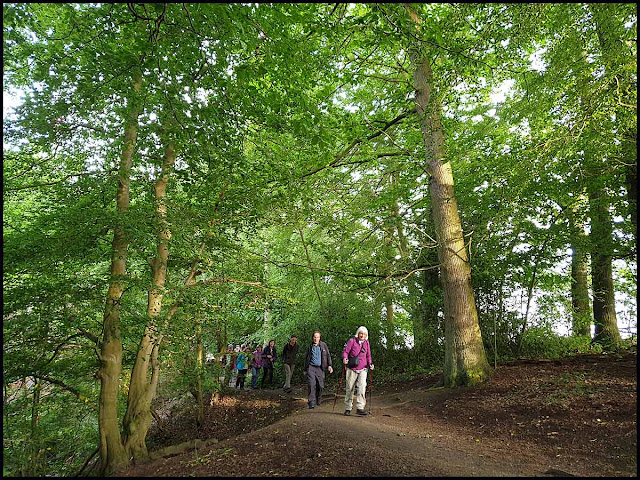 A lovely walk along the tree lined valley was interspersed with a few ups and downs, the last of which occurred after crossing Giants Castle Bridge, from where the next picture was taken. 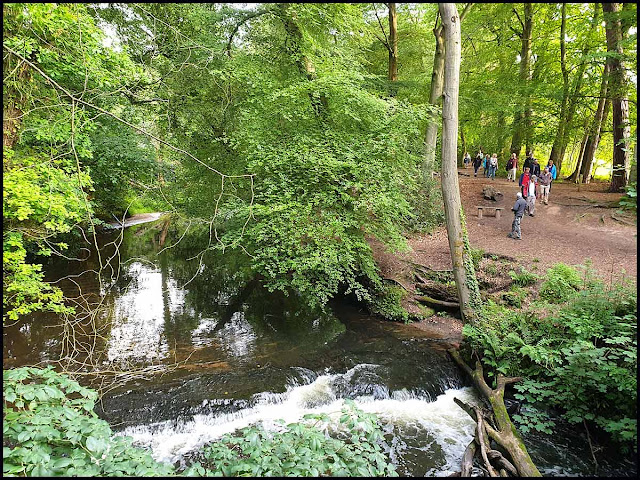 On the way to the main A538 road, we passed this relatively recently fallen tree. It wasn’t clear exactly where it had fallen from, as a well worn path crossed the area where we would have expected to find a hole from the uprooted monster. 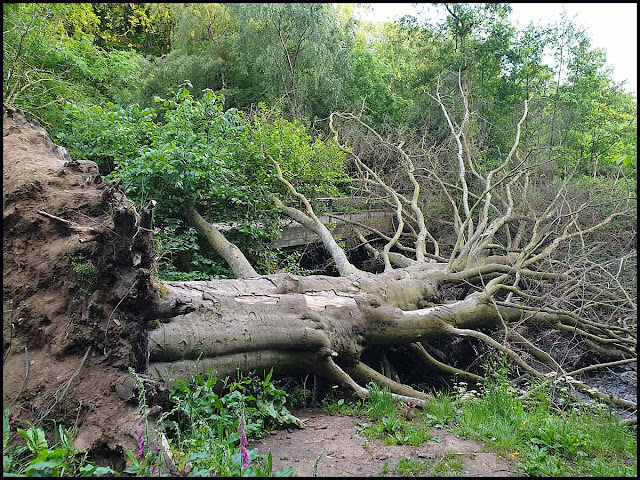 It’s always good to cover what should be familiar ground using someone else’s route. Whilst I normally walk alongside the A538 for a few metres and take field paths through Morley, Chris took a path directly across the main road, soon after which there’s a good footpath through the field shown below.

Chris’s route then re-joins the main road after walking up a quiet lane before Morley. Then its an easy stroll past the now defunct and dilapidated Bank House Farm, to Quarry Bank Mill.

Next to the mill is Quarry Bank House, where the owner, Samuel Greg, and his family lived in the early 19th century. 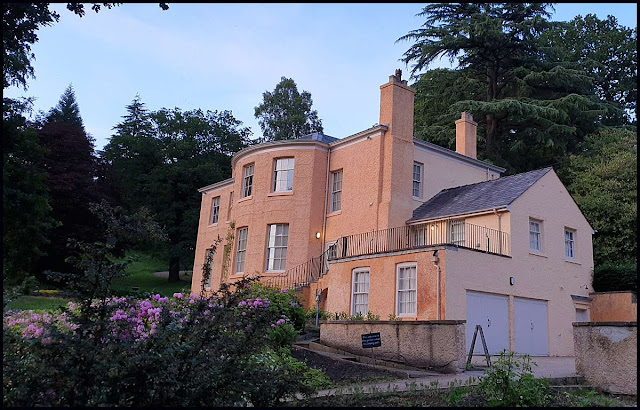 A few minutes beyond the mill, the village of Styal was reached, where most of the walkers offered the Ship Inn a good burst of custom.

Here’s the route – 7 km with about 100 metres ascent, taking us an hour and three quarters. 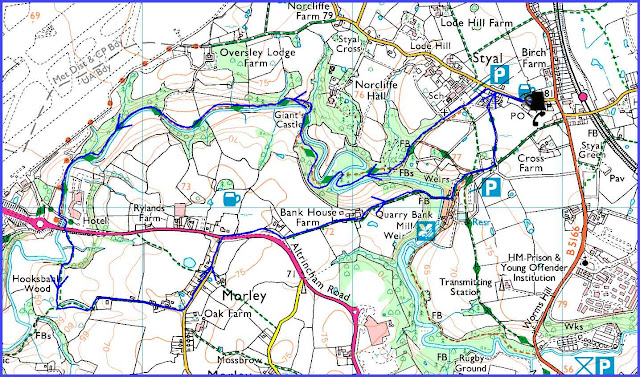 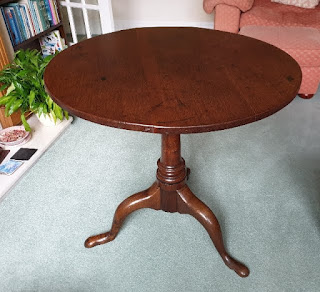 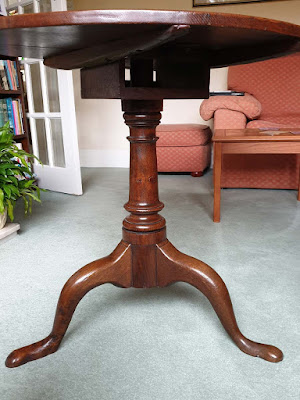 Mike (my son) and Sarah are moving house imminently. Mike has entrusted certain items to his mum and dad to ensure that they aren't damaged in the move.

One of those items, the folding table pictured, was in my bedroom when I lived in the family house. It was the surface upon which my homework was completed.

It followed me to Manchester when I became an Articled Clerk, and it was the surface on which much of my correspondence course training to be an accountant was carried out.

The table travelled easily in my 850cc Mini, and frequently accompanied me to clients for whom provision of facilities for the auditors was just one step too far. In Thatcher's Britain it was often adorned with a Tilley lamp in order for work to continue after the sun had set and the National Grid was turned off.

I remember it being coveted by the managing director of Empire Engineering Limited, a client based in Farnworth. A profitable little business making small valves and the like. Don Gray kept asking me how much I wanted for it, but his large house in Sale never benefited from the precious table.

For the past few years Mike has been the custodian due to space constraints in our house, and French polisher Paul refreshed the worn looking piece of furniture.

A little job for Dot, when she reads this, will be to jot down the history of this table before it reached my little bedroom at 17 Tidkin Lane, Guisborough.

Reply from Dot:
This table was in the verandah at Parkside in Rugeley, her parents' house; it was acquired by Dot's father (my grandfather) in the early 1900s.
Posted by Phreerunner at 08:10 1 comment: 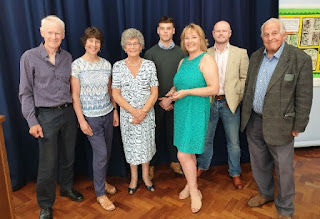 We are pictured at Sue's old junior school in Solihull, on the occasion of her mother's eightieth birthday. An excellent meal at Henley Golf Club (thankfully no golf was involved) followed.
Happy birthday Diana, and we hope you enjoy many more.
Posted by Phreerunner at 20:26 No comments: 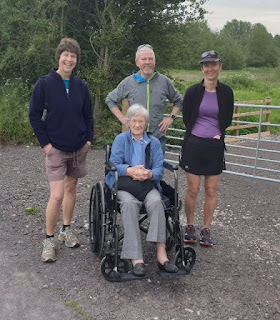 A visit to Dot enabled her to join us on this parkrun, which starts outside a Sainsbury store in Stafford. Sadly she was unable to run; if she had been able to, she would have set a record in the 90 to 94 age group.
Mick and Gayle, who were with us in Montrose last week, turned up again and Mick's ankle injury again prevented him from running. So he wheeled Dot to about 200 metres up the course, where she could observe proceedings from the comfort of her chair.
The pre run briefing at the start of the narrow course required a loud hailer and some large 'Quiet' signs in order to be effective. Despite it being only the 26th run here, there were a number of landmark runs taking place, including one lady who was completing the alphabet challenge - she had completed parkruns whose names begin with every letter of the alphabet. (I've done 15 on that basis.)
I'd decided not to push hard, and I was quite happy to run with Sue at 5 minutes per kilometre pace. That's what we did, reaching the turnaround point on this 'there and back' route in exactly 12 minutes and thirty seconds - precisely as planned.
Distracted by the greenery and birdsong, and many of the rest of the 263 participants coming the other way, it seems that I accidentally accelerated on the jog to the finish. Perhaps it was slightly downhill. Anyway, I kept looking back and Sue was still there. Soon we were whizzing past Dot and Mick, and accelerating to reach the click of the timekeeper. Gayle finished close behind us - a bit of a surprise as she is normally faster than Sue.
We regrouped, M & G shot off to a birthday party, and Sue, Dot and I toddled off to Sainsbury for post run coffees.
The results came through later in the morning. Sue and I really must have accelerated at the end as she got her first ever 70%+ age related result. Moreover, on this - her 148th parkrun - it seems that Sue managed her best ever parkrun time, 24 minutes 16 seconds, beating her previous best by all of three seconds.
Well done, Sue.
The photo was taken before the run, and the full results are here:
https://www.parkrun.org.uk/isabeltrail/results/weeklyresults/?runSeqNumber=26
Posted by Phreerunner at 16:47 No comments: