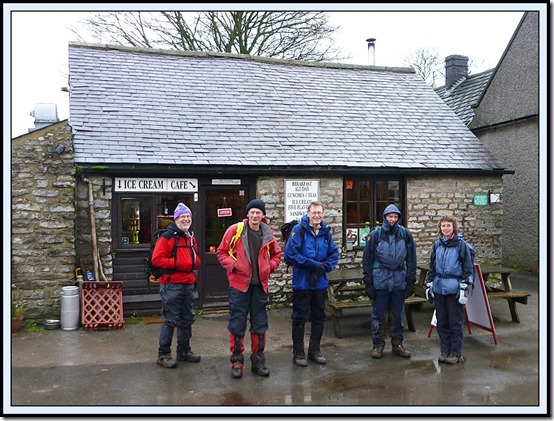 The Austrian Alpine Club has nearly 10,000 members, most of whom join the club solely in order to benefit from mountain rescue insurance and discounted accommodation costs in affiliated European mountain huts.

Some social and other events are however organised, and an email last week advertised this short walk from Over Haddon, courtesy of Chris Radcliffe. That was enticing for me as I could combine it with a trip to Great Longstone to deliver nine boxes of books for which we have no space, for the benefit of Book End Bookshop, a second hand book shop in Bakewell set up to support Bakewell and Eyam Community Transport.

A satisfactory turnout of nine veterans of the AAC got going soon after 10am on a surprisingly fine morning. We were soon studying the remains of the aqueduct at Mandale Lead Mine. 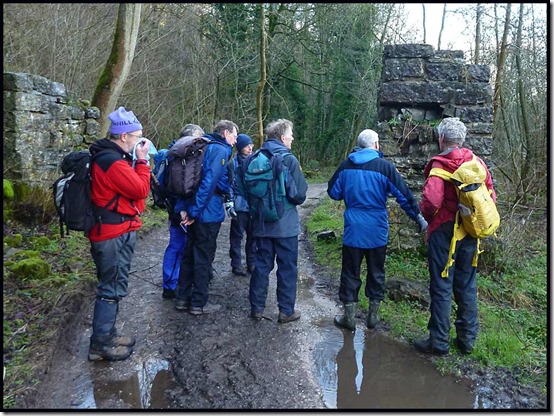 The aqueduct was constructed in 1840 to supply water to a wheel of 35 feet in diameter, used for pumping at the Lodge Shaft. The mine was abandoned in 1851 and has slowly deteriorated since then. Wooden troughs originally spanned the tops of the aqueduct’s piers, transferring water from a leat (open watercourse) on the south bank to one on the north bank of the River Lathkill.

Steps lead down to this water filled shaft on the south bank. 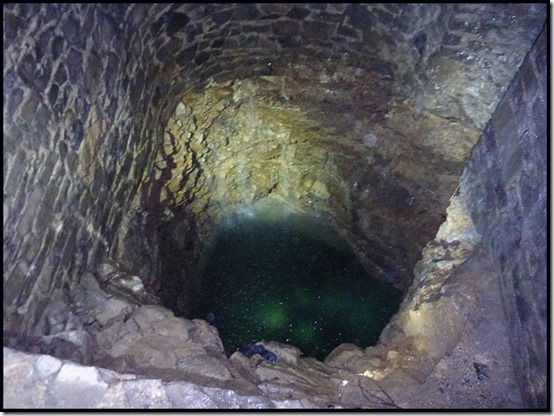 Heading west, a narrow strip of ‘land’ provided a path between the rushing river and a docile overflow area that has seen recent inundation.

I’ve an old guide book (one that narrowly evaded a trip to Book End Bookshop) that remarks that ‘unfortunately the river bed is sometimes dry to this point, which spoils the beauty of the spot’. 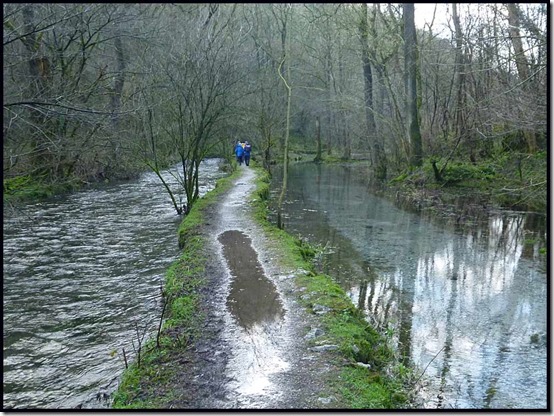 It’s a delightful stroll up the valley bottom towards Monyash. The sun even put in a brief appearance. 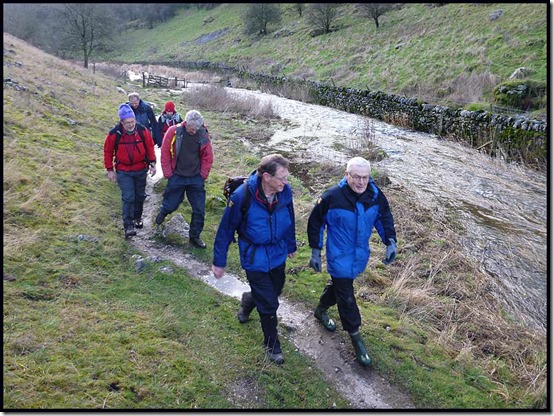 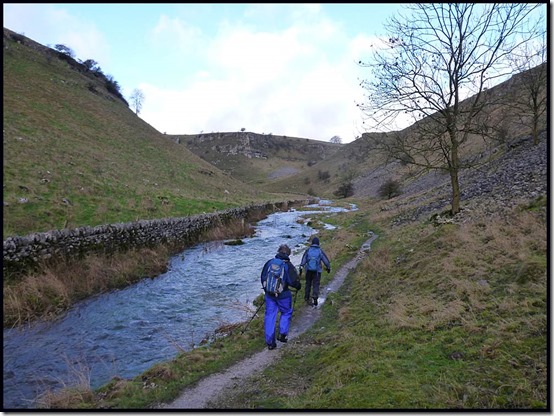 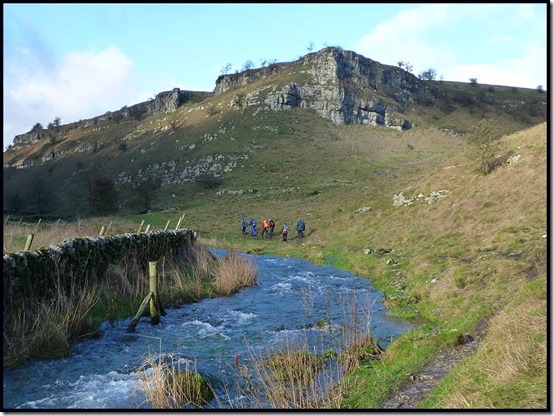 Water was gushing out of Lathkill Head Cave. Apparently this is a very low cave for some distance, before ‘solution cavities’ lead down to other levels. Those cavities quickly fill when it rains, so would be inundated just now after our recent rain. 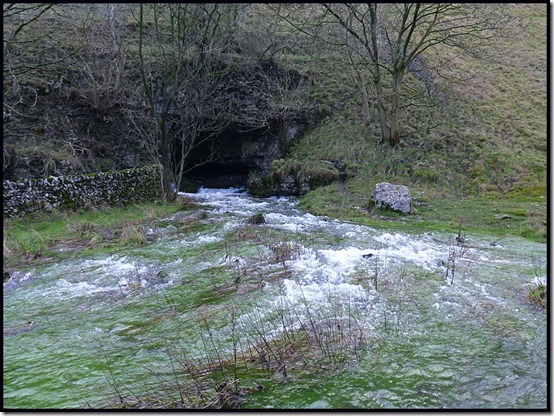 Whilst there has been wet weather in the Peak District, I think the area has avoided the severe deluges that have afflicted the Lake District and the South Pennines. The paths were wet but not overly boggy.

Here are the backmarkers approaching Monyash. 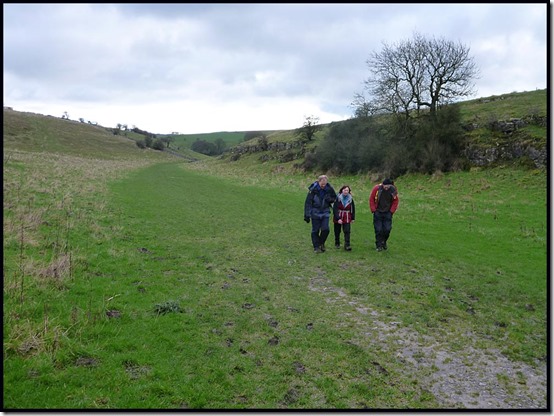 The header picture shows some of our group leaving the café at Monyash after a very pleasant lunch that we tucked in to whilst the day’s only rain cloud exhausted itself outside.

Our group, for the record, comprised two Gillians, two Rogers, Chris, David, Adrian, Derek and myself, though I may have to meet them all again in order to avoid a minor mix up!

Here they are, strolling along the Limestone Way, the chosen (and obvious) route back to Over Haddon. 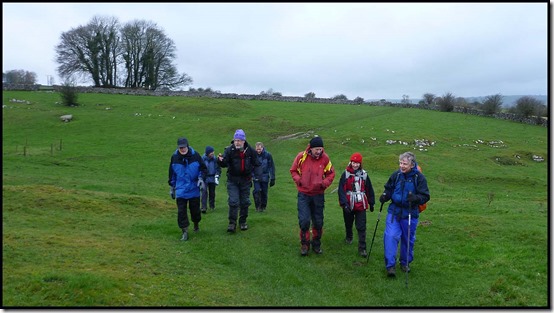 There’s a deep cleft to negotiated, Cales Dale, after passing the empty pigsties at One Ash Grange Farm. 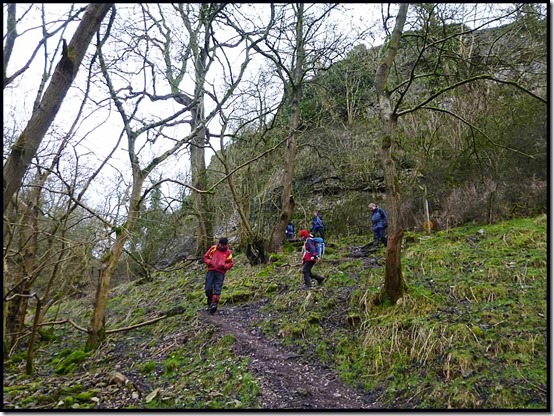 After some muddy fields, we dropped back to cross the River Lathkill near Over Haddon. 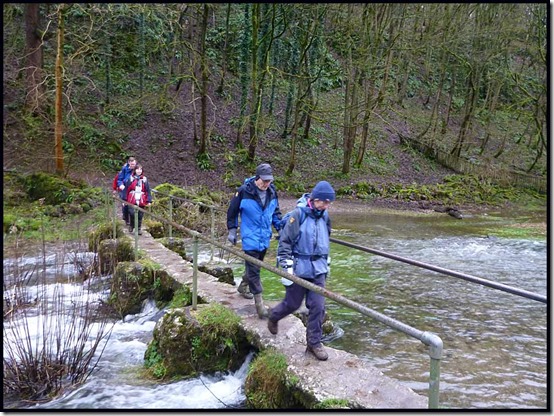 Instead of returning directly to our cars, we looped back to base by first continuing alongside the north bank of the river past a series of eleven weirs. 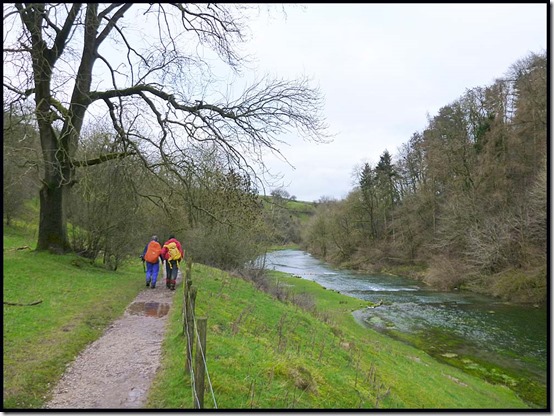 Our turning point was the medieval Conksbury Bridge, a packhorse bridge which seems to be withstanding the high level of water flowing under it at present. 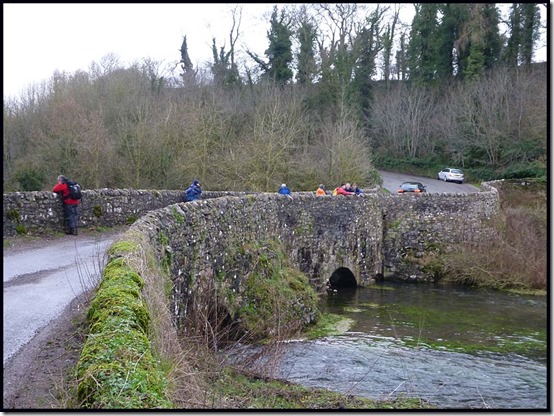 The sign says ‘PRIVATE NO ROAD’. That seems rather odd today, but in the summer this may be a very dry area with little or no water in the river. 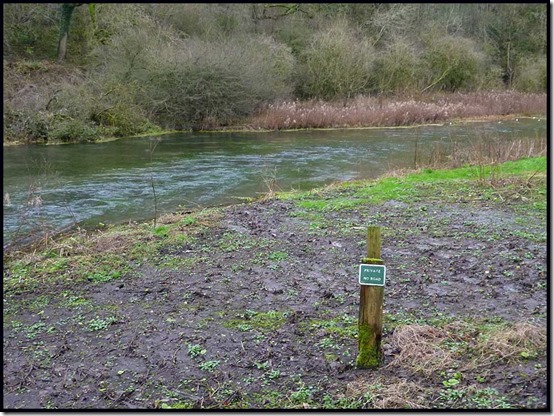 The high path back to Over Haddon affords good views down to the eleven weirs. 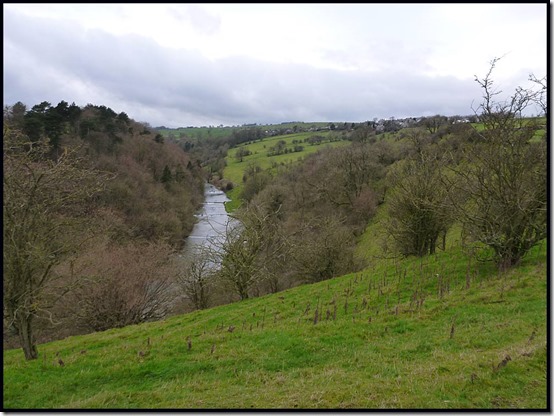 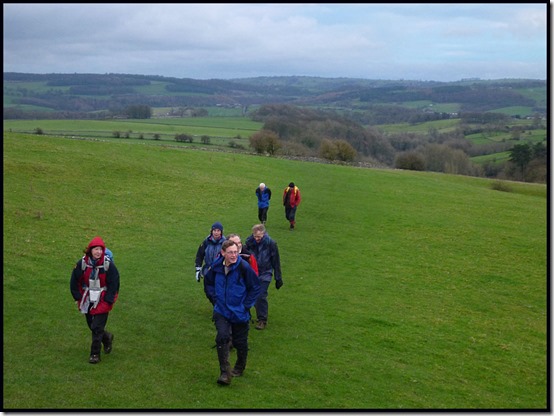 Other postings with information about the AAC can be found here.

Graffiti from the Southern Half (6)

See below (click to enlarge) for these two images to be viewed in context. So far as I can tell, although they are huge they can only be seen clearly from this high point above Valparaiso’s docks. 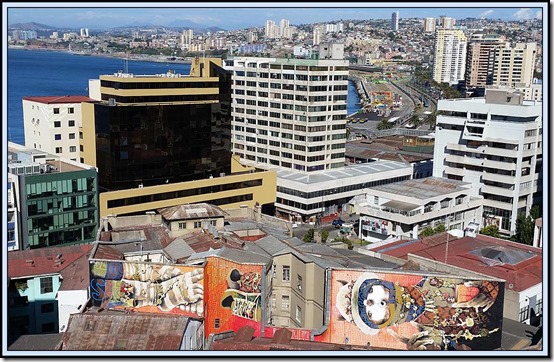 Graffiti from the Southern Half (5) 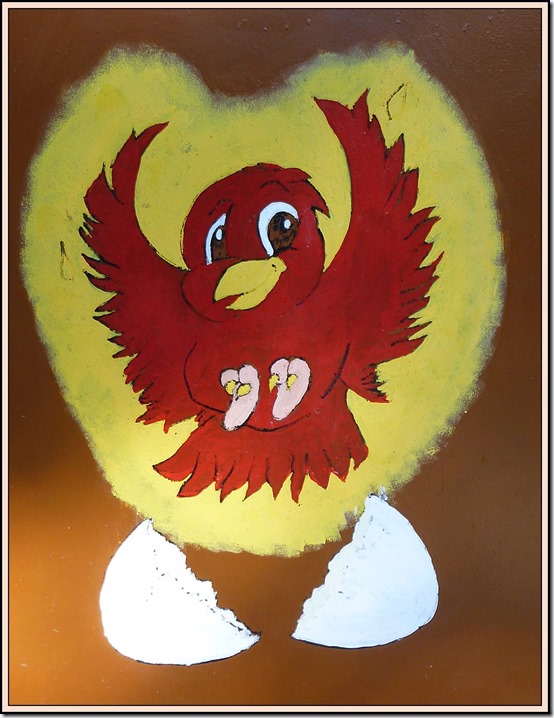 Posted by Phreerunner at 19:13 No comments:

Graffiti from the Southern Half (4) 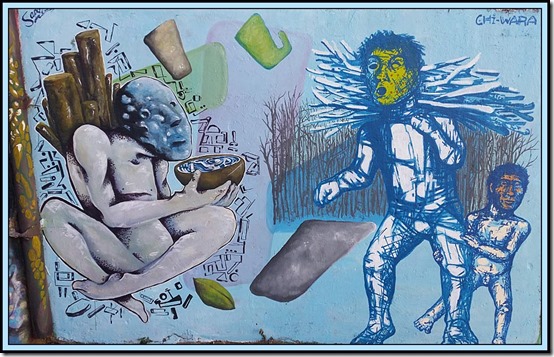 On the wall of a house. I’m sure it must have a deep meaning to somebody!

Graffiti from the Southern Half (3) 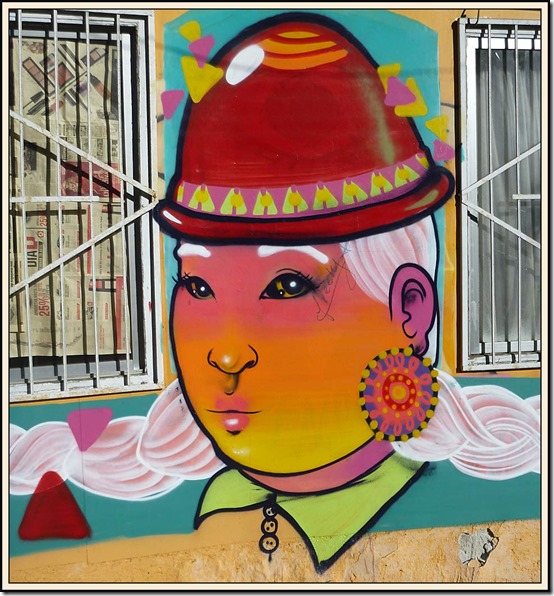 Here’s another image courtesy of a Valparaiso street artist. I’ll be posting more of these in the same vein, often with no description. I’ll try, as in this case (not very successful in this instance), to provide a second image in an effort to show the graffiti in the context of its background/building. 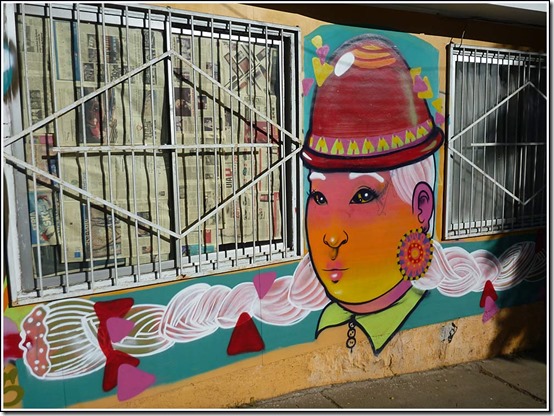 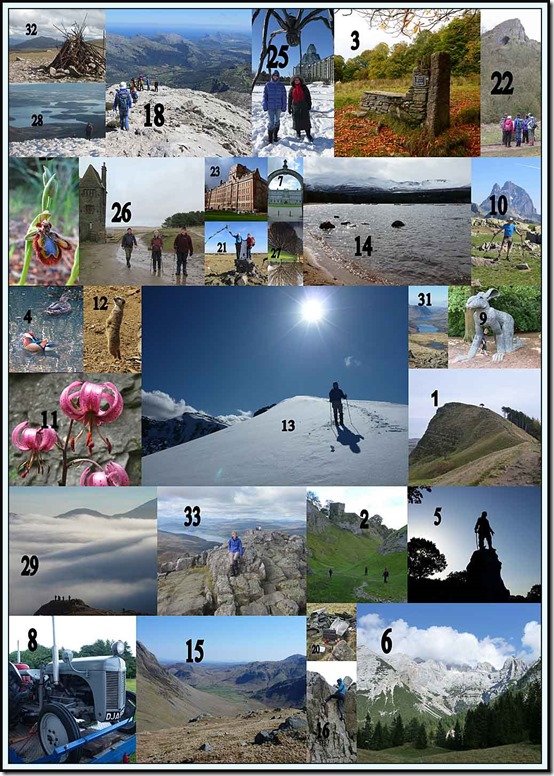 Those who attended our Christmas walk and lunch on 20 December may remember this. Others may like to see whether or not they can match the ‘Bah Humbug’ team’s tally of 21½ out of 30. Here are the questions.

A larger version of the image has been uploaded here. Click on the collage image and zoom…

If you email your answers to me at quiz@topwalks.com, I’ll let you know how you got on. Note that some of the other people attending the walk contributed some of the images.

Posted by Phreerunner at 09:57 No comments: