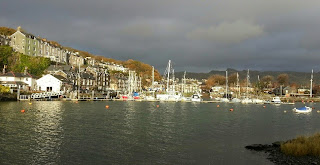 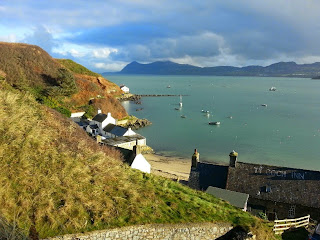 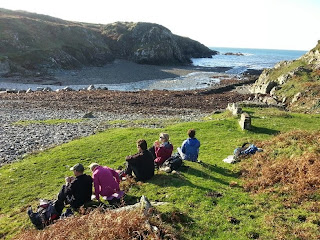 Now we are six. Richard and Jenny arrived last night.
Despite early sunshine (pictured top in Porthmadog harbour - the view from Number 55) which may have enticed us into Snowdonia, we stuck to our plan of a coastal walk on the Llyn Peninsula.
After leaving a car at Porth Towyn, the six of us started off towards the golf course from a convenient café in Morfa Nefyn.
Luckily, by the time we had started the heavy showers that had suddenly appeared had moved on to Snowdonia.
We soon reached Porth Dinllaen, with fine views to yesterday's hill - Garn Boduan. The view over Ty Goch Inn and the bay is shown above.
Elevenses on a bench overlooking the bay under a hot sun followed, then we spent ages strolling around the peninsula and beside the golf course.
Lunch (pictured) was taken beside a flock of starlings at Aber Geirch. Millions of flies above the Fucus serratus and Laminaria digitata were providing a fine feeding zone for these birds. Ken spent a while trying to identify purple sandpipers. They turned out to be Turnstones. Robins asserted their territorial rights and stonechats chattered nearby.
Shadows lengthened as the afternoon progressed and our progress was recorded in the shadows on the beach below. Oyster catchers flew past and Anglesey was clear on the northern horizon.
Curlews, lapwings and starlings gathered in huge groups towards dusk. Seals were spotted by Sue, Anne and Jenny - forty to fifty of them basking on the rocks.
Mud was encountered as we continued along the coast to admire a fine sunset from Porth Ysgaden.
I'd mistakenly gone a bit further than planned, and by the time we got to Towyn farm we'd covered about 15 km in quite a few hours.
All six then made it back to the second car and adjourned for one of Sue's Thai banquets at Number 55.
Another excellent day.
Posted by Phreerunner at 21:50 2 comments: 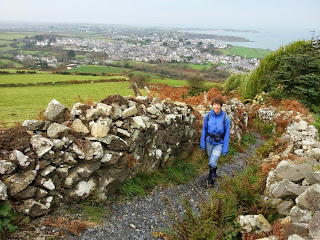 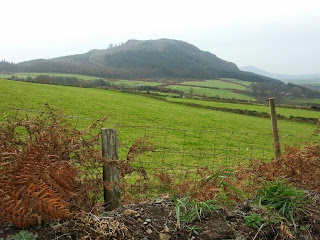 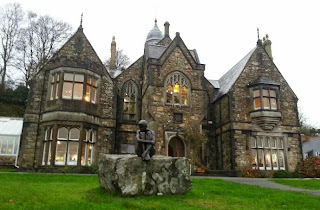 The day started fine, but forecast rain slowly encroached,  justifying our decision to stick to an easy morning walk.
So we drove to Nefyn for a 9 km stroll around and over the 279 metre summit of Garn Boduan.
Yesterday's brown butterflies were in short supply as we rose up an ancient walled lane (pictured- top) past rampant gorse bushes flanked by red campion, yarrow and trailing tormentil. Harebells and herb robert also lined the path, as views down to Nefyn and across to Garn Boduan (pictured - middle) became more expansive.
We circled Coed Mynydd Nefyn and at the top of the path a large gathering of partridge and pheasant awaited their imminent doom, as gunshots from Bodfuan Shoot crept ever closer.
Spots of rain didn't deter us from a tea and cake stop near the B4354, along which road a short section of this walk was forced to travel. Here we encountered the Shoot's unattended Landrover, with swag in the back (including an errant magpie) and a badly smashed windscreen.
Then it was up through forestry to Garn Boduan's rocky summit, with evidence of an Iron Age hill fort and traces of over 100 dwellings over 2000 years old poking out of the bell heather. Apparently between 100 and 400 people would have lived up here.
Lunch was taken at a point near the summit where I fell into a hole and summersaulted into a position from which I was disinclined to move.
Our descent on a little used route to some forestry workers with heavy machinery was in the company of snipe and woodcock. Blackbirds and lapwings were also seen hereabouts.
The rough route gave way to a woodland path back to Nefyn, with many different types of fungi on display,  including some Ramaria varieties poking out of the leaf litter.
The drizzle was setting in as persistent rain by the time we regained the car, so we passed the afternoon on a visit to Llanbedrog, in particular to the gallery (pictured - bottom) that started life in 1856 as Lady Love Jones Parry's dower house. In 1896 it became an art gallery and ballroom. A horse-drawn tramway was extended along the sandhills from Pwllheli to the hall's entrance. Until 1927, when the tramway closed, trips by tram to Llanbedrog beach and to the house for dances and afternoon teas, were popular with holidaymakers. Likewise, we enjoyed afternoon tea and cake in the restored hall, but much to Sue's disappointment we gave the dancing a miss.
Posted by Phreerunner at 17:49 No comments: 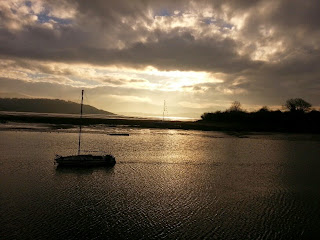 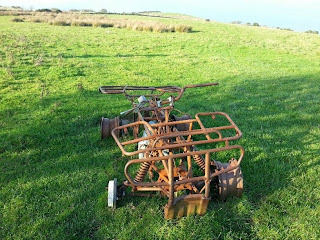 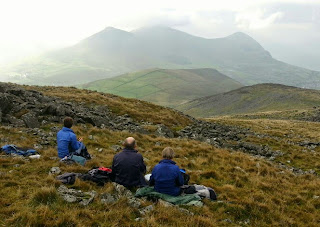 Happy Birthday Kate!
Last night we popped down to join Ken and Anne at 'Number 55' in Porthmadog.
After a fine South Afican bobotie and a deep sleep we awoke this morning tea and croissants.
Then, after admiring the view from our street (pictured - top), we embarked on a version of Walk 28 in David Berry's excellent little guide to walks on the Llyn peninsula.
Clynnog Fawr was reached despite the best efforts of the Welsh road system to foil us, and after dodging some filming outside the Y Beuno hotel, we were soon rising high above the coast road, on the coast path.
The weather was cloudy but warm. Benign. After a skeletal 'tractor' that AlanR will no doubt identify in seconds, an easy stream crossing,  elevenses and brownies, we turned coastwards (yes!) from the coast path to ascend the two Gyrns. Gyrn Ddu (at 522 metres our high point of the day) is well protected by rocks. Ken and Anne declined its invitation.
Lovely views in clearing conditions were enjoyed together below the summit boulders over which Sue and I had scampered. Lunchtime - pictured.
Then a short stroll to an unnamed summit led us back to the coast path, from which we were distracted by a gentle ascent to the 509 metre top of Bwlch Mawr, access to whose trig point was barred by a huge wall.
Views of the sun beaming down on the peninsula towards Bardsea Island were admired at length (a slideshow will follow) before we headed down to a ruined cottage and a stretch of quiet tarmac. There were immaculate views past a high mast to sunlit Snowdonia.
Robins and wrens vied for the noisiest bird award whikst a sparrowhawk circled menacingly above.
The path got boggy, and perhaps Ken did regret his decision not to wear gaiters. Dusk came and darkness was descending fast by the time we got back to Clynnog Fawr at 5 pm.
At about 16km with up to 800 metres ascent, taking 6.25 hours - this was a fine day out in lovely conditions.
Posted by Phreerunner at 22:22 3 comments: 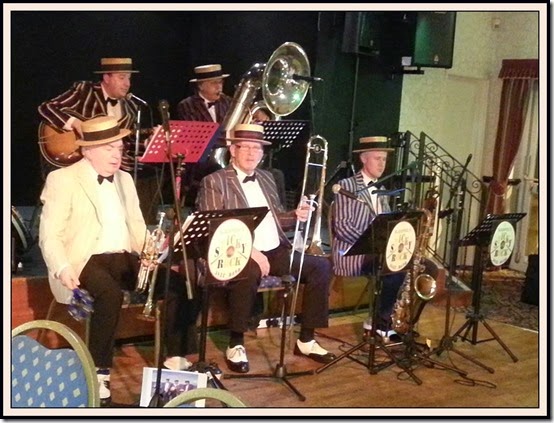 I suppose this is really just a plug for Eagley Jazz Club, whose members either enjoyed or were subjected to Blackpool’s Sticky Rock Jazz Band last night.

I’m not sure whether this fivesome have ever performed together before, or whether they will do again, but with Anthony Mason competing with Mike ‘Lovely’ Lovell for the role of ‘main man’, a distinctly ‘Formbyesque’ atmosphere prevailed.

Alongside banjo playing Mason on the back row, Colin Turner was hidden to most of the audience by his giant tuba, which seemed to me to cover for the absence of a double bass and any percussion. On the front row, Mike was flanked by either ‘in the flesh’ or clones of Andy Henderson and Willy Entwistle (or was that Pete Eddowes?). Judging by the confusion within the band as to who they all were, I suspect that they were clones.

It was a little ‘lighter’ than the usual trad jazz fare on offer here, but quite good fun if you could cope with Anthony’s nasal attempts at humour. In truth, the band were not bad at all, and they were able to comply with a request to play the Temperance Seven’s 1961 hit – ‘You’re Driving Me Crazy’ (I think!). In fact, several of them claimed to have played with the Temperance Seven, which I’ve noticed over the months is a badge of respect donned by many of the performers at this club.

It would be good to see some of you there sometime….

Posted by Phreerunner at 16:04 No comments: 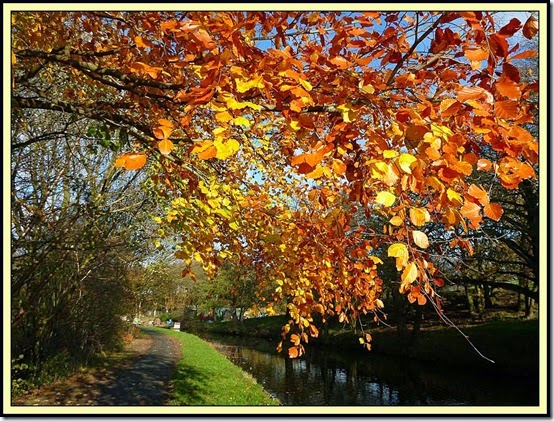 I haven’t seen too much of the autumn colours this year, but these golden beech leaves overhanging the Leeds & Liverpool Canal couldn’t fail to catch my eye today.