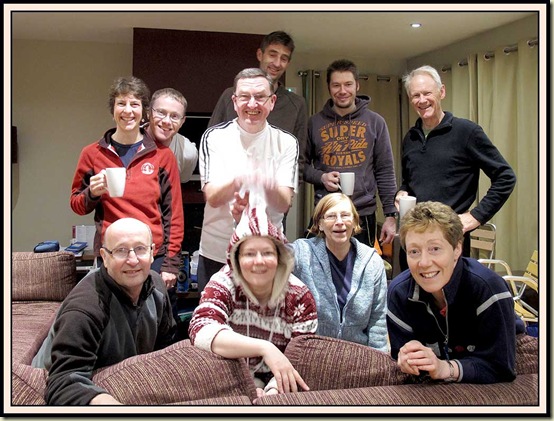 It was our annual day out at Center Parcs.

Thanks go to Robert and Lyn & Co for inviting us along to enjoy a somewhat active day from which my muscles have still not recovered.

It was great fun – a slideshow (for those who were there) is here, and a record of all our visits since 2007 is here. 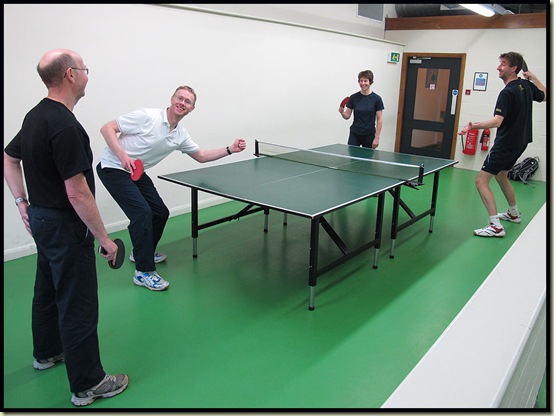 Sue still has the squash bruises; Roger’s knee still hurts; Stuart remains a poseur; Louise has taken to wearing a lion’s suit to work; Chris is still building submarines; Robert remains a disturbingly lanky 6’ 9” after the stretching exercises; Lyn is busy preparing next year’s shopping list; Jim is practicing his tennis serve; and Peg has ordered herself an American Pool table for Christmas. 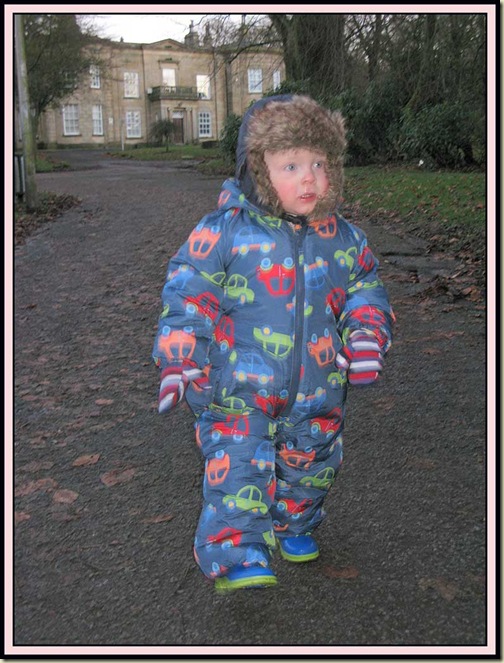 Sue took this picture of Jake a couple of weeks ago.  He’s in search of ducks… 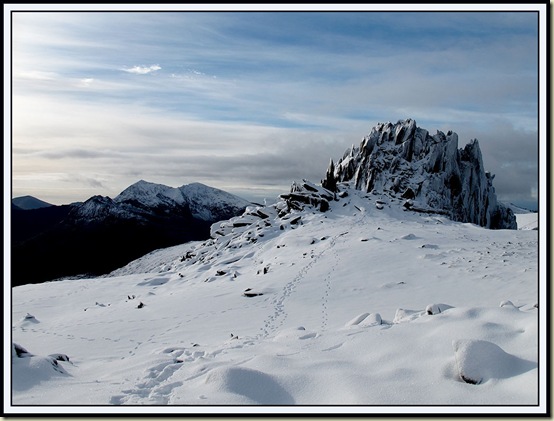 Is it really nearly five years since I did this walk?  It appears so, as I last recorded it on 1 January 2008.  Details of the route etc are given in that posting.  Since then I’ve been up Y Garn on one of Bill Birkett’s ‘Great British Ridge Walks’ – described here.

So it was a pleasure to be able to take advantage of a fine day after much rain.

There’s an annotated slideshow here, so I’ll be brief.

The kiosk at Ogwen has gone.  They are building a new ‘Ogwen Centre’, to be opened next summer.  Meanwhile, the toilets are still there, and the parking is free for the time being.

The warm rain in Manchester had fallen as snow above Llyn Idwal, so I enjoyed a day of glistening snow and glassy lakes.  Stupidly, I’d forgotten to pack my ice axe and crampons, so when I found myself unable to move backwards or forwards on a steep slope near the top of Y Garn, I was left with no option but to deploy the Yaktrax foot grips that lurk in my rucksack all winter.  One went on easily enough from the awkward stance, but the other one catapulted off down the icy slope.  At least it wasn’t me who slid down the slope, but this was a harsh reminder to don such footwear before it’s needed, not at the crux of a climb!

Several others were on the hill – a group of four climbers, a young lad who had lost his sunglasses, and a couple of chaps coming up from the south.

The firm snow on Y Garn contrasted starkly with the softness of the Glyders’ covering.  Here I bumped into a few more folk – everyone was chatty today and of the dozen I saw there was just one other pensioner, the rest being people who’d simply taken the day off to go for a walk.

There were excellent views of Snowdon (see above), and crampons weren’t really needed in the softer snow of the Glyders.  However, once I’d removed my remaining Yaktrax I kept slipping on the black ice that’s a feature of the descent below the snow line back to Ogwen Cottage.  No damage was done though, and I was home in time to cook tea after a most pleasurable day out, as you will gather from the slideshow images. 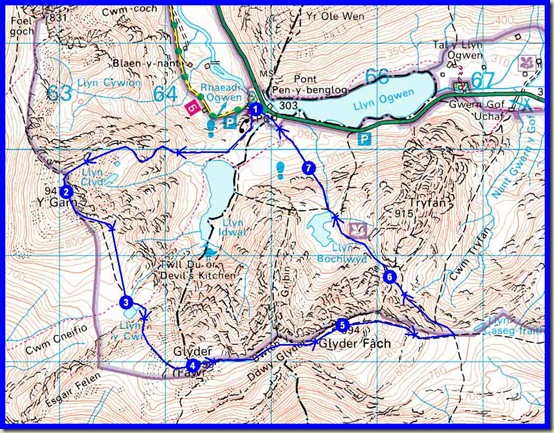 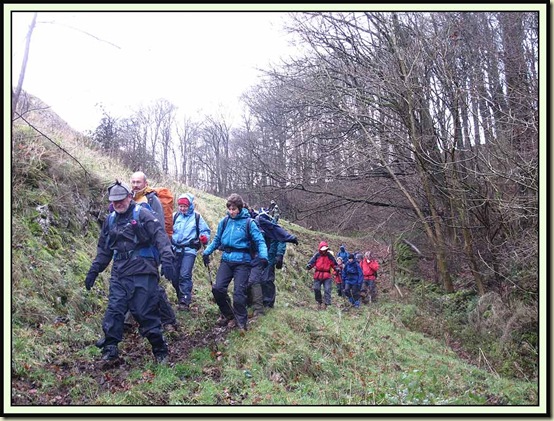 There are other excellent and more timely reports on this fun day out, so I’m just providing a brief overview here before moving back a couple of weeks to try to catch up with some overdue postings.

Gayle’s report, composed literally as the walk was finishing, is here.

Alan R managed to raise himself from his sick bed just in time to take part and his report, which sadly doesn’t seem to offer much for his tractor spotting fans*, is here (‘Martin’s Christmas Mud Fest’).

My short slideshow (not many pictures were taken) is here.

Last year’s report on the same walk, with route details and more information, is here.

28 sundry strollers set off gently in unusually persistent rain, along the Tissington Trail, whose surface had the texture of gluey cement which was soon replaced on our boots by the gluey mud on the descent to Mill Dale, where we were led by the unlikely apparition of a mud loving vampire dressed in a Sherlock Holmes outfit (see above).

The stupid and lazy ploughed through a flood beside the bulging River Dove, leaving them with rather moist underparts. The more sensible avoided this obstacle and even occasionally gathered for a head count (I was taking my leadership duties seriously).  All 28 were still in tow by the time we approached the junction between Wolfscote and Biggin Dales.

It being time for elevenses, a fair number of the party ably demonstrated that they were only there for the cake.  And more cake.

Then it stopped raining and some blue sky appeared, as is customary on most of my walks.  Spirits were high as we ploughed on past a heron and a kestrel to the narrow bridge that marks the entry to Beresford Dale and the last lap to the Charles Cotton Hotel, where we arrived early and left late, after the usual sumptuous Christmas lunch.  Thanks go to all the staff who looked after us so well, albeit they failed to nail the vampire, who very strangely seemed to run out of puff on the latter stages of the subsequent stroll back to the cars in the dark.  Before the night had completely engulfed us we passed through a field of sheep notable, as last year, for the newborn lambs that were tottering around in the gloom.

Then there was much fumbling with Christmas cards in the dark, and we went home.  Thanks for coming, everyone – it’s great to see you, albeit only once a year in some cases!

A quiz took place at lunch time.  Mick, Gayle and Jeff won it, and they lightened my bag by relieving me of some prizes.  If anyone would like to have a go at this quiz – and there’s another prize on offer for the ‘best’ submission by 31 December – it’s reproduced here.

Next year’s walk will be on Sunday 8 December 2013, with further details not yet decided.

* Alan’s blog has an astounding number of followers due to his lifelong obsession with tractors and the tantalisingly occasional iconic images with which he teases those fans!
Posted by Phreerunner at 12:07 7 comments: