A Christmas Walk, and other stuff

Those of you using Google Reader to view this blog may have noticed that I accidentally posted a round robin message, which you may also have received by email.  Luckily, it wasn’t a serious faux pas (except in that it omitted to incorporate an image!), and on reflection I’m reiterating the text of the message below.  If any readers would like to be added to (or indeed deleted from) our email circular list, or join us on any of these jaunts, do let us know.

The snapshot was taken from Thor’s Cave on 6 October.  The view will have taken on a different hue by 12 December! 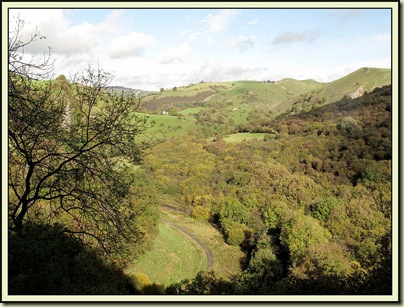 We think we have a nice route for a Xmas walk on Sunday 12 December, starting from Wettonmill.

Details are here.  Please let us know, by 30 November at the latest, if you plan to come, as we'll need to pre-order the food.  We'll let you have the menu closer to the time.

We have had to change the dates of the last two evening walks of the year, to 10 November (next Wednesday) and 20 December.  Details for that small minority of you who may like to turn up are here.

These days our day walks tend to be at fairly short notice, geared to the best of the weather.  Do let us know if you would like to be kept informed of short notice mid-week walks.

We'll be in Wales the week after next, and are happy to set provisional dates for any of the 'Great British Ridge Walks' mentioned here.  So let us know if you'd like to join us on any of those routes, on any particular day.  We are unlikely to be doing them all - it'll depend on the weather.

That's all for now.

We hope you are well, and enjoying life.

Posted by Phreerunner at 12:06 No comments: 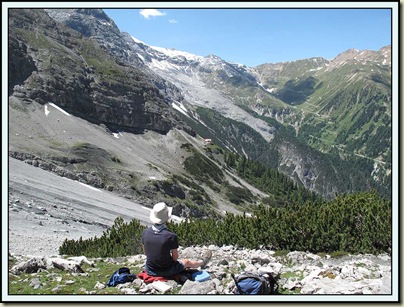 It’s on dull, overcast, somewhat drizzly days like this that it’s nice to revisit images from earlier in the year, and re-live those lovely high Alpine days when Sue and I were enjoying unusual warmth up at 2500 metres whilst the rest of Europe was sweating it out below.

Here, on a day walk from the campsite in Trafoi, Sue is looking towards Rifugio Borletti (dead centre), where we had earlier enjoyed refreshments, beyond which the unmistakable hairpins of the Stelvio Pass wind inexorably up to its 2800 metre summit.

My posting made at the time is here.

I’ve still not really touched the pictures from that trip.  I suppose that’s what I should be doing on days like this.  That and finishing my TGO Challenge slideshow.  Oh dear, there’s some new gear to write about as well.  And yesterday’s walk.  The distraction of unboxing and sorting a lorry load of possessions at Mike’s house doesn’t help, of course.  There are rooms over there to decorate as well, once the contents of 20 or so huge boxes have been stashed in his loft in more manageable bags. Then, what to do with those contents…

So, now you know why postings are currently a little sparse.  “House Admin.”

How did I ever find time to go to work? 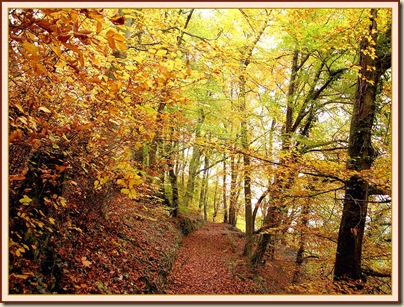 An email from Sue and David drew us this morning to a 9.30am rendezvous, after a suitable lie-in due to the clocks going back, at Owl Cottage in Cressbrook. 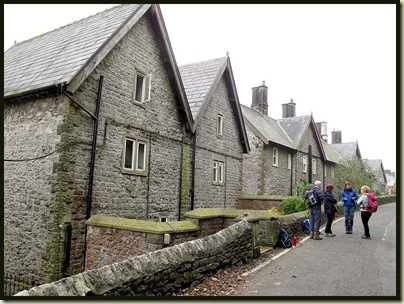 Gaynor was also staying there, as were Nicky and Jenny.  Andrew (Notchy) turned up as well, so after a lengthy coffee break we ambled down the hill past the Millennium Stone and the Millennium Tree, to admire the views from Cressbrook weir. 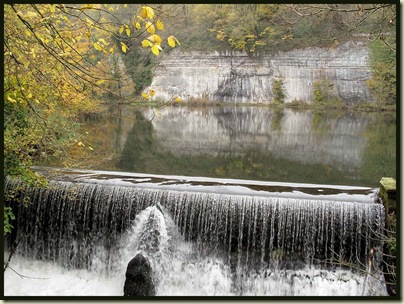 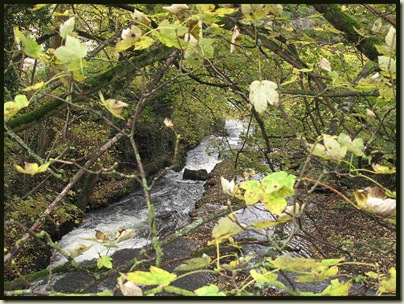 As you can see, it was heavily overcast.  But the rain kept off and we enjoyed the gentle strolling, catching up with Sue and David’s activities over the past year, and with Notchy’s recent adventures in Bhutan.

Luckily the water level was low, so we could enjoy the valley route up Miller’s Dale, where three female goosanders floated gracefully past, whilst coots squabbled, dabchicks dived and dippers toured the briskly flowing river.

We soon reached Litton Mill.  Sue and I had passed by the derelict mill many times in the 1990s, wondering whether the planned redevelopment would ever transpire.  Whatever the downsides of the refurbishment (I’m sure there must be some) the appearance of the old building has been transformed and it would appear that some attractive apartments have been created. 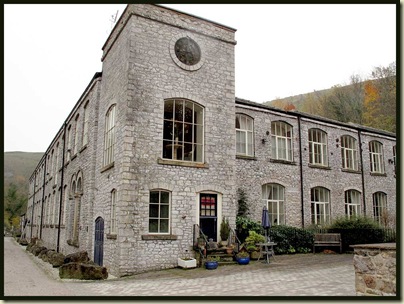 Beyond the mill, a footbridge across the River Wye leads to a pretty woodland approach (pictured above) to the disused railway line that used to link Derby with Manchester.

The line was opened in 1863, when some people saw it in the same light as many of us now view wind farms.  For example, Ruskin wrote about it: 'There was a rocky valley between Buxton and Bakewell, once upon a time, divine as the Vale of Tempe... You Enterprised a Railroad through the valley - you blasted its rocks away, heaped thousands of tons of shale into its lovely stream. The valley is gone, and the Gods with it; and now, every fool in Buxton can be in Bakewell in half an hour, and every fool in Bakewell at Buxton; which you think a lucrative process of exchange – you Fools everywhere'. 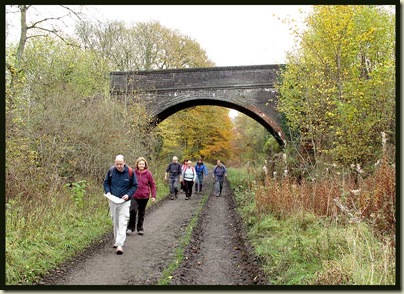 Our stroll continued through the Litton Mill Railway Cutting - now a SSSI (Site of Special Scientific Interest), and past Miller's Dale Quarry, with a supporting embankment currently under restoration.

At Miller's Dale a second viaduct was added in 1905 to house the line going north towards Buxton and Manchester.  Dr Beeching was responsible for the closure of the line in 1967. 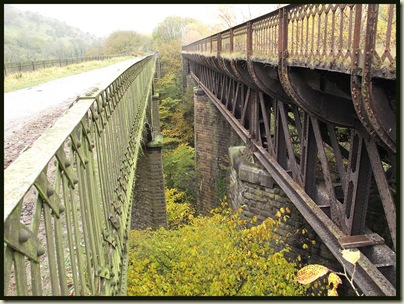 We stopped here for elevenses – tea and plentiful CCS – and for this self-timed group photo before Nicky and Jenny took an easier alternative route. 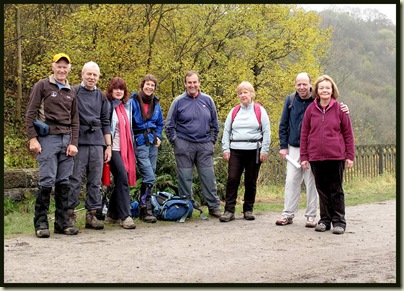 It appears that the tunnels on this line may be reopened in 2011.  They were certainly navigable for years after the line closed in 1967 and were presumably blocked for safety reasons.  If the rumour is true, it’ll be great to be able to walk through them again in the future.

After crossing the older viaduct we turned right along a minor road and descended to Miller’s Dale from the first corner.  Missing a left turn up Monk’s Dale, we reached the church in Miller’s Dale.  So it was back up the path to the left of the church and straight on after a gate where the main path heads left.  The stony path leads into Monk’s Dale.

If you haven’t been to Monk’s Dale you haven’t lived.  At first sight these stepping stones may lead up the dale.  Take care, they are slippery, as these three falling souls demonstrate. 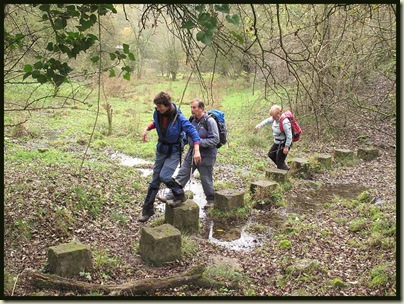 The stepping stones lead out of the dale, so we retraced our steps to regain the valley path.

The dale drips with mosses and lichens.  Each step requires care.  There’s a choice of foot placement: slithery rock or gooey mud being the usual options, the sticks and branches being best avoided.  New Zealand ex-pats pining for the rain forests of home could do worse than visit this dale. 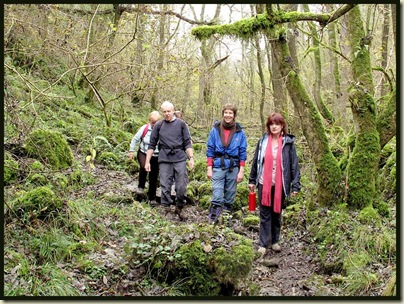 Eventually, and it did take some time, we emerged at the minor road that marks the start of Peter Dale, which is a little shorter and easier.  A grassy knoll provided an excellent spot for lunch, during which we were mugged by a muddy spaniel.

Moving on, Dale Head provided our escape onto easy paths for the rest of the walk.  First along a metaled lane to Wheston, from where ‘white roads’ took us to the north of a trig point at 381 metres and down to the quiet village of Tideswell, looking very out of season in the murk.

Continuing to Litton, the wide grass lined boulevard that runs through that village showed more signs of life, even a pub and a tea shop.  But we hastened onwards towards our destination. 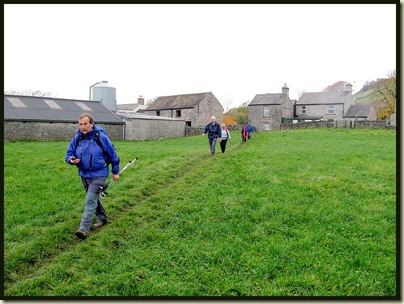 There were quite a few other folk in Tansley and Cressbrook dales.  We let them pass whilst draining the last dregs from our flasks, before continuing on a fairly direct route back through golden woodland towards Owl Cottage… 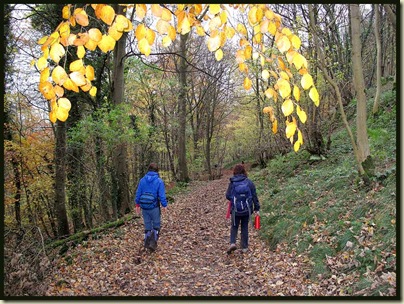 …where tea and cakes were enjoyed at leisure. 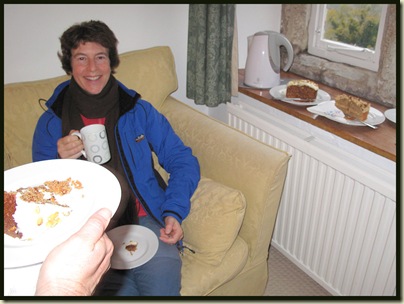 This was an excellent day out in fine company.  Thanks for the invitation, Sue and David.  Here’s the 17km route with 750 metres of ascent.  It took us a fairly leisurely 6 hours. 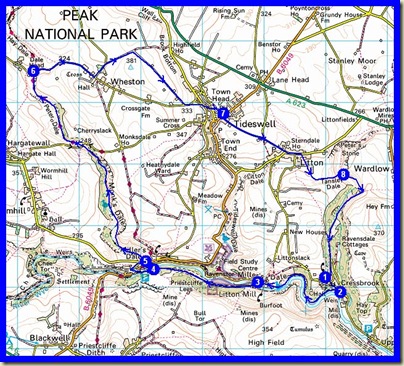