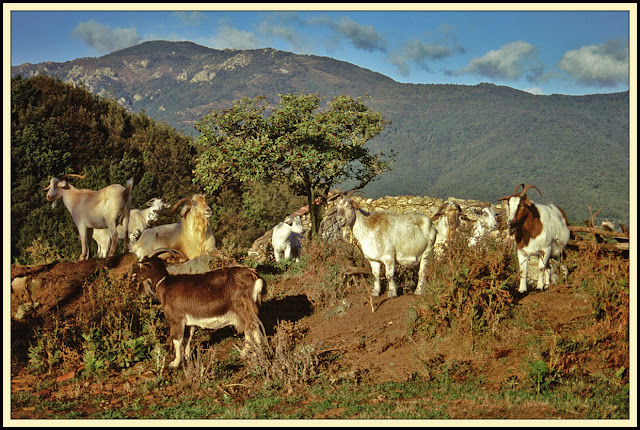 Goats at Mas Nou
Sue and Martin's Big Adventure
Day 53 - Thursday 16 September 2004 - Stage 44
Postcard Summary
Homely Gite to de L’Ouillat
More trees and blackberry lanes as we head east in fine weather- 7.3 hours, 21 km, 1000m ascent
Despite being nearly at our final destination, we only caught occasional glimpses of the today, as we progressed from the nice gite at Las Illas to another gite at Col de L’Ouillat.  We travelled an undulating road (mainly dirt tracks bordered by succulent blackberries) down to a dreadful place called Col du Perthus, where the streets were crammed with people trying to buy cheap booze from the many supermarkets.  Then along a quiet road for lunch by an ancient fountain, before taking woodland paths up to our destination.  The views from the gite were breathtaking, west to Canigou, and south into .  But the gite was fully booked!  This turned out to be to our advantage, as we had a meal there at 6.30 and were in our cosy tent in the forest when the party arrived, all in 4WDs!  We were able to go to sleep early, in preparation for an early start on our final day. 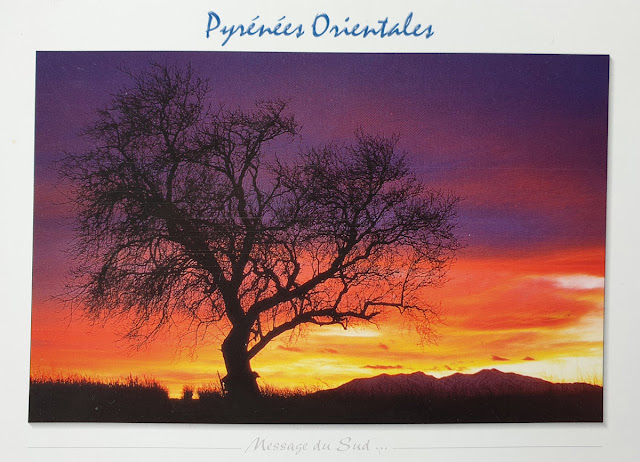 Diary Entry (by Martin)
Ann and Vincent move early as they have to be at Col de L’Ouillat by 3 pm, and they are determined to get there in time. They are very quiet but this still gets us up by 7 am. We join the others for breakfast - they leave soon after 7 am, and we eventually get away in clear weather at 7.40.
There's a cool breeze as we go (dressed in shorts and t-shirt as near the ) up a lane from 550 metres to 730 metres. First home cooked breakfast for some time - muesli - and Sue has stomach ache. Nurofen sorts it out.
Look down on the red roofs and yellow walls of Las Illas - a pretty village. Trees everywhere now, so views are limited. Pinks are still in flower, and ragwort and others. The blackberries are superb. The sun pops up briefly at 8.25, but for most of today we are in the shade of hills or trees. Cacti are occasionally seen. In the ? We continue to Mas Nou through dark beech woods penetrated only by thin beams of light.


The peaks ahead are covered by mist, but this clears as the day develops into a crystal clear autumn day, with deep blue skies and distant views into both and . Our immediate surroundings, mid-morning, resemble an October day in . The view north is across plains and to outlying peaks of the foothills. Glaring sun blinds as we go past banks of heather and lanes laden with blackberries.
We reach Col del Priorat at 10.10 and admire the magnificent border stone number 565.
Next, and until the end of today's walk, we are in a cork tree zone. The trees are stripped up to about 10 feet high, freshly stripped trees showing bright red, with the stripped wood darkening with age. The cork seems to gradually grow back. 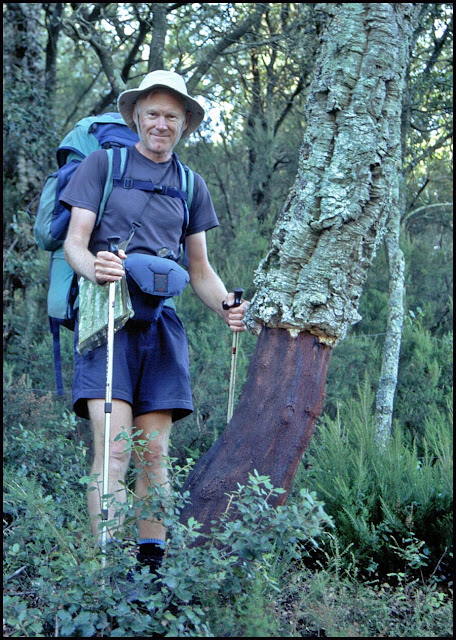 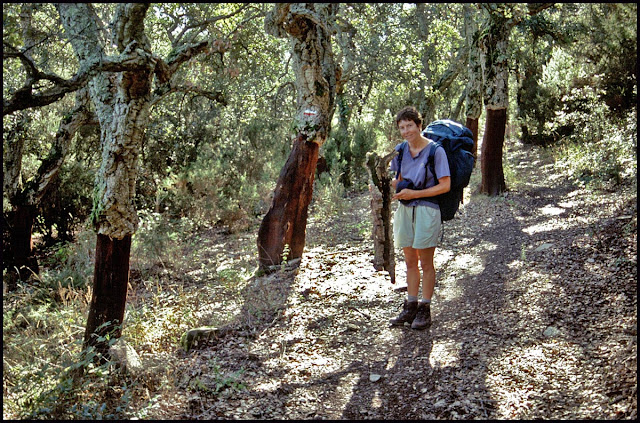 A message from Vincent and Ann, (written on a piece of paper and secured by two rocks in the middle of the track!) alerts us to the trees we have already admired. We pass a medieval priory and an even more magnificent border stone, on a point with extensive views both north and south, below a 17th century fort. It's very windy here at about 350 metres, as windy as at any time on this trip. 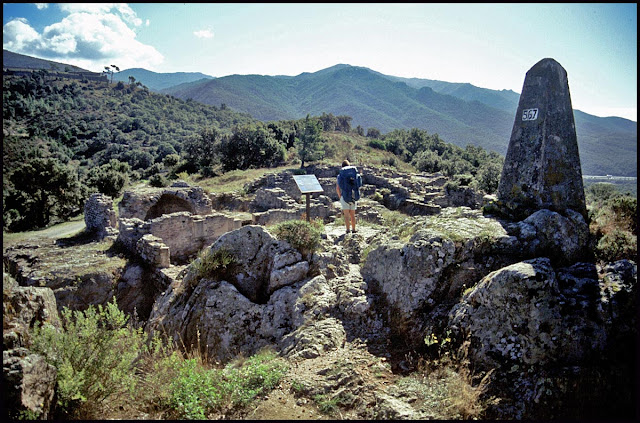 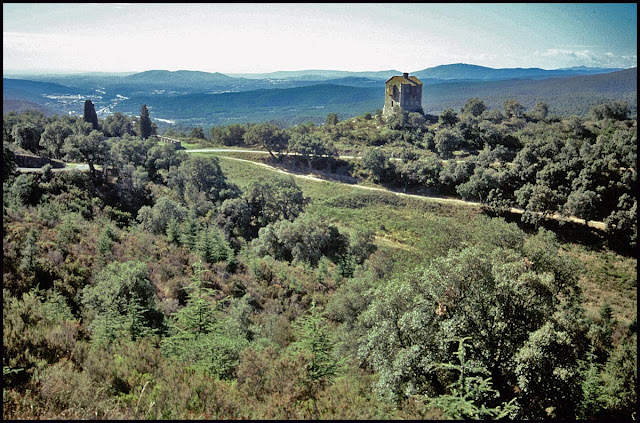 A view into before Col du Perthus
And so to Col du Perthus, a pretty nasty place full of traffic, supermarkets selling booze (a feature of French/Spanish border towns) and crowded streets. We quickly got adequate supplies to last until Banyuls, but skipped the fruit due to the lack of a grocery. 12 to 12.30. 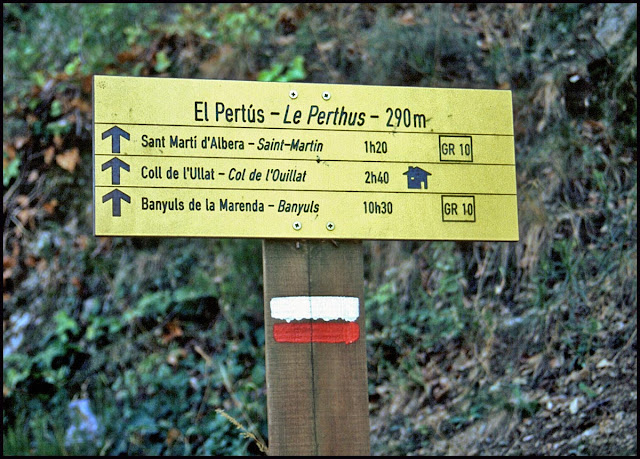 Banyuls now signposted at Col Perthus
Then up a cool, shady road for lunch at an enclosed fountain - Fontaine Ste Marie (1885). 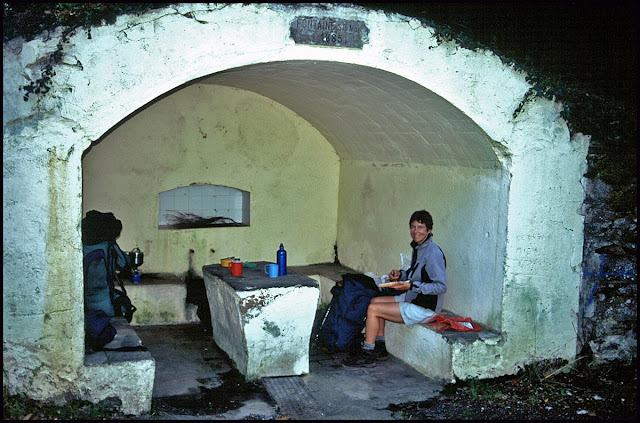 Fleeces needed despite the low venue and close proximity to the ! Blue cheese / pâté  went down well. Then we ascended on nice paths - GR10 all day - up to the café / gîte at Col de L’Ouillat, before where a message from Vincent and Ann told us their taxi was here, so 'au revoir'. We missed them by just a few minutes, as we arrived at the at 3 pm, the time their taxi was due.
This is a superb spot, with extensive views south to eight lines of ridges in to the south west and south south west - perhaps 50-60 miles to the furthest, high, line of hills.
But dominant on the horizon to the west is the Canigou massif. It looks close, but it's four days walk away! We are unable to identify the main summit. 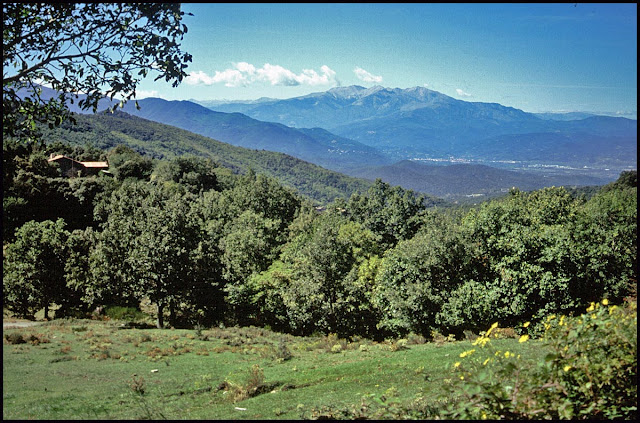 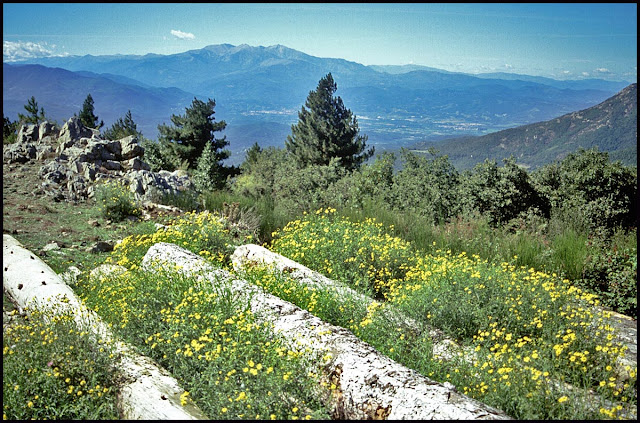 After cold and delicious Oranginas, Sue makes an approach about staying in the gîte. It takes forty people, so this is a formality as we seem to be the only people other than Vincent and Ann staying in gîtes. But no! the luck Vincent and Ann have brought us deserts us. The gîte is full! So we will camp outside and they can provide a meal at 6.30. So that's ok really as we don't fancy another 1½ hours to the unmanned Tagnarede Hut, and camping should enable us to get an early start on tomorrow's long, final stage.
The meal was good. I had anchovy salad (more like small rollmops) and Catalan grill - lots of grilled meat and a slab of potato and salad, black pudding, bacon, pork chop, steak, sausage etc. Sue had a goat's cheese salad and duck in a honey sauce with peaches. All very good; the chef was relaxed even if the other two 'guardians' were pacing around, apprehensive about the large number of customers about to arrive. They did arrive - in about ten four-wheel drive vehicles, around 9 pm, after we had gone to bed. A fortunate camp, the gîte with 40 late night revellers would have been awful. 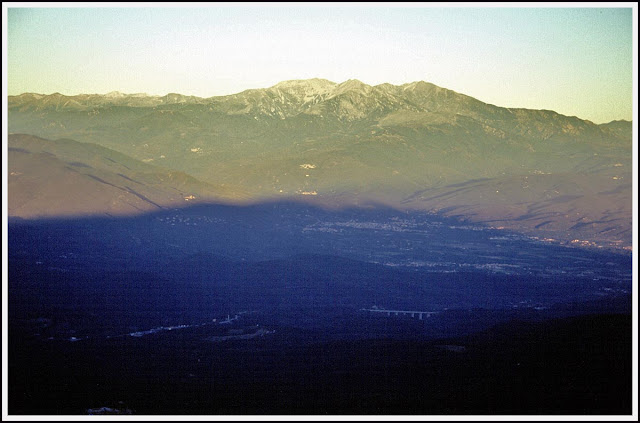 Next Posting
Previous Posting
Index
Posted by Phreerunner at 08:59 1 comment: 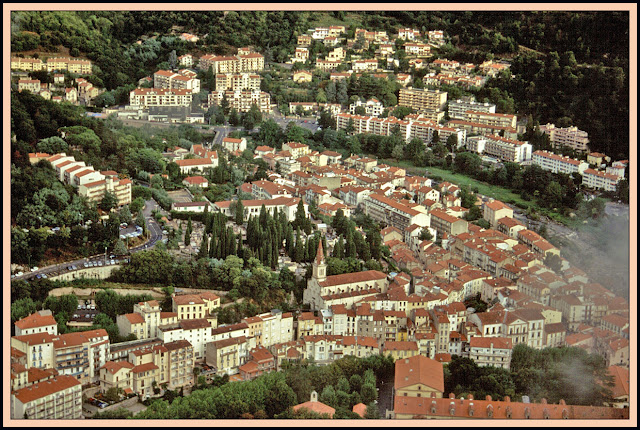 Sue and Martin's Big Adventure
Day 52 - Wednesday 15 September 2004 - Stage 43
Postcard Summary (on yesterday's card)
Hotel Residence Jeanne D’Arc to Las Illas
Long walk through Forests, partly in cloud – 8.7 hours, 14 km, 1400m ascent
After a dry start, more rain today, but over a ridge, the first sight of the !  Having not had a navigation error for a while, we had one today – in the cloud we struggled to find the summit of Roc de France – succeeded eventually!  But no views!  Nice route down, overlooking the sea, to Las Illas, a hamlet with a homely gite, which we shared with Vincent and Ann again, and a good restaurant with nice steak, and chocolate gateau!
Diary Entry (by Sue)
An ascent of Roc de Frausa Oriental (1450 metres) and our last excursion into .
It was a comfortable, if warm and very wet night in Amelie (rather relieved not to be camping). A nice breakfast was laid out in the Salon de Telévision and we left at 8.30, where the market was set up outside.
It was dry to start and the path rose straight from the town centre. The steepest part was closest to town, similar to yesterday. Very humid and sweaty until we got higher. These hills are almost entirely wooded, so only occasional views can be seen, including a good one of Amelie and the Canigou massif. 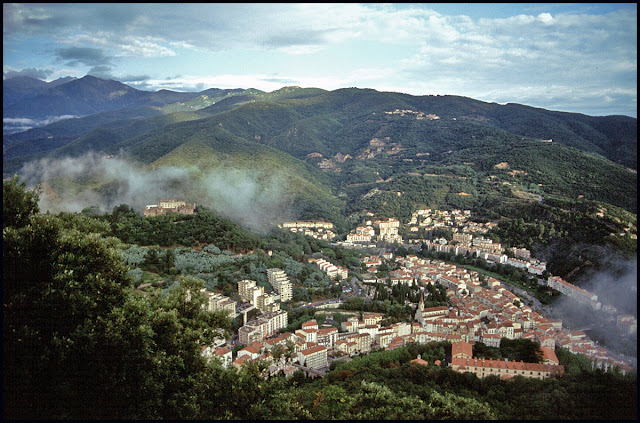 Besides the trees, all we see is the forbidding farmhouse of Can Felix, deep in woods and with dire warnings not to get too close in both guide books, a tumble-down sheep farm, and a col. Mountain mix sustained us for the morning, which turned out to be long. After leaving GR10, the cloud came in, swirling around the trees. 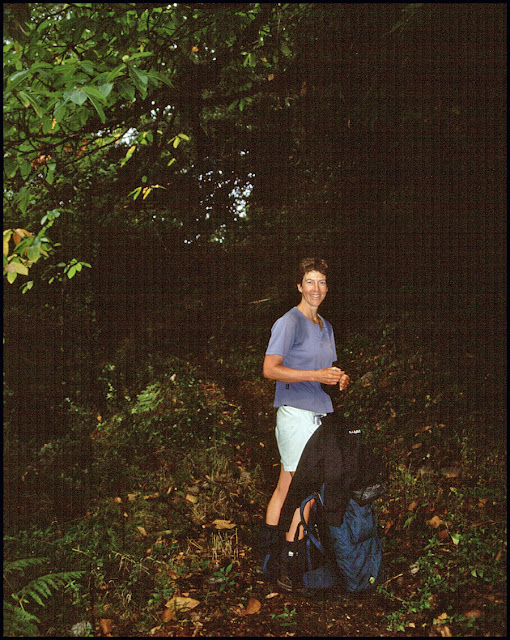 When the path started to descend steeply, instead of climbing to the summit, we became a bit suspicious - it was incorrect and lost us 15 to 20 minutes. However, the error had been made earlier, by missing a sign to the left, so we wandered around in the cloud amongst rocks, with the occasional glimpse of the view, before backtracking.
Lunch was eaten hurriedly in the cloud around 2 pm, when hunger was starting to make me irritable. A brew went down particularly well. Finally, the summit was located, but no views, sadly. During the climb, earlier, the path rose to a ridge where we had our first view of the sea, with 2½ days to go. It was a welcome sight! 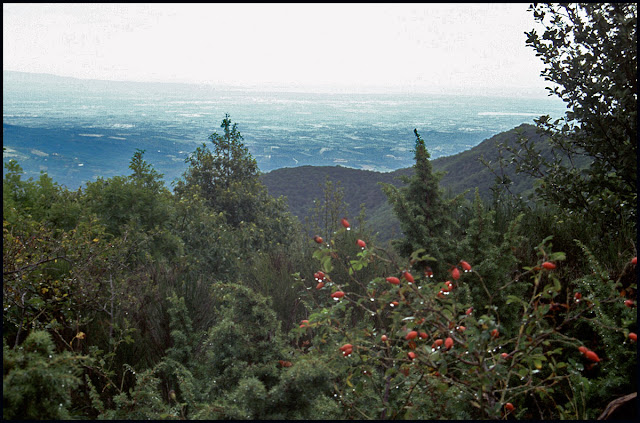 The descent to the hamlet of Las Illas was good, with soft ground down a ridge in beech forest, then a narrow path, and finally track and more path. The weather improved, with a cool breeze (hardly a warm Mediterranean one!) and views of hills before the sea. We came across our first border stone for weeks (number 557!) as we crossed back into . 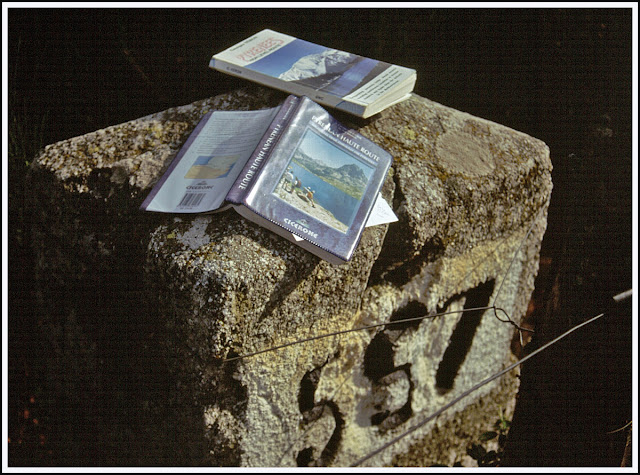 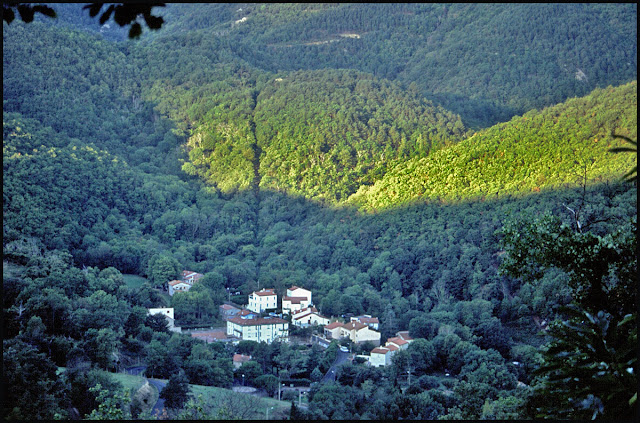 Looking down to Las Illas
Las Illas has a really nice gîte for 16 people. Arrived at about 5.30. Alone until 6.30, when Vincent and Ann arrive. We have a bowl of tea and showers. Outside, the weather has deteriorated again and rain is teeming down. After 7, we have to run the short distance up the road to the Hostel de Trabucayres to avoid a soaking. Here, a nice meal of salad, steak and excellent chocolate gateau, enjoyed in the company of Vincent and Ann. They tell us about the boat they are doing up to live in - a Dutch Chalk or barge. There is only one other couple in the restaurant. The rain has stopped when we return for bed around 9.30 pm.
Stats and route (Viewranger):
17.5 km, 1250 metres ascent, 8.7 hours 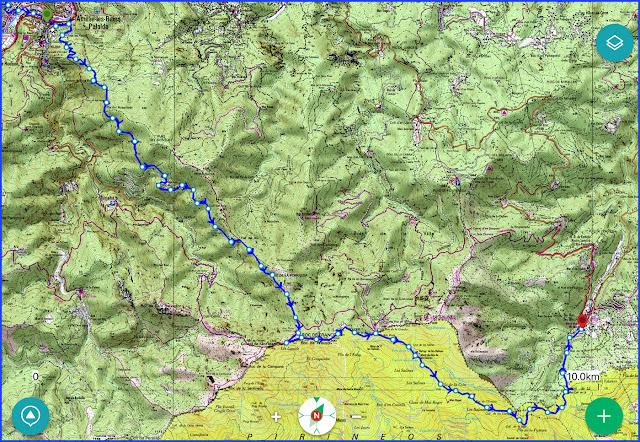 Next Posting
Previous Posting
Index
Posted by Phreerunner at 17:11 No comments: