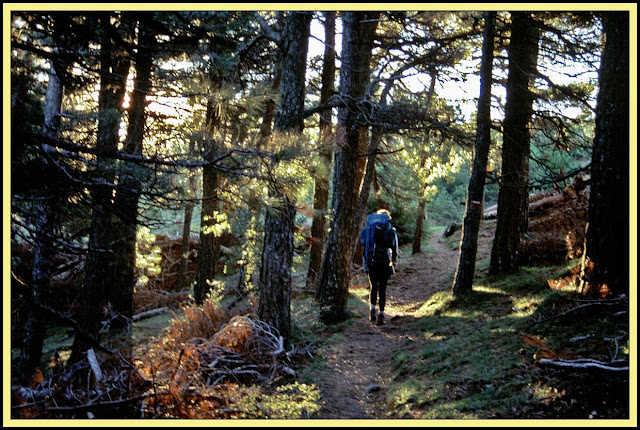 
Despite a cold and windy early start (7.30am), this was a brilliant day.  Canigou glowed pink, and we saw the coast from the at 1250m, Pic Neulos.  We passed people out collecting mushrooms in the beech woods of the final ridge.  Our lunch spot on Pic Sailfort gave the first view of our destination, Banyuls, and way up and down the coast.  Fantastic views – clear for 50+ miles in all directions.  The afternoon passed all too quickly as we passed by cactus plants and vineyards on our well-marked (for once) path to the sea.  Sue was determined to end the walk with a splash.  She did, but not for long as the sea was cold!  Then to a rather dusty campsite to consume an excellent (and cold) bottle of champagne before returning to town to contemplate our success, and the rest of our lives. 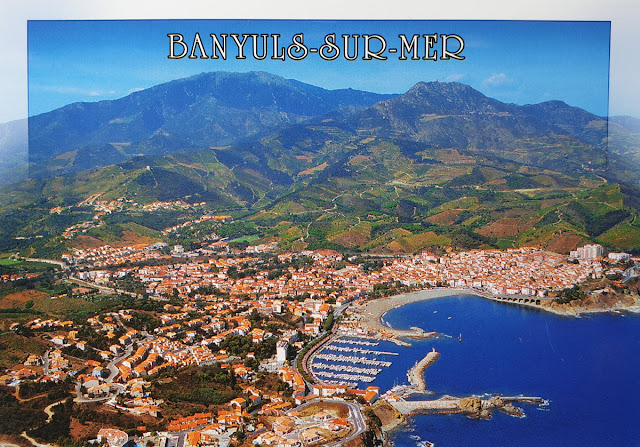 Diary Entry (by Sue)
A magnificent final day to Banyuls-sur-Mer. There was a cloudless sky all day and the views were crystal clear. In view of our early night, it wasn't difficult to get up soon after 6.30, when it was still dark.


It was a long-trouser and fleece morning as the wind was strong and cold. So, a 7.30 am start - the earliest of the trip! From adjacent to the chalet, we were fortunate to see the effects of the sunrise on the Canigou massif to the west - it glowed a lovely shade of pink for a short time. There was a 300 metre climb to start, through beech woods (see top picture), then up the grassy ridge to Pic Neulos, at 1256 metres our high point for the day.

The low sun was in our eyes as we walked. Great views of the coast from the top, but Banyuls was hidden by the ridge to come. The mast on the top was protected by a serious amount of barbed wire that the path skirted around in more shady beech woods. Down steeply and a stop for chocolate and to change into shorts (although I retained fleece and gloves for a while longer!).
The route today sticks closely to the border ridge, until Pic de Sailfort, with us staying just to the French side. It also follows GR10, but despite its regularly spaced red and white flashes we managed to lose it for a short time, so skirting round one of the cols in the woods! Here, a lady was searching out mushrooms, basket in arms.

Another steepish climb up grass, with lots of martins catching the numerous insects just above the ground, to arrive at the next summit, Pic de Pradets (1175 metres). 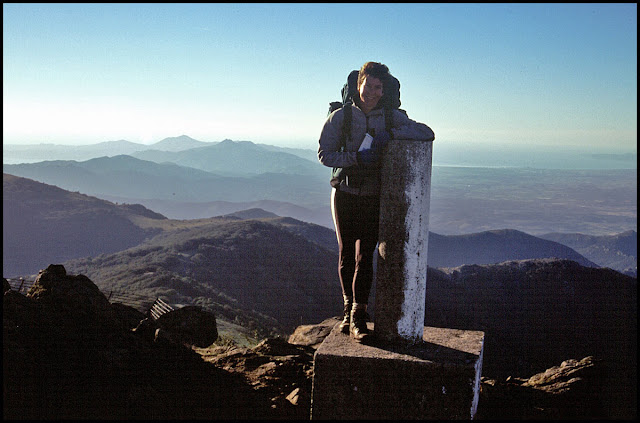 On one of the summits along the ridge 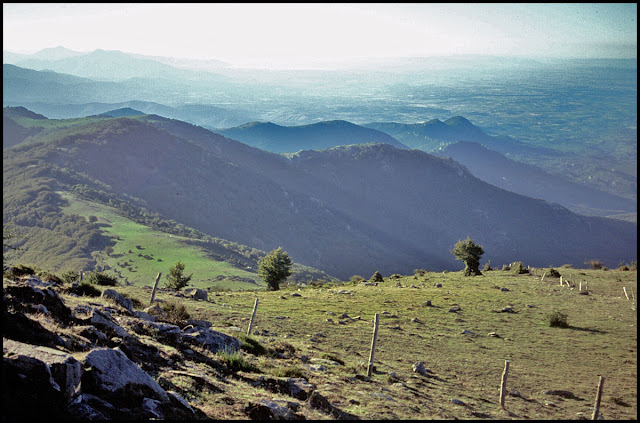 The view to the coast 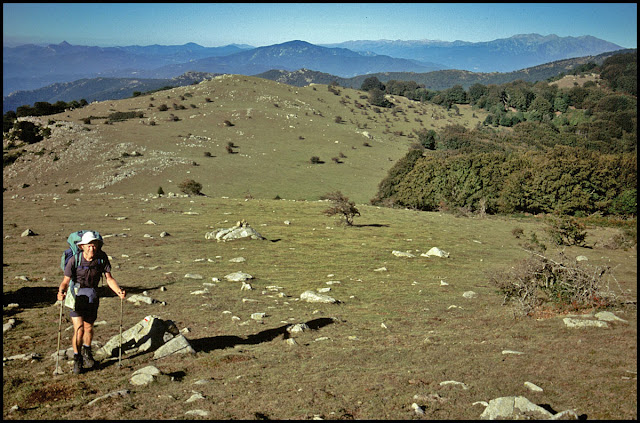 Looking back to the Canigou massif
Mountain mix here to sustain us after the early start. The scent of thyme accompanied this section, growing in the grass. At the top of Pic des Quatre Termes (1156 metres), we have a chat with a man who is out mushrooming but has failed to find any, and discuss our route. 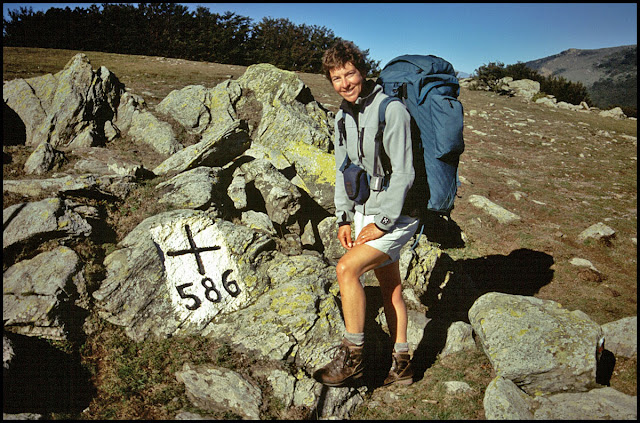 Border stone near Pic des Quatre Termes
The ridge curves around to the final one of today's peaks, and we succeed in deviating from the path again, thus missing the top of Pic de Sailfort.
More 'treasure' is found on the way - this time a Special K bar! Our lunch spot is magnificent and fitting for the last day - from Pic de Sailfort, the Côte Vermeille is laid out beneath us nearly 900 metres lower down. We can see Banyuls at last, also Collioure and Port-Vendres, and a long way both north and south.
The lunch provided by the supermarket at Col Perthus yesterday wasn't the best, but the truffle chocolate that followed was good. 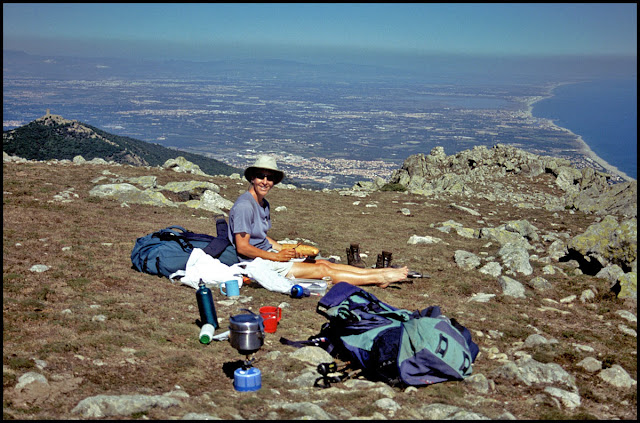 Lunch near the summit of Pic de Sailfort, with (below) a view to Banyuls 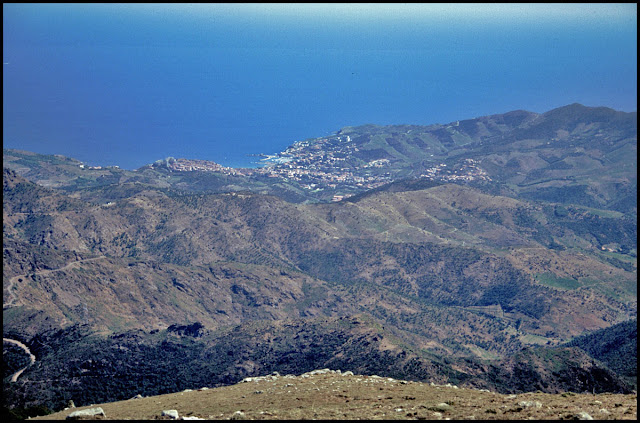 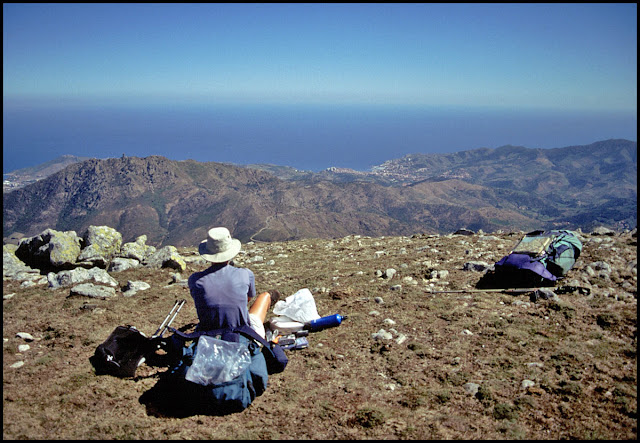 Banyuls was still over three hours away, but the descent down a rocky ridge was steep and progress was swift. A couple of  level paths traversed the hillside, from where turrets could be seen on the scrubby outcrops. A further steep section cutting off the corners of a road had Martin covered in dust - was this an accident or an intentional fall? 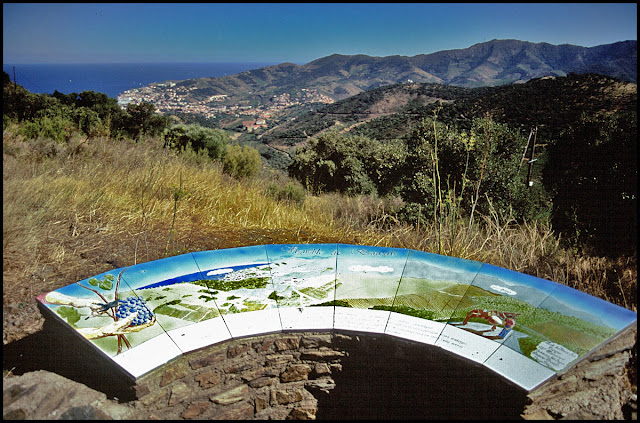 Orientation point above Banyuls
A water point at the bottom topped up our depleted bottles with cold water. During the last hour or so, the route descended gently on dirt tracks through vineyards where the vines were laden with ripe black grapes, and the red roofs of Banyuls got closer. 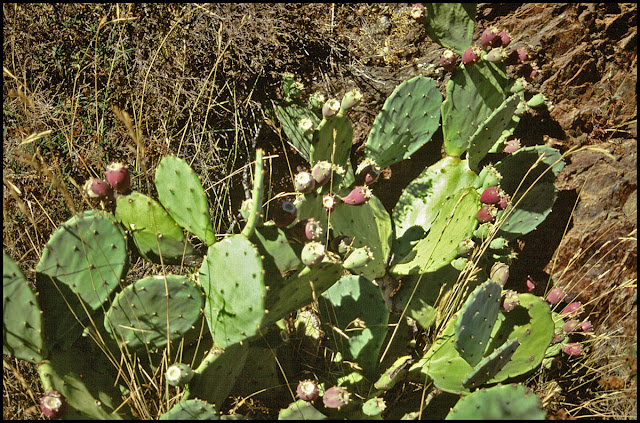 Cacti and (below) grapes 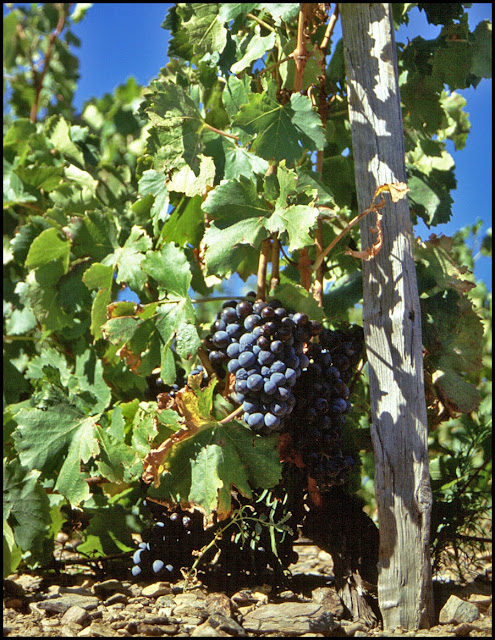 The final stretch on the streets of Banyuls brought us to the beach at just after 4 pm. No time for emotions, as self-timed photos must be taken! 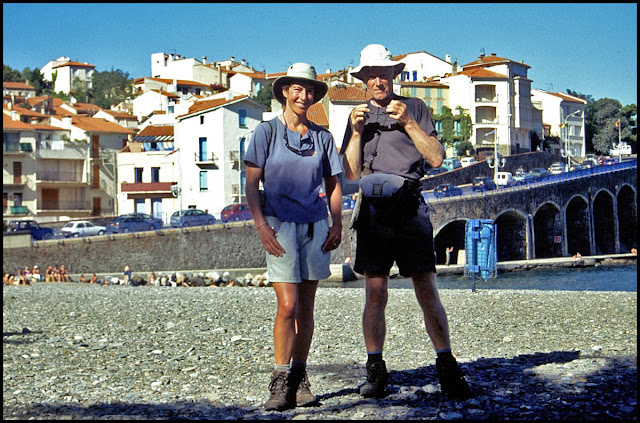 I insist on a swim, although the beach is pebbly, the slope into the sea is steep and the water a bit murky and cold. At one of several wine merchants, we splash out on a €28 bottle of cold Jacquesson champagne, and stop at the supermarket to buy plastic cups and crisps (to avoid getting too drunk!) on the way to the campsite. The tent is pitched on stony ground and tied to trees as pegs are useless, then we enjoy cold champagne, reflecting a little on the wonderful journey we've done and how smoothly it has gone. 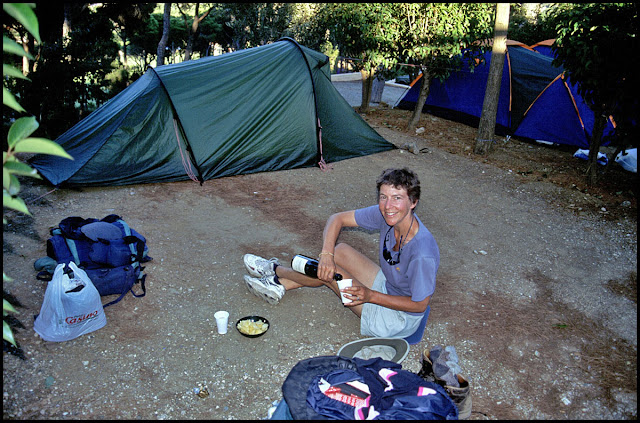 We have dinner at the waterfront, outside under clear skies - goat's cheese salad and sole with almonds (M), and moules gratinée and squid in tomato sauce (S), and a half litre of rosé.
The hard ground goes unnoticed, as we fall asleep quickly, around 9.30 pm, very satisfied and looking forward to the weekend off!
Stats and route (Viewranger):
22 km, 700 metres ascent, 9 hours

A job well done. My night in Banyuls was one of the most uncomfortable ever. I lay on the bed naked drenched in sweat all night with no sleep - goodness knows how hot it was.

Oh dear Conrad, but you looked so happy with your Orangina!
We slept very well in the tent - no hotels for us! - and we had a few days spare before our flight home, so I'll continue this series of postings by way of a record of what we got up to...