Dream, installed in 2009, is a sculpture and a piece of public art by Jaume Plensa in Sutton, St Helens, Merseyside. Costing approximately £1.8m, it was funded through The Big Art Project in coordination with the Arts Council England, The Art Fund and Channel 4.

In 2008 St Helens took part in Channel 4's "The Big Art Project" along with several other sites. The project culminated in the unveiling of Dream, a 20 metre high sculpture located on the old Sutton Manor Colliery site.

St Helens retains strong cultural ties to the coal industry and has several monuments including the wrought iron gates of Sutton Manor Colliery, as well as the 1995 town centre installation by Thompson Dagnall known as "The Landings" (depicting individuals working a coal seam) and Arthur Fleischmann's Anderton Shearer monument (a piece of machinery first used at the Ravenhead Mine).

The council and local residents (including approximately 15 former miners from the colliery) were involved in the consultation and commission process through which Dream was selected. The plans involved a full landscaping of the surrounding area on land previously allowed to go wild after the closure of the pit.

Dream consists of an elongated white structure weighing 500 tonnes, which has been cast to resemble the head and neck of a young woman with her eyes closed in meditation. The structure is coated in sparkling white Spanish dolomite, as a contrast to the coal which used to be mined here.

Jaume Plensa himself stated "When I first came to the site I immediately thought something coming out of the earth was needed. I decided to do a head of a nine-year-old girl which is representing this idea of the future. It's unique."

The original design of the sculpture called for a skyward beam of light from the top of the head, and the sculpture's working title was Ex Terra Lucem ("From the ground, light"), a reference to St Helens' previous motto. Due to objections from the Highways Agency, the sculpture was not lit, but in 2010 a new planning application was submitted to St Helens Council for it to be floodlit.

The Dream sculpture is built out of moulded and cast unique concrete shapes, 90 pieces in all contributing to over 14 tiers (54 individual elements for the head, each weighing 9 tonnes (8.9 long tons; 9.9 short tons)). Dolomite was utilised as a concrete aggregate in order to provide the brilliant white finish. Additionally titanium dioxide was added to the mix in order to provide a self-cleaning mechanism. The construction required the construction of individual moulds for each piece and took a total of 60 days to cast.

The foundations of the sculpture extend 125 feet (38 m) into the ground with 8 piles driven in to secure it.

The sculpture is sited on an old spoil tip of Sutton Manor Colliery which closed in 1991 and it overlooks the M62 motorway.

I’ve borrowed all that from Wikipedia. The Dream sculpture was the focal point of this week’s mid-week stroll, kindly arranged by Keith on this occasion. I’d not been to the Dream before, and it was installed after my frequent trips to and from Liverpool via the M62 had come to an end. 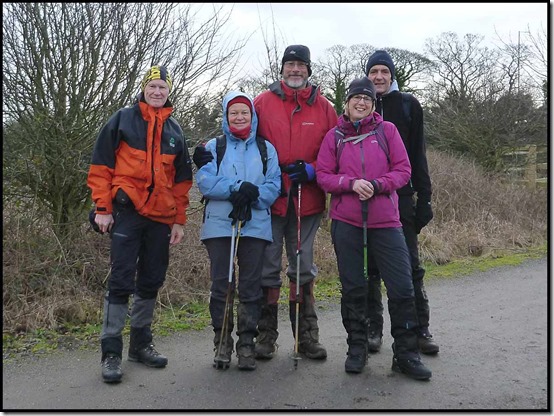 After a bit of urban walking from our parking spot at the end of Norland’s Lane, a good path led to the track bed of the St Helens and Runcorn-Gap Railway that operated from 1833 to 1982. 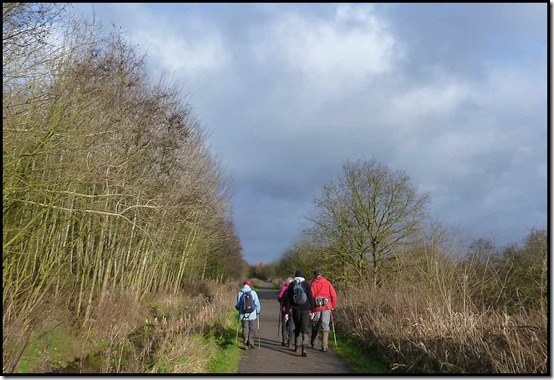 A well used path then led to the summit of the knoll, actually an old spoil tip, on which the sculpture is situated. We lingered for some time as the sun dodged in and out of some black clouds. 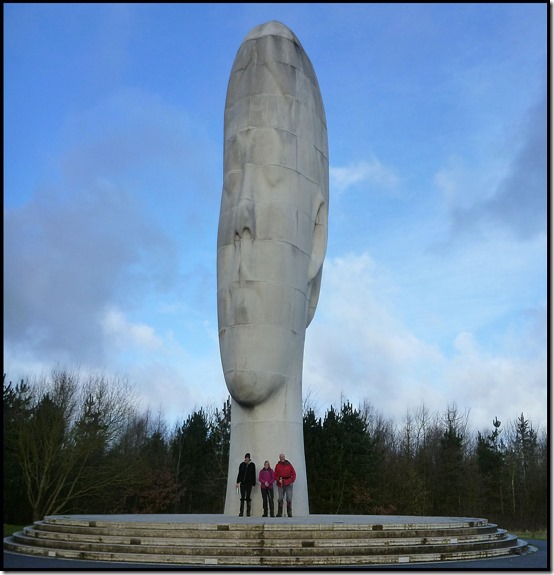 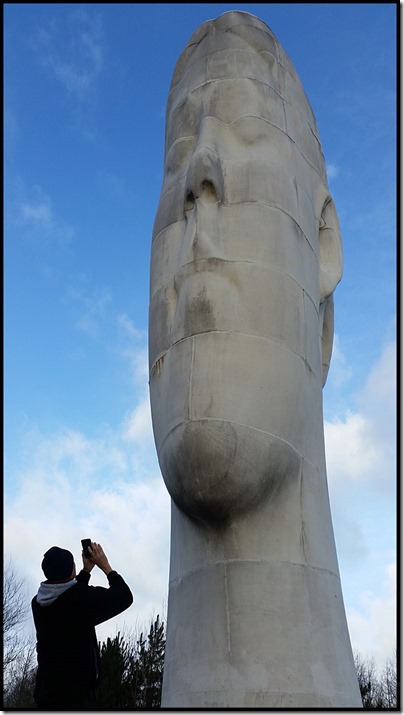 Eventually a large group of walkers arrived to admire the sculpture, which is looking a little tired after nine years of strong westerly wind and rain. So we left, in what was the brightest weather of the morning. 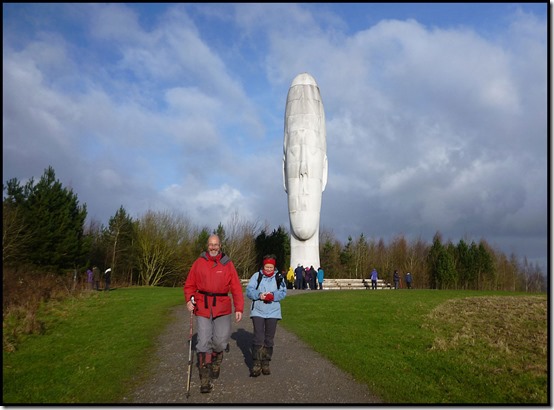 The only flowers in evidence were the bright yellow of some gorse, but there were also lots of these teasel seed heads. 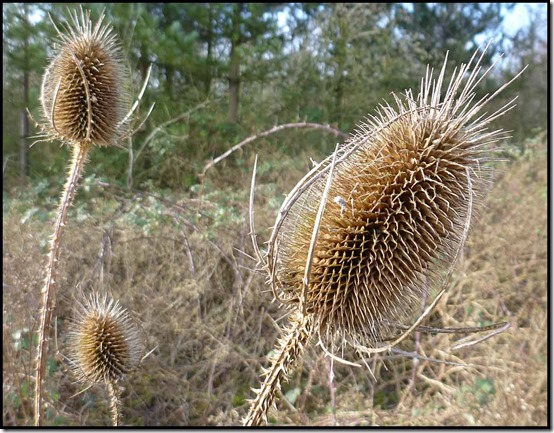 We continued along the pleasant route devised by Keith, pausing to admire a hunting kestrel and a majestic buzzard. Bird watchers would find plenty of interest hereabouts.

The walk ended a little beyond Pex Hill, a small nature reserve and magnet for dog walkers, which incorporates an old quarry that might provide the youth of Merseyside with their first experiences of rock climbing. 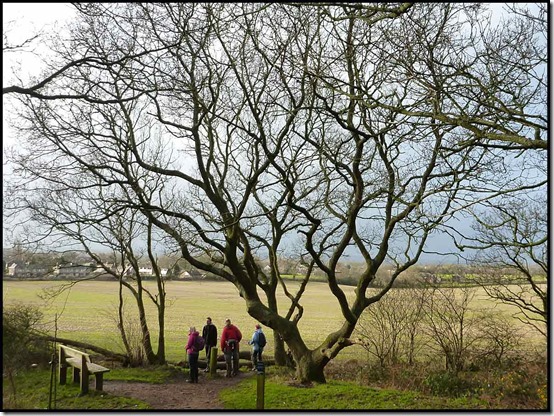 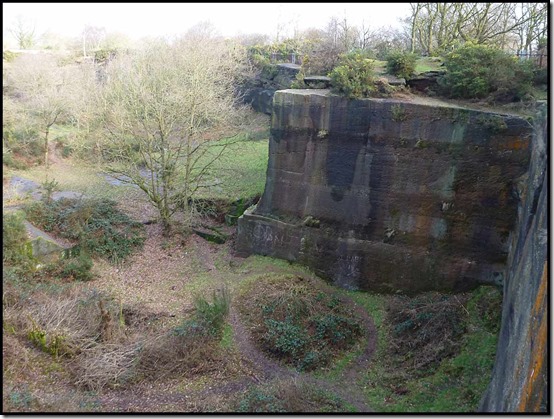 Here’s our route, from the good parking spot at the end of Norland’s Lane – 12 km with about 100 metres ascent. It took us 2.5 hours plus breaks. 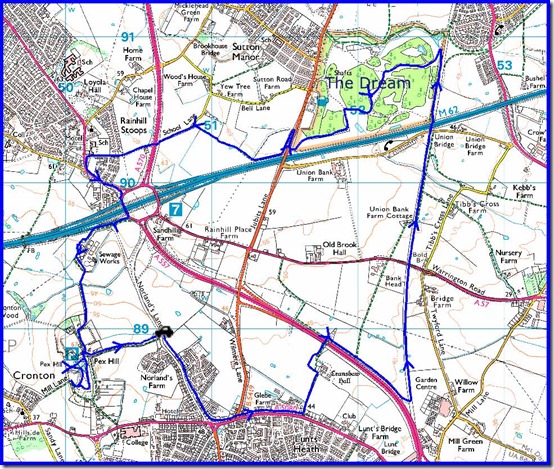 Thanks to Keith for organising this, my first proper exercise since New Year’s Day, thanks to an annoying cold and subsequent chest infection. 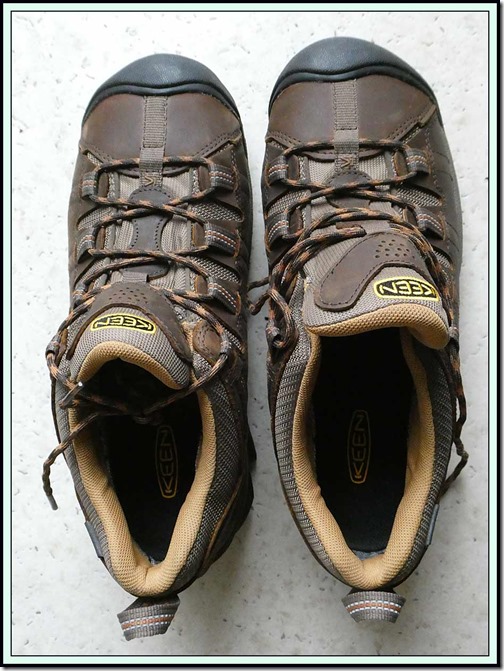 My first acquaintance with this shoe was in April 2011, when I was supplied with a pair for review back in the days when a few retailers felt that reviews from outdoor bloggers, in return for FOC products, might help their sales.

I duly earned my crust by writing a comprehensive review of these shoes, which together with all the relevant technical data, can be found here.

Since then, I have updated the original review and I am now on my third pair of Targhee II shoes. Unusually, Keen seem to have stuck with this product without ‘developing’ it, which must be some sort of tribute, in my mind.

The first three pictures in this posting are of this third pair, bought recently on-line from Mastershoe in Trowbridge for £89. 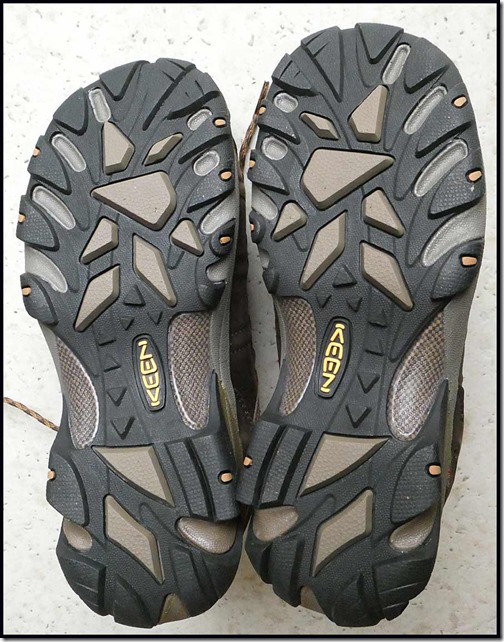 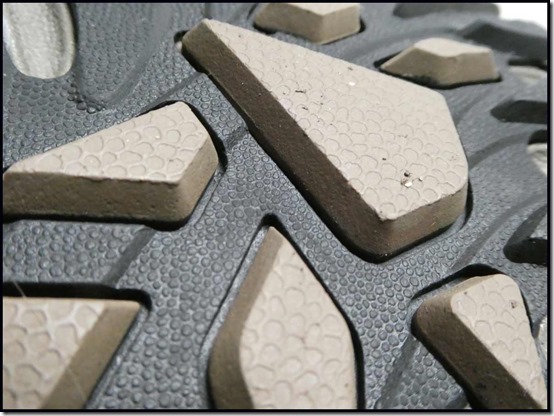 Meanwhile, the original pair that was reviewed back in 2011 was ‘replaced’ in 2015 by a new pair bought at MEC in Ottawa (when exchange rates were more favourable than they are today). Those shoes, pictured below, were bought for the purpose of trekking 900 km across the Pyrenees on GR11 (the Spanish route). 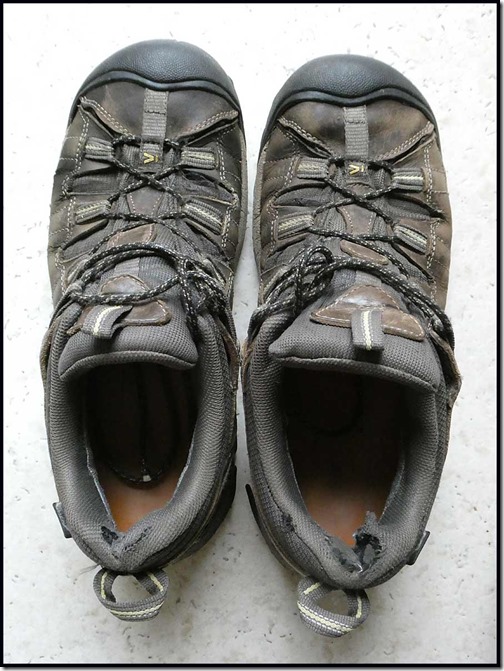 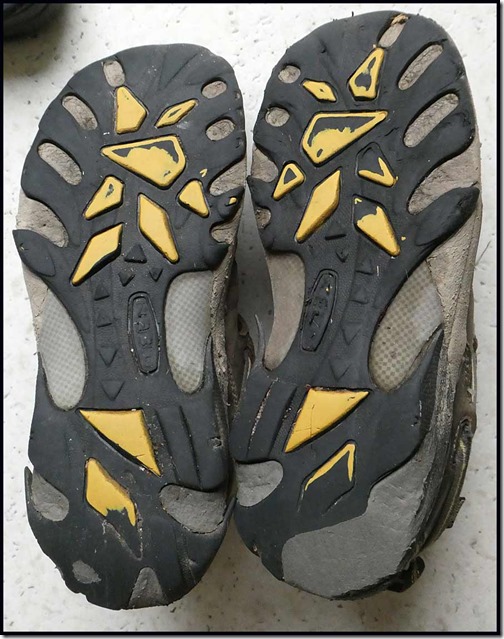 GR11 hardly dented the shoes, which I have continued to wear until the recent purchase from Mastershoe. They have now done 2400 km and are still going strong, but will now be used mainly for mountain biking. The waterproof membrane and the lacing system have remained intact, the main source of wear being on the soles and (shown below) the fabric in the heel area. That won’t have been helped by the frequent removal of the Salford insoles that I use. These are a tight fit and need to be removed to air the shoes properly. 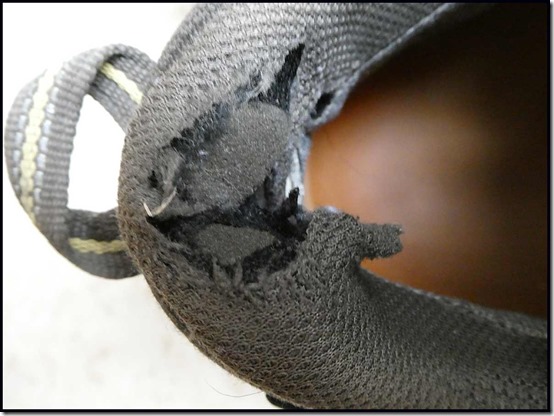 The final four pictures – below – are the last you will see of the original shoes from 2011. These have been worn for mountain biking in recent years, but before that they did clock over 2500 km (1560 miles) of use as trail walking shoes. The main source of wear was the fabric lacing system, and extra holes had to be made to thread the laces. This wasn’t really a problem, nor was the wear on the soles, for use as mountain biking shoes. 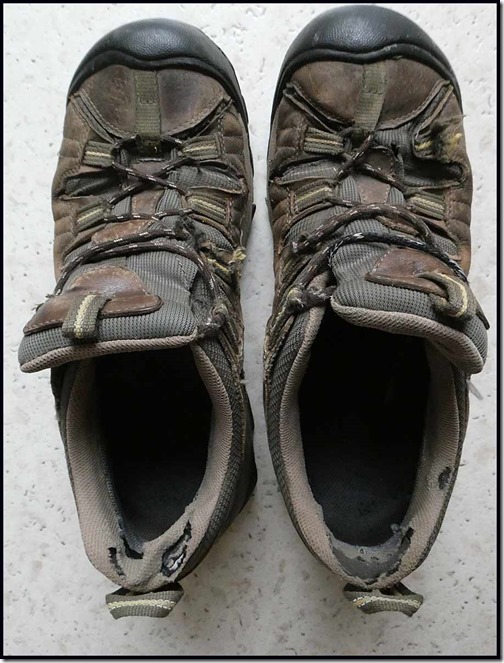 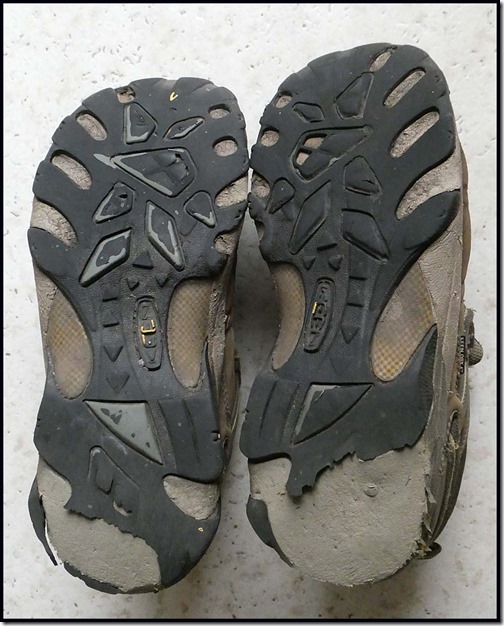 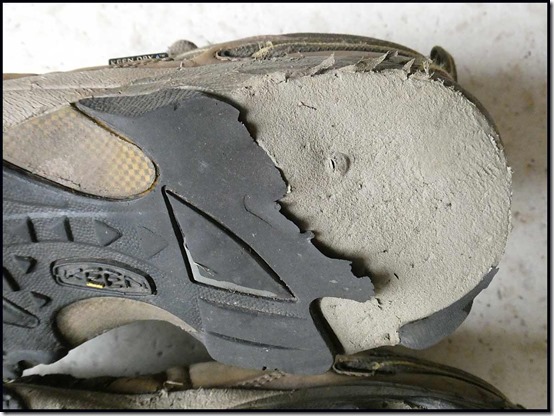 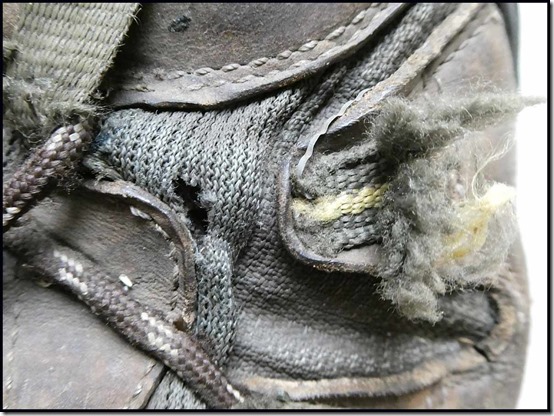 As you can see from these pictures, and given that these shoes cost me nothing in the first place, the shoes were pretty worn and owed me nothing, so after these pictures were taken they were recycled, albeit with reluctance.

I’ve noticed a comment on my original review, suggesting that the quality of some Keen products has deteriorated since then. In the case of these shoes, the second (newer) pair seem if anything to be more durable than the original pair. Remarkable, in fact, as the GR11 route was demanding on the shoes, and my track record for both Asolo and Scarpa three season walking boots is that they last for about 2000 to 2500 km, if anything less than these trail shoes.

This is my last review of these shoes, and I’m unlikely to review any other trail shoes as I can’t really imagine that I’ll find a better product. So as long as you can get them to fit properly using a suitable insole, heel cup, etc, I wholeheartedly commend this product.