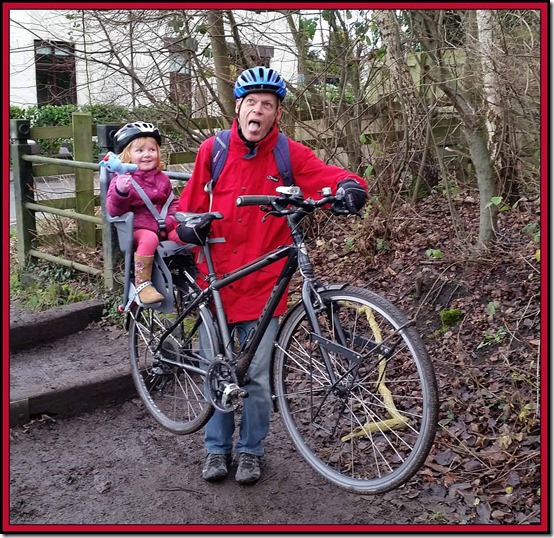 Sue and I were pleased to be joined by Grandad Paul, and Isabella, who had taken a break from looking after Great Grandparents and packing for a long haul trip, to enjoy a gentle ride along the Trans Pennine Trail to Lymm and back.

We met near the (now sadly defunct) Bay Malton hostelry, Sue and I having cycled down the canal towpath from home – just over ten minutes.

We’d hoped to go a bit further than Lymm, but it was a chilly, grey day, and whose hands wouldn’t get cold sitting on the back of Paul’s bike? 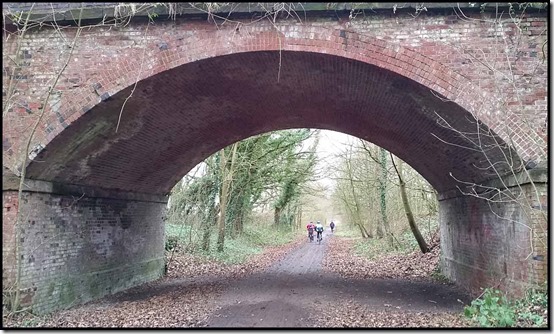 The surface of this cycleway is starting to deteriorate, but it’s nothing like as bad as it was before the major renovation work carried out a few years ago.

The café in Lymm was excellent. A brilliant place to pause for an hour or so before pedalling slowly back to our nice warm house.

On the way we passed the site of the Railway Inn/Hotel that used to host vibrant folk nights but closed a few years ago and was then destroyed by fire in 2011. Since then the building has been demolished and planning applications have been made, rejected, and resubmitted on a smaller scale. The building currently under construction is the result. Interestingly, the Planning Statement says:

‘The applicant has stated his willingness to contribute toward the maintenance of the Trans-Pennine Trail which sits immediately to the north of the application site.’

We’ll see. I’d anticipate that the ‘applicant’ may construct a fence to deter the prying eyes of those enjoying the trail… 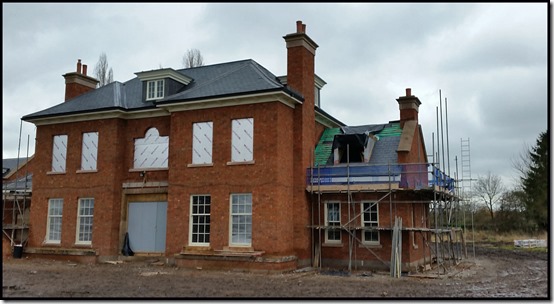 I looked for my old photos of the Railway – couldn’t find them, so I’ve used these images from Google to show what the old place looked like. To be fair, the new structure does show some sympathy with the old design. 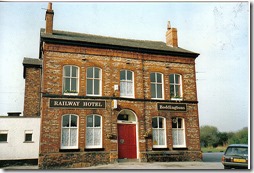 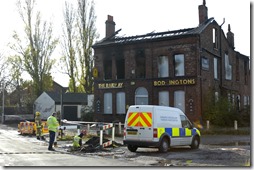 This easy ride covered about 24 flat kilometres and took about an hour and forty minutes, plus an hour in the café. 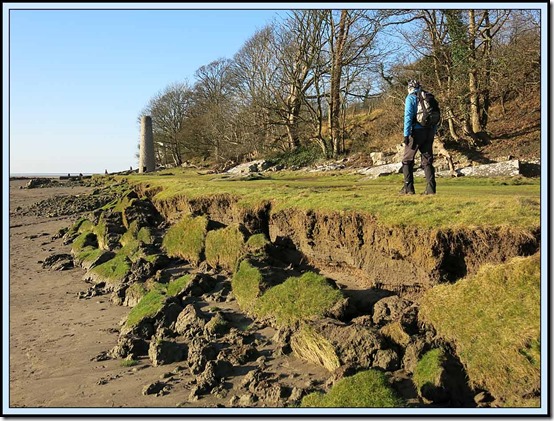 It was a good decision to postpone this visit for 24 hours. We were rewarded with a superb 'blue sky' day.

After another leisurely start we enjoyed coffee and cake at Leighton Moss bird reserve visitor centre, leaving it at around 11 am for a clockwise 19 km stroll around the coast to Silverdale, over Arnside Knott, down to Arnside and a bit more coast, then cross country past sunset at Hawes Water to a pot of tea at the visitor centre before it closed at 4.30.

There were many people about and the paths are well used by locals and visitors alike. Thankfully not as muddy as those around Alderley Edge, and the planning regulations seem to be more sensible here.

The top picture shows me approaching the old Smelt Mill Chimney at Jenny Brown’s Point, after which we meandered through Jack Scout, where the sun shone on these seed heads from a deep blue sky. 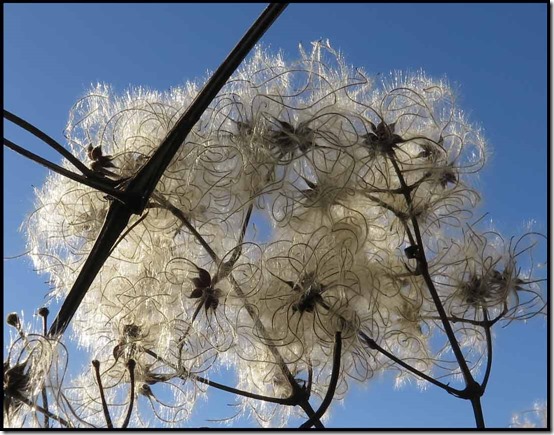 Both Wolf House Gallery and the Silverdale Hotel were closed. Perhaps they hadn’t realised that this Monday was a Bank Holiday on which they could have made good profits had they been open.

We’d anticipated our usual haunts being closed, so, with the tide out, we wandered along the slippery shore line to the cove. 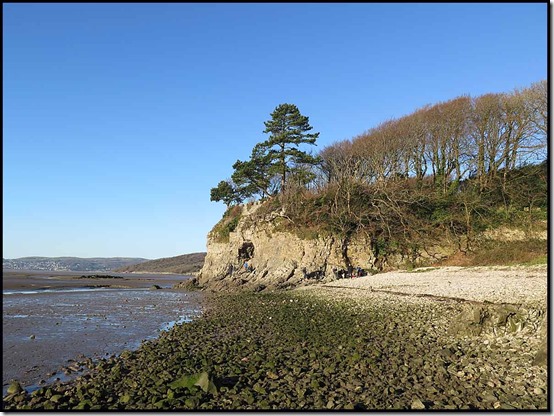 There’s a bench, just out of shot to the right in the above picture, which makes an excellent luncheon venue. 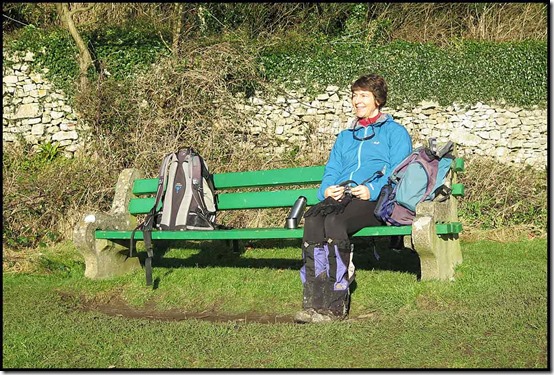 Here’s the view over Morecambe Bay from the bench. You can see the Power Stations at Heysham on the horizon. 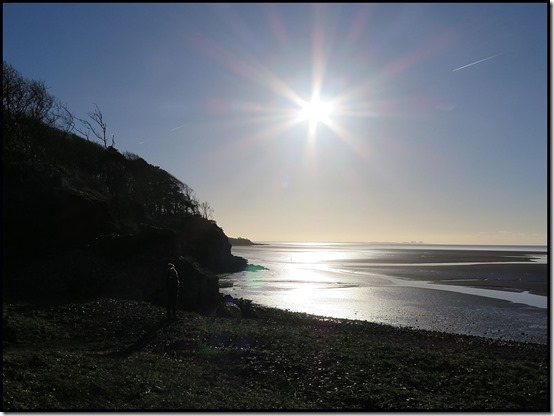 The robins hereabouts are not afraid of humans. 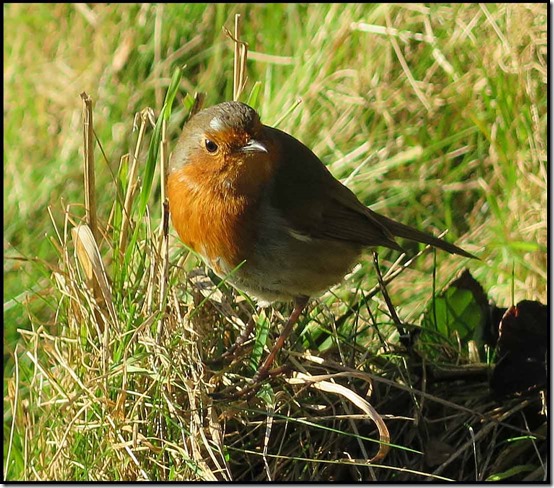 Nor are the mice. This is one of a pair who were busily constructing a nest in a wall. They ignored our attention, but if we had picked one up I expect a sharp nip would have been our reward. 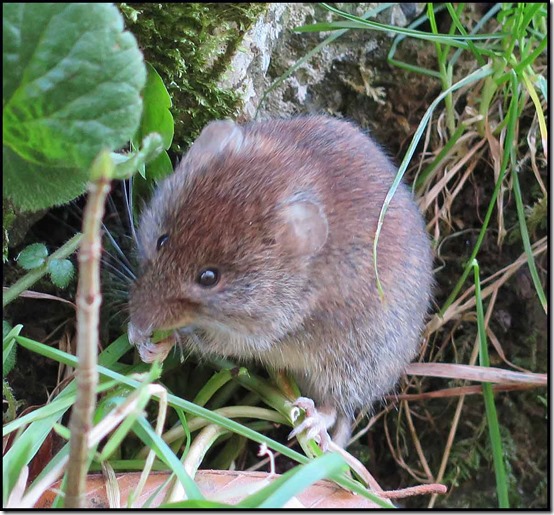 Sue paused on the ascent of Arnside Knott to attempt some artistry with the frosted leaf litter. 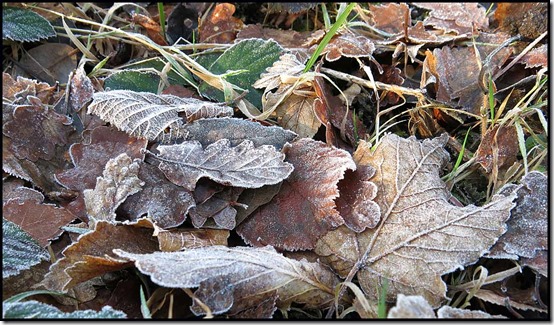 Many pictures were taken from near the 159 metre summit of Arnside Knott. The views across the Kent Estuary to the Lake District were superb, with the higher summits such as Helvellyn and Skiddaw tinged with snow. 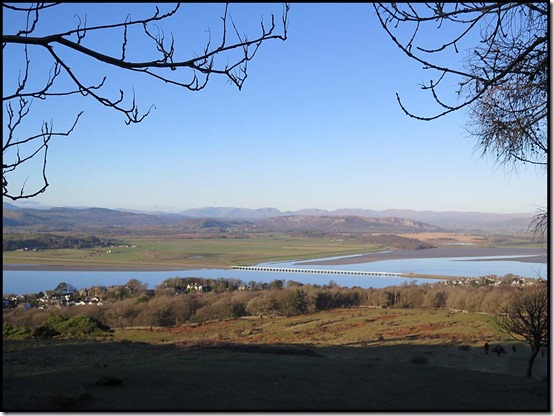 Our friends in Arnside – Conrad, and Ian and Rona, were all away, so sadly we passed Conrad’s local Spar shop and Ian and Rona’s house without the pleasure of seeing them. Though a stop of any consequence would have seen us finishing in the dark. The sun set as we passed Hawes Water, still with half an hour to go. 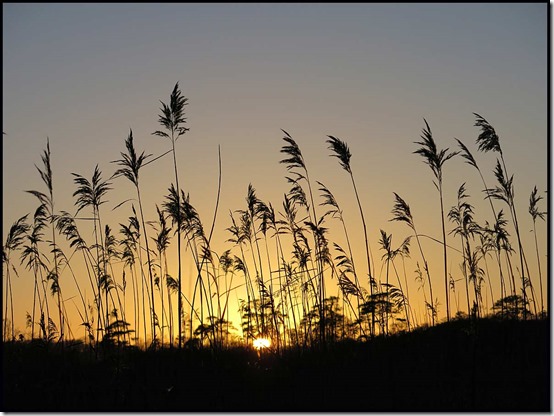 The bird watchers were still present in abundance as we approached the visitor centre well after dusk. We weren’t on a bird spotting mission today, but we did notice a Great Egret near Hazelslack.

Here’s our route – 19.5 km with about 400 metres ascent, taking a little less than five and a half hours. 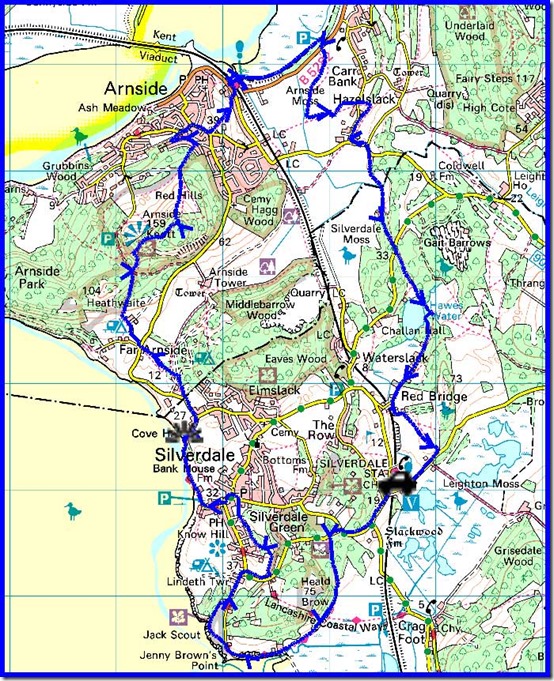 I’m posting this to avoid getting too far behind. A slideshow will follow, and notes of birds and wild flowers observed this year. (Good intentions, anyway!) 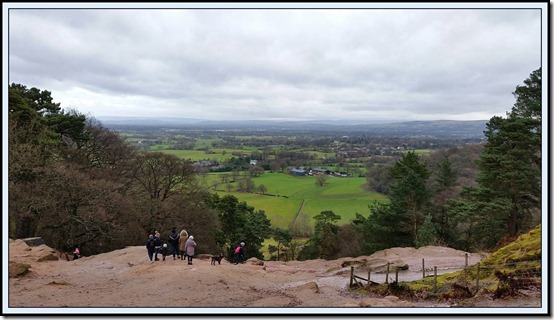 A rainy morning led us to revise our plans for the day. Silverdale could wait. So Sue and I waited for the rain to ease after lunch, before setting off to Alderley Edge. As expected it was busy on the Edge, but quiet in the muddy Cheshire fields below. Those green swathes in the view from the Edge above, are full of wetness.

Eventually the sun came out and gave us some pleasureable views towards the skyscrapers of Manchester, sufficiently distant to avoid being an eyesore, with the masts of Winter Hill visible in the distance. 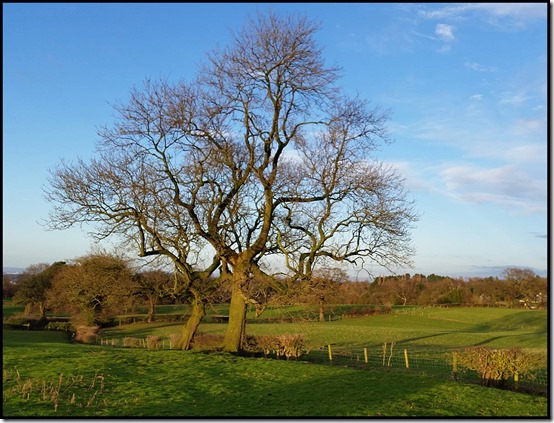 Today we took a shorter version of the walk I enjoyed on 1 April last year, taking the Bollin Valley Way route past Mill Farm. On previous visits this path has been closed due to a landslip into the river, but it’s fine now, and a pleasant walk that skirts the Mottram Hall golf course before rejoining our previous route by a footbridge.

My notes from 1 April record our passing the groundworks for a new residence, which presumably replaces some old barns that meshed well with the landscape. In their place, the O’Connor £millions are constructing a palace that will have great views to the Edge and the Cheshire countryside. It’s a Blot on the Landscape that must be quite upsetting to some of its less ostentatious neighbours. 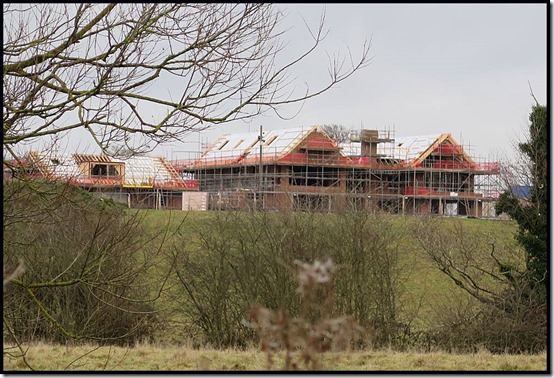 Our walk proceeded through pleasant, if muddy, countryside towards the Edge, but the last few km towards the Wizard were further blighted by a huge green fence surrounding more extensive building work. How people manage to get permission for this wholesale destruction of the landscape I really don’t know. 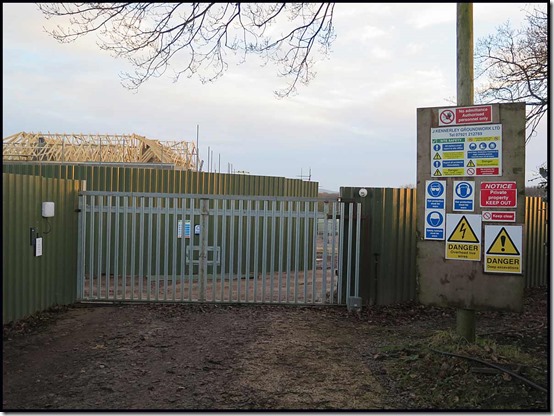 Ah well, at least we don’t have to live nearby, and given the number of people and the amount of mud, I think visits to this area might be reserved for dry summer midweek days. Hopefully the construction sites will be sanitised. Anyway, there are plenty of other places to go for a walk…

Having said that, we did have a lovely stroll apart from the eyesores and the mud. 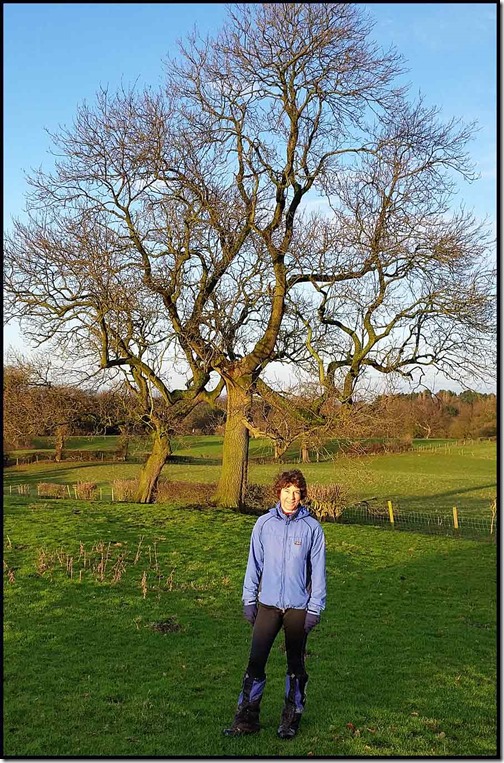 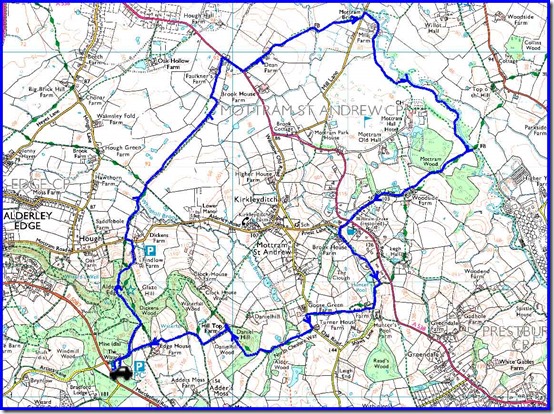 On relection, we made the best of the day – start the year as you mean to carry on…

Posted by Phreerunner at 11:39 No comments: 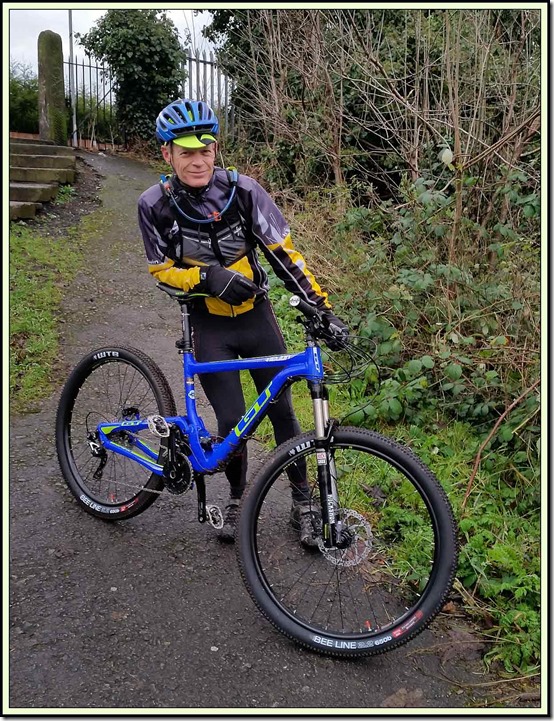 Sue and I were up at 7.45, in time to pedal down to Wythenshawe for the parkrun. 5.7 km in about 18 minutes. My route is shown, it’s a pavement and minor roads route, whereas Sue takes the main roads. 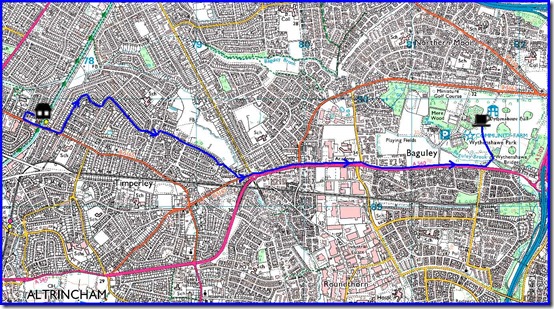 Due to a calf strain, I volunteered to run at the back of the 276 participants who turned up today. A plump lady called Zoe was taking her first short steps in trying to get fitter. A group of five encouraged her around the 5 km course, which includes two laps of the bottom loop shown below. Chatting with stalwarts, Ralph, Ron and Claire made the slow pace bearable. A stroll in the park in good company, with coffee from a flask and cake from a tin at the end, as the Courtyard café is on holiday. My time of 55.58 was not the fastest for a 5km run! 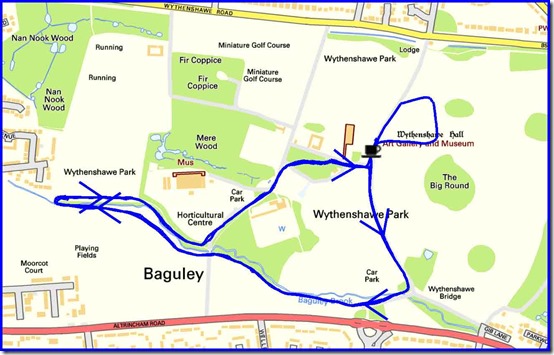 Then came the energetic bit. Paul wanted to give his new mountain bike (he’s pictured with it above before it got too muddy) an outing, so I pedalled back to the canal at Brooklands, then down to the Bay Malton to meet him and son Greg. We went back along the canal towpath, leaving it at Stretford for a convoluted route to the Jackson’s Boat bridge, before joining the Fallowfield Loop route along the disused railway tracks, through increasing amounts of rubbish to Gorton and on to join the Ashton Canal near Sports City. From there we followed the canal as best we could, despite a diversion along Whitworth Street, all the way home for me, and home via the Bay Malton for Paul and Greg. I did 49.5 km, and by the time they got home, Paul and Greg had probably done something similar. Here’s the route – if you click on the image it should go a bit bigger. There are a multitude of routes around here, but the Fallowfield Loop is worth a try for an easy off-road jaunt. 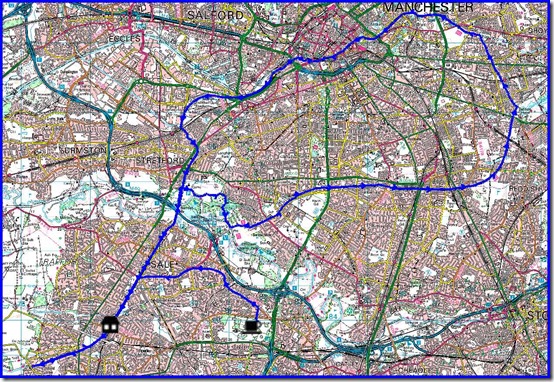 Have a great New Year…

[Homework for Paul: go back down to the bridge at Watersmeet and try to go over without falling off!]