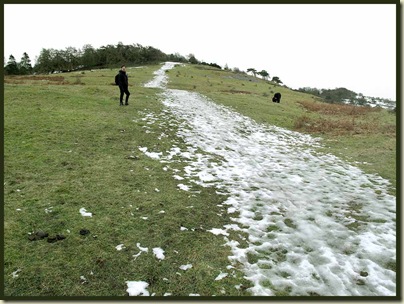 It’s a year since we waved Nick off to Shanghai.  Today’s plan to meet him got off to a poor start when Sue’s illness prevented her departure from Timperley, but Nick was ready and waiting by the time I arrived at Leighton Moss RSPB’s skating rink of a car park soon after 9.30.

Another gent wandered (well, slithered) up….

“Hello Mark, good to meet you”

Mark is the author of the excellent ‘Beating the Bounds’ blog and had taken the trouble to come along and say hello.  It’s always good to meet such people who have become ‘on-line friends’ in the flesh, and the three of us (Nick is also familiar with Mark’s writing')  enjoyed a lengthy tea/coffee break in the café, before Mark headed off home to confront some domestic duties.

Nick and I set off along basically the same route that I walked with Susan on 28 October – reported on here and here, in dull, cold weather.  It was not a day for stunning images of Silverdale – you’ll have to visit Mark’s site for those, but we did enjoy a good chat and were able to catch up on the year’s activities.

Lunching on a bench near the summit of Arnside Knott, we were glad we hadn’t attempted anything more ambitious, as the conditions in the Lake District looked as if they may not be so amenable for the ‘cosy chat’ that we were enjoying. 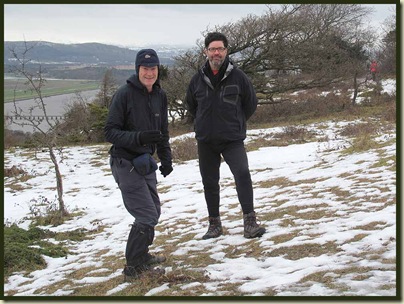 The caravan park at Far Arnside was quite busy with holiday makers as we passed through en route to an alpaca farm, Silverdale village, Woodwell, and the fleshpot known as the Wolf House Gallery.  Their tea and cakes were up to the usual high standard and we enjoyed a long break in the warmth of the café.

Then we braved the full force of the brisk arctic wind for our stroll back to the RSPB car park, arriving well before 4 pm after a very pleasant day’s stroll.  We had been expecting either ‘light rain’ or ‘snow showers’, depending on which forecast we’d looked at.  So we weren’t complaining about the cool east wind that had substituted for these forecasts. 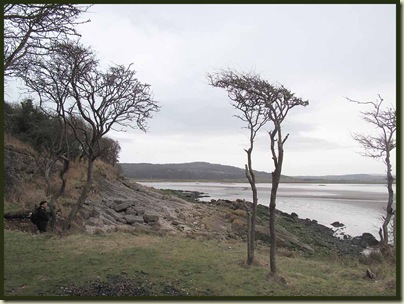 My photos were some of the worst I’ve taken this year, but (mainly for Nick’s benefit) I’ve uploaded them to a slideshow that can be viewed here.

Here’s our route – 17 km, 340 metres of ascent, in around 5 hours including stops.  It was the last trip for my Hi-Tec boots, which effectively fell apart; a review will follow. 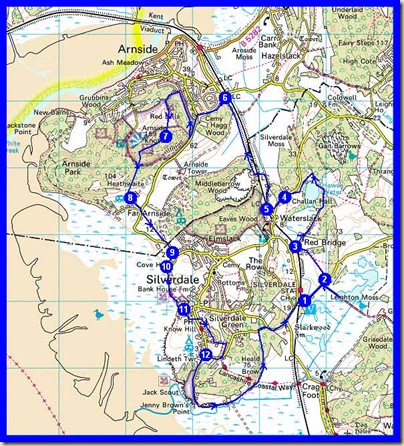 That’s it for 2009, this being our 386th and final posting for the year.  Sue and I hope you have enjoyed at least a small fraction of these ramblings and that you will join us again, on-line and/or in the flesh, in 2010.

Wishing you all a happy and healthy, even Adventurous, 2010!

An easy route from Bill Birkett’s book - ‘Great British Ridge Walks’ provided the inspiration for today’s trip to snowy Wales, triggered by messages from The Pie Man about his Snowdonian ridge walking ambitions.

I’d forgotten all about the planned walk with Alastair until he called on Monday evening:

‘Hmmm’ I thought.  ‘The conditions may be interesting, should I go anyway?’

No destination had been planned, and I needed to be home before
4 pm, but page 17 of Bill’s book provided a suitable answer, with a walk of only 8-9 km, ascent of around 730 metres, and timing estimated at 4 hours.

So the following morning I brushed the sleep from my eyes, optimistically shoved crampons and ice axe on board, and headed off down the M56. Chester was reached by the time I realised I’d brought no money.  I’d have to drive slowly to preserve fuel, and miss out on a mug of tea at Ogwen Cottage, but my main concern was the state of my low reserves of screen wash, without which driving would be a little difficult!

Anyway, I pressed on and by 9.30 I was staring at this view of the rift directly above Ogwen Cottage. 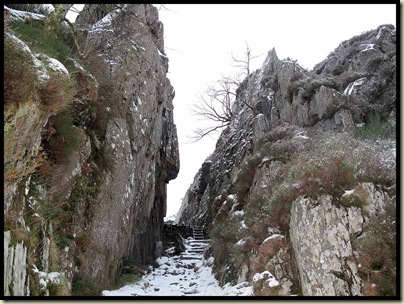 The slatey shaley rock from this ‘Quarry Canyon’ was taken many years ago for use as a whetstone material for sharpening steel, and on warmer days school children can be found here, learning the rudiments of rock climbing.

It was a delight to hear the creak of fresh snow under my boots.

Above the steps the path flattens out for a while, heading towards a ladder stile that leads to this gentle slope on the approaches to the north east ridge of Y Garn. 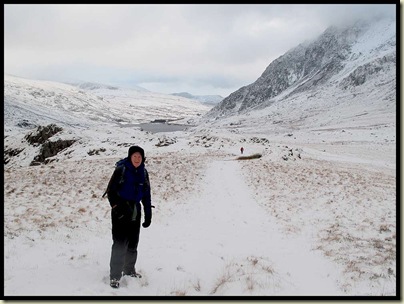 Llyn Ogwen comes into view far below, with Lynn Idwal nearby to the left as you ascend.  The going in just a few inches of freshly blown snow was easy.

Soon the steeper slopes of the north east ridge made for slower progress, especially as frequent stops were needed to admire the views.  Around 700 metres the snow was firm enough for crampons to be of benefit, so on they went, for the first time this winter.  I think it was the first time I’d attached them to the leaky old Asolo Fugitives (no chance of a leak in today’s temperatures – the boots were worn for comfort) and they worked perfectly on this walk. 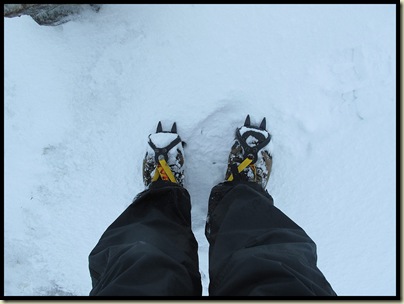 Here’s the view from this spot, which was just below the cloud base. 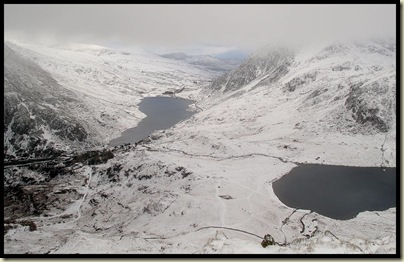 Then it was a case of sticking to the rocky crest in order to avoid drifted snow on the snow laden route of the normal path.  The views came and went, and whilst there were patches of blue sky there was a fresh breeze which made it hard to distinguish between the swirling cloud and the spindrift.

At the 947 metre summit, the spindrift prevailed… 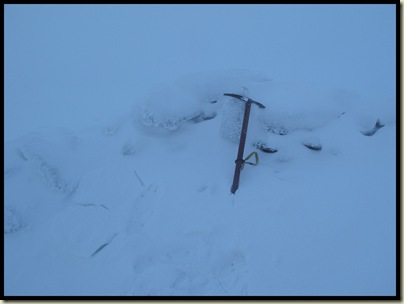 A pleasant descent started beside the cliffs of Y Garn’s eastern face before turning SSE to emerge from the clag above a familiar looking stile.  Despite there being a few people out today, the fresh dry snow and the mountain breeze conspired to eliminate any sense of a track until The Devil’s Kitchen was reached, revealing a well trodden but very slippery thoroughfare.

Climbers were playing on the sheets of ice that were draped across the entire Cwm. 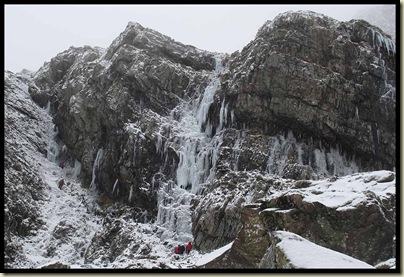 I kept the crampons on until below 500 metres, where I stopped for lunch – and their removal – in a calm spot with this fine view across Llyn Idwal to Pen yr Ole Wen. 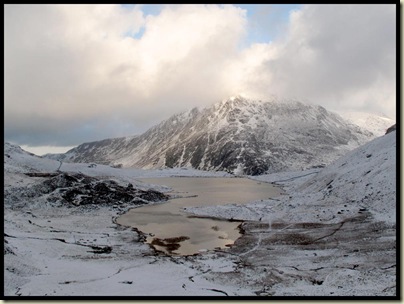 Following the path below Idwal Slabs, on the east side of Llyn Idwal, there were good, if monochromatic, views of the slabs, and of Tryfan as it slowly crept into view, draped in cloud.

Below Llyn Idwal family parties frolicked in the winter conditions, this chap rather foolishly showing off by wearing shorts.  I was later to hear of men in t-shirts and jeans having been rescued from the nearby slopes of Snowdon. 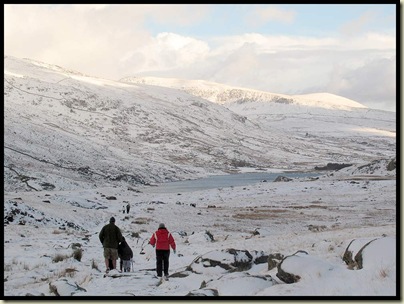 By the time I’d reached the shores of Llyn Ogwen, Tryfan had freed itself from its shield of cloud. 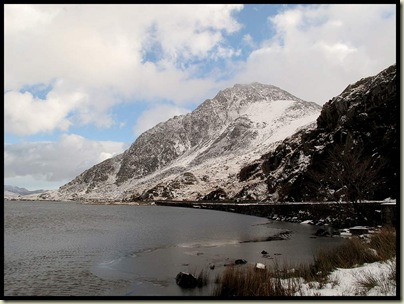 I’d enjoyed a very leisurely outing in lovely winter conditions (Trekking Britain – you set off in the wrong direction!) and was back at the car well within 4 hours, and back home, after another easy journey, by 3.30, managing somehow to avoid the gridlock in Altrincham caused by the day’s fresh snow.

I took 24 photos, which can be viewed in a slide show here. 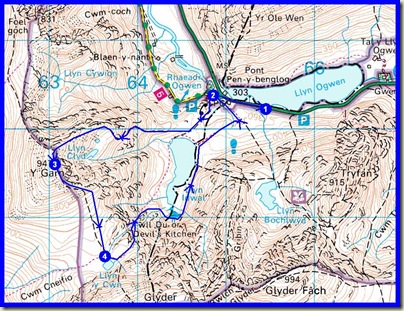 “I’ll just pop out for the paper” announced mother.

I looked out of the window to see pedestrians negotiating our pavement in the manner of novice skaters at the Silver Blades ice rink.  Except that the fence at the rink is higher than the walls down our road, and it doesn’t have gaps for driveways. 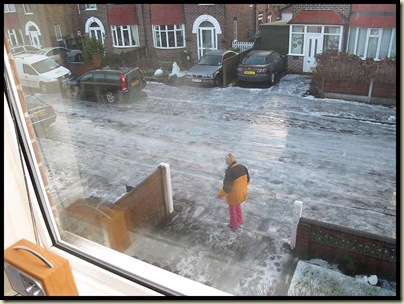 Mother was not permitted, on this occasion, to go through with her death wish.  I would fetch the paper.

This required Special Equipment.  I’m not sure whether the people in the Spar shop appreciated the spikes, but these crampons are rather less aggressive than those used four days earlier (report to follow).  They were however, in truth, more necessary today. 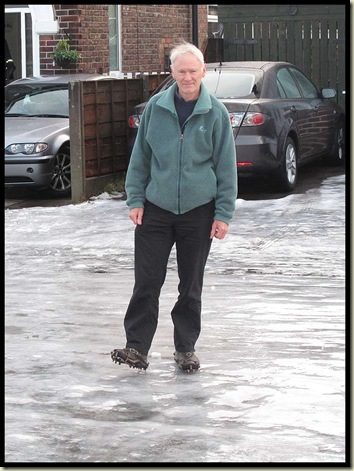 There were very few people about from whom to gain admiring looks, but it should be evident from these pictures that today, for one day only, the most appropriate footwear for the streets of Timperley, flat though they may be, was crampons!  A first. 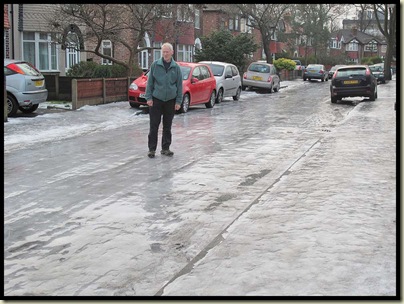 Firstly, a bit of a Grump.  I hope you don’t mind.  This posting would have been made around noon yesterday (27/12) had my computer not suffered a violent attack from spyware known as ‘Antivirus Live’.  I think it must have arrived from a ‘banner’ on a website I had open at the time.  It completely evaded the ‘Zonealarm Extreme Security’ that I installed after the last, much less invasive, virus attack from ‘Shield Safe’, another evil thing that I removed a few weeks ago with assistance from Darren, Alan and Robert.  It has taken many hours of effort to remove (if only temporarily?) this latest spyware, and it has stretched my computer know how, such as it is, to new limits.

I was going to thank the above-named for their earlier help, and now I do so again, as without that help I wouldn’t have had the confidence to tackle today’s problem.

There is a Lesson to be Learned.  Don’t leave websites that stream advertising ‘banners’ open on the desktop, however reputable the host site may be.

Anyway, back to the intended topic, our Christmas Eve walk.  We were planning to go to Styal, but given the icy conditions, and the presence of an 84 year old in the party, we decided on the flat grounds of Dunham Massey and its surrounds.

So, only four days after our last visit, Sue and I enjoyed the same stroll from Dunham Massey to the Swan with Two Nicks via the Bridgewater Canal, now well frozen and suitable for skating on!

This time we had Jenny (Night Bird) and Dot for company in the snow. 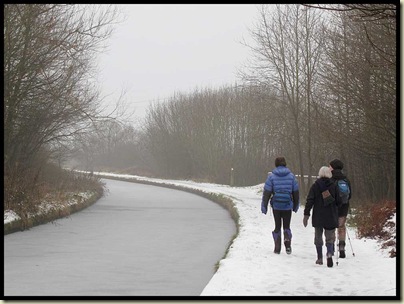 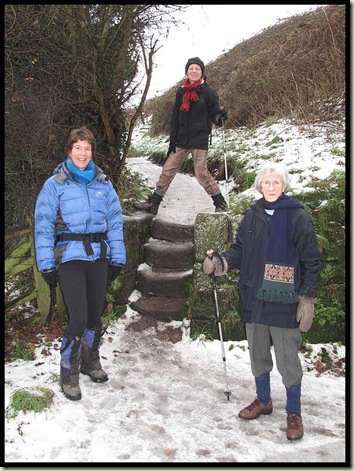 Then it was through the meadows to Dunham Massey House, 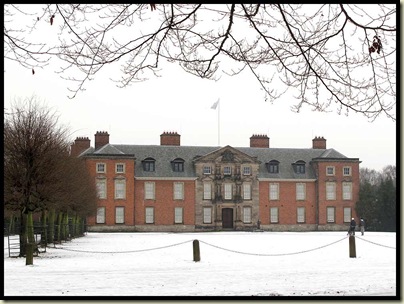 and on along a familiar circuit around the grounds. 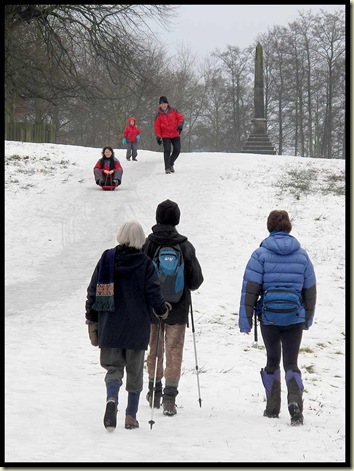 We stopped for mulled wine, shortbread and brownies, of course! 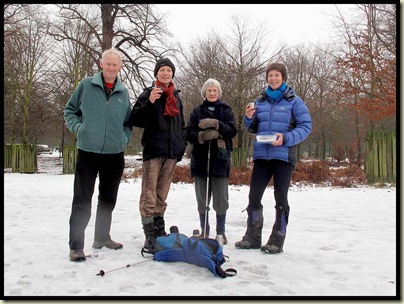 Then paused with many others to admire the fallow deer. 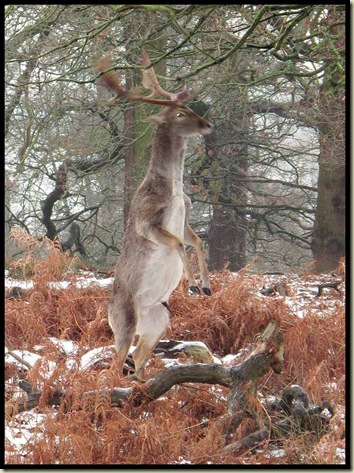 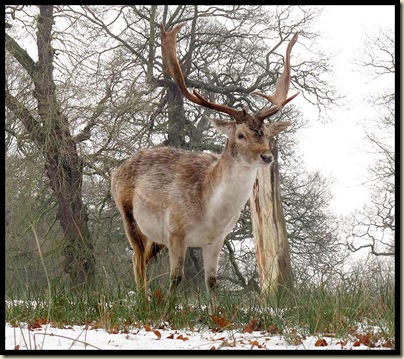 The whole route apart from the descent from the canal was safe despite the ice, so we were able to return intact to enjoy our Christmas festivities, passing the usual selection of bird life on the way back to the car park. 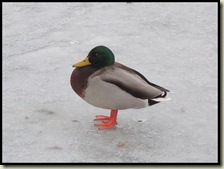 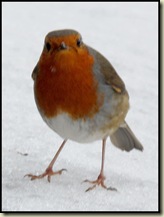 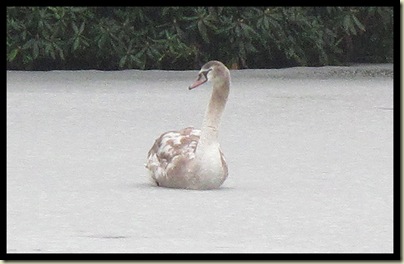 For anyone with an obscure fascination for Dunham Massey, Jamie from Trekking Britain went there two days earlier and took these photos.