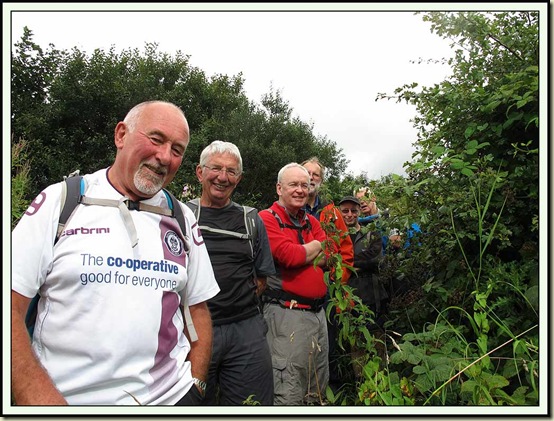 It was a pleasure to join ‘The Plodders’ today after quite a long break.  They have been doing, amongst other things, the Irwell Valley Walk from the river’s source to the point where it imminently mutates into the Manchester Ship Canal.

The 50 minute tram ride from Timperley to Bury was very pleasant in the sunshine, so I was somewhat surprised to find others dressed in waterproofs.  No matter, I’d brought the sun with me – a fact that some of the assembled masses failed to notice until their waterproofs were about to be ripped to shreds in Bury Jungle. 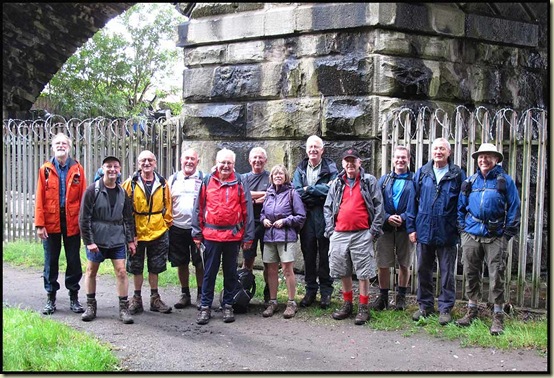 Anyway, we lined up for a mug shot – two Rogers, John, Don, Reg, Phil, Little Ann, Peter, Jim, Bernard, Dennis and Alan, if I’ve got that right.  Then Reg set off purposefully in search of the River Irwell.  We couldn’t see it, but we could see the Metrolink line to our left, so “we must be roughly right”.

“We need the canal towpath” announced Reg - “it’s just down there, you go first, John.”

“What, through that forest?”

“Yes, here are some wire cutters, and would Bernard please pass his walking stick.” 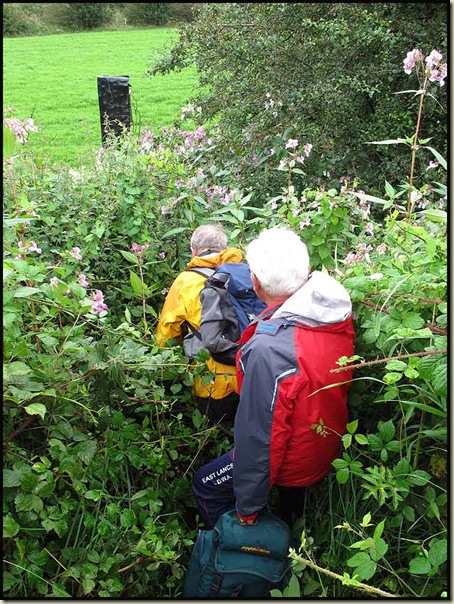 We spent some time in this short section of jungle, with its spiky brambles and stingy nettles.  There was a vertical section, lined with brambles, nettles and Himalayan Balsam.  So what to hold on to, given that the innocuous Balsam doesn’t exactly provide a solid grip?

The jungle exited into a flat field, but as you can see from the following image, two strands of barbed wire could easily rip the knees.  We couldn’t really complain about the wire, as we weren’t exactly on a path… 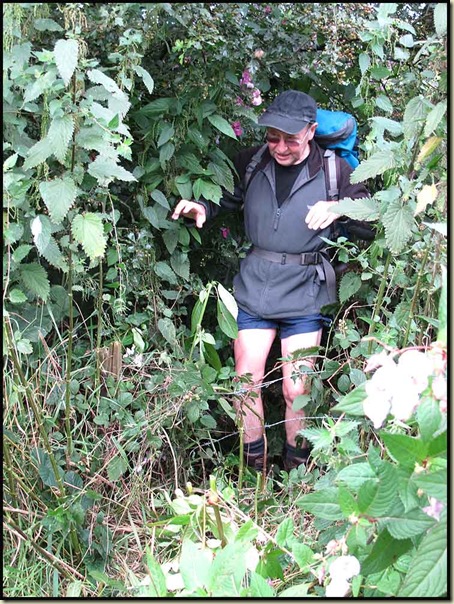 After rescuing Little Ann, who had tried to hitch a ride in Bernard’s rucksack, from the depths of the Jungle, we managed to extricate all 13 of us and find the canal towpath, where we were buzzed by grey wagtails and were closely vetted by some puzzled looking swans. 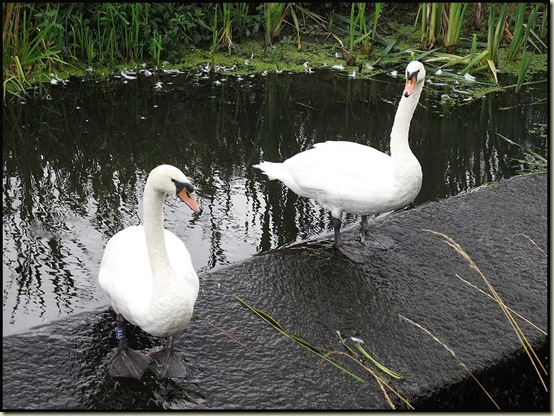 Little Ann, apparently dazed by her Jungle experience, paddled into the middle of the canal with my camera to take the following picture.  Thanks Ann, I didn’t tell anyone you thought the grass in the canal was dry!  You seemed a bit dazed and may not even recall the episode at all… 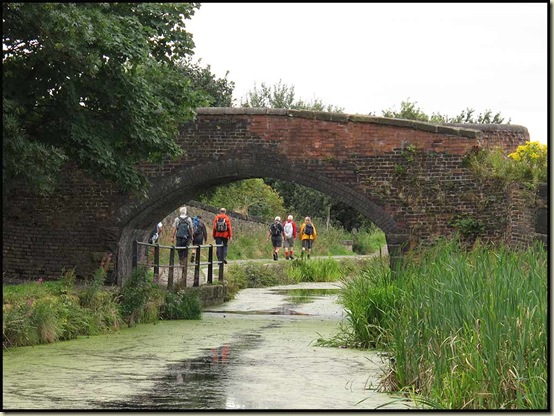 The next pair of swans seem to have had a (re)productive summer. 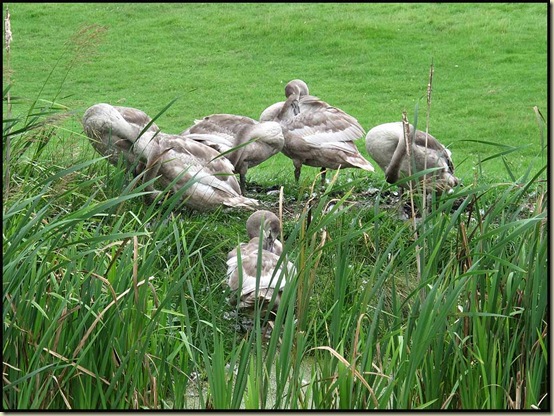 Eventually, Reg got bored with the towpath and took us down a track under a tree viaduct.  Those of us who didn’t bother with hats got sunburnt. 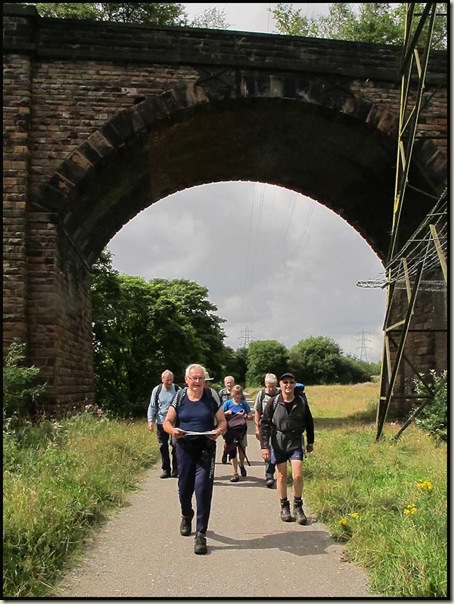 Incredibly, we spent some time on the Irwell Valley Sculpture Trail without finding any sculptures.  We did however find a few rocks on which to enjoy a speedy lunch and a second round of brownies.  Eventually a rather dilapidated piece of ironwork sculpture appeared, and Reg breathed a deep sigh of relief when he finally located the River Irwell, which he then insisted on crossing several times. 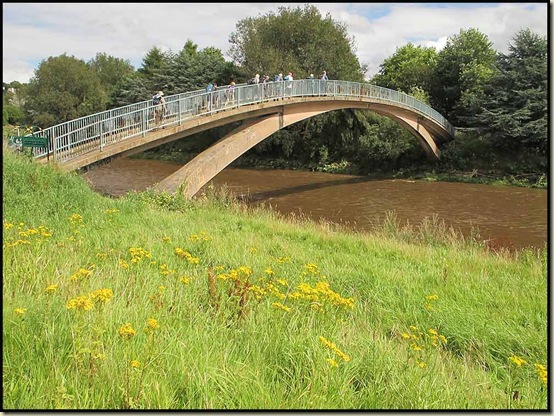 The fleshpots of Salford were gained in the vicinity of The Crescent.  Some of these have seen better days. 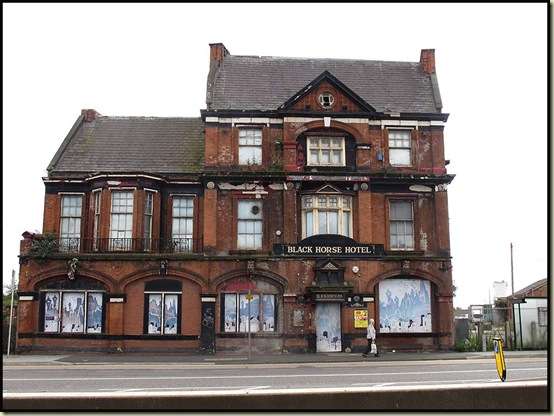 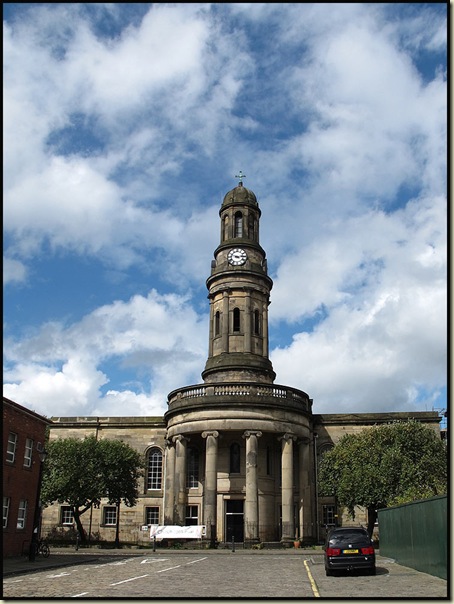 During the speedy lunch, Reg had been busy ordering a second lunch of sandwiches, salad and lots of chips at the Mark Addy, which we needed in order to provide our beers with something to wash down. 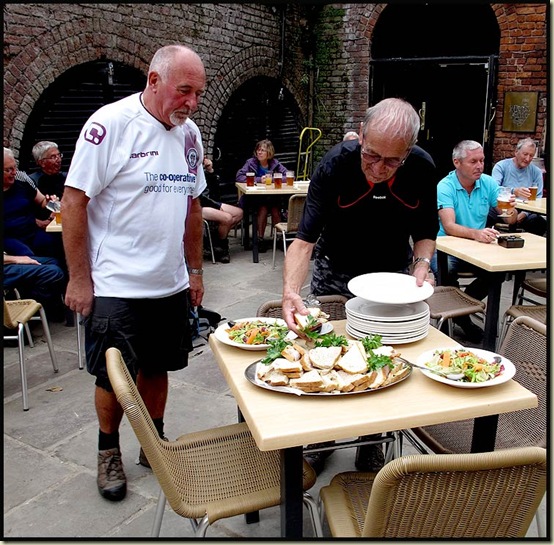 Here’s an approximation of our 20 km (12.5 mile) route, which took us about 5 hours.  Bury Forest is positioned somewhere between points 2 and 3, but its exact location remains Reg’s secret.  The River Irwell turns into the Manchester Ship Canal at some indeterminate point just beyond the Mark Addy pub. 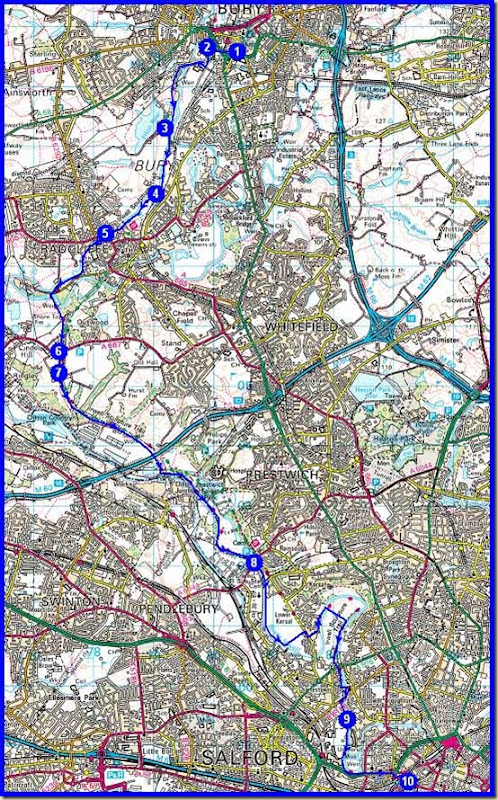 There’s a slide show with more ‘Forest’ pictures here, and my Garmin gadget track of the route is below: 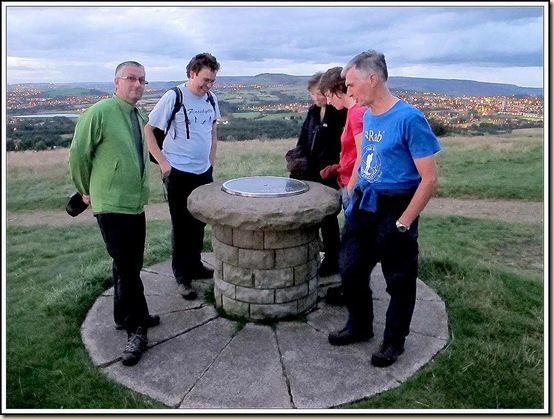 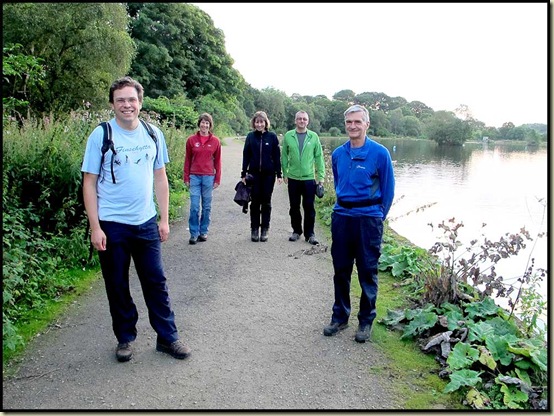 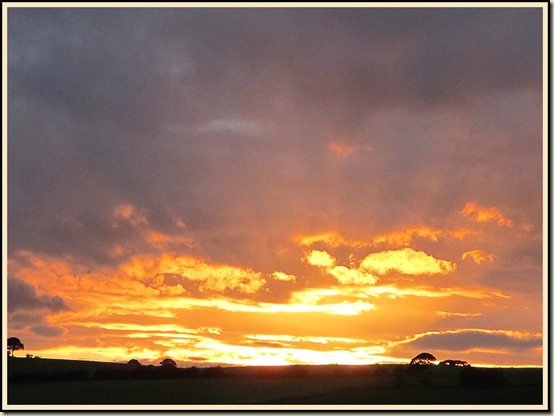 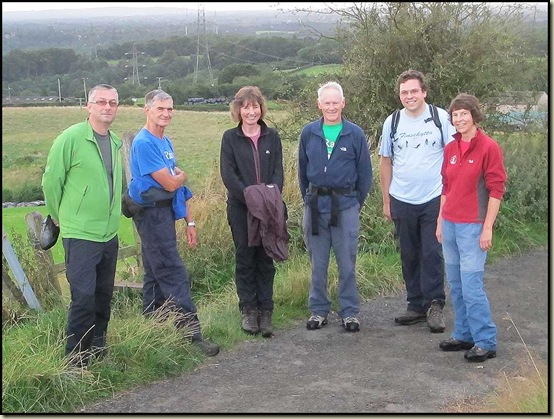 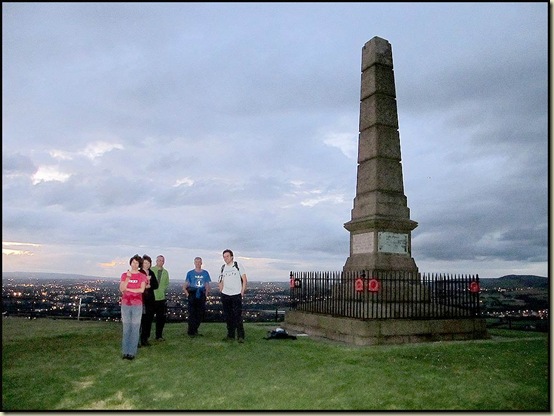 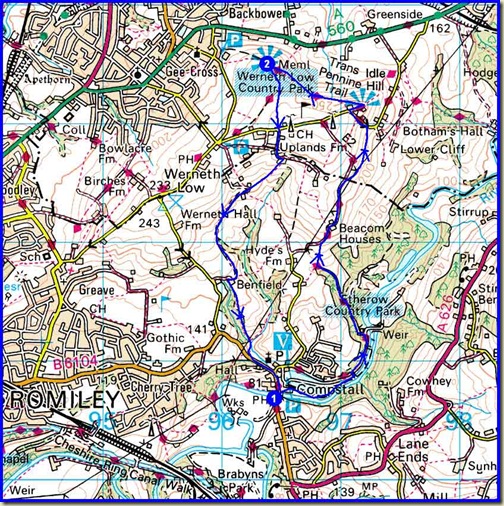 Posted by Phreerunner at 17:21 No comments:

Will and Geri get married 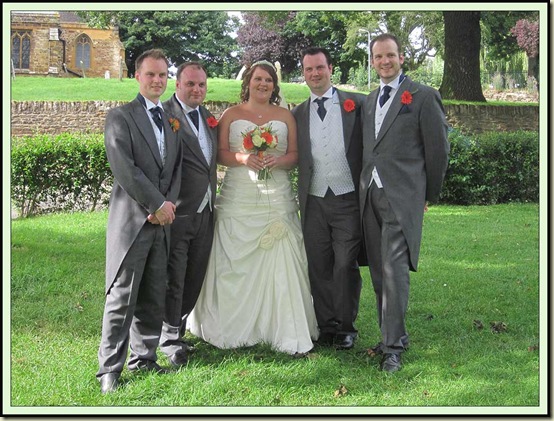 We had a lovely time at Will (my nephew) and Geri’s wedding in Northampton yesterday, and very much enjoyed our day with my brother Dave’s family, some of whom appear above.

Have a great honeymoon, Will and Geri, and we hope to see you all soon.  (Some readers may remember Dave and Toby from last year’s Christmas walk up Shutlingsloe.)

Posted by Phreerunner at 23:05 No comments: