Swine 'flu, a fine camera and the TGO Challenge

Now, these topics aren't related, but they are current.

Want a good camera?  Have a look at Bill Lockhart's blog for his first impressions of what looks like a nice piece of kit.  A 'trifle' expensive though.

Bill's 'Visions from my world' video is well worth viewing.  I won't embarrass myself by adding an image to this posting, I'll leave you to click on Bill's images, which are in a different league.

The TGO Challenge.  It has come up as our next trip, so I have to busy myself over the next few days finalising our route, buying train tickets, sorting accommodation, printing some maps, gathering provisions, and throwing some kit together - I hope there's no need for anything new, as I suspect it wouldn't arrive in time.  I just hope the Toughprint paper turns up.

So these pages may go a little quiet for a few days - but I do soon hope to provide some route details.

Wednesday 29 April 2009 - Deepest Cheshire, from the Drovers Arms, Over Peover

Here's another good old English name for you, Mike.  Actually, the Drovers Arms is situated half way between Over Peover and Lower Peover (aka 'Superior' and 'Inferior').  The 'o' is pronounced as an 'e'! 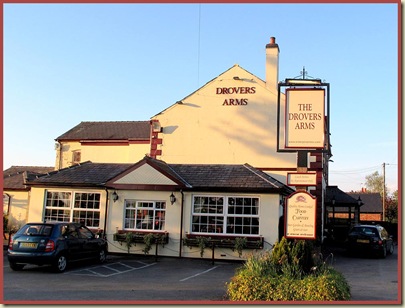 We arrived half an hour early for this evening walk, so with plenty of time to sample the 'Black Sheep' ale.

Andrew had been inexplicably passed in a lay-by. He is usually in-situ at the start point, enjoying a beer.  "Attending to important business", I surmised, or "reccying the route".  (Andrew was tonight's leader, and he likes to be well prepared...)

We were greeted, entirely unexpectedly, by Ian C - one of my old UMIST contemporaries.  He works nearby and had made good use of the Drovers 'Early Bird' menu to fuel himself for his first appearance on one of our walks for several years.

Andrew lumbered in and downed some ale whilst breathlessly explaining "...eating my tea...important business...reccying the route...".  Retirement sees him as busy as ever, bravely multitasking whilst fervently attempting to keep all his balls in the air.

He led off into a field.  "Keep low" he advised, "as soon as they spot us the six horses will gallop towards us."  He had done his homework - they did just that; they just wanted to be friends with us. 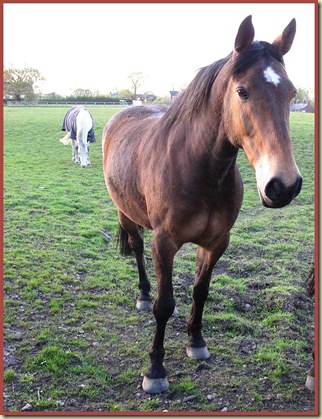 The route took us along quiet lanes in the late sun under a darkening blue sky.  Richard had 'joke fever' - it's a shame I can't remember any of them (well, on second thoughts!), and Jenny and Andrew had developed strange walking styles. 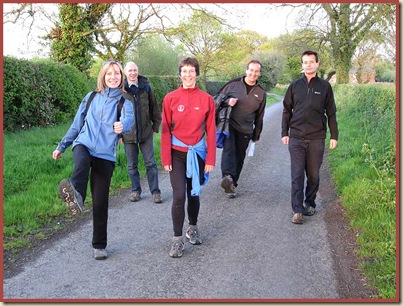 The hedgerows and woodland paths now bulge with garlic mustard, greater stitchwort and yellow archangel, as well as the violets and anemones that have accompanied us over recent weeks.  The woodland areas have swathes of bluebells, and in the fields the dandelions are nearly over. 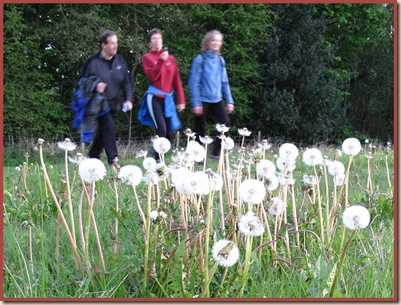 We discovered that Ian had joined us simply to escape from his mother in law, and that Andrew knew the area well - he kept darting off the main paths to avoid boggy sections that he blamed on 'The Hunt'.

Past extensive glass-houses full of chrysanthemums we strolled, under huge trees with noisy birds - buzzards, crows and pigeons, near the converted barns that Andrew so despises, and beside a country residence with a helicopter and more friendly horses outside.

Dusk fell, over lush woods and Cheshire fields, some deep with growth, others sporting brown scrub and a tree-laden skyline. 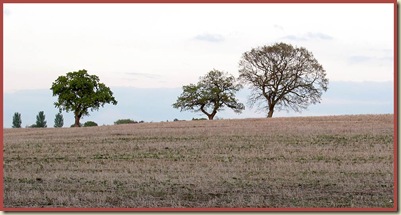 Luckily the fading daylight and the crescent moon provided sufficient light for the torch batteries (yes, we had one torch between 6 of us) to be utilised in Andrew's failing GPS unit, which seemed to hold the key to avoiding a night out 'lost in Cheshire'!

The Drovers Arms was dark and empty when we returned, but a barman appeared to serve us before locking up as we left at 10 pm.  As last week, we were the only customers after returning from our evening walk, and the future of some of these pleasant country pubs is starting to become a worry.  They need more business.

Tonight's 8 km route with minimal ascent (it's the Cheshire plain, after all) is shown below.  It took about 2 hours. 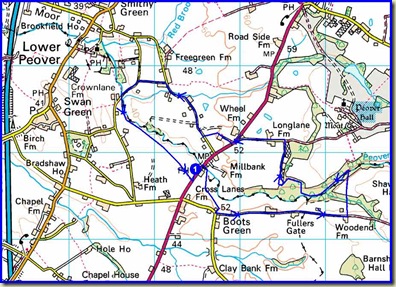 Our evening walks programme is here.  Anyone is welcome to join us.

Posted by Phreerunner at 15:16 No comments:

A Trip to Killin

Sue and I joined Alastair for a regular (annual) 'bagging' trip, during which Al chooses the hills (by definition, ones that he hasn't been up before) and we follow him.

For this trip we were joined by Lyn, who was on loan from her three year old twins.  For obvious reasons (not least the fact that she lives south of Bristol) this was a rare treat for her.

A shame, then that the Mountain Weather Information Service provided a dire forecast, with a 30% chance of clear summits on Saturday and only 20% on Sunday.

An early escape from work for Al saw us chauffeuring him up to Glasgow whilst he chattered away on Important Business, in the back of the car.

Easy-jet had delivered Lyn early, so her pick up was perfectly timed, and the fish 'n chip shop at Callander provided sustenance, followed by the Killin Hotel's Ossian Ale.

Meanwhile we had disembarked at Fairview B&B, a fine establishment where Julie and Dave, also on this trip but with their own 'bagging' agendas, were also ensconced. 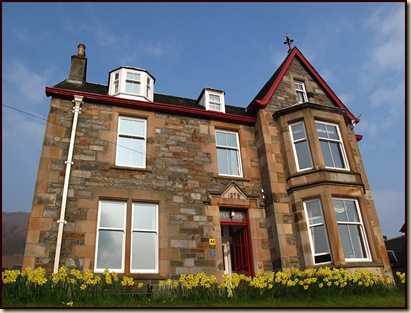 This B&B has a spacious lounge for guests, with wine glasses thoughtfully provided.  Luckily we had the means to fill them...

Saturday 25 April - Creag Mhor and Beinn Heasgarnich ("I can't pronounce that, either" said our landlady, "and I've lived here all my life!")

A short drive up Glen Lochay saw us parking at Kenknock in a wide area inhabited by cows and calves, and our stroll started gently along the private road up the glen to Batavaime.

A huge pipe approached us from the north, and disappeared over a mountain to the south. 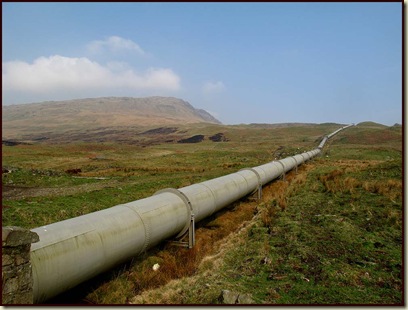 Beyond Batavaime we enjoyed the last bit of tarmac for a while before heading steeply up the soft ground that leads to the pleasant, broad ridge of Sron nan Eun. 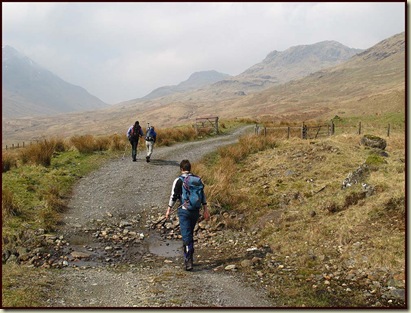 Dog violets and dung beetles adorned the hillside, and these wood anemones were soaking up the unexpected sunshine. 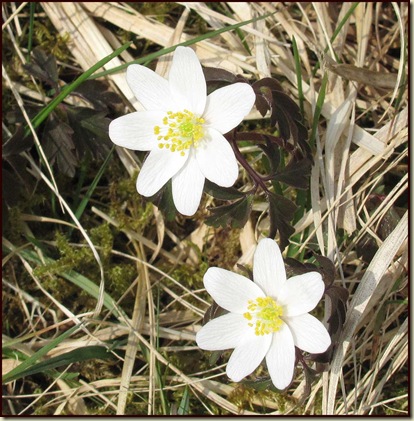 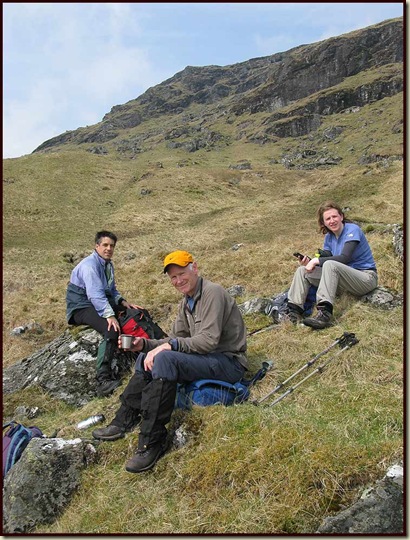 After a flat section along Sron nan Eun the ridge steepens again, up to the 1047 metre summit of Creag Mhor. 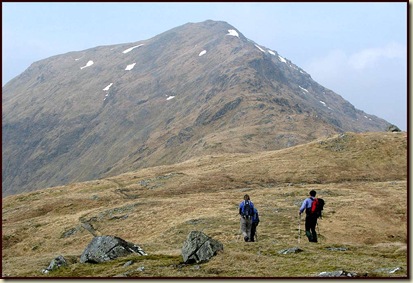 Just beyond the summit, lunch was taken in a sheltered spot, Al taking the opportunity to delve greedily into his Scotch Egg Mountain.

A jink to the north west past worried wheatears avoided some cliffs and brought us round to Sron Tairbh, for our final 400 metre ascent of the day up to the summit of Beinn Heasgarnich.  The views were hazy but we were enjoying a fine day with high cloud, so we were very happy.

Here's the view north to Beinn a Chreachain. 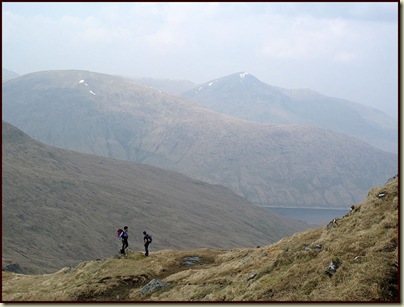 The hillside was blanketed with the small creeping flowers of purple saxifrage. 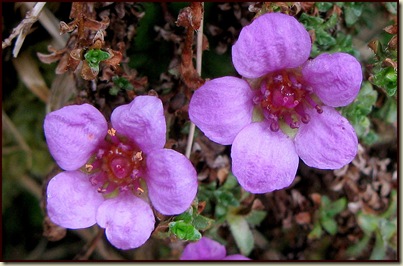 Lyn was especially happy as she tramped easily from Stob an Fhir-Bhogha to the summit. Photographs were taken with a fine mountain backdrop.  The sky was quite lively - it was raining nearby, but we stayed dry. 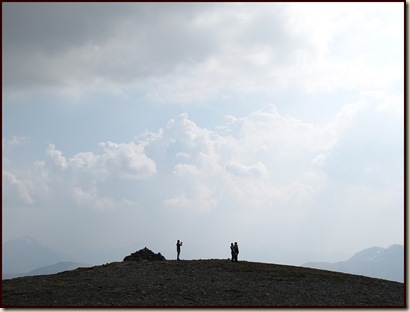 From here we enjoyed a rough 4 km descent to pick up a surfaced road near Lochan Learg nan Lunn for the final gentle road walk to Kenknock.  This section brought our only encounters of the day - a lone woman slogging up the boggy slopes of Coire Ban Mor (good camping here), and Al and I briefly overhauled a couple who had been a short way ahead all day.

Here's our route for the day - 22 km with 1400 metres ascent, taking just over 8 hours.  There's a web page here, giving links to a route card and to details of a walk over nearby Meall Glas and Sgiath Chuil. 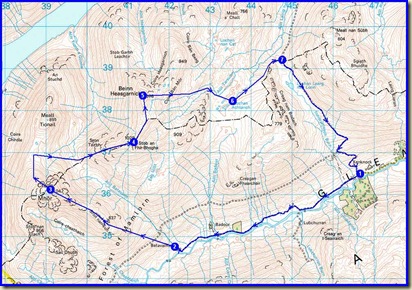 The Killin Hotel served us well last night - a good meal in pleasant surroundings with attentive service.  But the Ossian Ale was not able to 'settle' in time for us, so a selection of bottled brews were tested.

Sunday dawned rainy.  Plans to conquer Meall Glas and Sgiath Chuil were abandoned in favour of the straightforward plod up and down Ben Challum.  Julie and Dave inexplicably bottled out of any perambulatory activity.  So the four of us found ourselves in a layby beside the A85, 200 metres below the cloud base. 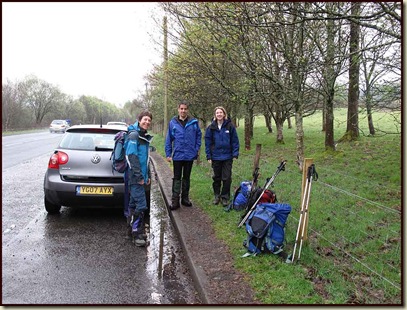 The cameras didn't come out much today.  It was raining.  But 11.00 am doesn't come and go without a tea break and a bit of posing from my three cheery companions... 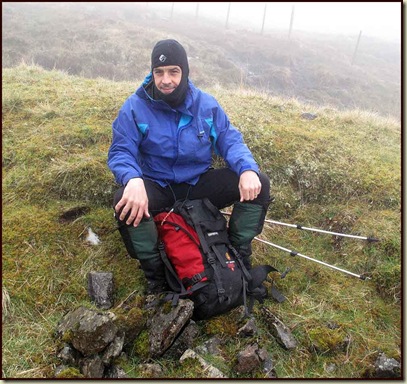 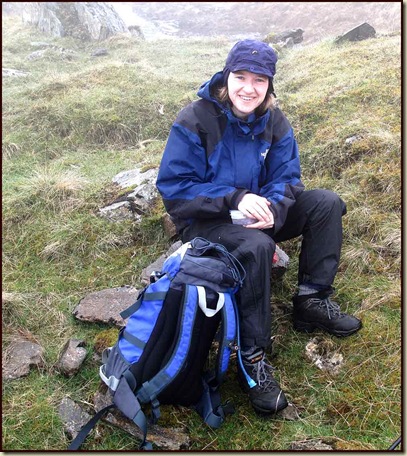 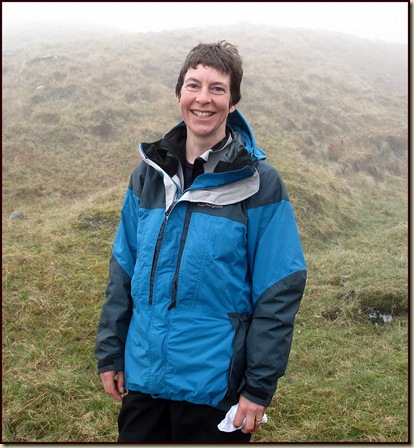 After that a couple of folk with a dog flew past as we laboured up the boggy hillside to reach the cloudy summit of Ben Challum (1025 metres) after three hours.  We passed them in a yellow shelter but our own blue shelter wasn't quite needed, as we found a spot to enjoy our lunch out of the wind in a gully between the two summits.

Lyn was going well today, despite warning us that she may seize up after yesterday's exertions, and everyone skipped happily down the hillside to enjoy views below around 600 metres.  Here, Kirkton Farm lurks below us. 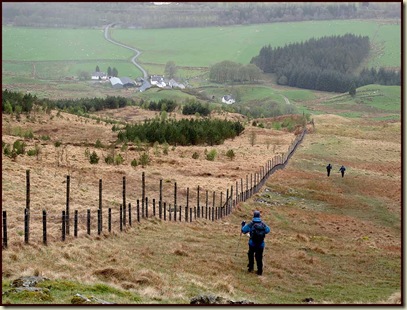 Next to the farm is the site of St Fillan's Priory.  The ruins of this Augustinian priory, currently nestling under a blanket of lesser celandine, date from the 13th century.  Robert the Bruce endowed the priory in 1317 - it was a magnificent building over 50 metres long in those days. 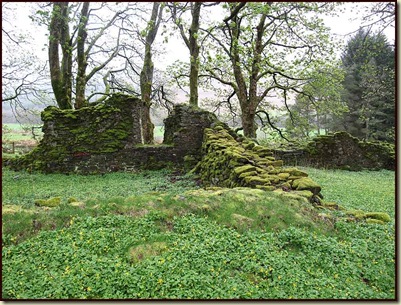 Next to the priory is a graveyard that dates back to the beginnings of the early Celtic church in the 8th century.

This is the land of Fillan, an Irish missionary who travelled on foot between Tyndrum and Killin, covering the same ground as modern day West Highland Way walkers.  He came to spread the teaching of a Christian way of life to the Scots and the Picts.

Did he succeed?  Well, the priory was built in recognition of his teachings, which following his death led him to be made a saint.

Five hours on the hill was quite sufficient for this inclement day.  We were happy to finish our stroll at around 3 pm, giving us plenty of time to adjourn to the tea shop in Tarbert before depositing Lyn at Glasgow airport and tootling back home in time for tea. 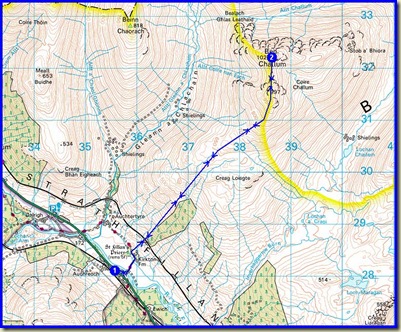 Some 50 images from this trip have been uploaded to Picasa and are available as a slide show by clicking here.

Posted by Phreerunner at 15:49 No comments: