There’s been a pause on these pages. The lurgy that Sue suffered in Poland passed to me, and without the benefit of antibiotics until yesterday, I’ve not felt well enough to write a report on the Polish loppet, let alone create any new postings since ‘Picture’.

Just before I took to my bed, Cary (veteran of our Apennine and Austrian hutting trips) was at our house and wondering how I created mobile postings. ‘Picture’ was my demonstration of how to create a posting in about half a minute. It’s a simple email to the email address of this ‘Blogger’ blog. Apparently there’s an ‘App’ called ‘Bloggeroid’ that allows images to be inserted within the text, rather than all appear at the top of the posting as per my method of ‘mobile’ postings.

I do hope Cary doesn’t get this bug, as he is due to set off on a Lizard Point to Dunnet Head walk on 25 March. Good luck Cary. He can be followed at ftb2t.blogspot.co.uk and I’m sure he’ll appreciate all the support that he can get.

Meanwhile, on Saturday Sue was well enough to pop down to Wythenshawe Park for her 100th parkrun. She’d baked lots of cake, so she had to go. She is seriously tackling her Achilles problem, which means no running for a while. So her role as volunteer ‘Tail Walker’ was eminently sensible. The top image is an early Tail Walker’s view on the first loop of the new ‘Flag and Sandcastle’ course.

Below, Richard sprints past, lapping the Tail, and below that – others splash past at a more leisurely pace. 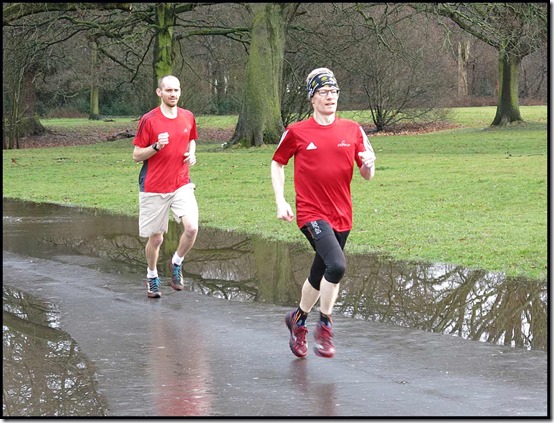 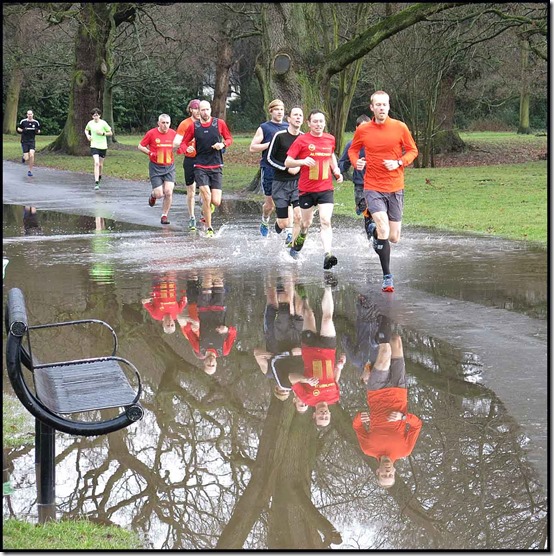 I’d hoped that Sue would provide a ‘cake’ picture, but it seems that by the time she had strolled home in rather less than an hour, some 159 other parkrunners had snaffled most of the flapjack, chocolate caramel shortbread, and lemon drizzle cake that she had provided. I was sorry not to be able to share it.

Anyway, that should bring readers up to date. I’ve had to abandon plans for a weekend in Snowdonia this weekend, but Sue is still going, and if I’m feeling any better I may get around to doing that Polish loppet report.