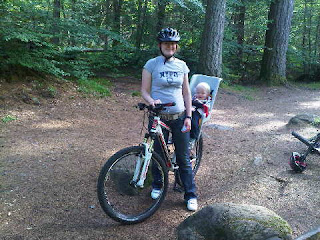 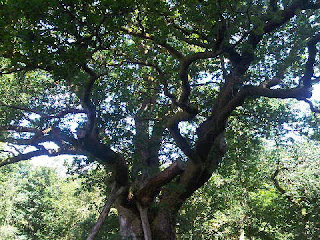 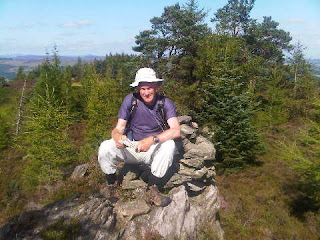 First, an experiment with young Jacob Milnes, pictured (top) in a new form of transport on the back of a bike. A qualified success - his helmet was rapidly ejected, and he wasn't too keen on the bumpy trail back from The Hermitage and a 'hide and seek' cave.

Next, a visit to Birnham via the Birnam Oak (middle), an ancient tree that students of Shakespeare may recognise from the tale of Macbeth.

Lots of wild flower photos were taken on the way back via latte and 'Rocky Road' in a convenient bakery. These will feature in a forthcoming slideshow.

The flower pictures are mainly for Dave, who joined me this afternoon for the ascent of nearby Newtyle Hill, via a 13 km circuit. On the ascent, a walk along an access track to a mast afforded Dave as stunning a view of Dunkeld and the Tay valley as he has had in 20 years of visits. That was followed by an hour or more of the most extreme 'heather bashing' he has endured in those 20 years, as we hauled ourselves up to the 317 metre summit and down towards Loch of Lowes to the north. It's not a big hill (I'm pictured on the summit), but it tries hard to be!

After 2 km of energy sapping bashing through deep heather, bracken and bog, we regained the well maintained footpaths that led us to the north of Dunkeld and back home via a picturesque lochan.

It has been hot and windless today. Trouser legs were needed only as tick protection on Newtyle Hill. The air is as clear as you could wish for. All in all, ideal for a brief family holiday up here.

Sent using BlackBerry® from Orange
Posted by Phreerunner at 22:19 4 comments:

Tayside and a stroll to Loch Ordie 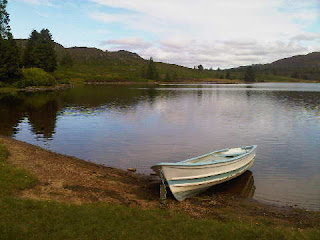 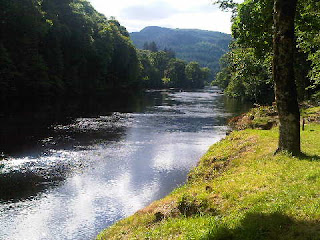 Last night you could see the hills, perhaps Ben Lomond, far beyond Glasgow from Beattock summit, many miles away. It was magically clear.

Sadly Sue had been prescribed 'rest' after her exhausting E5 trip, so she was at work generating funds for the next trip.

Luckily, the clarity of air remained today for a 24 km (15 mile) stroll with Dave and Ollie. A lovely route from Dunkeld to Loch Ordie (top), unfortunately missing the faint path that would have led us up Deuchary Hill. That'll have to wait until another time.

The walk around Loch Ordie was a delight, with both Bell Heather and Ling now in bloom, adding colour compared with the sights we enjoyed in Scotland in May and June. There was lots of bird life, including Ospreys and Red-throated Divers, and a plethora of Highland flora.

We returned via the lower path to Mill Dam, having taken the upper track on our outward tack, turning right to go past Rotmell Wood and return through cooler woodland to our lodgings on this beautifully warm day.

Where have all the midges gone?

None were in evidence on our walk, or on a later jaunt beside the River Tay (bottom) when we found a need to go to town to replenish our 'medical supplies', being as it was thirsty work today.

The paths were dry and quiet, with just a few other walkers and a handful of mountain bikers enjoying the perfect weather.

Sent using BlackBerry® from Orange
Posted by Phreerunner at 22:10 3 comments: 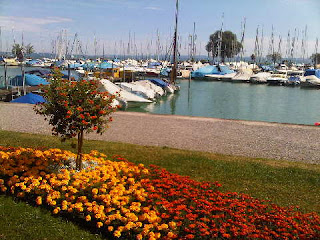 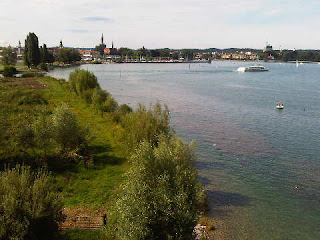 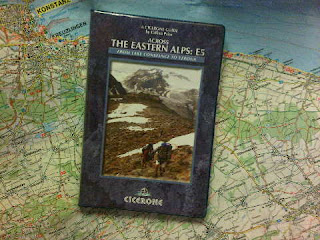 Rain splattered against the shutters as we rose for yet another lavish breakfast. At the time it looked as if our 'walking in rain' statistic could more than double today, but by the time we set off at 6.45 it was our five litre drum of suntan cream that needed to be wrung out.

It proved to be quite a long stroll to Constance, mostly on lakeside walking paths. A very popular separate cycle track runs either next to or slightly inland from the walking route, conveniently separating us from the cyclists for most of the day.

Views ranged from the beech lined woodland (we passed through an arboretum at one point) that has often featured on this trip, to inland villages across the lakeside railway line, and beyond well manicured gardens and regimental moorings for sailing boats (pictured) to distant peaks glistening in the sun.

We tried in vain to identify the high ridge we traversed a few days ago before descending to Lingenau, but never mind, the day was stunningly clear with fine views across the lake and back to the mountains.

Lunch was enjoyed at one of the many campsite restaurants dotted beside the lake. Then, at 2pm, a large black cloud suddenly formed, stopping us in our tracks outside a conveniently placed café when it decided to dump its contents. It would have been annoying to have received a soaking for the final two hours of the walk, but thankfully, when we looked up from our empty glasses half an hour later all was well with the world and the risk of sunburn was higher than that of a drenching.

We pushed on past a second 'Seedorf' to Kreuzlingen, our final objective, Constance (Konstanz) never being mentioned on the signage as it is back over the German border. Good news for us as prices are cheaper in Germany.

A millennium tower at Kreuzlingen afforded views over the lake, back to the mountains, and onwards to the pleasant town of Constance (pictured).

We slowly shed the lakeside cyclists and joined the day trippers in this pleasant town. Our central hotel overlooks the lake (beyond the railway station) and is situated above a McDonalds. Not much further away, however, is Hafen Halle, the restaurant recommended by Nick. And very good it was too. Thanks Nick.

It was a lovely evening on which to finish, with the late light drawing one's eyes towards the Imperia, the voluptuous rotating oriental lady at the mouth of the harbour, erected in 1993 to commemorate the religious unification brought about by the Council of Constance that took place between 1414 and 1418.

There will be more on this trip in due course - index, gear notes, slideshows, etc, but that's all for now as we set off on what we hope will be an uneventful journey home.

Patrick - thanks for your comment, I've enjoyed making the postings despite the dodgy keyboard. Sorry if they were a bit wordy at times, but that's the nature of the beast.
I suspect there need to be a lot more sales of Gillian's book before Cicerone would consider a second edition, and the route variations and adjustments are not really rocket science to achieve. The main constraints are the areas covered by the Kompass strip maps, and the alpine ability and confidence of those seeking alternatives.

Gillian - your book (pictured) proved a welcome and informative companion. Thanks for the inspiration for walking this excellent route.

Alan R - we'll bring a bigger box of washing powder next time, and all the wringing has ruined my socks!

Gibson - thanks, and I hope the weather's good up your way.

Gayle - we love the Alps, but the walking season is short so the trips just have to be crammed in...

Kate - we are glad you enjoyed some camping. Some statistics from our walk are below - it was about the distance from your house to Edinburgh and back, plus a vertical ascent (not all at once) from your house to beyond the centre of Manchester.

Everyone else - thanks again for your comments, they have entertained us throughout the trip.

Flower of the Day - Teasel - one of numerous lowland meadow flowers seen on the last stage of the journey, and a taste for what we'll find at home. 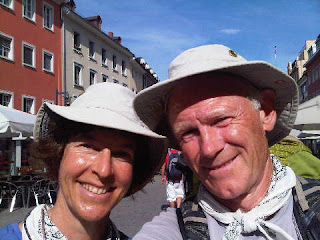 Here we are in Constance, in the sun as usual, after a successful five weeks and two days on or near the E5. A great trip. Today's report will follow.

Sent using BlackBerry® from Orange
Posted by Phreerunner at 16:29 5 comments: 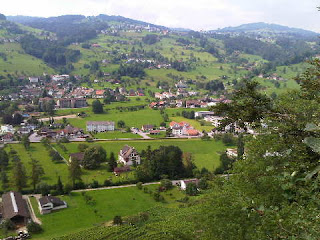 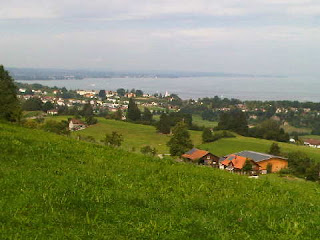 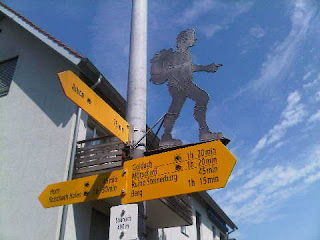 Winding down? It didn't really feel like it! With no proper break for two weeks, and in temperatures consistently approaching 30C, the journey remains quite hard work.

After breakfast with Markus, he dropped us off at Rheineck on another warm, sunny morning.

Thanks Markus for looking after us and ferrying us around, and thanks Wolfie and Jutta for letting us stay in your flat.

"Have you used your compass?" Markus had asked. He'd been surprised by how often we had used it, usually for 'comfort' that we were heading in the right direction. We should have used it to navigate out of Rheineck. Instead, we rambled around the old town and then headed off along the obvious road. It wasn't until a sign notified us of our entry into the village of Thal that we realised we'd taken the wrong road.

Never mind, pleasant footpaths guided us through the village to a steep set of steps that rose over 100 metres through vineyards to gain the narrow ridge that we should have ambled up from Buriet.

The residents could be accused of being lazy here. Lawns were being mown, but there wasn't a person in sight. They use automowers, huge mouse like gadgets that wander around a lawn, cutting it, and turning when they sense they have reached the edge. (Coming soon to B&Q, or are they already there?)

Easy lanes and paths wended their way to Goldach, where a handy corner shop provided the ingredients for an al fresco lunch on a nearby bench by a paddling pool sort of fountain. A couple entertained us by washing their Scotty dog by way of a ball game in the water.

Easy paths then led us past greenhouses full of tomatoes and cucumbers, and through orchards brimming with ripening apples, plums and peaches, and rows of harvested cherry trees.

Several narrow gauge railway lines were crossed today. They reminded me of the wonderful model railway that I used to take the children to at Carnforth.

Black kites soared overhead - we saw lots of birds of prey today. Some cyclists passed, and we heard murmurings about E5, which gets no mention on the walking signs hereabouts (pictured, bottom).

The lakeside at Arbon was a busy spot, with cliques of grebes and mallards vying with black-headed gulls for the best positions on the lake.

After an ice cream interlude our B&B, Garni Sonnenhof, was located and Sue was despatched to collect provisions for dinner whilst I recovered from the trauma of impersonating an overweight pensioner for yet another day.

Dinner was by the lakeside on a bench (we used a few today) and was an excellent alternative to a pricey Swiss meal.

We dashed back just before the rain hit, and in time to watch GB athletes win three athletic golds in the olympics, where the local coverage seems to have moved from German fencers to Swiss triathletes.

Only spam. I've deleted it. Remember - don't click on any link inserted in a comment unless you are confident that it is bona fide.

Data:
4 August 2012
14km in 5 hours with 300m ascent
Flower of the Day - Narcissus-flowered Anemone (from the Lechtal holiday, since alpine flowers aren't in evidence down here at 400 metres)