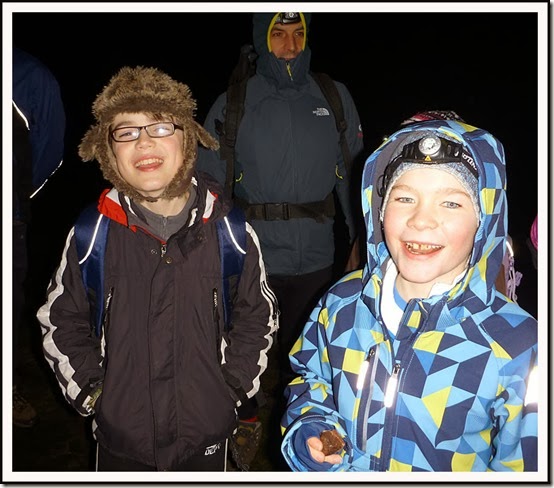 This was what has become a ‘traditional’ pre Christmas romp up to the summit of Shutlingsloe, which is usually a bit breezy on top, but not sufficient to deter us from supping some hot drinks and handing round some cake before heading back down to Trentabank, and thence to the Leathers Smithy for a beer.

Tonight was one of the best we have had, both turnout and weather wise. Thirteen of us on a lovely moonlit night, so torches were completely superfluous.  Views from the summit extended over the whole of Greater Manchester to Winter Hill.  Children who used to whinge a little sprinted ahead, separating the group on descent as only the fittest could keep up with them. Well done, Andrew, Kate and Joe, and it was good to see my nephew Toby turn up from near Nantwich, and Graham B’s granddaughter was also most welcome.  I hope she enjoyed it.

Altogether a very enjoyable and sociable little excursion, and there’s not much more to say, but below the photos which follow, by popular request, I’ve added a summary of the walks which have led to this minor event becoming a ‘tradition’ amongst a small group of family and friends. It’s interesting to see that people have only started to turn up in good numbers since I upset them by changing a venue that they had got used to seeing on the programme but until then hadn’t bothered to come along. The first of these evening walks up Shutlingsloe was in 2006, when Sue and I were joined by Andrew and Sheila. Only Andrew and I have attended all eight of the walks, and I’m amazed by the short period of time required to create a so-called ‘tradition’. 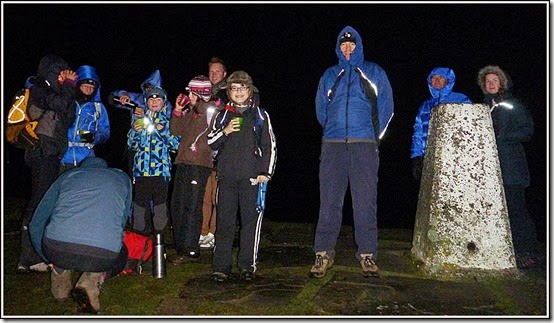 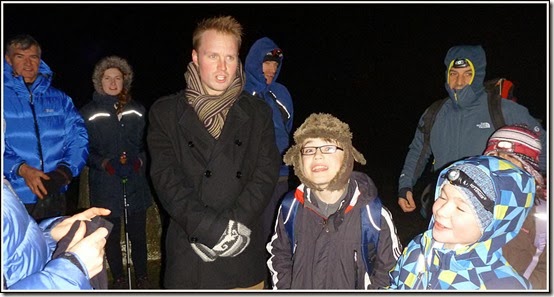 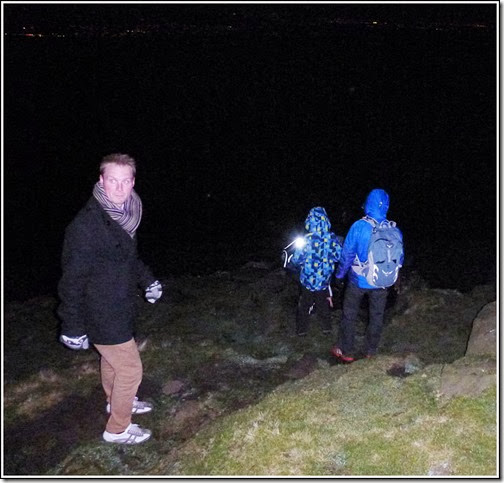 This lower picture shows my nephew in his best walking gear, about to slither down the hillside, with Greater Manchester’s backdrop of lights just coming out at the top of the picture.  Extremely inexpert night photography on my part as usual.

17/12/2013 – 13 attendees, clear, calm and cool at Trentabank, ground frost higher up making the rocks and grass a little slithery.

20/12/2011 – 17 attendees, calm, cool and misty on the summit.  I’d tried to break tradition by changing the venue to White Nancy, on 9/12/2011, when only three of us had attended, and a rebellious element had insisted on going up Shutlingsloe ‘as usual’.  I was chastised for breaking with tradition, but it did give me a chance to write about the history of White Nancy.

[Hover mouse over the type in black, and click, for the links to reports.]

Bet you were glad it was Tuesday and not Wednesday night. What a difference a day makes.

Perhaps there were other walks pre 2006, not recorded here, that led to the second outing in 2007 already being called 'traditional'? Happy Christmas all!

It was the SWOG Christmas party on Wednesday - luckily in the Grapes, not up Shutlingsloe (great food, Pam) - so we weren't really bothered. But you are quite correct Alan.

Nick - I think the tradition mentioned in 2007 probably referred to the tradition of a Christmas walk, rather than one up Shutlingsloe, as before 2006 we did organise a similar outing each year, but usually based on the Bridgewater Canal and Trans Pennine Trail paths near our house. Mince pies may have featured...