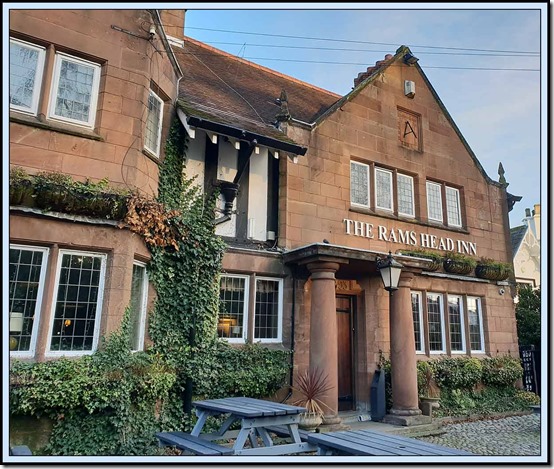 This was the last of the current programme of Friday morning strolls. Sue and I scraped the frost off the car and took a short drive to Grappenhall, where we parked behind the Ram’s Head as per instructions (albeit my own instructions).

Soon after setting off on the walk, a phone call was received. A plaintive message from Paul, Pete and Kate the dog. They had gone to a different car park. It was a surprise to see Pete at all, as he lives in Bath and isn’t on the circulation list for these walks. He had picked up the details from topwalks.com – I usually put details of such walks there. Must plan some for 2019!

So after the false start, we set off again past the Parr Arms, on an adaptation of a route suggested by Jen Darling in her ‘Walks in North Cheshire’ book. 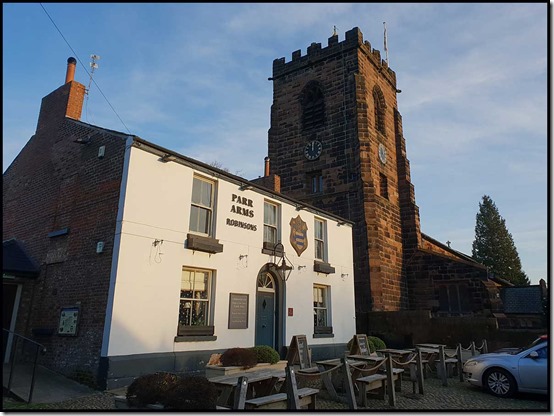 St Wilfred’s church is known for many interesting features, including a black cat sprawled along the tower’s outside wall. It is reputed to have been Lewis Carroll’s inspiration for the Cheshire Cat. Can you spot it here? 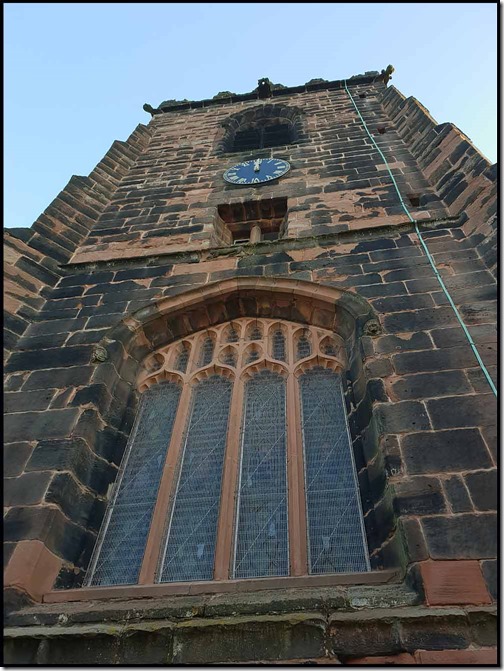 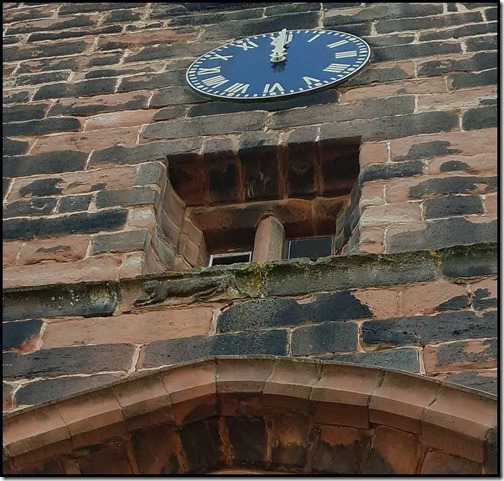 The village stocks. If only they could talk… 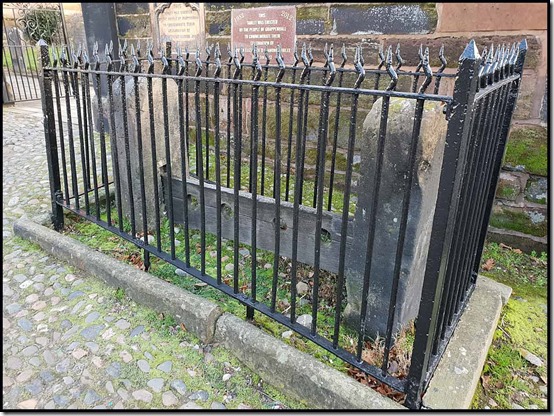 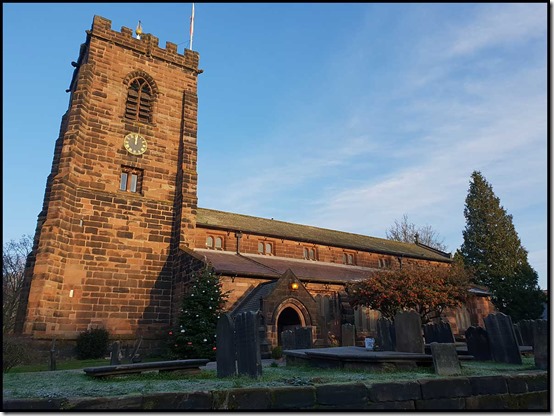 We were soon marching across fields to Broad Lane, where Andrew made a brief appearance, dressed up as an old tree stump. He wasn’t as chatty as usual, and actually seemed rooted to the spot! 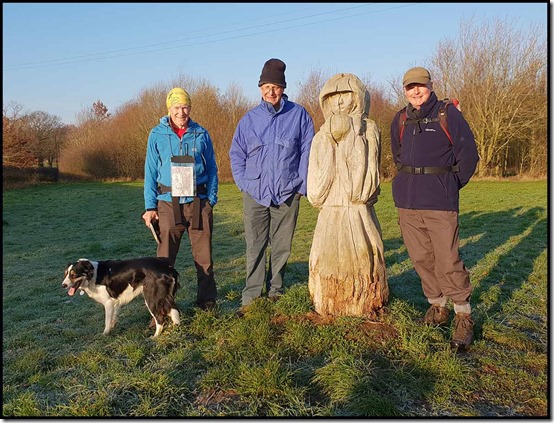 It was a pleasant enough route to join the Bridgewater Canal towpath by the London Bridge hostelry, albeit I failed to find the path through the Dingle, so there was more tarmac than intended. The mapping software for my new phone is harder to use than that on the old phone. A familiar problem, it’s really just that I haven’t mastered the new software – I’m struggling in particular to apply a route line that’s wide enough to see without a magnifying glass. 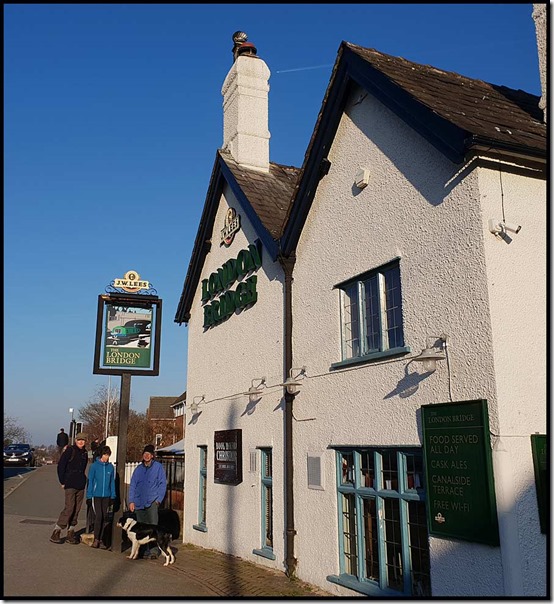 As you can see from the previous picture, it was a lovely morning for a stroll along the towpath in decidedly wintry surroundings. There are very few leaves remaining on the trees. 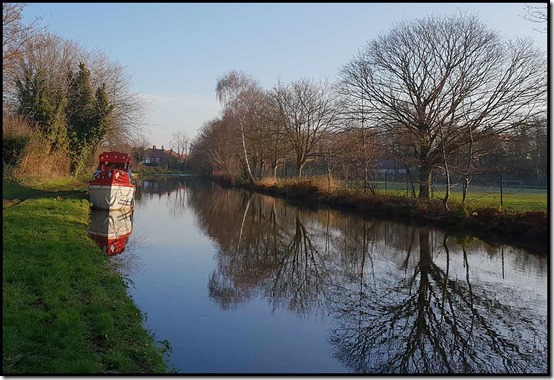 The Ram’s Head provided the slowest coffee we’ve had for a while, but it was pretty good coffee when it eventually arrived, garnished with a mince pie.

Here’s the route – 10 km with minimal ascent. It took a shade over two hours. You are welcome to follow it, but you might like to try the ‘Dingle’ path as an alternative  - if you can find it. 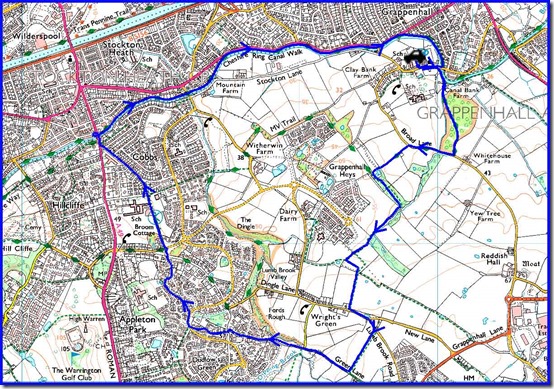