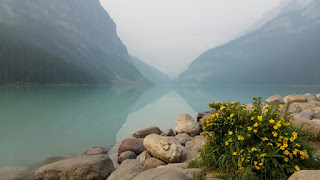 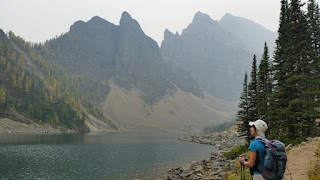 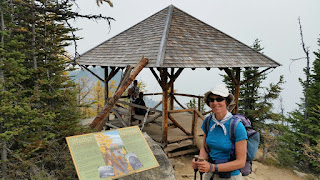 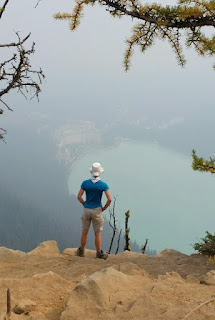 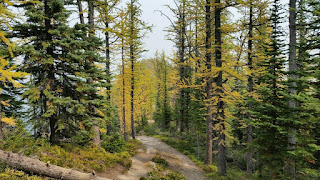 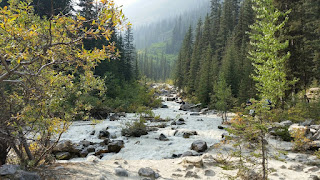 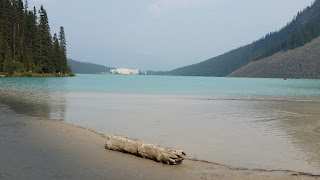 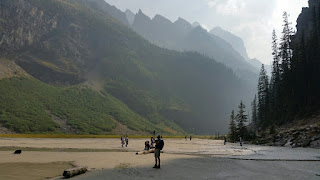 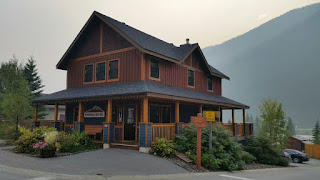 After another nice lie in we breakfasted and packed up fairly quickly, with no condensation at all on the tent, and were on our way by nine o'clock.

We drove back up north to Lake Louise, to where we should have been travelling south today. About an hour on the boring tree lined highway.

Skirting the town of Lake Louise, we headed with lots of others up to the eponymous lake. It was crowded, with a dreadful huge building at the end of the lake, views from which provide the cover photo for many a Canadian calendar. Today's view is the first picture above.

With no convenient café for elevenses we ate our remaining biscuits and joined the hordes on their pilgrimage to Lake Agnes, passing Mirror Lake on the way. Whilst the yellow sun was trying its best to cast a shadow, the yellow of the turning larch leaves seemed vibrant in comparison. It was a dusty trudge through trees with no views for a procession of glum walkers.

Near Lake Agnes we came across a casualty who had tripped on a root and bashed her head. She was being looked after, just awaiting a helicopter. That duly arrived as we reached Lake Agnes, spattering everyone with dust and spray as it landed at the end of the lake near a rather twee teahouse. It was very crowded. We went inside. £10 for a pot of tea. We left. We stuck with our water bottles today.

Most people turn back at Lake Agnes (second picture), so the path around the fish filled lake and up a well graded zigzag to a col was much quieter. The helicopter took off and landed three times during the course of the rescue. It was still in evidence when we reached 'The Big Beehive' an old pagoda on a promontory. We lunched just below this structure. Our lunchtime view is shown below that of the pagoda. An information board told us this was 'Wilcox' territory. We keep coming across this Wilcox man. But the shelter was apparently built by the Canadian Pacific railway in 1916. You can hear the trains far below. Some spots of much needed rain came to nothing.

Sue then fancied a scramble up to somewhere called The Devil's Thumb, so I waited in a comfy spot near the col whilst she did that. My view of the larch forest from where I waited is the fifth picture down.

We chose to descend by the Highline Trail. Very pleasant and quiet it was too. It took us into open country with mountain outlines in view. I'm told there were some glaciers at the head of the valley.

Eventually we reached the river that flows from an alleged glacier into Lake Louise. Sixth picture, and imagine the pleasing sound of rushing water to go with it.

Soon we reached the edge of the lake, and lots more people. The view from there is shown in the seventh picture. The big building at the end of the lake is said to resemble Colditz. It's an ugly chateau that was used in World War II, to 'house' (ie imprison) all Canadians with a Japanese heritage. They now flock to this monument of suffering and pay a minimum of $450 for a double room!

It reminded us of a (very) poor man's Lago Misurina, near Cortina.

The penultimate picture shows the view back to the allegedly numerous glaciers from the same spot.

After arriving back at the car park, we managed an incident free short drive up Highway 1 to the village of Field, where we are happily installed in the Fireweed Hostel (last picture). It's just like being at home, and nice to have a bed after ten nights in the tent.

We've been yearning for Manchester's relatively clear air today. Whilst the locals here are sympathising with the tourists, we can only sympathise with the locals who have to put up with a smoky atmosphere, and for some towns and villages a complete evacuation from their homes, for months on end. Unfortunately we have pre-booked accommodation in this area for the next 12 days, so we can only hope for rain and a change in the wind direction.

One of our guidebooks is called 'Don't Waste your time in the Canadian Rockies'. "That's ironic" observed Sue, "the next edition will be much thinner and subtitled 'Go To Europe Instead'."
Posted by Phreerunner at 03:32

I hope you will do a summary at the end of this trip - it seems to be such a mixed bag. Fantastic scenery, but marred by the smoke, and regimented access.

Yes Conrad, I'll try to find time to do a summary. I think the weather is in the process of becoming more autumnal.