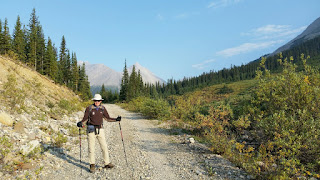 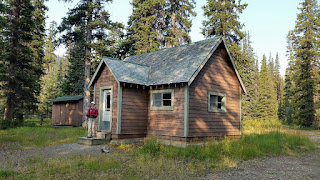 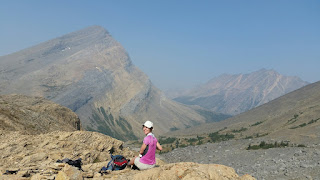 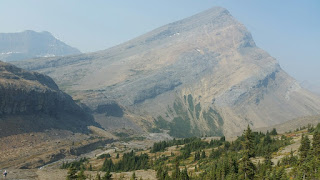 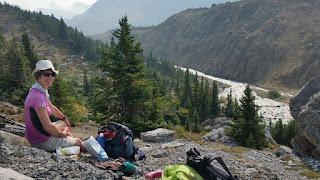 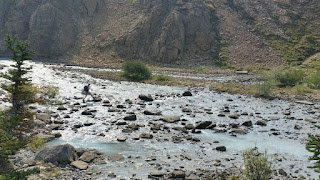 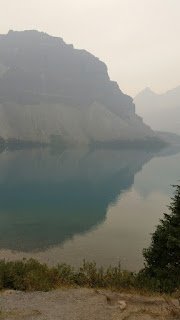 Nigel Pass and an unexpected visit to Banff

We were up and away from the campsite quite efficiently and were parked just down the road at the Nigel Pass trailhead by nine o'clock. This was to be a largely valley walk at the edge of the tree line. That limited our views to the mountains very close to us, which was just as well as the smoke was concealing everything else. From the pass we could just about make out the outline of Parker's Ridge, some 10 km away.

The route started along a track on which I'm pictured. The gloves, fleece and trouser legs were soon discarded. Some animal with diarrhoea had spread its scat across the track. It must have over indulged in red berries.

A group of five people, the only day walkers seen, passed us near a clearing which is the site of an early Park cabin. (Second picture.) It was locked, unlike the small thunderbox nearby with a lady stenciled on the back. I later found that very useful.

The good path rose gently through mixed woodland then a sanctuary of willow and an assortment of berry producing bushes. Sue distracted the wildlife with frequent shouts of "Hello Bear". We met two small groups of backpackers finishing a four day circuit. Later we chatted to three more who were starting the circuit. Were we envious? Well, we had tried to get backpacking permits for some routes back in May, but the quotas were full, so we decided to bring a bigger tent on this trip and do day walks.

Yes, we were very envious. We consoled ourselves with a chocolate muffin.

However, today's walk was a good one. The third picture shows Nigel Peak, with the pass showing in the middle distance atop some reddish rocks. The next picture shows Sue on the pass, our high point of the day at 2195 metres. There was a nice cool (if smoky) breeze.

From there we dropped down to cross the milky blue Brazeau River and continue on through an area like Dolomitic scree towards the first of the backcountry campgrounds that the backpackers use. You can't just camp where you want, and it's difficult to go anywhere other than on a recognised trail. Perhaps that's why some Canadians struggle with the TGO Challenge.

The fifth picture shows the view of the Brazeau River and Nigel Peak (presumably named after someone called Nigel) from the furthest point we reached before turning back towards the higher reaches of the river. The sixth picture sees us enjoying lunch before the river crossing (next picture) with a backdrop of smoke engulfed mountains.

From there we enjoyed an incident free stroll back along our outward route, encountering the aforementioned three backpackers and numerous squirrels, pika, chipmunks, small birds, etc - but no bears despite Sue's frequent greetings.

18.5 km, with 500 metres ascent, in 6 hours.
So, after our pleasant six hour walk we returned to Charlie for what should have been a scenic 60 km drive to Waterfowl Lake campground. This turned out somewhat differently. Forget the 'scenic' bit. What followed was a long, boring drive along a tree lined road at a speed limit of 90 kph which everyone seemed to be ignoring despite stories of whole processions of vehicles being frequently pulled over for speeding. Occasional outlines of mountains could be seen beyond the fir trees. Waterfowl Lake campground, from where we had planned what on paper was an excellent walk for tomorrow, was closed due to the risk of fire. 20 km further on we stopped at Bow Lake for the only view we got on the entire journey. The bottom picture, into a weak yellow sun. Another 23 km and we stopped at Mosquito Creek campground. Full. The campsite at Lake Louise had bad reviews, so we continued, now on the Bow Valley Parkway after the Icefields Parkway terminated at Lake Louise, to Protection Mountain campground, some 40+ km on from Mosquito Creek. Closed. Back to the huge campground at Lake Louise. Full. Our only option now was to head a further 60 km, along another horrible tree lined road with no views, to Banff, where a patient time in a long queue at the 618 site Tunnel Mountain Village 1 Campground yielded a position for us at 'J3' that we gratefully accepted. By now we'd driven about 220 km rather than the anticipated 60 km, and had spent three hours longer than planned in the car. We had limited time before darkness fell, so I put the tent up and Sue saw to dinner. By 8.30ish it was dark and we were resting in the tent, which despite appearing to be in a forest is next to a main road and a railway line. We will just have to put up with the noise.
Posted by Phreerunner at 18:33

I see you continue to be blighted by smoke and also that you "liked my pic on the Alaska cruise. Is it too late to head back to Vancouver and look for a last minute cruise deal. Plenty of opportunities to do active things on shore. Lucy would be your help and she has an excellent travel agent. Just a thought. Love Helen.

Thanks Helen. I think the smoke is just as bad in Victoria. Anyway we have accommodation pretty much fixed for the rest of the trip so we'll just have to make the best of it. It rained today (Saturday) so that may help.