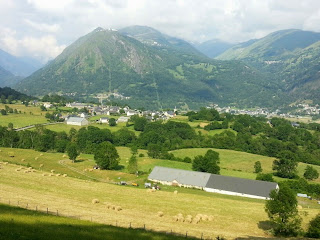 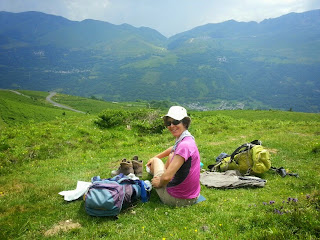 After the excitement of the snow laden Néouvielle area (see yesterday's image), today was a short, pastoral, outing.
Breakfast was taken in a nearby boulangerie. Not having seen anyone English for a couple of days, we invited JJ to join us. Sadly he declined, blaming the lack of a shaving incident.
Whilst it appeared cloudy when we looked skyward, we spent almost the entire day under a burning sun. It was very humid. Drippy weather. And it dripped from above during a refreshment break in Loudenvielle, and after we had arrived here at the Auberge de Germ at 3.30pm. So we were lucky with the weather today.
We'd stocked up before leaving, so after the long ascent through ancient sunken byways - one of which sported a large and very stationary flock of sheep that blocked our way for some time - and overgrown woodland paths, with good views back to yesterday afternoon's descent (pictured, top), we were able to enjoy a baguette with sheep's cheese and tomato just beyond our high point of the day, Couret de Latuhe (1586 metres).
Eagles and red kites competed with paragliders for airspace above Loudenvielle. Luckily the airport at the resort above Germ didn't seem to be in use today. You can just about make it out on the lower image, taken at our lunch stop. To the left of the airstrip a dip on the horizon above Sue's head is the Col de Peyresourde, a Tour de France favourite and a pass that I once cycled over with a saddlebag and two panniers (all Karrimor) and half a Sturmey Archer four speed gear system. Memories!  My tent was a Karrimor Marathon - used on several 'Alpine' trips.
Anyway, our lunch spot would be a fine place from which to view the Tour, but this year we were just a few days too late.
Today also featured more scenes of devastation - in the Aure valley, as we passed debris strewn meadows and inundated homes.
The path down to Loudenvielle was teeming with scurrying lizards, and a rather shy large bright green specimen - about 8 inches long.
A lad passed us on the fine path up to Germ. Then, about half way along it, we met him coming hurriedly down.  "I've seen a snake" he exclaimed, explaining that it had scared him so he had turned back.
The Auberge de Germ is fine. Very quiet. Nobody else seems to be walking GR10, though it's possible that some folk may be at the nearby gite.
Sent from our GR10 trip - see here for our itinerary
Posted by Phreerunner at 17:52