A Circuit from Fuente Dé 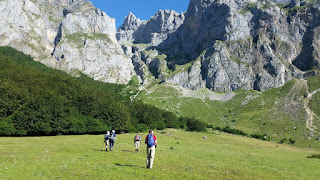 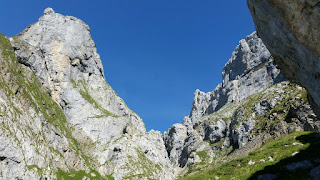 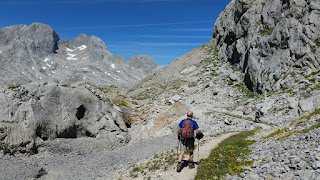 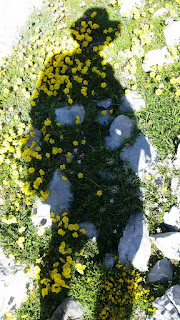 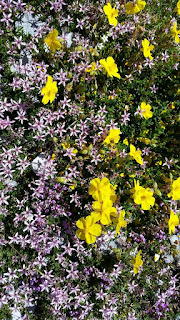 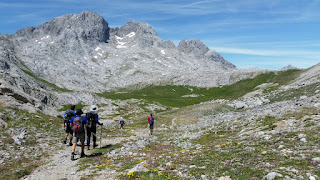 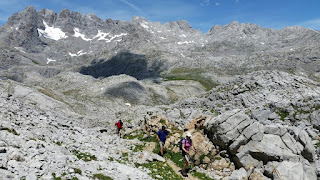 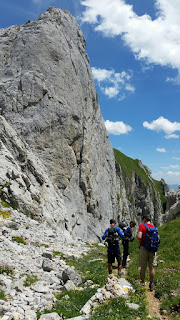 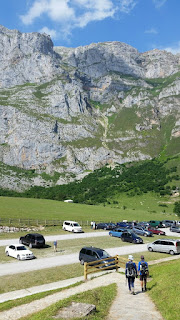 Today the fine weather held for yesterday's foursome plus Collett's Oscar and a new guest, Andrew.

Whilst 'our Andrew' enjoyed a shorter outing, the six of us spent 8 hours on an anti clockwise circuit of 14.5 km with over 1000 metres ascent. A fair proportion of the 8 hours, unlike yesterday, was spent on our backsides. Resting. Eating. While Sue took pictures of flowers, and chamois froliced on distant snow slopes.

Occasionally Griffon vultures soared overhead. A flutter of snow finches swarmed past at one point and choughs chattered on their training flights with their youngsters. Blackbirds sung melodiously and wheatears and stonechats worried about our presence on their patches.

The wild flowers were wonderful. They will be paraded at some point in a slideshow, but for the moment you will have to make do with the images above, which summarise the day as well as any words I could concoct after enduring a Brexit debate and a failed attempt to get interested in a football match.
Well done Andy Murray and Lewis Hamilton. We were lazing in the mountains whilst these two tried to relieve the continuing post Brexit depression.
Posted by Phreerunner at 22:57

No pictures of the cable car! Thats made me more depressed than a Brexit conversation.
Looks wonderful, i remember when i got to Fuente De that the cloud was down and the cables just disappeared into them.
As for the football, you missed nothing. A bit like watching Man City, ha.

The cable car is in the bottom picture Alan. That's the closest we got to it. Queues are apparently horrendous.